This week we are pleased to feature the third guest blog post from graduate curatorial assistant Kelly Fleming, who will be sharing selected treats from our upcoming exhibition, “Shakespeare by the Book,” over the coming months. The exhibition opens February 22, 2016.

Most readers of Shakespeare’s sonnets associate his poetry with love. In films and literary works of all kinds, Shakespeare’s sonnets are quoted and used to confirm the love between two people. Sonnet 116 (“Let me not to the marriage of true minds”) is probably one of the most popular readings on the wedding circuit. As much as Shakespeare’s sonnets are about love, time is more likely to be the subject of the poet’s meditations. The first seventeen—“the procreation sonnets”—urge a young man to make much of time, to get married, and to procreate so that he can live forever through his children. Many of the sonnets after 17 continue to address, to personify, and to apostrophize time, as these first lines illustrate: “Against that time, if ever that time come” (Sonnet 49); “That time of year thou mayst in me behold” (Sonnet 73); “No, Time, thou shalt not boast that I do change” (Sonnet 123).

Knowing the sonnets’ preoccupation with time, I completely “nerded out” when I discovered that someone had turned Shakespeare’s sonnets into a watch. My own scholarship has nothing to do with Shakespeare, but every time Molly, our curator here at Special Collections, mentioned the watch to me, I would get so excited that I would say in a high-pitched voice, “But Shakespeare’s sonnets are all about time!” I cannot imagine a more perfect way to represent his sonnets than a watch. 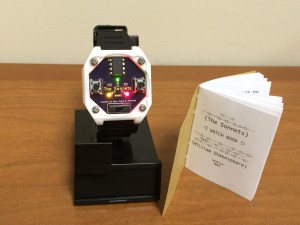 Pictured here is the watch with the instructional booklet open to the title page.

The Sonnets Watch Book is book inside a watch; it is a watch that ticks out Shakespeare’s sonnet 18 (“Shall I compare thee to a summer’s day?”) and sonnet 130 (“My mistress’ eyes are nothing like the sun…”) in Morse code. It was dreamed up and built by three Seattle teenagers (credited on the watch as “Alex, Clara, and Nicholas”) and published by miniature-book publisher and technologist Robert Orndorff (who happens to be the father of two of the makers). Only eighteenth copies of The Sonnets Watch Book are in existence and number eighteen will appear in our exhibition. Bright lights flicker out the letters and punctuation marks of each sonnet. Even though I can’t understand Morse code, there is something incredibly moving about watching the lights change and knowing that Shakespeare’s words are still slowly being repeated throughout time. 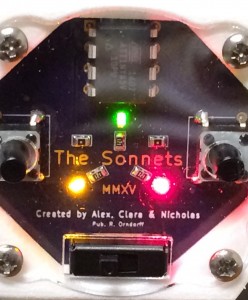 Here is an image of the watch as it ticks out one of Shakespeare’s sonnets in Morse code.

Last week, I spent a full hour close reading Shakespeare’s Sonnet 65 and talking about time with my ENGL 3810 students. We were stuck on the following lines for a while:

O, how shall summer’s honey breath hold out
Against the wreckful siege of battering days,
When rocks impregnable are not so stout,
Nor gates of steel so strong, but Time decays?

Shakespeare’s answer to this question is his sonnet. Unlike the sea, stone, or shining metals, his “black ink” may be able to withstand the rages of time. His “black ink” will continue to “shine bright” and tell of his love. As my students will tell you, this is exactly what happened. We spent twenty-five minutes of our class on four lines because his “black ink” does still “shine bright” in the history of literature.

Imagine, then, an object that literalizes the hope, the wish of this sonnet. Shakespeare’s words, his “black ink,” actually “[shining] bright” in little yellow, green, and red blinking lights on the face of a watch.

Now, who is excited?

Click on the link below for a video of the watch in action and proof that Shakespeare’s sonnets are now more portable than ever before. The Sonnets Watchbook will be on view—alive and ticking—in “Shakespeare by the Book: Four Centuries of Printing, Editing, and Publishing,” which runs February 22-December 2016 at the University of Virginia Library.

Oh, and in case you are wondering about the history of literature translated into code, perhaps you would like to see Monty Python’s take on the topic. They  start with Wuthering Heights and go on from there…make sure to stay to the end!: