This is the first in a series of three posts, spotlighting the mini-exhibitions of students from USEM 1580: Researching History, Fall 2015.

This semester marks the third time I have taught the University Seminar course Researching History. The course gives first- and second-year students the opportunity to immerse themselves in primary source research. During the class, my students had to navigate through the rich array of research materials held in the Albert and Shirley Small Special Collections Library and share what they learned in one-on-one sessions with their friends and family. Also, they each interviewed an author, who had used Special Collections materials to write his or her book. In their final projects, the students employed all of the skills that they had learned in the class to curate and present mini-exhibitions at their outreach program, Tales from Under Grounds III. U.Va’s new Provost Thomas C. Katsouleas even stopped by to see their impressive work. Students created their mini-exhibitions by illustrating a particular story with only seven special collections items of varying formats.

Note: only three selections per student are shown. 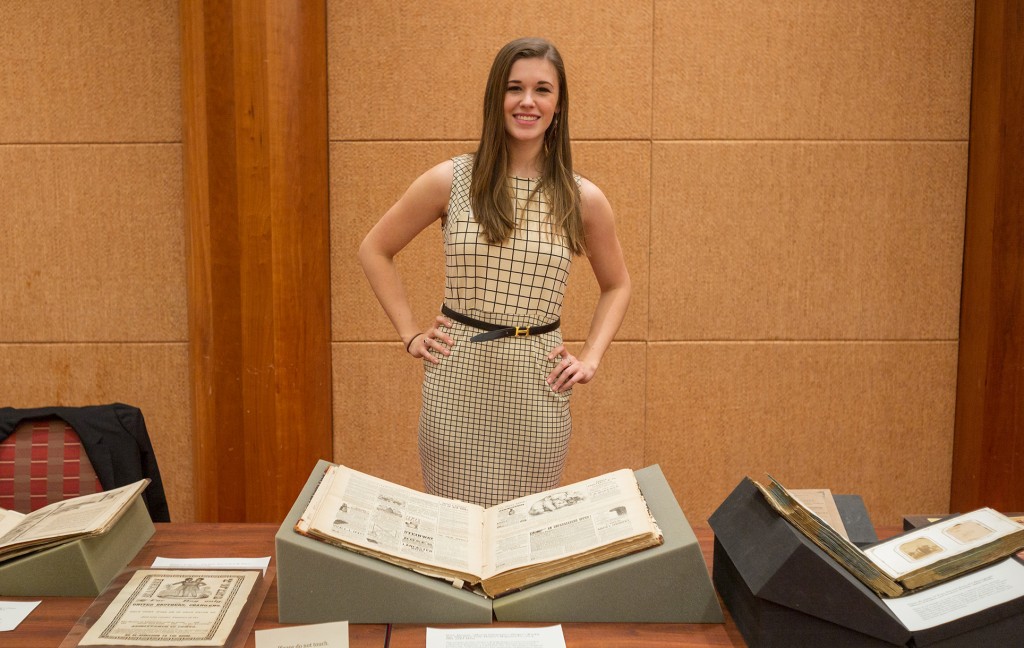 The Barnum and Bailey Circus is one of the most famous circuses in history. It’s proprietor, Phineas Taylor Barnum initially created a museum holding the world’s first aquarium and featured the world’s human oddities and his famous hoaxes. He later contracted with James Anthony Bailey to create the famous traveling circus.

Some of the most notable attractions were Tom Thumb, Chang and Eng, the Siamese Twins, and Jumbo the Elephant. Most of these acts are no longer a part of any circus routine. Slavery and racism were still prevalent in the 19th century, which shaped how the public accepted these acts. Barnum’s human acts were marketed as “freaks,” and exploited them for profit. However the success of the acts allowed some of the performers to end their circus careers quite wealthy. Barnum wrote, “Unless a man enters upon the vocation intended for him by nature, and best suited to his peculiar genius, he cannot succeed.” Was circus employment the designated vocation for these people? The acts were very lucrative for some performers, yet at the same time exploitative. 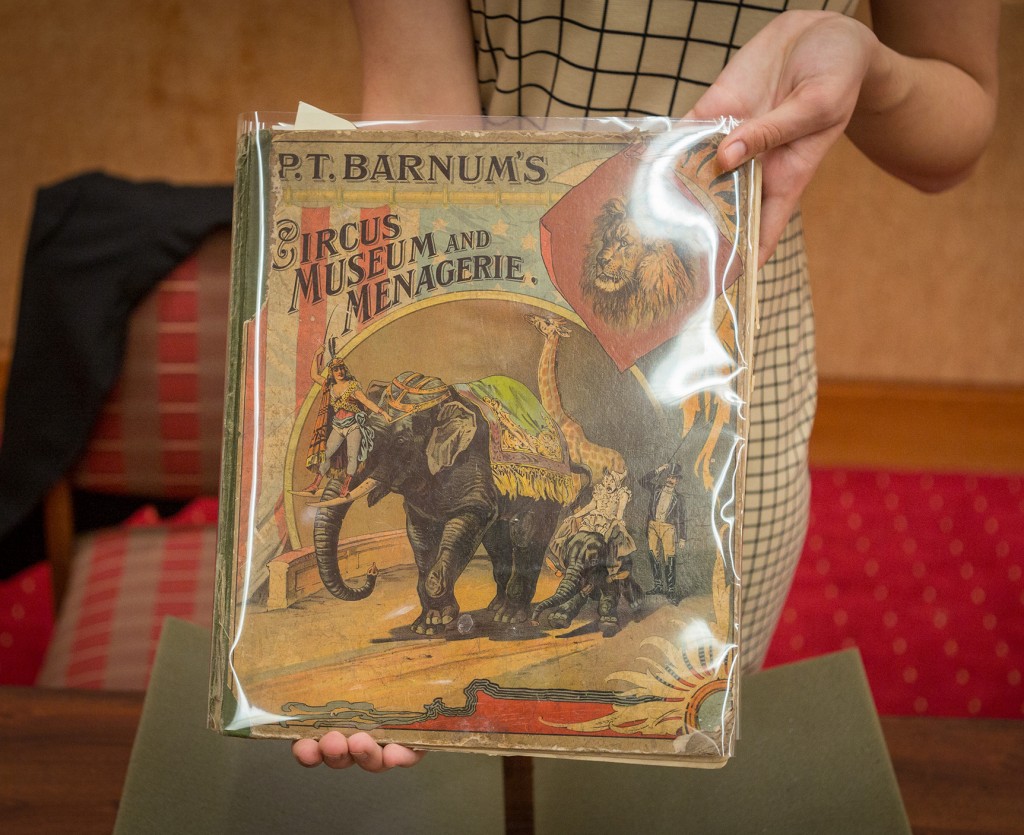 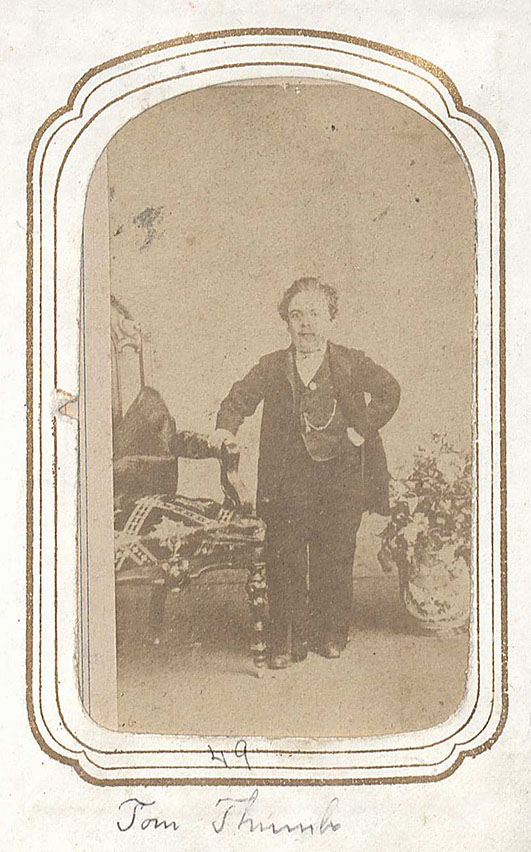 Carte de visite of Tom Thumb from the Photograph Album of Cullen and Graham Family. (MSS 14198).
Here is an image of Tom Thumb, a dwarf or little person, who was a very popular act in Barnum’s circus. Tom Thumb, originally Charles Stratton, was hired as a young boy to the circus. During his act, Tom sang songs or dressed up like characters such as cupid or Napoleon Bonaparte. After his circus career Tom married a woman who was a dwarf, and they lived quite comfortably. (Image by Petrina Jackson, December 3, 2015) 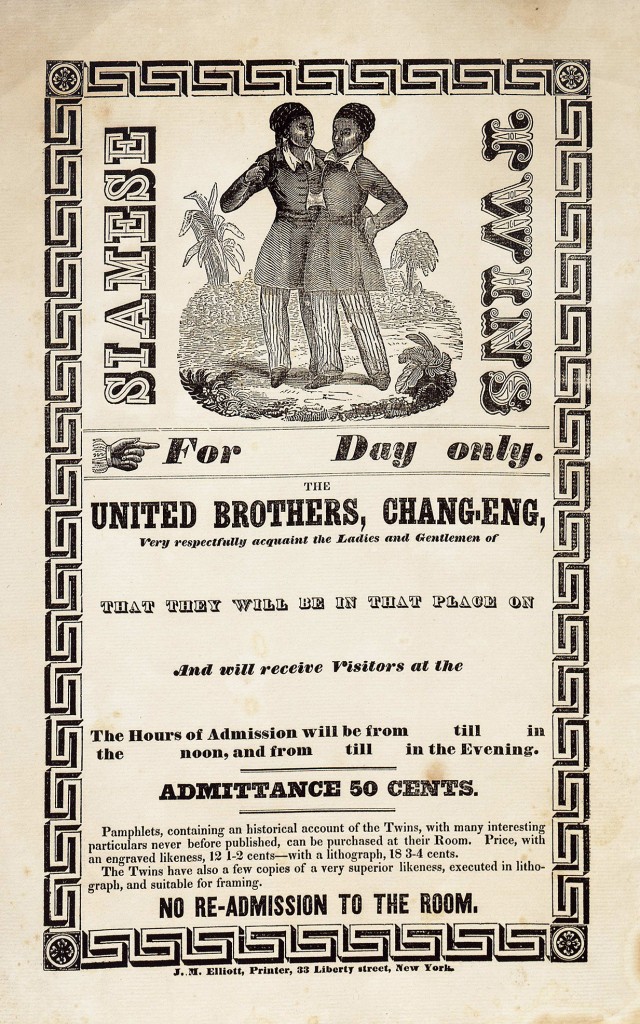 Siamese Twins for … Day Only. New York: J. M. Elliott, Printer, n.d. (Broadside 870).
This advertisement is for the famous Siamese twins Chang and Eng. They were a part of Barnum’s museum for a short six weeks. They exhibited themselves throughout much of their early life and were quite successful throughout the nineteenth century. In their later years, they married and settled down in North Carolina on a plantation they owned. (Image by Petrina Jackson, December 3, 2015) 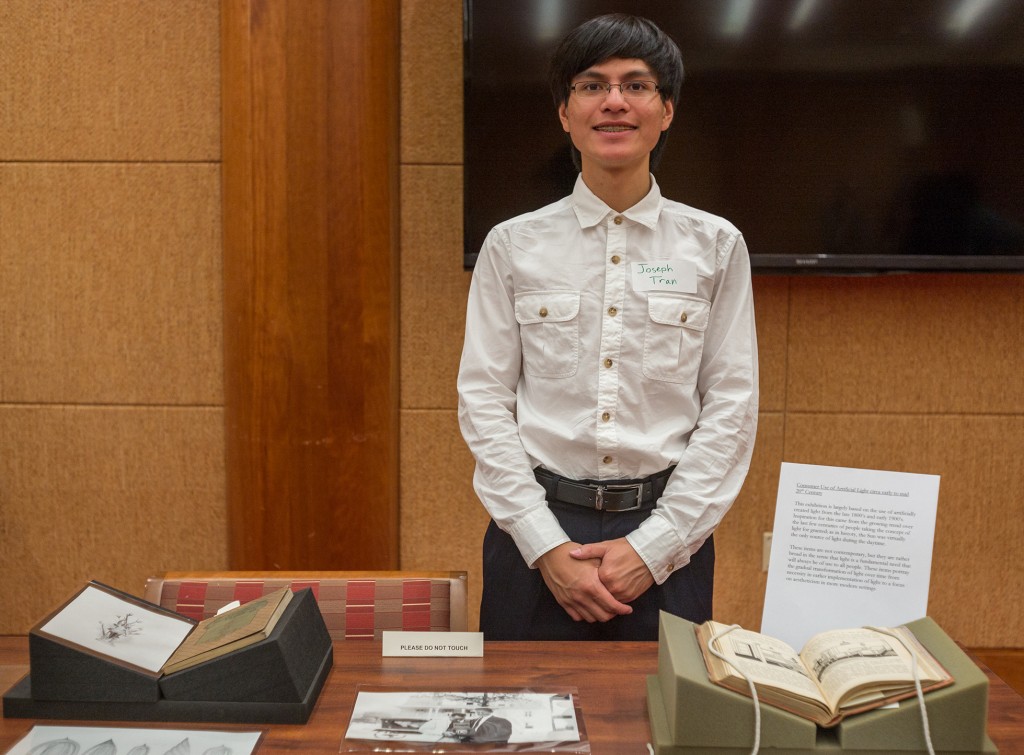 Consumer Use of Artificial Light circa 20th Century

This exhibition is largely based on the use of artificially created light from the late 1800’s and early 1900’s. This time period was highlighted by the increasing use of light bulbs in virtually every setting to illuminate the darkness. The inspiration that founded this collection can be seen as the greatest light bulb of our time, the Sun.

These items are not contemporary, but they are rather broad in the sense that light is a fundamental need that will always be of use to all people. They will portray the creative manipulation of light to change human perception. 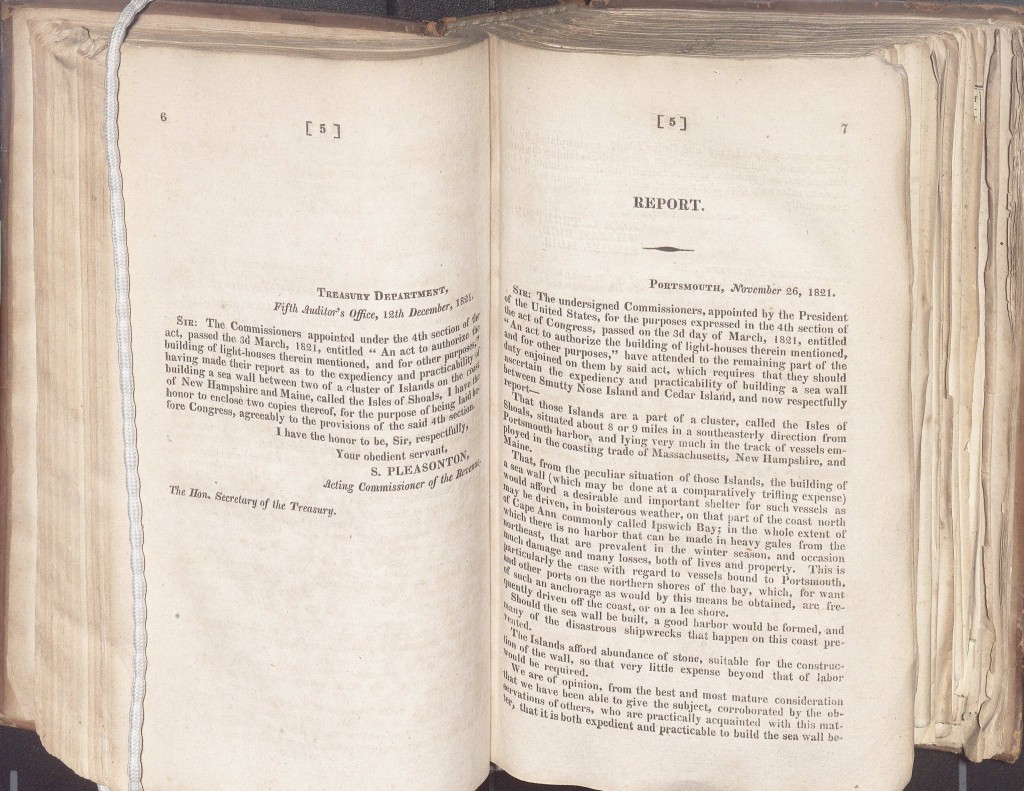 Message from the President of the United States, accompanied with a report upon the subject of the light-houses ordered to be built by the act of third of March, 1821 (A 1821 .U56b no.5)
From the executive papers with U.S. Pres. Monroe. Message… to both houses of Congress… 1st session, 17th Congress, Dec. 5, 1821
This report outlines the necessity of lighthouses to be built nearby to the shores by President Monroe. These would illuminate the night sky and allow sailors and captains to be able to navigate toward land with relative ease. In 1821, these lighthouses would have used a flame lamp of oils that slowly burned over the course of the night, and they were unlike modern lighthouses in that they did not revolve around with mirrors and lenses. (Image by Petrina Jackson, December 3, 2015) 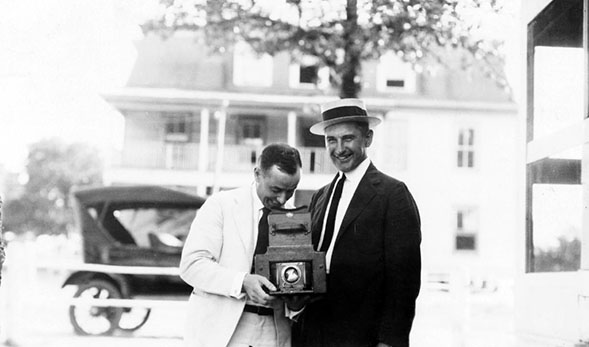 Jackson Davis with camera and an unidentified man, 1915. (MSS3072, 3072a). Jackson Davis Collection of African American Photographs
This photograph illustrates the use of a camera widely available to the general consumer, which was most likely a Kodak. Cameras at the time would have already started using film and shutters to capture an image. Film is able to retain an image because, chemically, it is made with a substance that reacts when struck with a light, namely a flash. The camera revolutionized the way events and people are remembered from a sketch or drawing to a photograph capturing every detail. (Image by Digital Production Services) 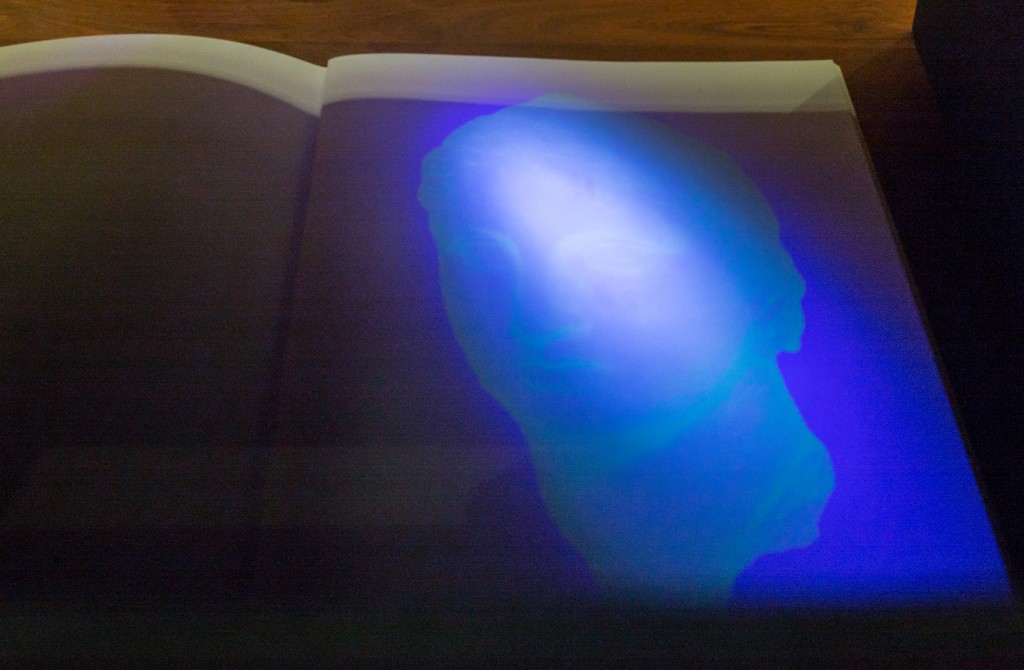 Reed, Justin James. 2013. Brooklyn, N.Y.: Horses Think Press, 2012. (N7433.4.R424 T8 2012). Purchased from the Agelasto Family Library Fund, 2012/2013
This interesting piece by Justin James Reed is a bit deceptive as its pages seem to be completely blank to the naked eye. With the aid of an ultraviolet flashlight, the true images begin to appear visible. This self-published book includes many abstract images, from forest scenery to statues of people. This item fits in this exhibition because it shows how creative manipulation of light can be used artistically to produce interesting effects. (Photograph by Sanjay Suchak, November 17, 2015)