This week, we are pleased to feature a guest post by Special Collections Public Services Assistant Ethan King, who is studying for his M.A. in the U.Va. Department of English.

A brash and turbulent man, a vigorous and luminous artist, Waldo Peirce was a striking figure, his imposing physique matching his powerful personality. Husky, bearded, a football player, an actor, a fisherman, an aspiring poet, and a prolific painter, Waldo Peirce was a jack-of-all-trades, and he was able to rival his variegated skill-set with a penchant for captivating a room with lewd stories and with the formidable ardor with which he lived his life. Yet he has not attained the notability equal to his person and his work. 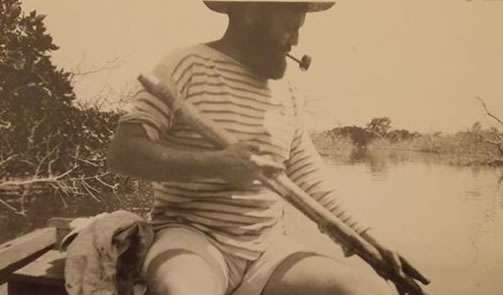 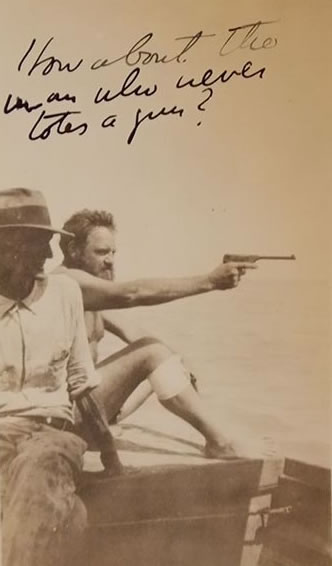 Waldo Peirce with unidentified man (undated, photographer not identified). The writing reads “How about a man who never totes a gun?” (MSS 8402, Clifton Waller Barrett Library of American Literature. Image by Ethan King)

After his dazzling canvases found their way into leading museums when he was a young man, his artistic successes began to wane. After his death, he was all but forgotten in the annals of art history, and he was similarly reduced to a mere colorful figure alongside his much more accomplished friends—Ernest Hemingway, John Dos Passos, James Joyce, and Gertrude Stein, among others. Peirce’s story is one of gruff eclecticism and shining vivacity in a burgeoning world of modernist art. One need only to rifle through his letters and his one published text, Unser Kent, to get a sense of this man and his life.

The Albert and Shirley Small Special Collections Library holds correspondence between Peirce and Harry Salpeter, an editor and writer for Esquire Magazine in the 1930s. Though the correspondence begins under the auspices of an article (“Rabelais in a Smock”) to be published in a July issue of the magazine in 1936, the letters reveal the evolution of an impersonal, working relationship into a genuine friendship in which Salpeter becomes for Peirce a family friend and a sort of artistic confidant. Stretching from the spring of 1936 to the fall of the same year, these letters highlight Peirce’s episodic life, his artistic vision, and his bawdy poetry.

Peirce begins his correspondence with Salpeter by sharing various anecdotes from his life abroad, writing in a strong but fluid style, evocative of the way he could control a room. These anecdotes range in topic from his brief acting career in a Tex Ingram film, for which he was paid in lobster; baseball and football games between his team of painters and sculptors and a team of “jockeys, international crooks, barflies etc” (TLS, 4 May 1936); his capture of a giant sea turtle with Ernest Hemingway during one of their fishing trips in Key West; his trading of girlfriends with John Reed, the American communist activist; and his inspiring a story of Hemingway’s by “grabb[ing] a town pimp by the ear,” and using the man’s body as a weapon (TLS, 25 April 1936). Reflecting upon these anecdotes, Peirce writes, “These episodes are all pretty good stories in themselves rather than just references to the eccentricity of the artist as a young man etc.. they are much more fun to live than to write hence it usually takes an outsider to do the chronicling etc” (TLS, 2 May 1936). In having Salpeter compile these stories, Peirce allows him to have control over the framing of the article, abdicating himself of biased narrativization. He writes, “I hope I dont appear as one of those .. ‘Go ahead and write yr own stuff’ etc and then begin to carp later. After all youre writing for the oaf publico and if you msut seperate the chafe from the groin etc give em the groin every time” (TLS, 29 April 1936).

This last quotation reveals not only his unabashed deferral of authorial control to Salpeter and his ribald humor, but also his characteristic writing style—rife with ellipses, et ceteras, misspellings, and lack of punctuation. Peirce champions this style as an almost Joycean linguistic play: “God knows how many mistakes in spelling I make.. especially on the machine.. where I don’t aleays hit the right letter. Sometimes fine new words are born this way” (TLS, 29 April 1936).

This type of organic and creative spontaneity bleeds into his work. Often ending his letters, “I must quit and get to work,” a refrain that attests to his artistic diligence (TLS, 19 June 36), Peirce exemplifies the artist working in the throes of passion, constantly working himself into a frenzied rhythm more in the manner of Van Gogh than of Cézanne. His spontaneous retreats into his studio produced an incredible breadth of Impressionist paintings, whose subjects varied from sensuously colored landscapes to captivating sweeps of ordinary life. The circulation of his artwork was equally impulsive, as he would consistently shed his paintings and sketches wherever he went, giving them to friends, family, and acquaintances, and even one time burning them. Special Collections houses two stunning original watercolors of Peirce’s, which belonged to his friend John Dos Passos.

Special Collections also possesses one of only eighty-five copies printed of Peirce’s Unser Kent, a satirical and lusty poem about fellow artist Rockwell Kent (our copy once belonged to the famous book designer Merle Armitage). Intended to be recited to the music of Schubert’s “Der Erlkönig,” Peirce’s Byronic poem unfurls a euphemistic story of a man playing his flute. The frontispiece, done by Kent, shows an Olympian Peirce sitting above a group of fawning nymphs, reading his poem from a scroll that is generated from, of course, his groin. Hilariously dirty couplets abound in the poem, such as “He flutes through the fiercest wind that blows/ Arousing the unborn embryos,” “He fluted venereal legacies so/ That syphilis turned to a pleasant glow,” and “He leapt all frontiers a-waving his phallus/ Fluting Deutschland über alles.” This was not the only bawdy verse Peirce penned. Rather, it was the only one printed, for he alludes to more to Salpeter:

I got an epissel from Gingrich asking for my lyric effusions even if they werent printable for his own indulgence tho he’d like em printable mebbe. As you have been my officill hornblower as pote etc I think I’d better send [them] to you first for censorship.. I am scared of editors especially as most of my buffooneries are dam personal..the rhymes etc built around the actual names etc. these can be changed to a certain degree I suppose if by chance there were something he wanted. I dont know about sending too bawdy stuff through the mail etc. (TLS, 26 May 36)

However, the only poetry he seems to have shared with Salpeter is Peirce’s translation of Baudelaire. Yet in this moment, Peirce exhibits an intimate vulnerability and self-deprecation regarding his writing. Who knows, then, if Peirce’s inability to publish another poem or book of poems was a result of their lewd content or of his anxieties about publishing personal material.

So, what are we to make of Waldo Peirce, the enigmatic figure who maximized his artistic output all the while engaging in sport, film-acting, and rugged fishing excursions? His letters exude an infectious bravado; his vivid and daring artistic processes and productions bespeak an inexorable passion for the artistic life; and his jocular poetry radiates a captivating sense of humor and a keen eye for satire. All of these things showcase his wide skill set and seem to indicate that he was popular among an extremely popular group of artist friends. So then, when we look into the canon of established modernist artists, we must ask, “Where’s Waldo?”

One thought on “Where’s Waldo?”