Anyone who has ever curated or installed an exhibition of books and manuscripts knows that these materials are inherently impossible to exhibit effectively. While paintings and sculpture are created with the intention of exhibition, most of the artifacts we hold are not. Visitors can only see one page of any multipage document, and artifacts that were made to be held in one’s hands and experienced intimately are relatively far away, usually behind glass. Curators are always looking for ways to transcend these difficulties. We hem and haw over writing lengthy descriptions in labels. If we have funds, we create high-quality facsimiles of hidden pages or even a “page-turner” digital facsimile of the complete artifact. 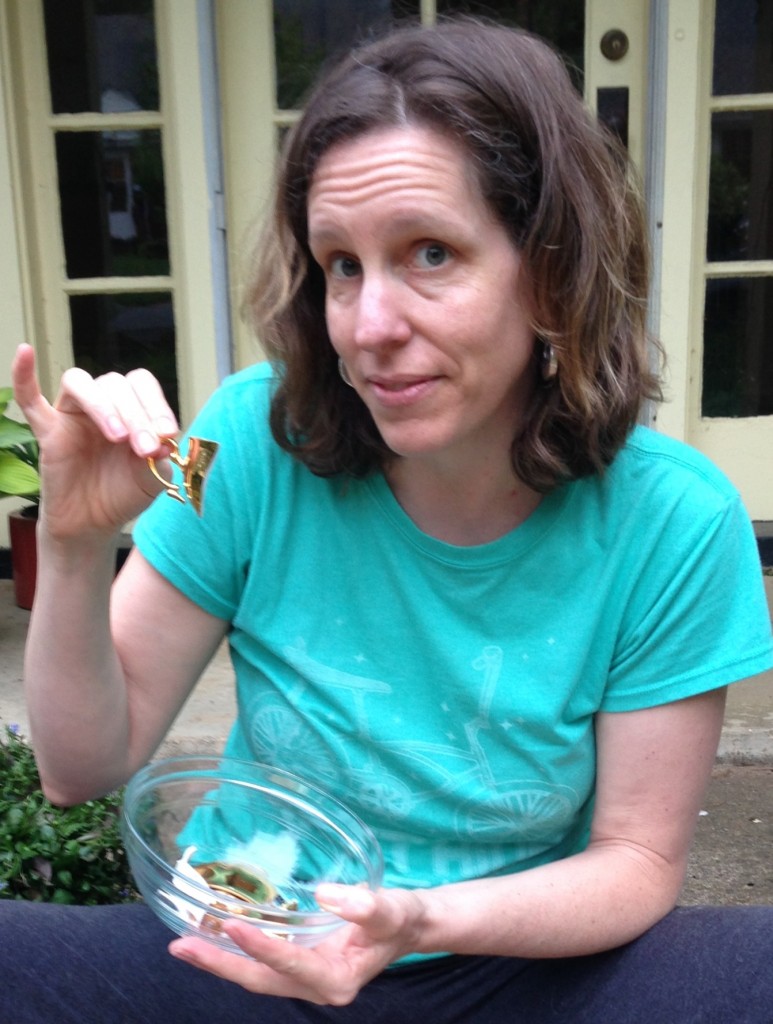 Here is the curator, hard at work. (Photo by Alicia Dietrich)

I have just finished installing our latest exhibition, “Magazines Unbound: Periodicals as Art 1942-1983.” This project reveals an unexpected strength in our collections: magazines conceived of as formal artistic experiments in and of themselves. Most of the magazines displayed are gatherings of paper or even objects into folders, envelopes, and boxes, rather than bound as books. This makes them, in some ways, ideal for exhibition. 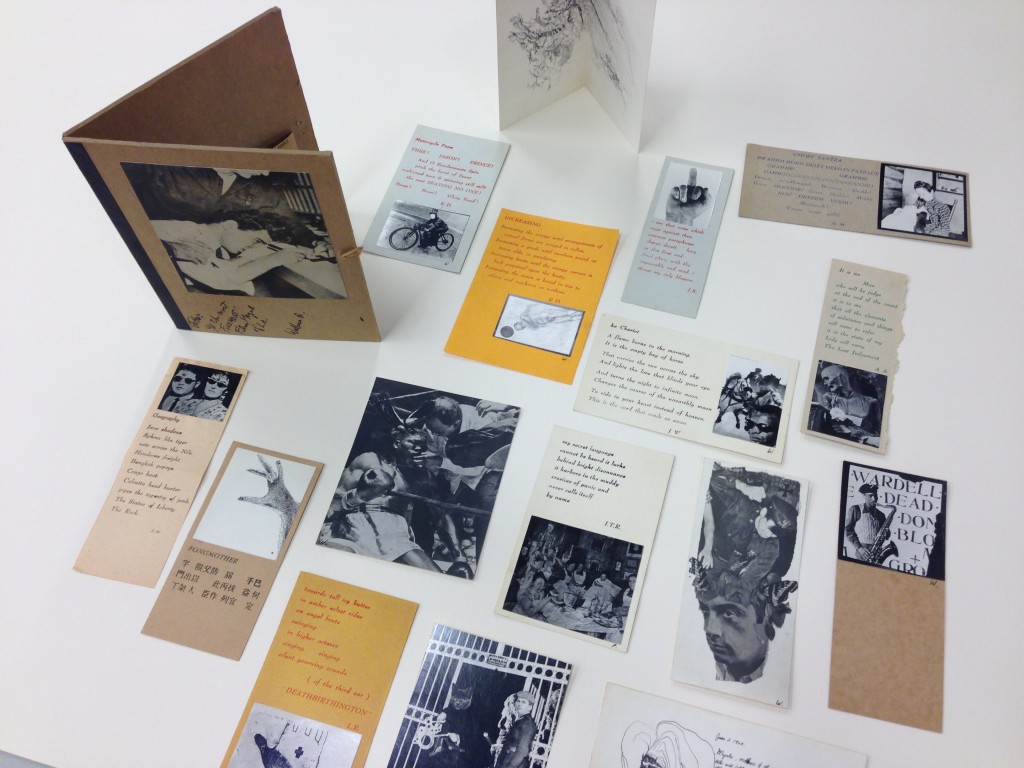 The 1950s west-coast Beat magazine Semina displays beautifully, since most of its contents are loose sheets. Shown are most of the contents of Semina 8 being prepared for exhibition (PS 580 .S45, Marvin Tatum Collection of Contemporary Literature. Photo by Molly Schwartzburg)

But two of the magazines–Aspen and S.M.S.–were venues for conceptual artists in the 1960s, who had a penchant for works of art that remain incomplete without the participation of the reader or viewer. Among the objects included are records and audio and video tapes that need to be played, instructions for writing a poem, templates for boxes that need to be glued together, and a paper doll and candy-wrapper that need to be cut out. What’s a curator to do?

I chose to let all the works stand incomplete with one exception: Yoko Ono’s “Mend Piece for John,” shown below. 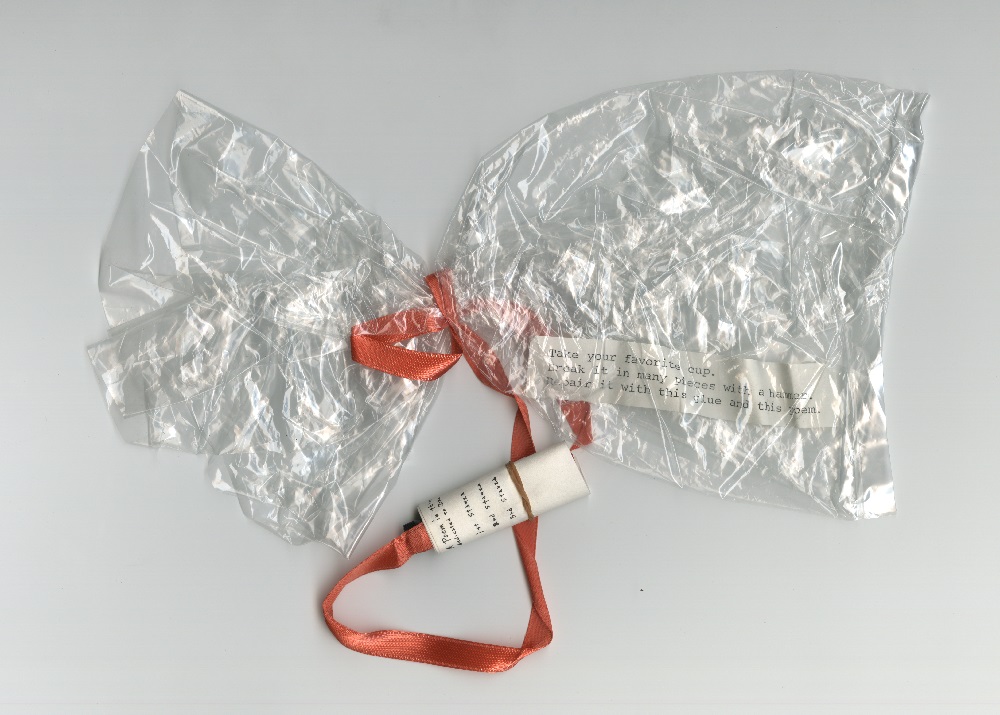 A tube of glue is wrapped with a poem, and attached to a plastic bag with a satin ribbon. Inside the bag is a set of typed instructions:

Break it in many pieces with a hammer.

Repair it with this glue and this poem.

This poem comes wrapped around the tube of glue in Ono’s piece with a rubber band. After unwrapping it to be sure I knew what it included, I took a quick snapshot for reference purposes before carefully rewrapping it. (Photo by Molly Schwartzburg)

How could I resist? A friend was visiting from out of town, so we went out to The Factory, my favorite antique mall out in the Shenandoah Valley, where we selected two cheap but visually appealing teacups. “But wait,” you say. “Didn’t the instructions specify that it be ‘your favorite cup’?” Well…let’s just say I wasn’t ready to make that kind of sacrifice for work. It was still a pretty profound experience. 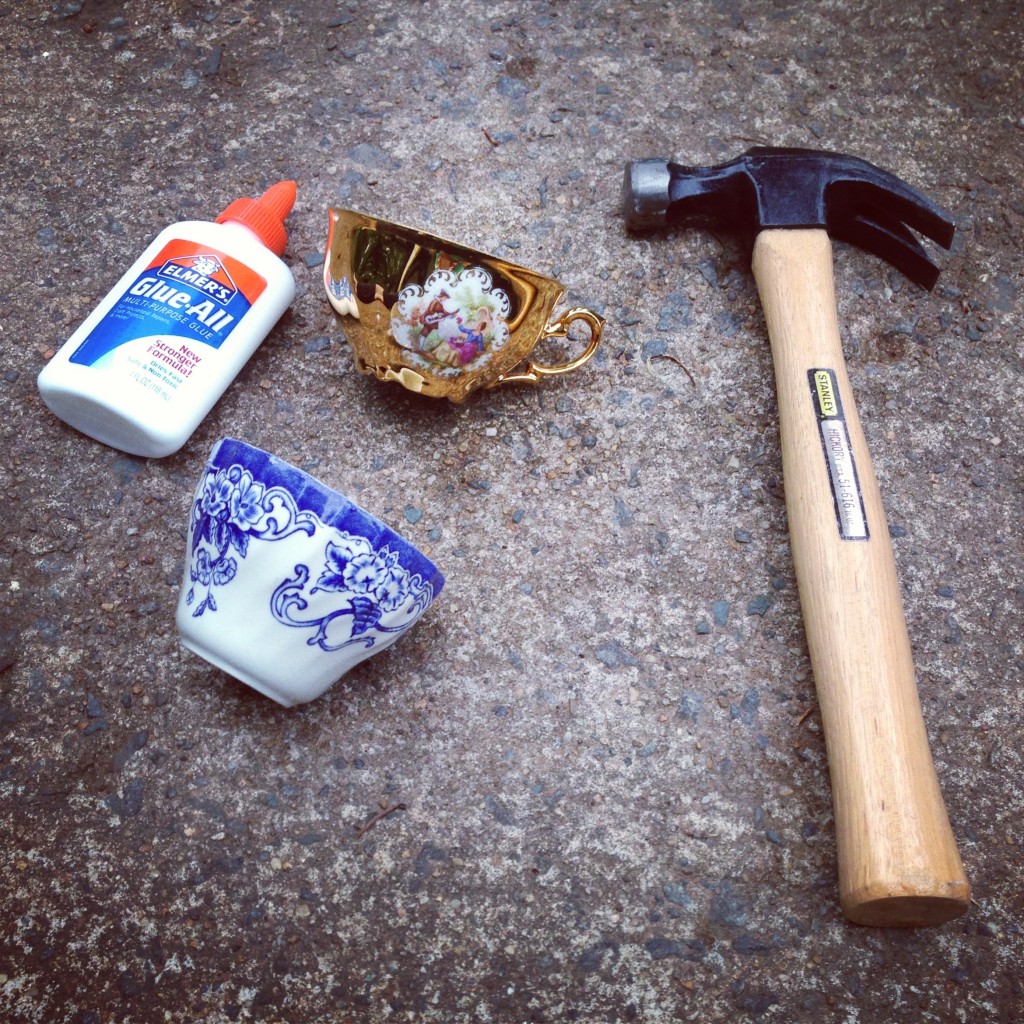 We prepared to destroy the teacups in my front yard. (Photo by Molly Schwartzburg) 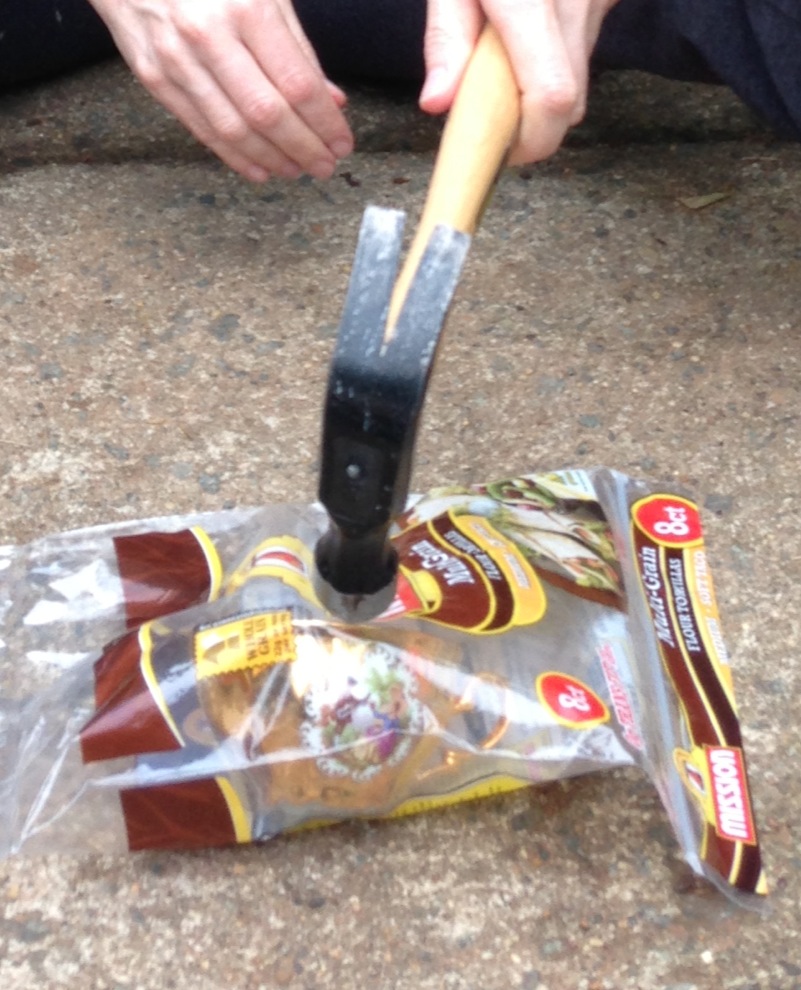 No tortillas were harmed in the making of this artwork. It only took one blow to shatter each cup. This was the easy part. (Photo by Alicia Dietrich) 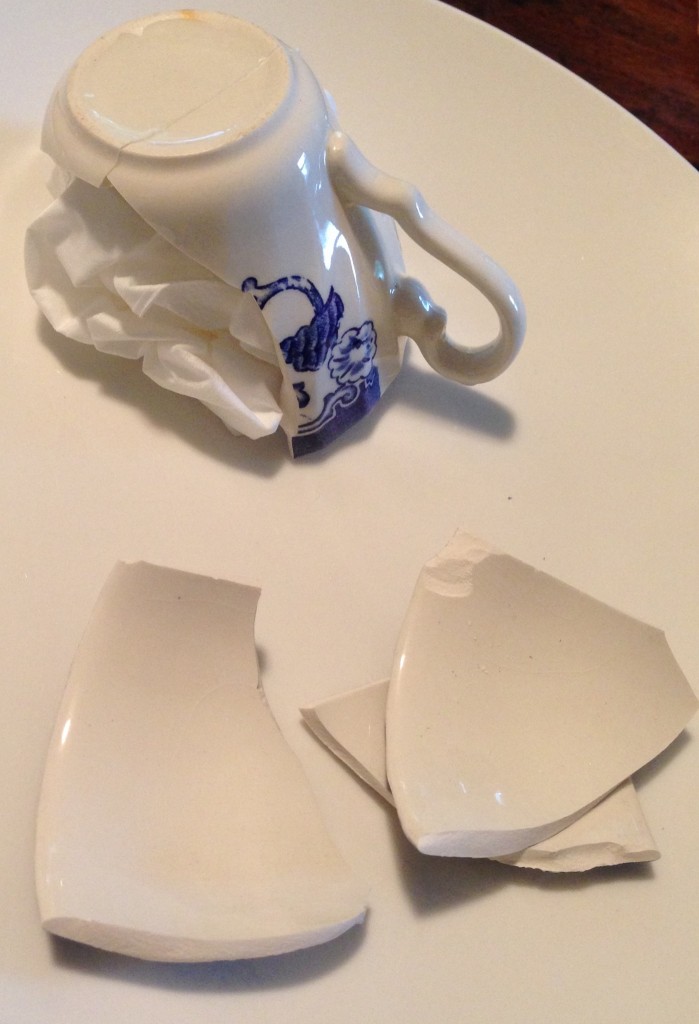 The glueing was fun at first, and then we realized how long it was going to take. We had to sit very still holding each piece for at least 15 or 20 minutes before we could safely let it go. So we sat, talked, glued, talked, and mended. It was wonderful. (Photo by Molly Schwartzburg) 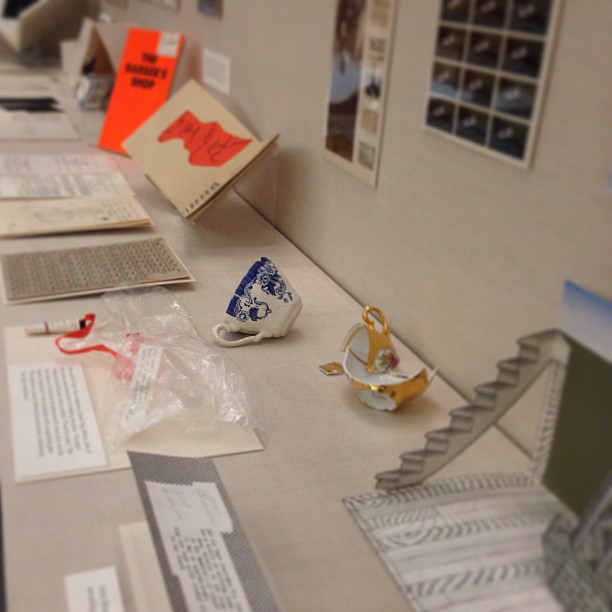 Here’s the final view of the item in the exhibition, with all the other materials in S.M.S. 5. (Photo by Molly Schwartzburg)

I can’t say that visitors to the exhibit will understand the piece fully just because they can view its final result in the cases. But my friend and I discovered that the process itself, even modified, was wonderfully meditative. There is something about mending a cup, slowly and deliberately, that is itself healing, we discovered. Even if the cup is no longer usable. I’ll look forward to taking these results back home after the exhibition comes down.

You can view Ono’s piece in the exhibition “Magazines Unbound: Periodicals as Art 1942-1983” in the First Floor Gallery until January 5, 2014.