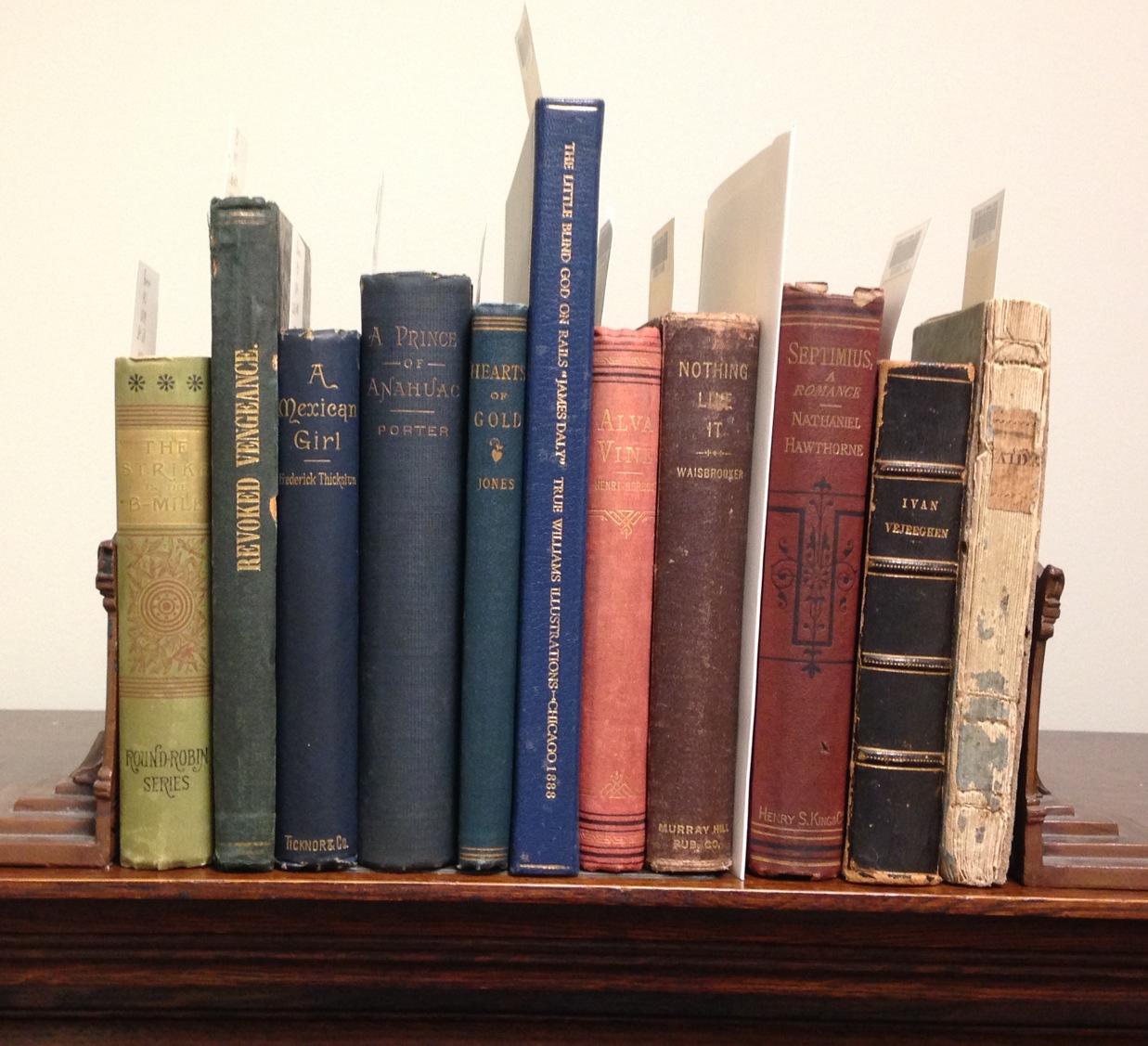 Some of our summer beach reading: 19th-century American fiction newly added to the Clifton Waller Barrett Library of American Literature

You may have noticed that “This Just In” took a brief summer hiatus. Yes, it’s true: we were vacationing at the beach, reading!  Catching up, not with the latest Dan Brown thriller, but with an influx of 19th-century American fiction to the Clifton Waller Barrett Library of American Literature. It is unlikely that any of these works ever made the best-seller list, but we recommend them to you nonetheless, for they significantly enrich the Barrett Library’s holdings in interesting ways. 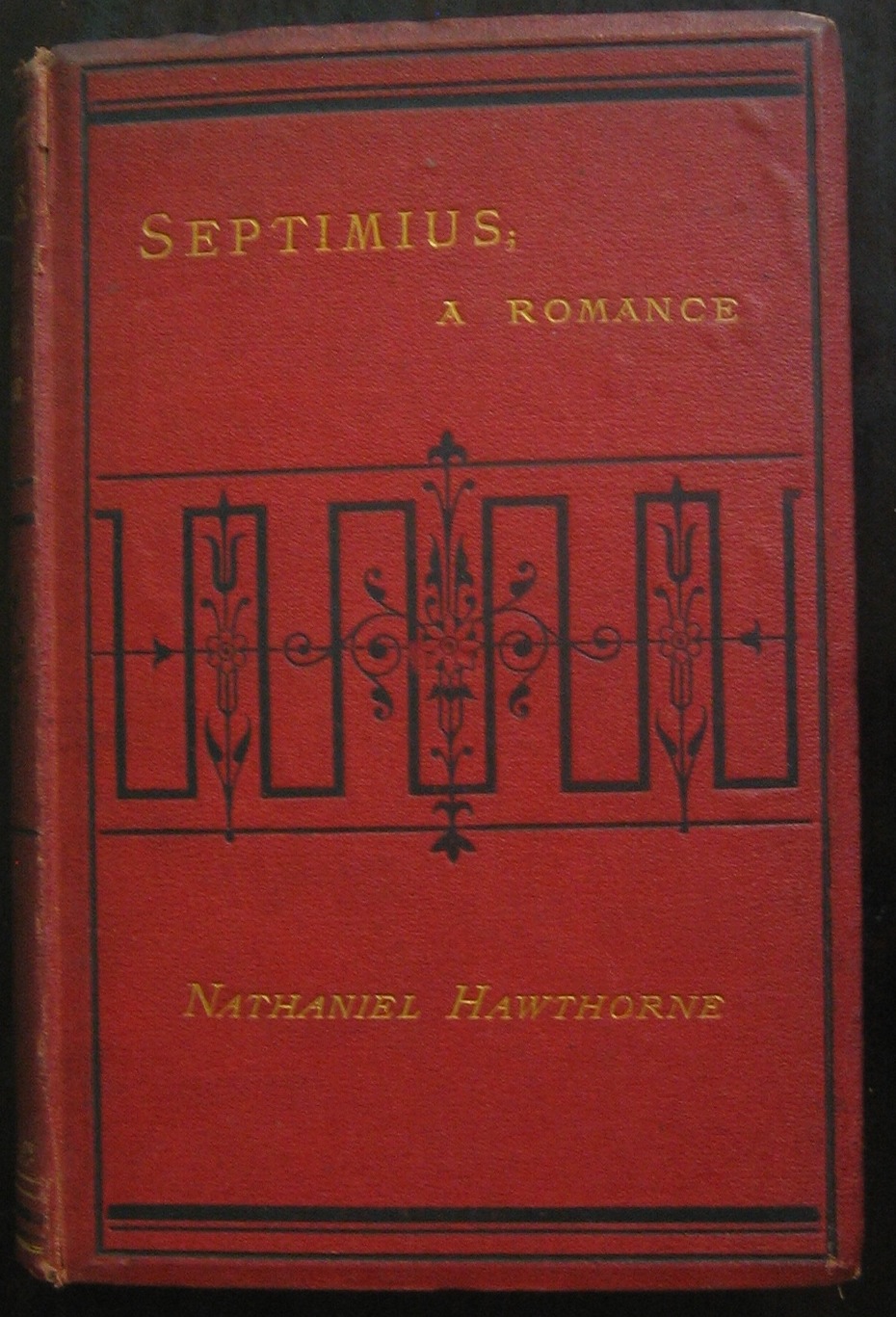 The Barrett Library is so comprehensive for major American authors that it is hard to believe that it lacked a Nathaniel Hawthorne first edition! But only this spring did we obtain the true first edition of Septimius: a romance. Left unfinished at Hawthorne’s death, Septimius was prepared for publication by his daughter Una with assistance from Robert Browning. The first edition appeared in London in 1872, with the first American edition, retitled  Septimius Felton: the elixir of life, following two months later. Initially well received, Septimius was soon deemed a “failure” by critics, though there are signs of renewed scholarly interest in Hawthorne’s “romance of immortality.” 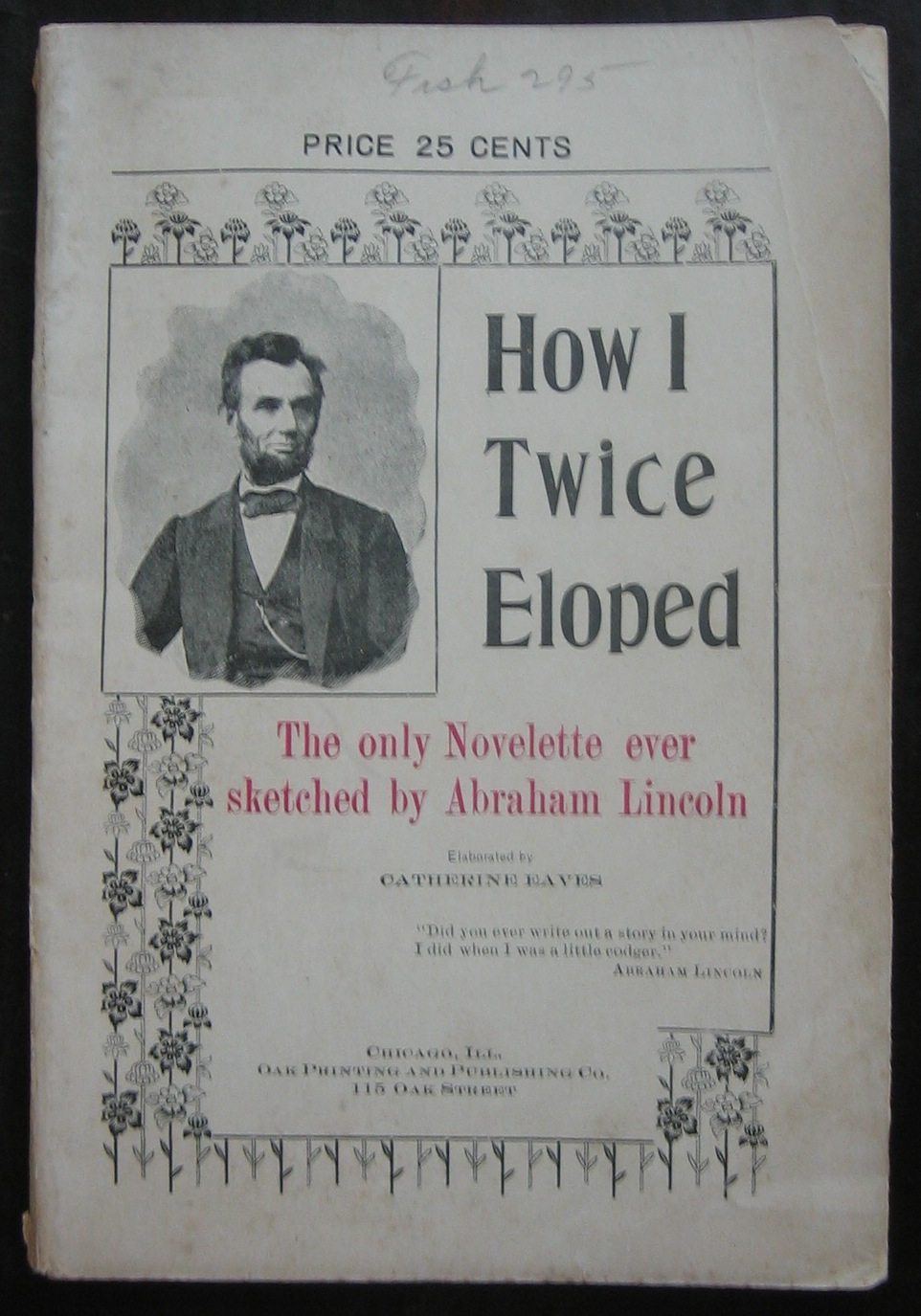 Did you know that Abraham Lincoln authored a short novel? Neither did we, until we encountered at a small book fair a copy in original illustrated wrappers of How I twice eloped: an Indiana idyll, billed as “the only novelette ever sketched by Abraham Lincoln.” Actually, a closer perusal reveals a sort of Lincolnesque tall tale, as Lincoln’s agency in this work was scant indeed. How I twice eloped was penned, we are told, by Catherine Eaves, a member of the Lincoln Literary Society in Hoosier Heights, Indiana, a stone’s throw from Lincoln’s boyhood home near the banks of the Ohio River. (Or perhaps the true author was the copyright holder, Albert Alberg.) Taking her cue from an anecdote (related in Ida Tarbell’s recently published Life of Abraham Lincoln) that Lincoln reputedly told about his youth in Indiana, Eaves “elaborated” it into a short novel. How I twice eloped is one of many fascinating works of regional American fiction to be found in the Barrett Library. 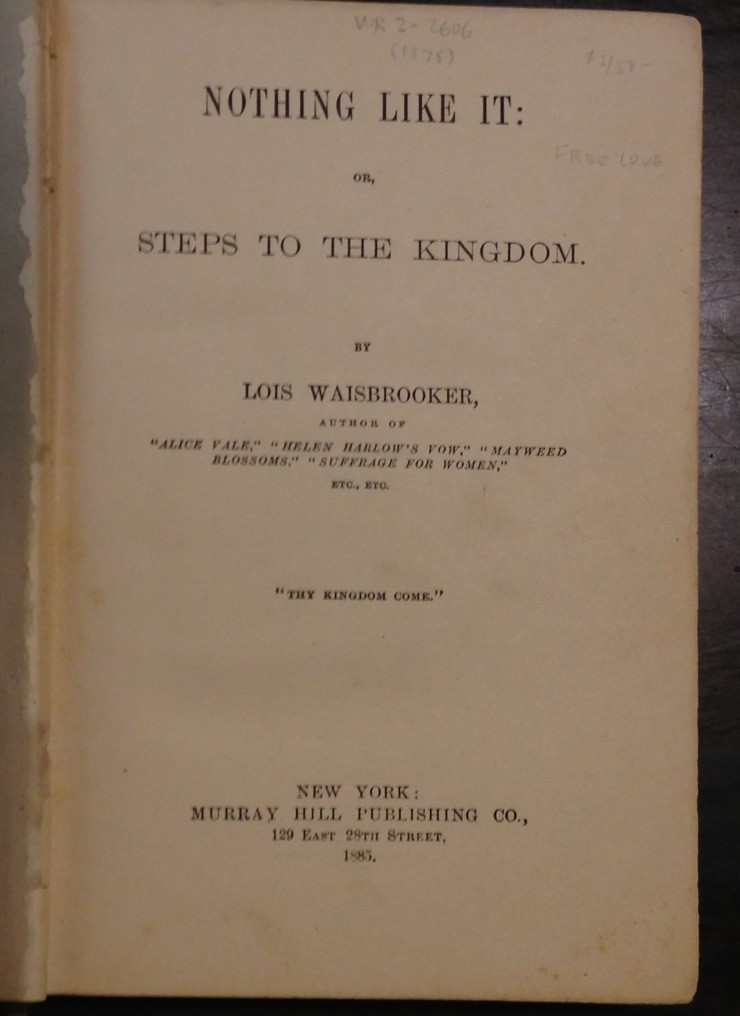 As the 19th century progressed, women’s issues loomed ever larger in American literature. Lois Waisbrooker was one of many who sought to advance the cause of women’s rights through didactic fiction. Born Adeline Eliza Nichols, Waisbrooker adopted a new name and a feminist outlook following a forced marriage. Her career as a radical reformer led her from spiritualism to anarchism, but it was as an advocate of women’s rights and sexual freedom that she was best known. Nothing like it: or, steps to the kingdom, first published in 1875, takes free love, public morals, and the true meaning of marriage as its ambitious subject. The Barrett Library still lacks the first edition, but we have acquired the second edition, published in New York in 1885 by the Murray Hill Publishing Co.—the publishing arm of free speech and birth control advocate Edward Bliss Foote. 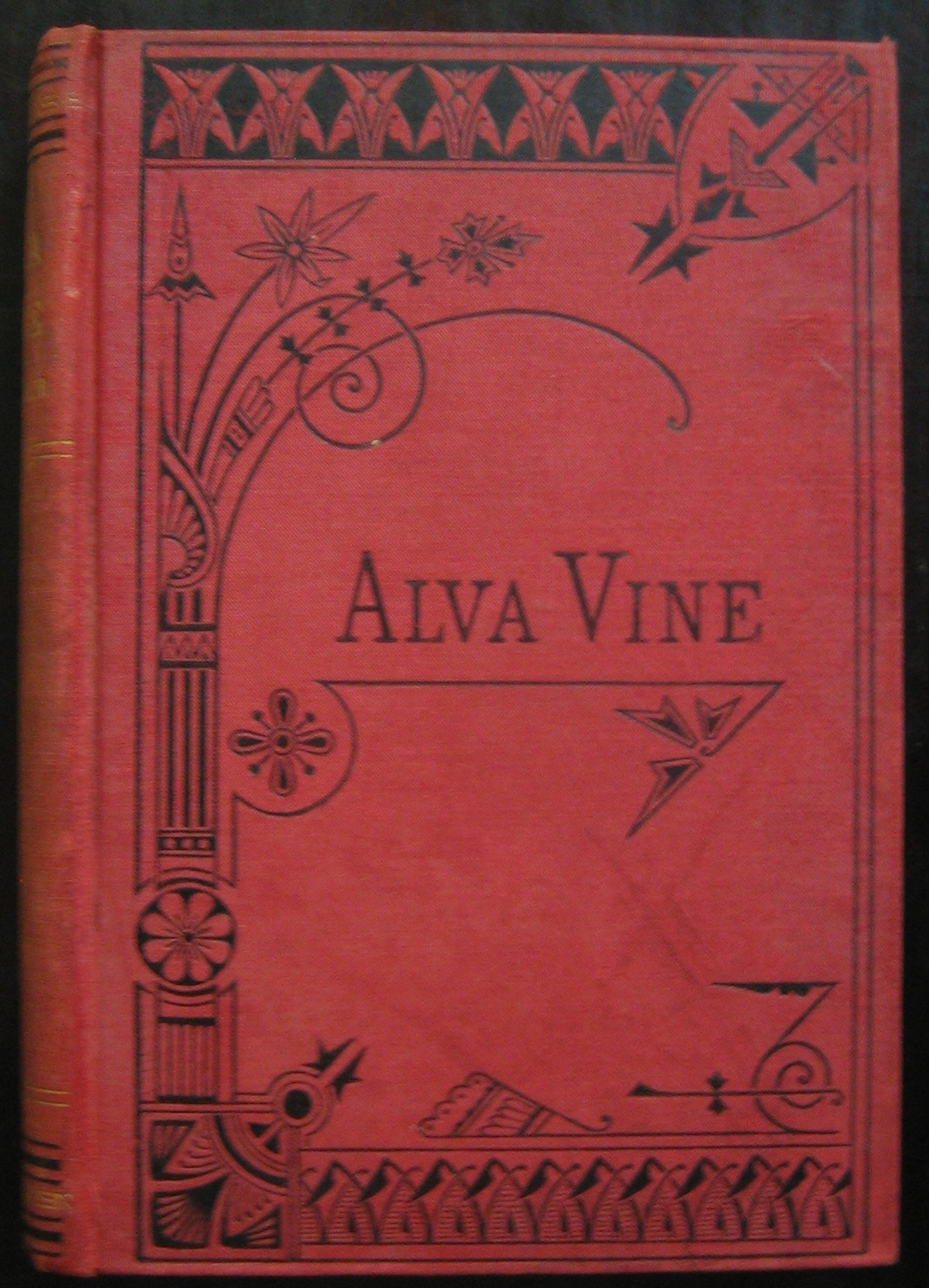 The changing role of women is addressed from a different perspective by Henri Gordon in Alva Vine; or, art versus duty, published in 1880. Noting that “one class now rapidly developing in the United States” is that of the career woman, Gordon tells the fictional story of opera singer Alva Vine, who “thinks and acts for herself as an individual endeavoring to do right and follow the dictation of the spirit given her for self direction, without regard to prejudices or received ideas of the exact boundaries of woman’s sphere, or the right she has to be a self-poised untrammeled, helpful woman, being bound only by a sense of duty and good judgment.” The novel is also interesting for its two “Artotype” illustrations, which are unrelated to the text. These probably were inserted at the request and expense of the Artotype patent holder in order to advertise this new photomechanical process. In any case, this is a very early use of Artotype for book illustration. 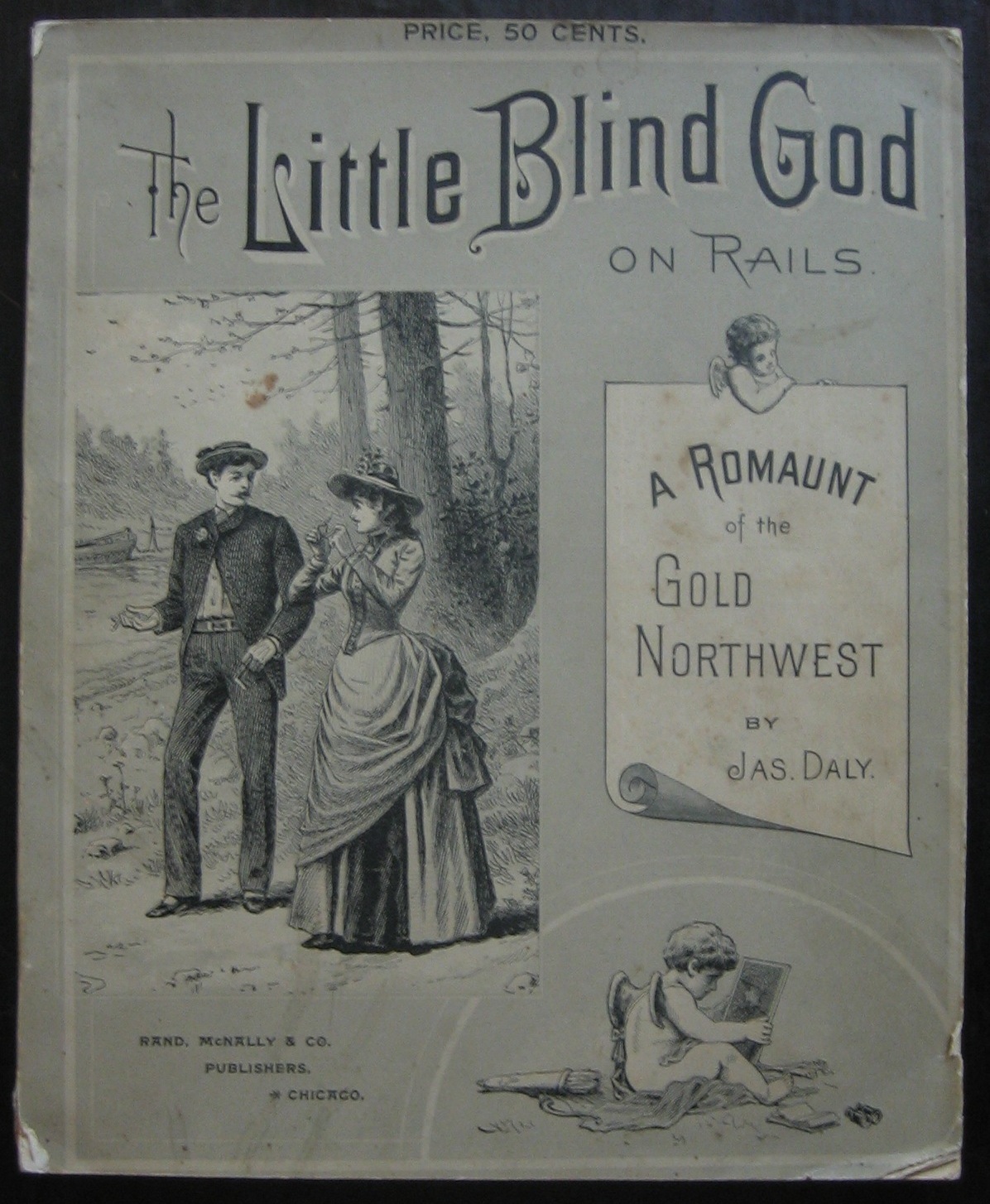 Another unusual late 19th-century example of “product placement” in American fiction is The little blind god on rails: a romaunt of the Gold Northwest, published in Chicago in 1888. This large-format work, authored by “James Daly” (pseudonym of Frank S. Gray) and profusely illustrated by True Williams (who earlier had illustrated Tom Sawyer), was written to promote leisure travel to the American northwest on board the Chicago & North-Western Railway. Train travel is the true hero of this tale, whose human characters, when not enjoying the sights or pursuing the “little blind god” (i.e. Love), extol the comfort and convenience of riding the rails. 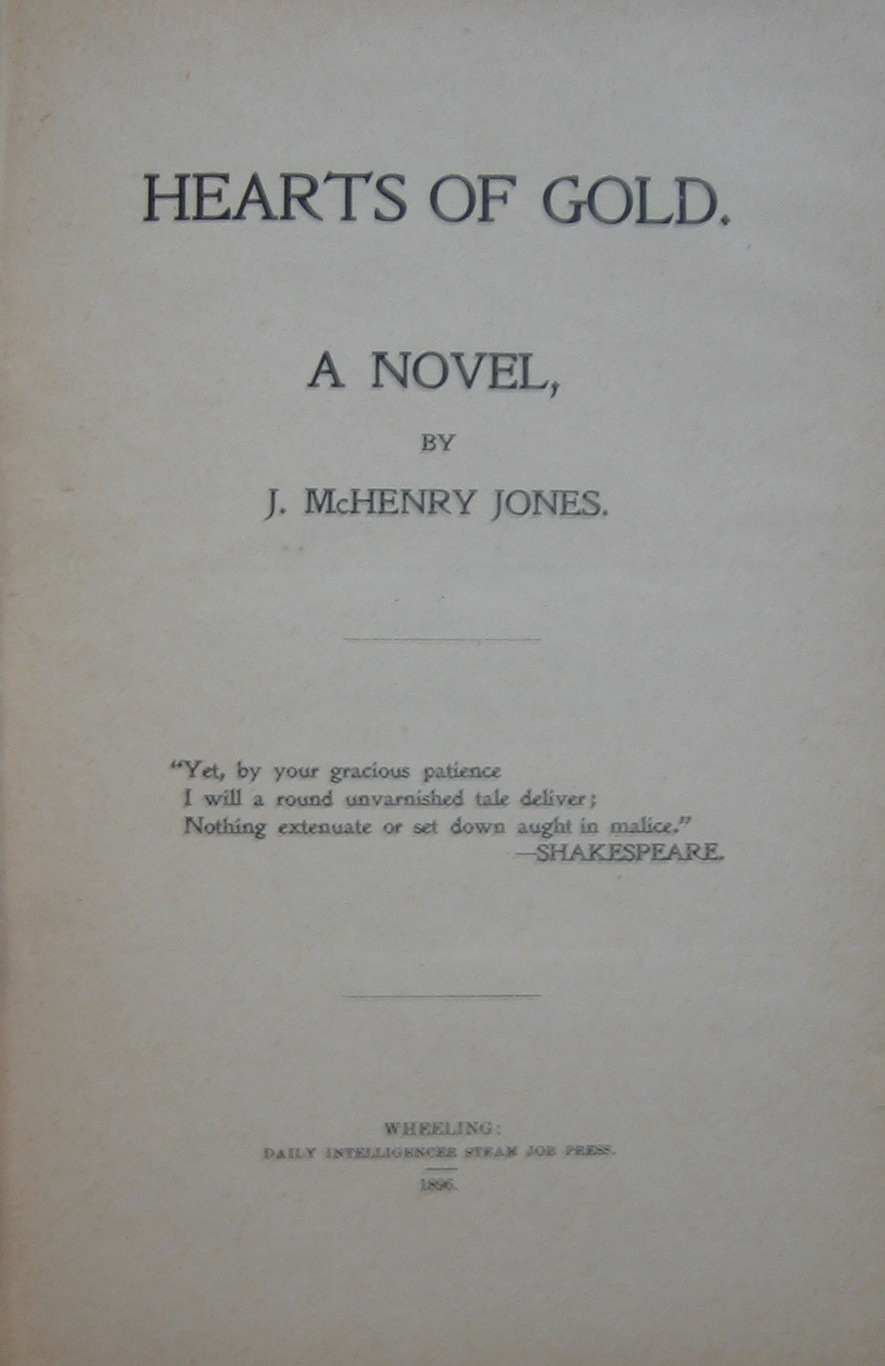 The Barrett Library has also acquired a fine copy of Hearts of gold, the only novel published by J. McHenry Jones. An African American born in Gallipolis, Ohio, in 1859, Jones distinguished himself academically before moving to West Virginia in 1882. There he became a leader in the African American community, serving as a school principal and president of what is now West Virginia State University, a prominent member of fraternal organizations, a Republican Party stalwart, and newspaper editor. Jones opens Hearts of gold, published in 1896, in an idealized African American settlement north of the Mason-Dixon line. Its protagonists then move southward to attend a fraternal gathering, only to fall prey to the new forms of racial injustice being instituted by whites in the post-Civil War South. 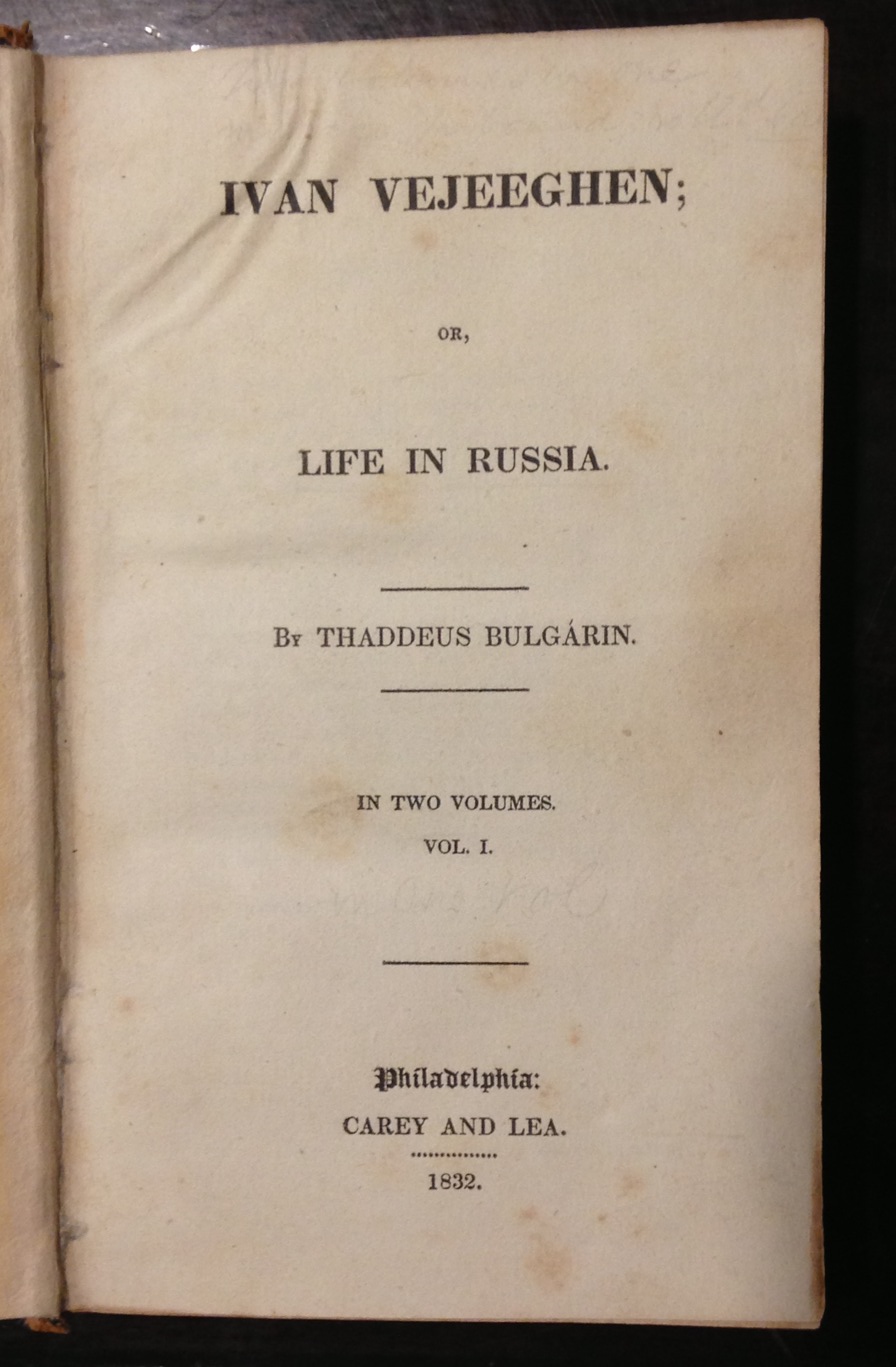 Thanks in part to the enterprise of British publishers—and to the absence of international copyright agreements—19th-century American readers also had access to a surprisingly broad range of foreign literature in translation. In 1832, for instance, the Philadelphia firm of Carey and Lea—then the American publisher of James Fenimore Cooper’s best-selling novels—offered to their readers what may be the earliest work of Russian fiction to be translated into English, and the first to be published in the United States: Faddeĭ Bulgarin’s Ivan Vejeeghen; or, life in Russia. Set in early 19th-century Russia, Ivan Vejeeghen is less the story of its rather bland hero than a lively panorama of contemporary Russian society.  Bulgarin’s novel proved popular in Europe following publication in 1829, and an English translation by George Ross followed two years later. Carey and Lea promptly reprinted Ross’s translation, presumably without permission or royalty payment, but it is unlikely that they profited much from this speculation.