As students approach their final exams for the Fall of 2022, Manuscript and Archives
processor Ellen Welch is pleased to share an original letter from a new acquisition of the Bennett Taylor Papers (MSS 9221), written in 1854 from a father giving advice to his son, a University of Virginia student. These letters were donated by Elizabeth Kirk Page—a descendant of the Jefferson and Randolph family—to the Small Special Collections Library in October 2018.

The letter was written by John Charles Randolph Taylor (1812-1875) to his son Bennett Taylor (1836-1898), a student in February 1854. Taylor is also a great-great-grandson of Thomas Jefferson through his mother Martha “Patsy” Jefferson Randolph Taylor, (1817-1857). Mr. Taylor advises Bennett to engage in student learning that extends beyond test scores and grades.

I love the advice in this letter because it reminds me of how my father used to counsel me when I was a college student—telling me to savor my years of learning as if I were drinking a fine glass of wine! While we may forget a test score, we remember personal and meaningful connections with faculty, students, and academic concepts for a lifetime. As the University community nears the end of this semester, it is good to focus on those connections that can enrich your life forever. 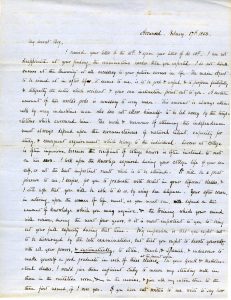 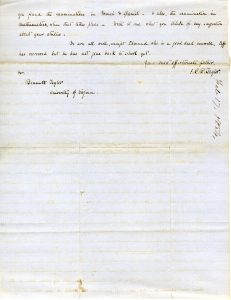 disappointed at your finding the examinations harder than you expected. I do not think

success at the University at all necessary to our future success in life. The main object

to be aimed at in after life, it seems to me, is to be good & useful & to perform faithfully

& diligently the duties which accident & your own inclination point out to you. A certain

amount of this world’s goods is necessary to every man. This amount is always attain-

tations which surround him. The mode & manner of attaining this independence

must always depend upon the circumstances of natural talent, capacity for

study, & consequent acquirement, which belong to the individual. Success at college

on his [ears]! I look upon the knowledge acquired during your college life of your own

self, as not the least important result which is to be attained. It will be a great

pleasure to me, I confess, for you to graduate with credit in your different classes, &

I still hope that you will be able to do so, by using due diligence. Your after course,

in entering upon the success of life, must as you must see, depend on the

amount of knowledge which you may acquire, & the training which your mind

will receive, during the next four years, & it is most important to you to bring

out your full capacity during that time. My impression is that you ought not

to be discouraged by the late examinations, but that you ought to devote yourself

with all your powers, & systematically, to Latin, French, & Spanish, & endeavor to

make yourself a good graduate in each of these classes at the present session.

In your Greek & Mathematical classes, I would give them sufficient study to insure my

standing well in them in the recitation room and [exam], & give all my extra time to the

three first named, if I were you. If you have not written to me, write to say how

mathematics, when that takes places. Write to me what you think of my suggestion

Your most affectionate father

Bennett Taylor graduated from the University of Virginia, became a Lieutenant Colonel in the American Civil War, and survived being a prisoner at Johnson Island in Lake Erie, New York. He was a clerk for the Circuit Court, a Justice for the Peace, a Town Magistrate, an attorney, and a husband and father of six children. While he was far from being wealthy—in fact, he struggled to pay his rent—by all known accounts he had a rich and fulfilling life. The Bennett Taylor papers include letters from his grandmother Jane Hollins Randolph (1798-1871), and his great aunt Ellen Wayles Coolidge (1796-1876), granddaughter of Thomas Jefferson.

Some of the letters can also be read online created via Monticello and the Thomas Jefferson Foundation.

Bennett Taylor also collected autographed comments of friendship and signatures from his Kappa Alpha brothers and fellow students at the University of Virginia in an autograph album which is also in our University Archives collection (RG-30/17/1.821).

Check out the related Edgehill Randolph family collection (MSS 5533-e)—these collections give a close-up view of the attitudes and lives of people that lived in our town during another time, sharing past knowledge into our present.