Curated by the Small Library’s Reference Team, What Lies Beneath: The Macabre and Spooktacular of Special Collections, takes a deeper dive into the catacombs of UVA’s archival netherworld. Leaving no page unturned nor manuscript box unopened, curators Anne Causey, Regina Rush, and Penny White have ferreted out the frightening and ghoulish side of Special Collections. The resulting exhibition is designed to whet the appetite of ghoul seekers young and old. 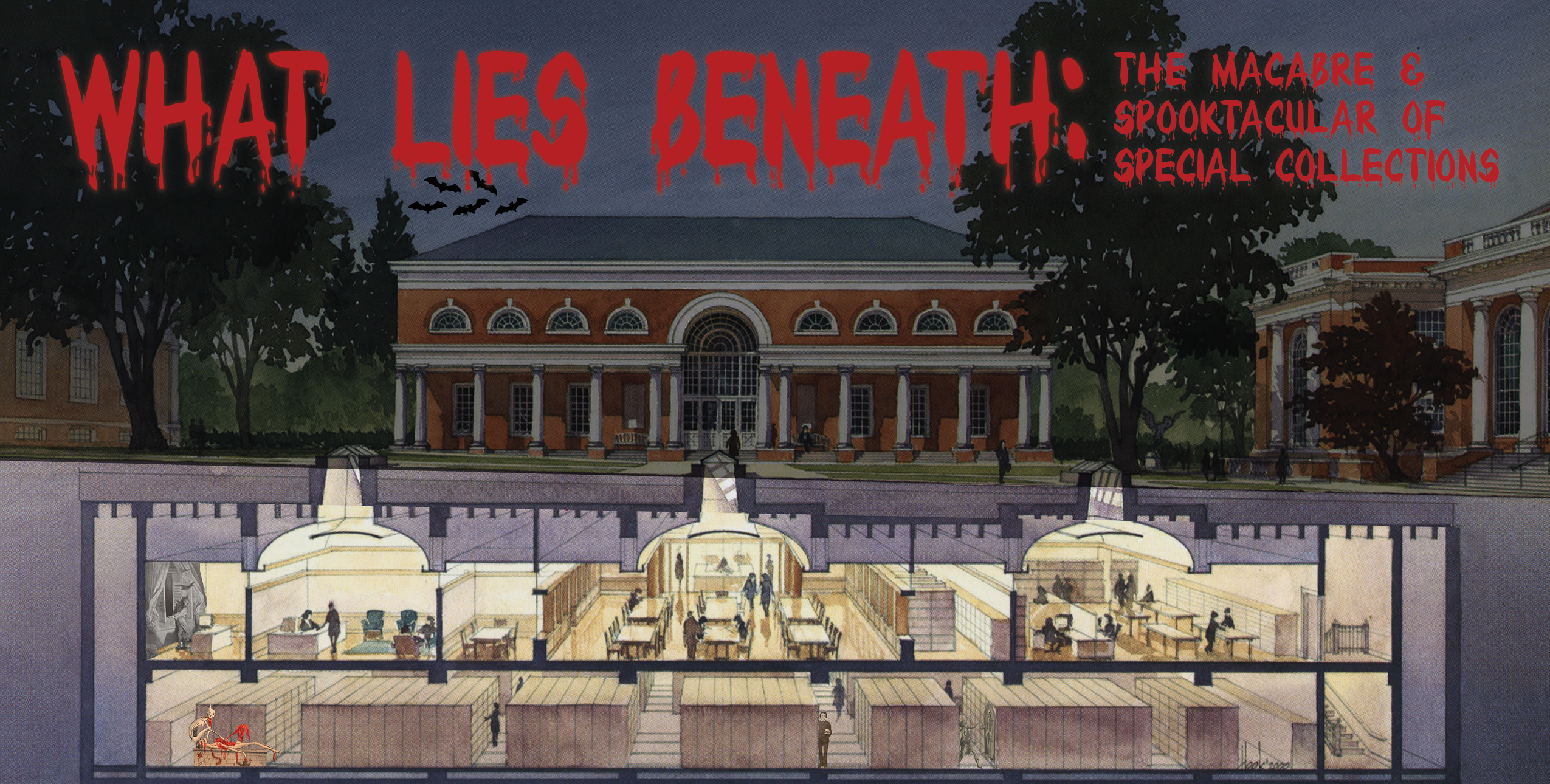 Ever want to see our stacks in person? Our exhibition poster might change your mind. Or you might want to pick one up to take back to your dorm–weirdo! 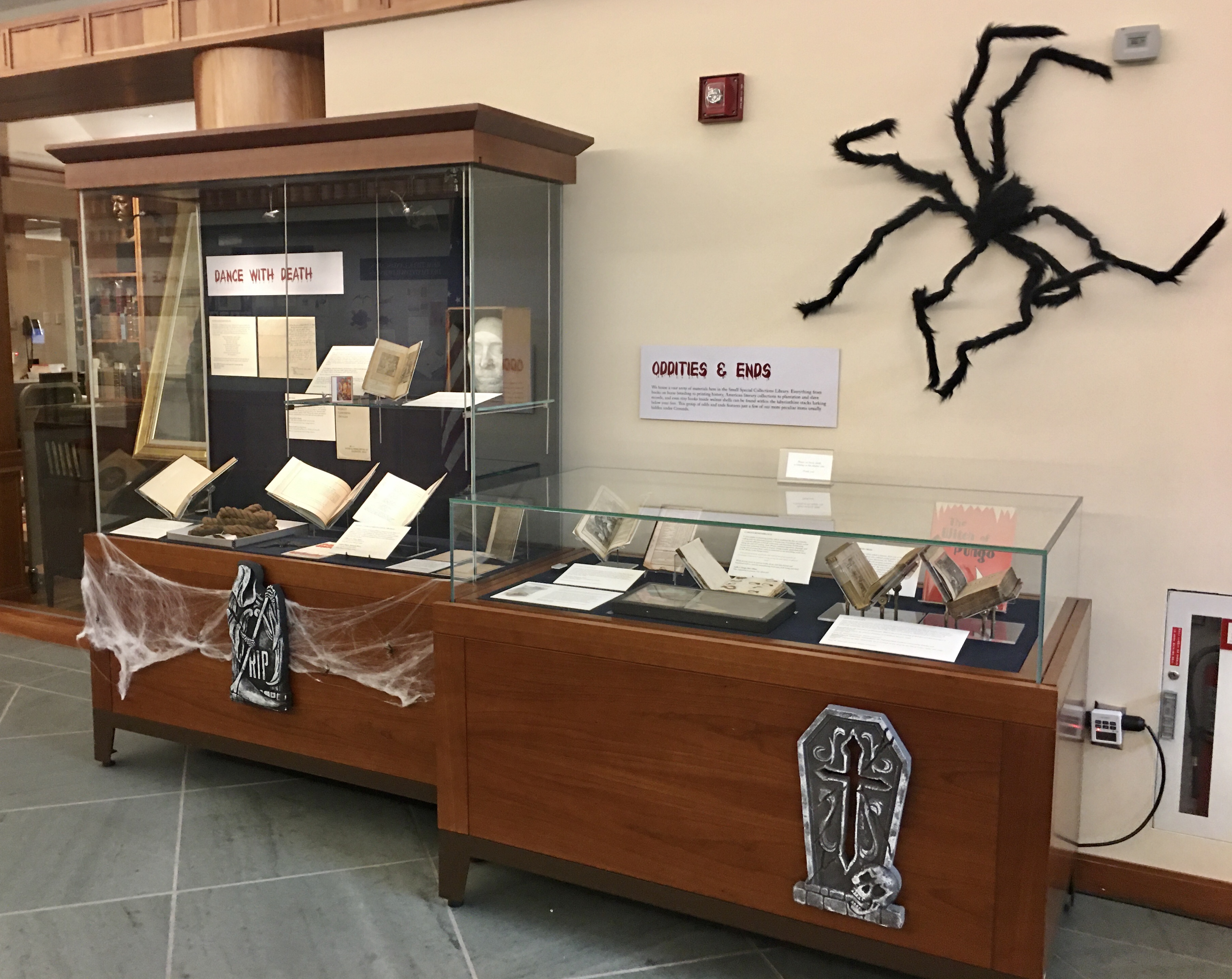 Would you believce that’s a real spider on the wall? Ok, ok, we admit, it’s a facsimile of a spider.

Located just a stone’s throw away from West Range #13—the purported room of the University of Virginia’s masterful matriculate of the macabre, Edgar Allan Poe—lies a subterranean treasure trove of historical and literary scholarship. 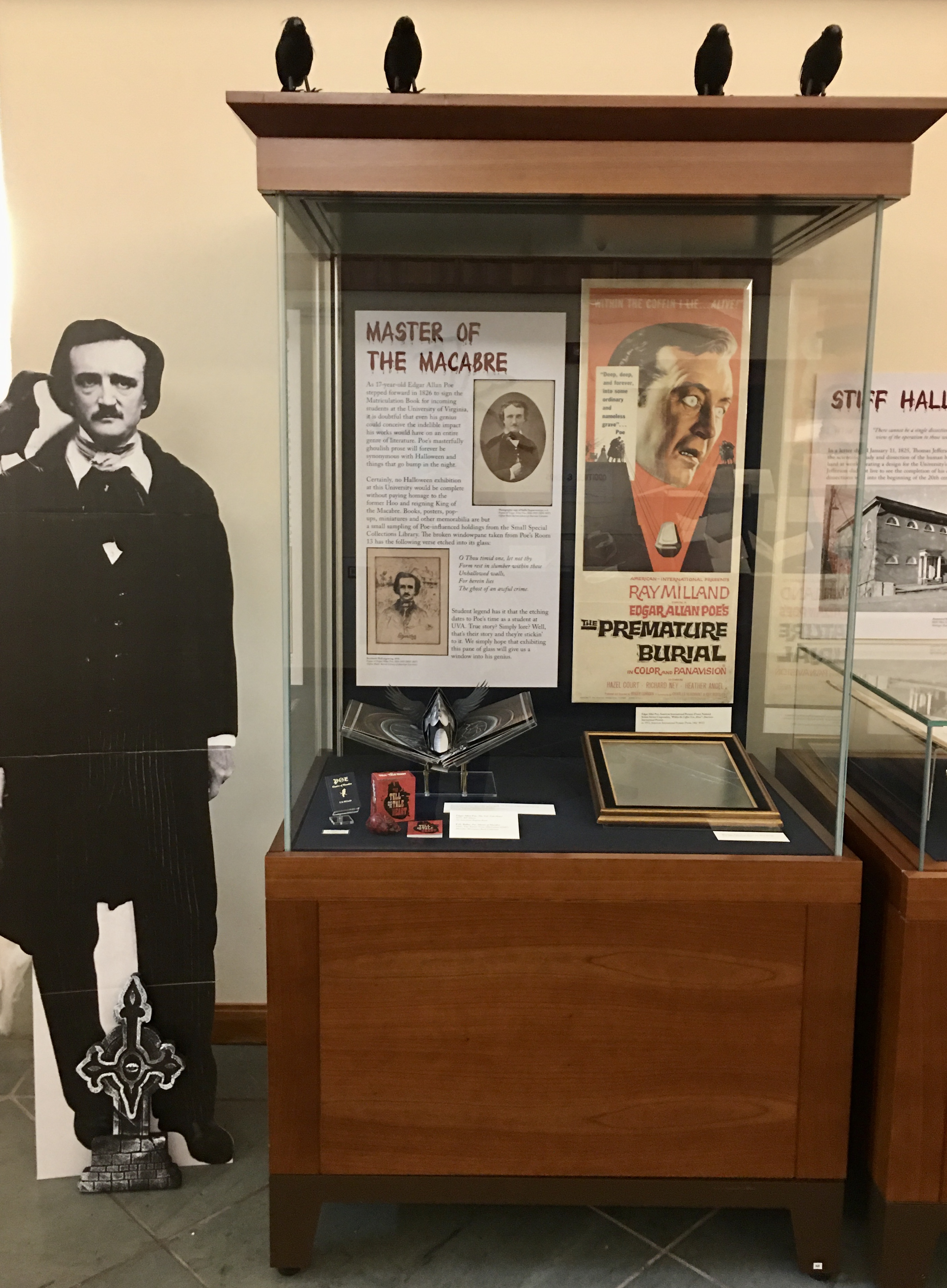 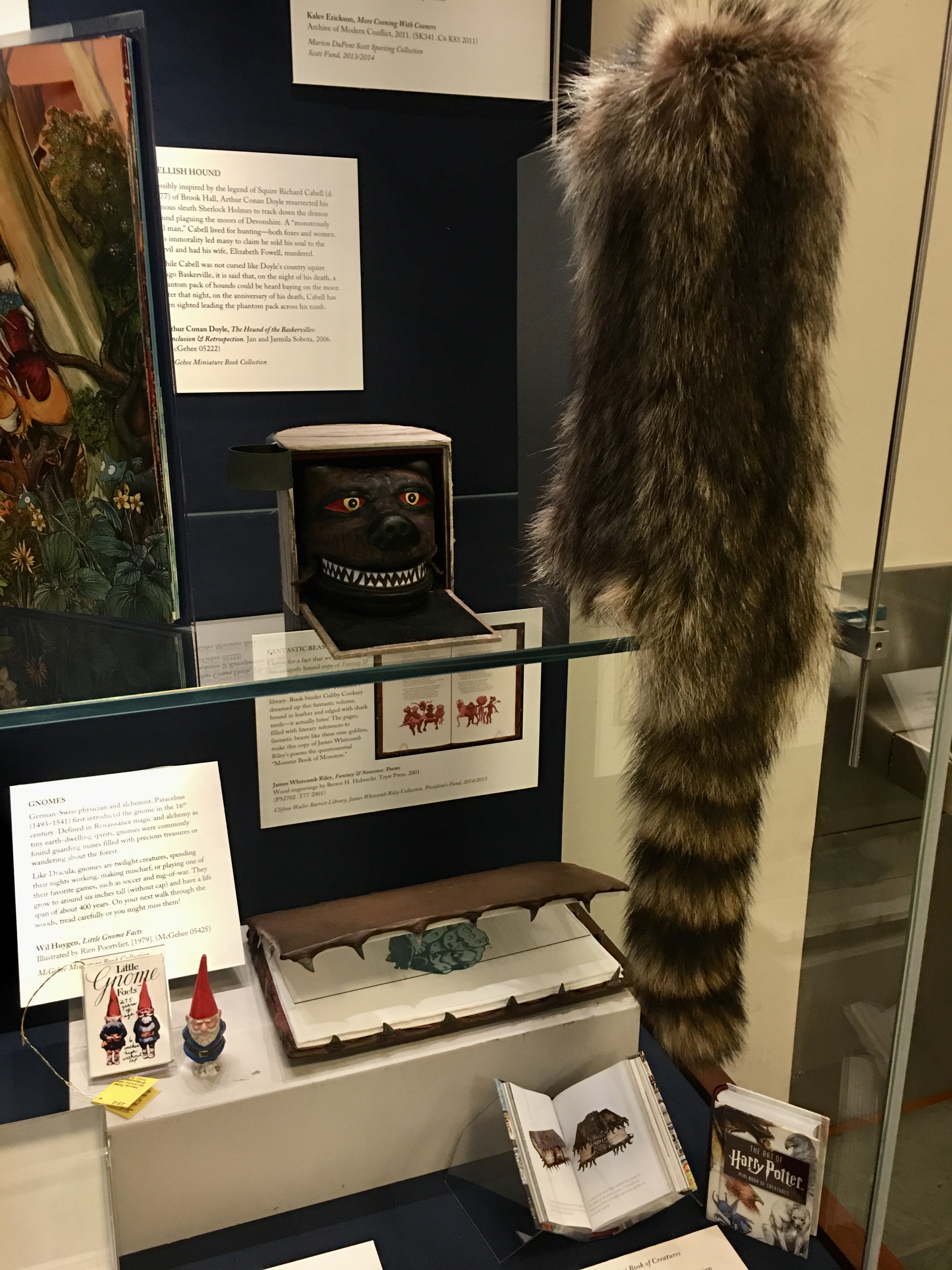 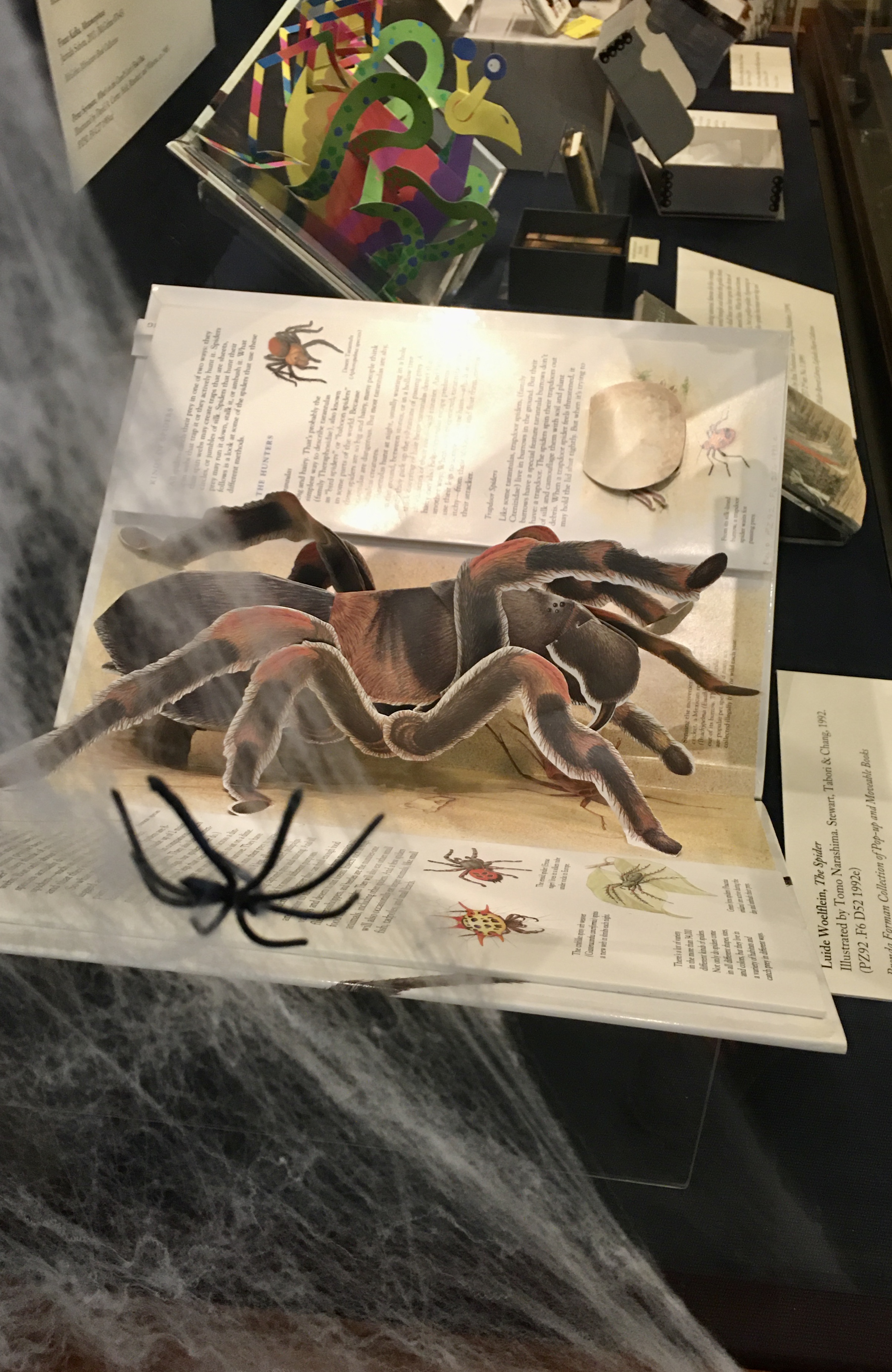 Did you know there are more than 3,000 species of spiders roaming around North America? We even have a few right here in the stacks, including The Spider written by Luide Woelflein and illustrated by Tomo Narashima (PZ92 .F6 D52 1992e) from the Brenda Forman Collection of Pop-up and Moveable Books. 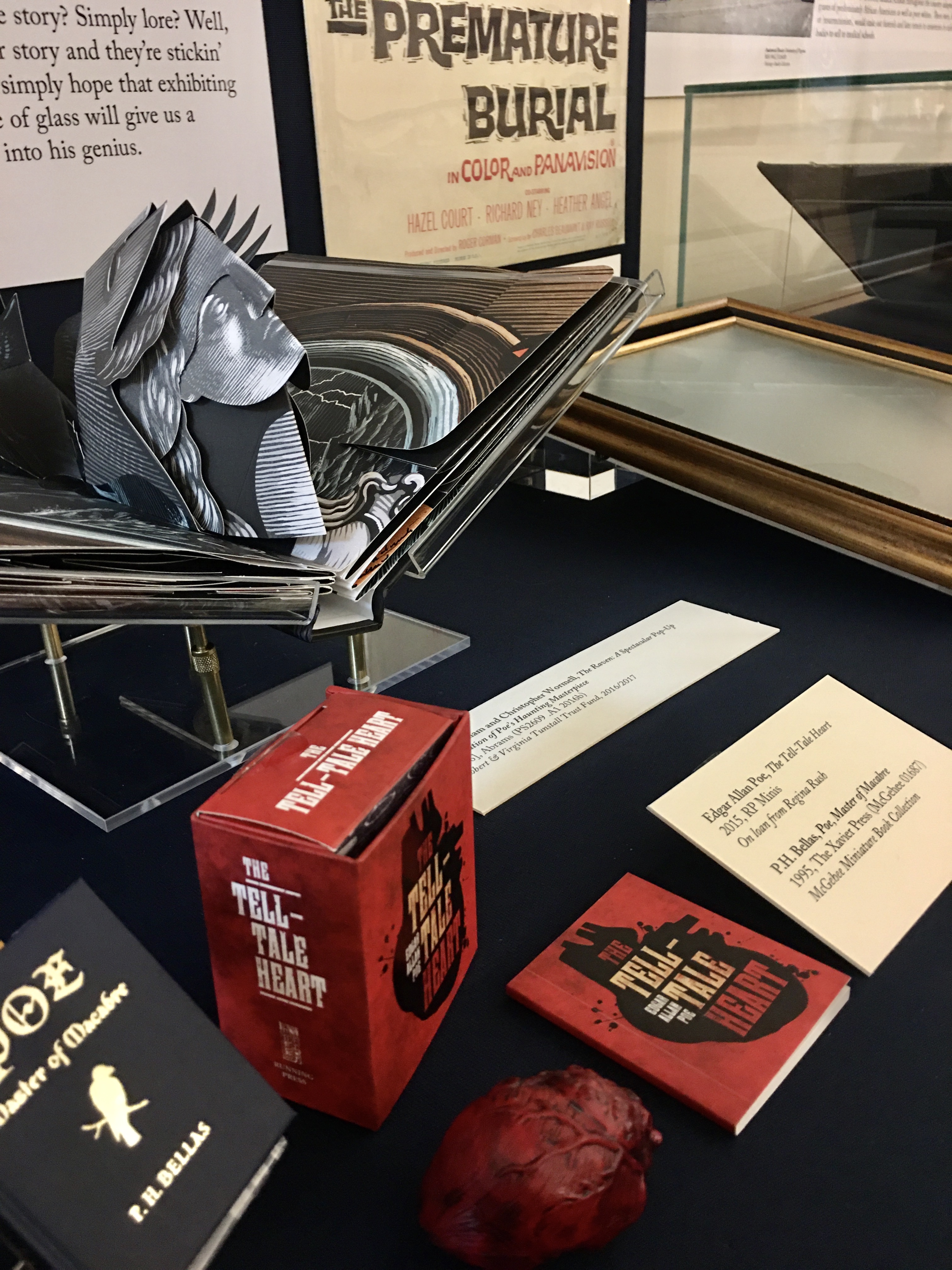 No Halloween exhibition at this university would be complete without paying homage to the former Hoo and reigning Master of the Macabre, Edgar Allan Poe. Books, including miniatures (The Tell-Tale Heart, 2015, on loan from private collection and Poe, Master of Macabre, McGehee 01687 -McGehee Miniature Book Collection) and pop-ups (The Raven: A Spectacular Pop-Up Presentation of Poe’s Haunting Masterpiece, PS2609 .A1 2016b -Robert & Virginia Tunstall Trust Fund) are but a small sampling of Poe-influenced holdings. The broken windowpane on view in the exhibition—rumored to be from Poe’s Room 13 on the West Range—has the following verse etched into its glass: “O Thou timid one, let not thy/ Form rest in slumber within these/ Unhallowed walls,/ For herein lies/ The ghost of an awful crime.” 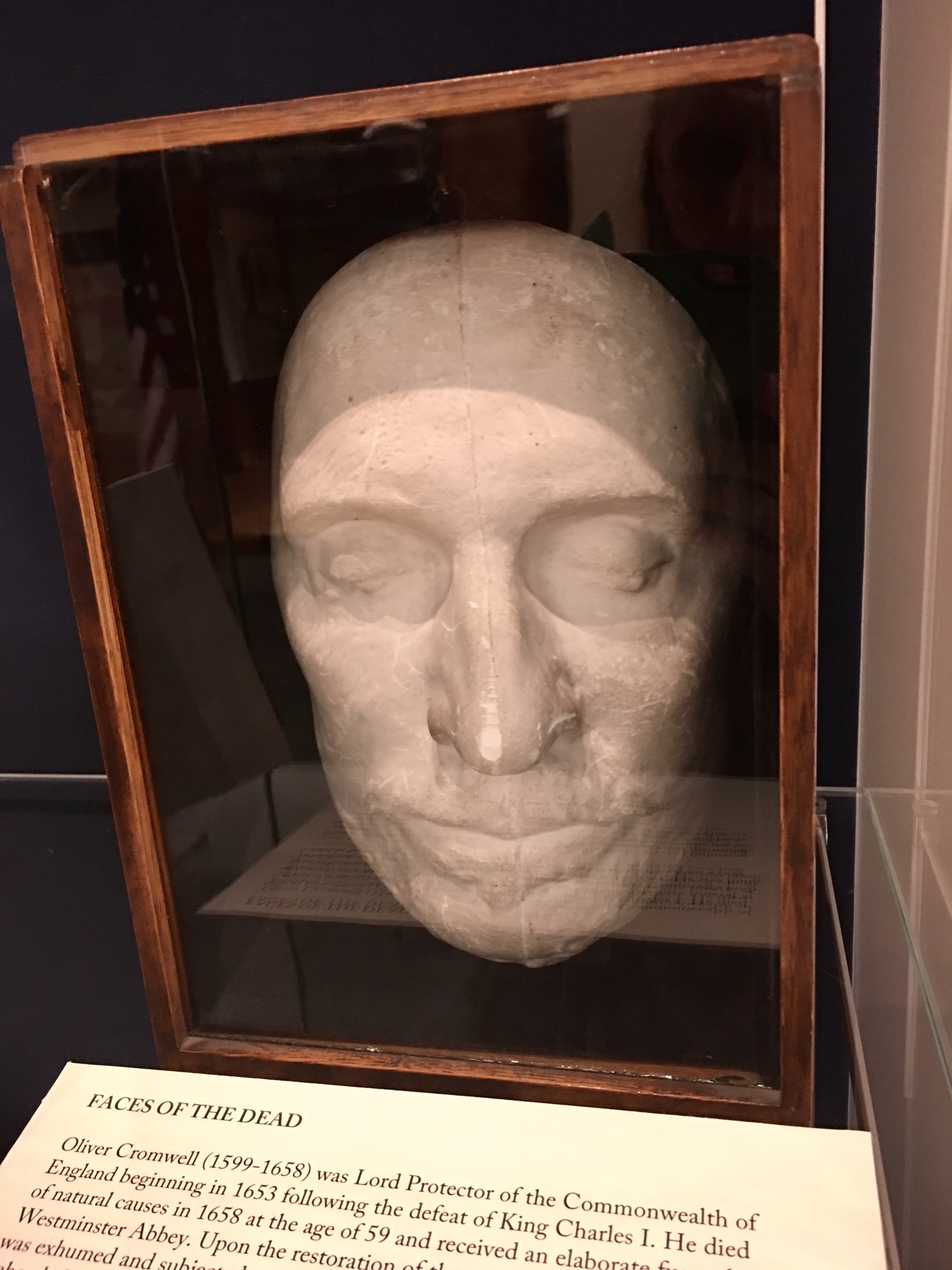 Oliver Cromwell, Lord Protector of the short-lived Commonwealth of England following the defeat of King Charles, died of natural causes in 1658. Upon the restoration of the monarchy in 1661, Cromwell’s body was exhumed and subjected to a posthumous execution: he was hanged, beheaded, and his body thrown into a pit. His head was displayed on a pole outside Westminster Hall until 1685. This plaster cast is a copy from one of several death masks created(by pouring plaster or wax over the deceased’s face shortly after death)following Cromwell’s death in 1658, prior to his grim exhumation. (MSS 5368-a-Gift of Charles C. Abbott).

Come meet James Steele, the Revolutionary War soldier who lost his head and lived to tell about it. Have a Dance with Death…or, perhaps, you may want to sample an embalming recipe that’s simply to die for. As you explore this exhibition, we hope you will go, in the words of Edgar Allan Poe,“deep into that darkness peering…wondering, fearing, doubting,dreaming dreams no mortal dared to dream before.”Come and See…If You Dare!

What Lies Beneath is on view in the First Floor Gallery of Harrison/Small through December 21, 2019.

One thought on “On View Now: What Lies Beneath (Visit if you dare…)”