On October 9, 1967, William Styron’s novel from history, The Confessions of Nat Turner, was published to acclaim and controversy. Styron was raised in Newport News, Virginia, about a hundred miles from the site of the rebellion in Southampton County, Virginia. The novel was awarded the Pulitzer Prize, despite controversy over its characterization of Turner and other characters, and the fact that it was written in the voice of a Black man by a white writer. The novel remains in print today, and is still widely read. 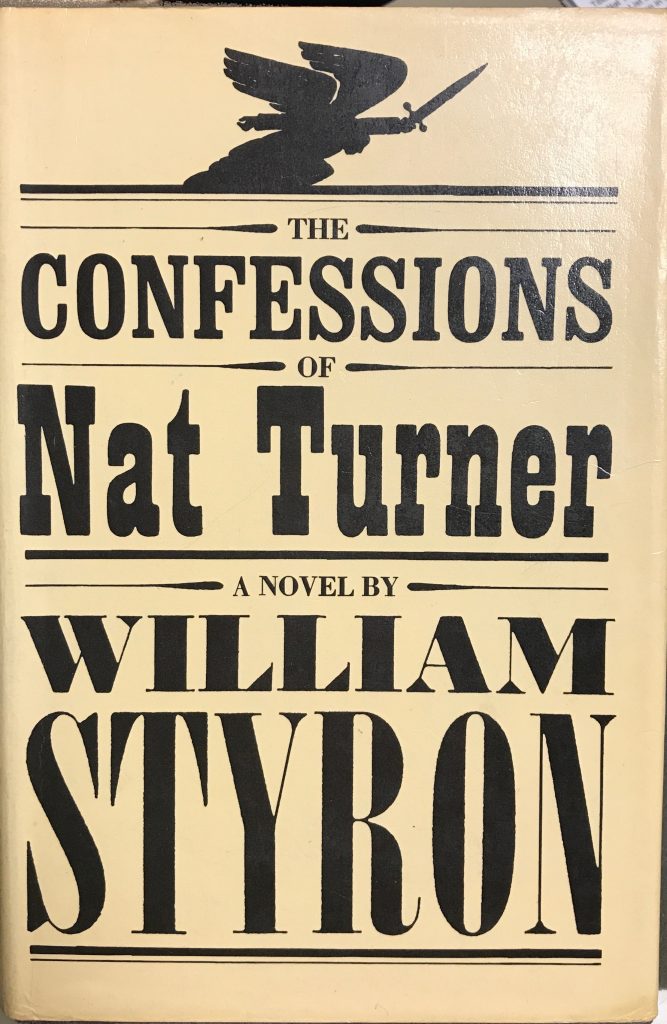 Our strong holdings in the history of Virginia include some of the essential source material upon which Styron based the novel. Of particular importance was this text, first published in 1831. It is written in the form of an interview with Turner, who tells his tale in the first person: 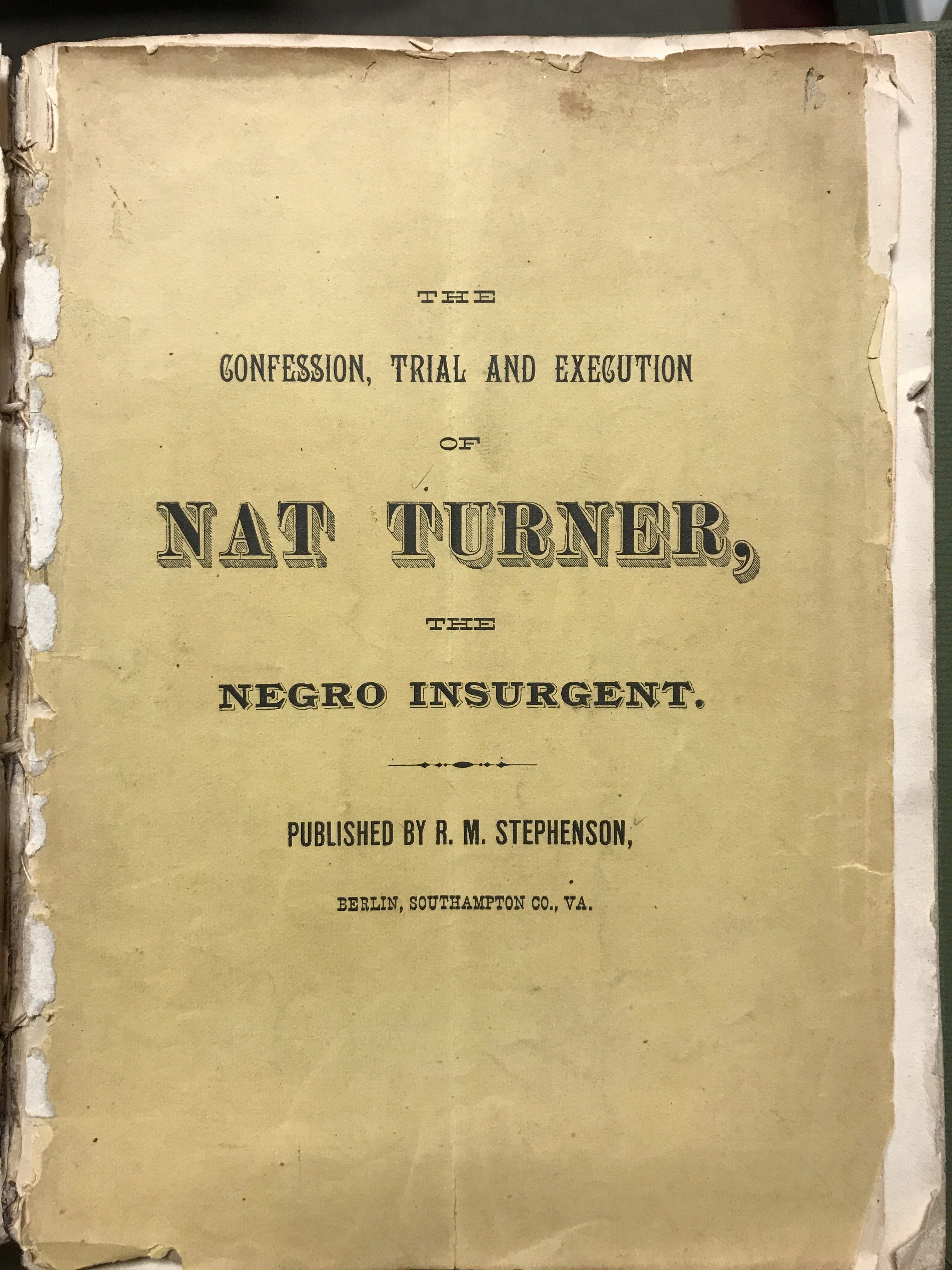 Also in the collections is another period narrative, shown below. this item is digitized in full and available online: 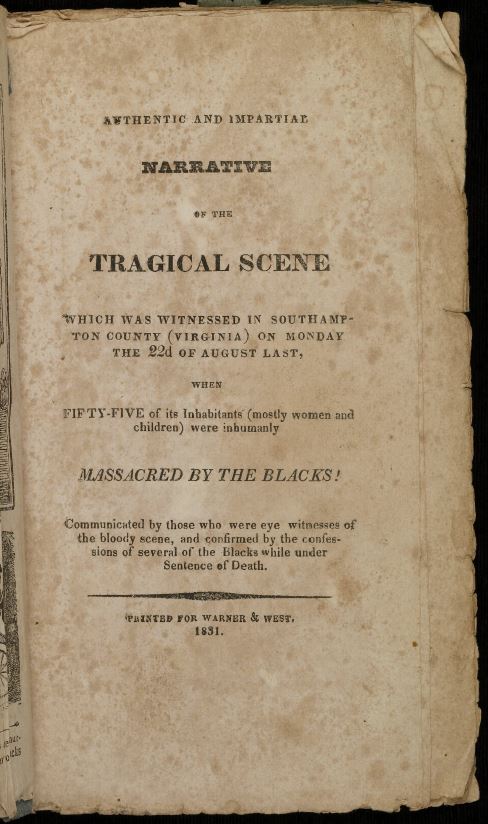 “Authentic and Impartial Narrative of the Tragical Scene Which Was Witnessed in Southampton County (Virginia) on Monday the 22d of August Last: When Fifty-Five of Its Inhabitants (Mostly Women and Children) Were Inhumanly Massacred by the Blacks! : Communicated by Those Who Were Eye Witnesses of the Bloody Scene, and Confirmed by the Confessions of Several of the Blacks While Under Sentence of Death” [New York]: Printed for Warner & West., 1831. (A1831 .W377)

Styron is also known to have depended on the following two volumes for his project, copies of both of which are likewise held in our collections: 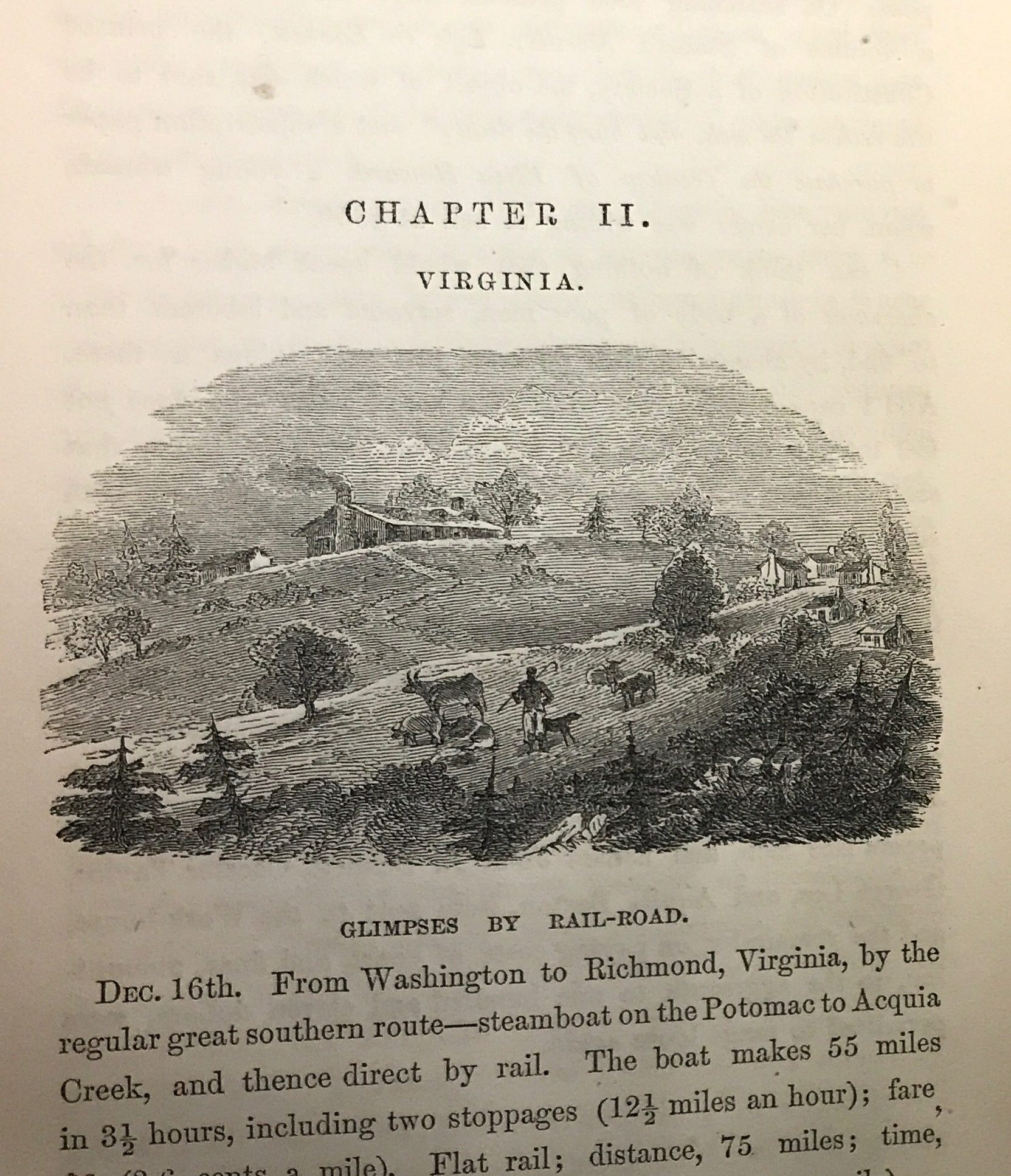 Almost half of Frederick Law Olmstead’s” A Journey in the Seaboard Slave States: With Remarks on Their Economy” (New York: Dix & Edwards,1856) is dedicated to Virginia. (A1856 .O55) 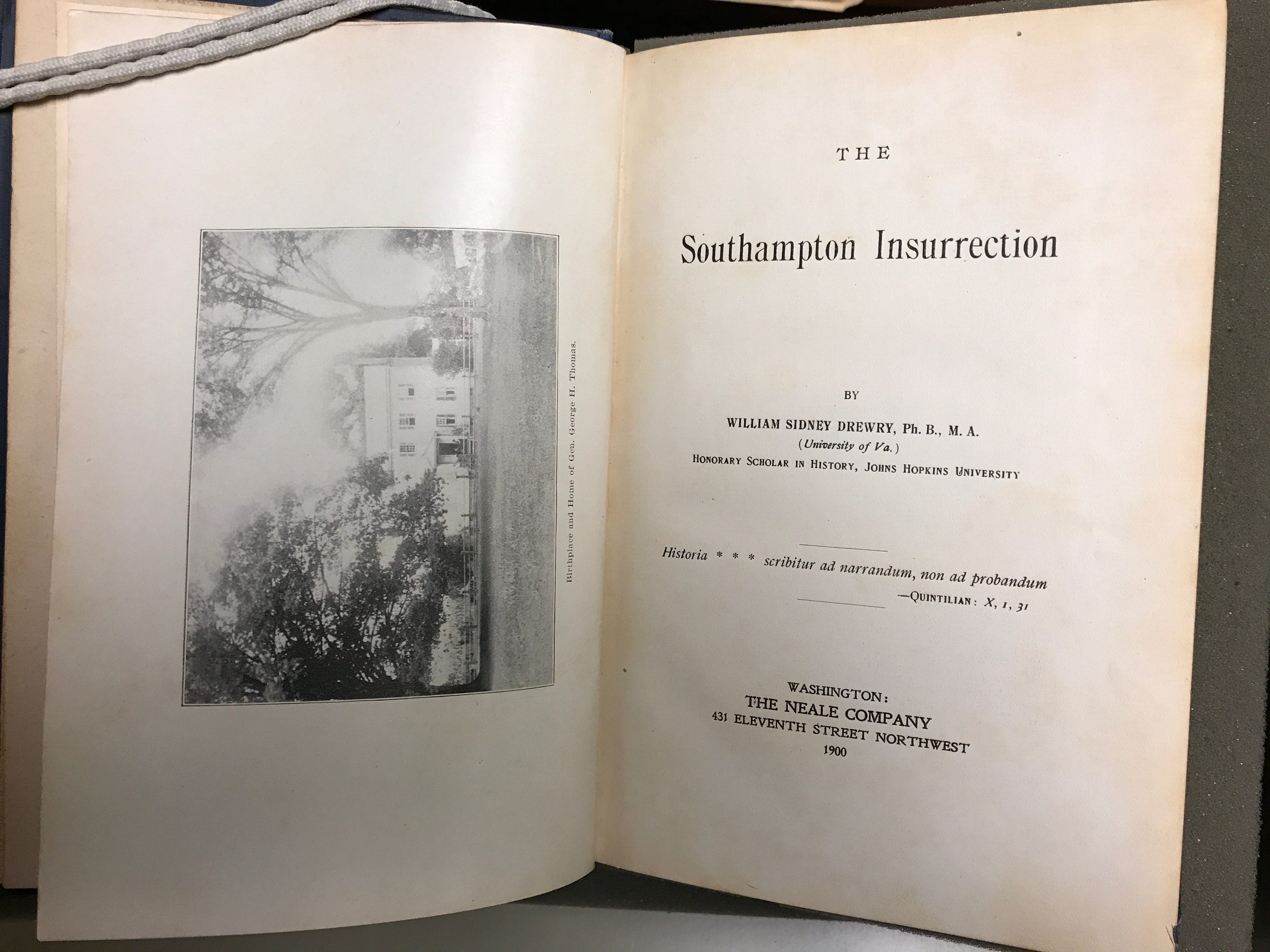 Finally, Styron depended upon M. Boyd Coyner’s UVA dissertation based upon our Cocke family papers collection. As James West tells it, “Styron was alerted to the existence of the dissertation by C. Vann Woodward, and Styron secured a copy of it from Coyner, who was then teaching at Hampden-Sydney.” 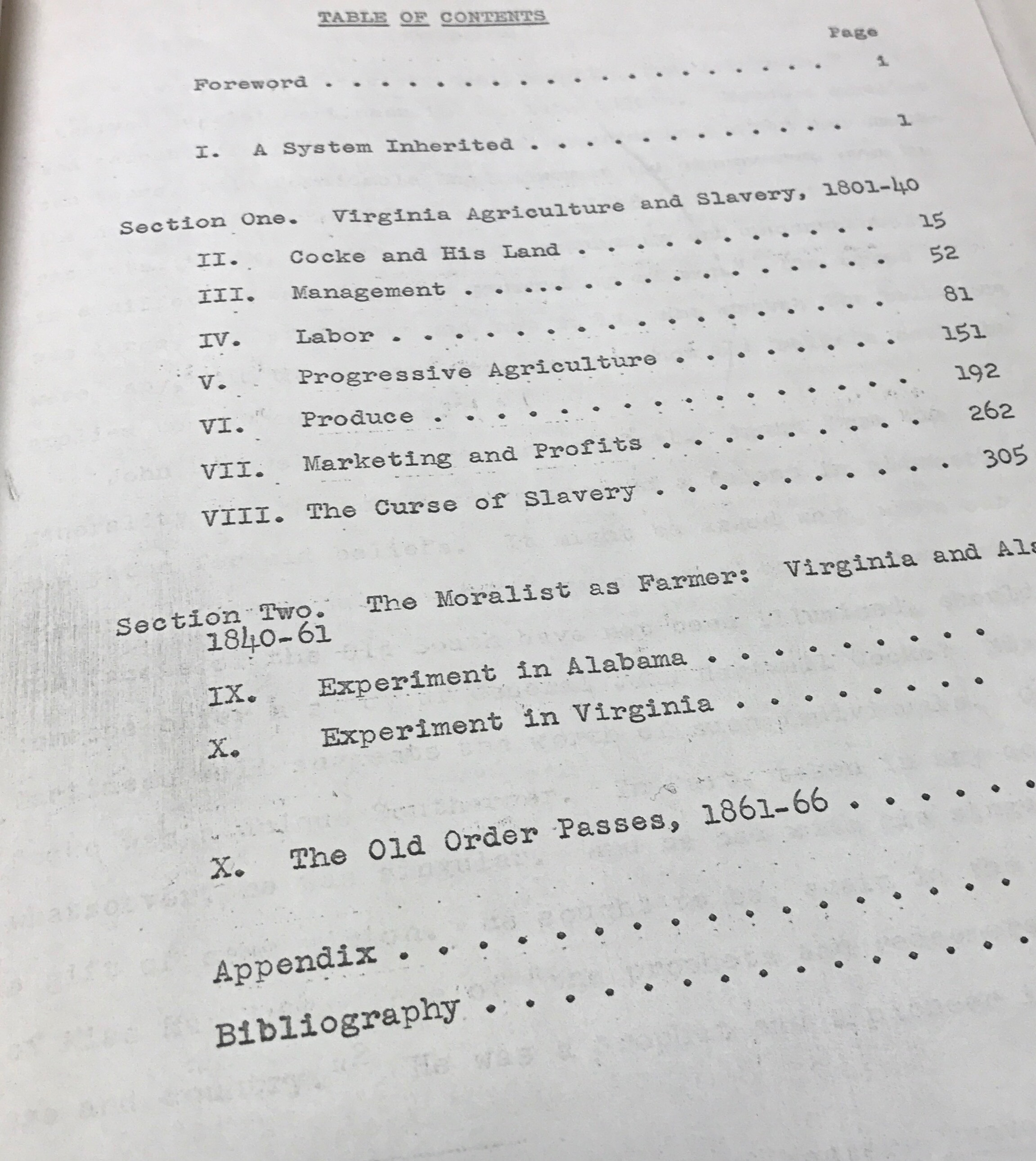 The table of contents page of M. Boyd Conyer,  “John Hartwell Cocke of Bremo: Agriculture and Slavery in the Ante-bellum South.” (Diss. 992).

Thanks to donor and Styron bibliographer James West for calling our attention to this anniversary and these fantastic source materials!