From 1954 to 1956, at the height of the McCarthy Era and at the time the Supreme Court decision in Brown vs. the Board of Education launched the modern Civil Rights movement, Jacob Lawrence painted thirty history paintings encompassing the period from the American Revolution to early westward expansion. Thirteen of the resulting panels from the series, Struggle…from the History of the American People, are currently on display at UVA’s Fralin Museum of Art (September 3 –June 5, 2016).

Lawrence wanted to portray “not only the struggle and contribution of the Negro people, but also…the rich and exciting story of all the people who immigrated to the New World and contributed to the creation of the United States.” His colorful, dynamic, and highly symbolic imagery, paired with titles that are often quotations from historical documents, recasts familiar historical subjects and invites new understandings about the foundation of our country.

In conjunction with this exhibition, the Albert & Shirley Small Special Collections Library is pleased to host a small exhibition featuring speeches, maps, drawings, and books that directly inspired or are historically related to Lawrence’s artworks. Original items from our collectionsare juxtaposed with reduced facsimiles of eight Struggle panels. Six of the panels shown in the Small Library exhibition are on view in their original form at the Fralin.

Like the larger Fralin project, this exhibition was organized by Professor Elizabeth Turner, whose graduate students have spent the last few months combing our collections to find the most salient historical counterparts to Lawrence’s paintings. Graduate students in Art History Chloe Downe and Elyse Justice made the final item selections and composed the layouts and label text. 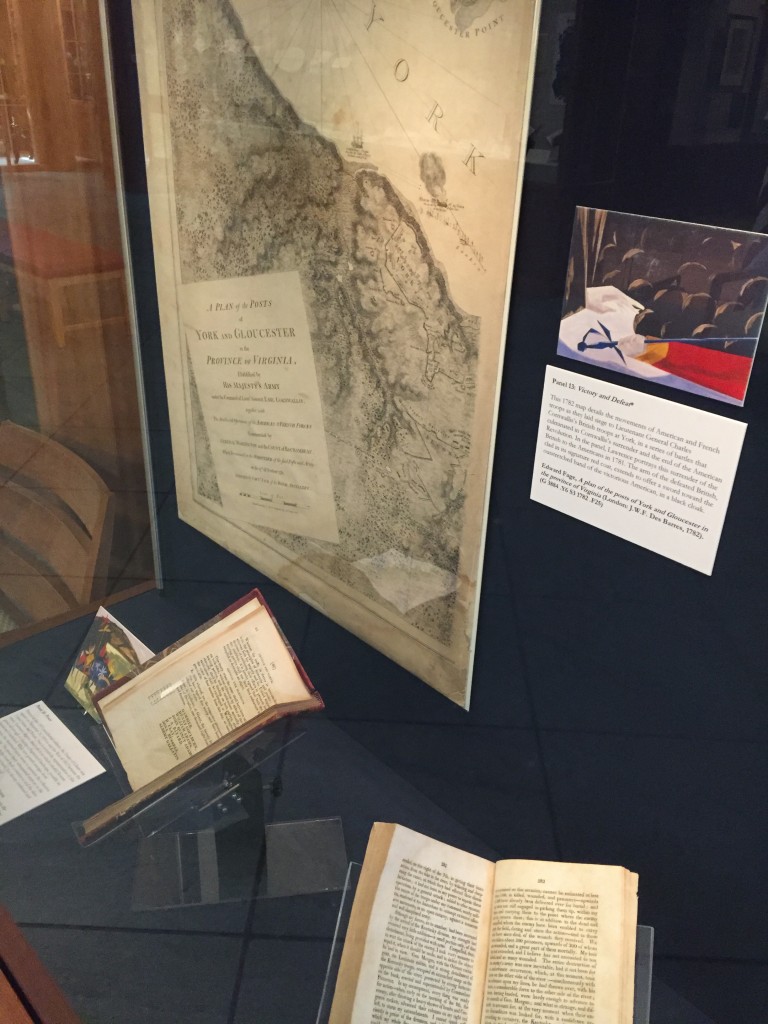 Shown here is a map of the Battle at Yorktown alongside Lawrence’s panel depicting a fallen British redcoat. 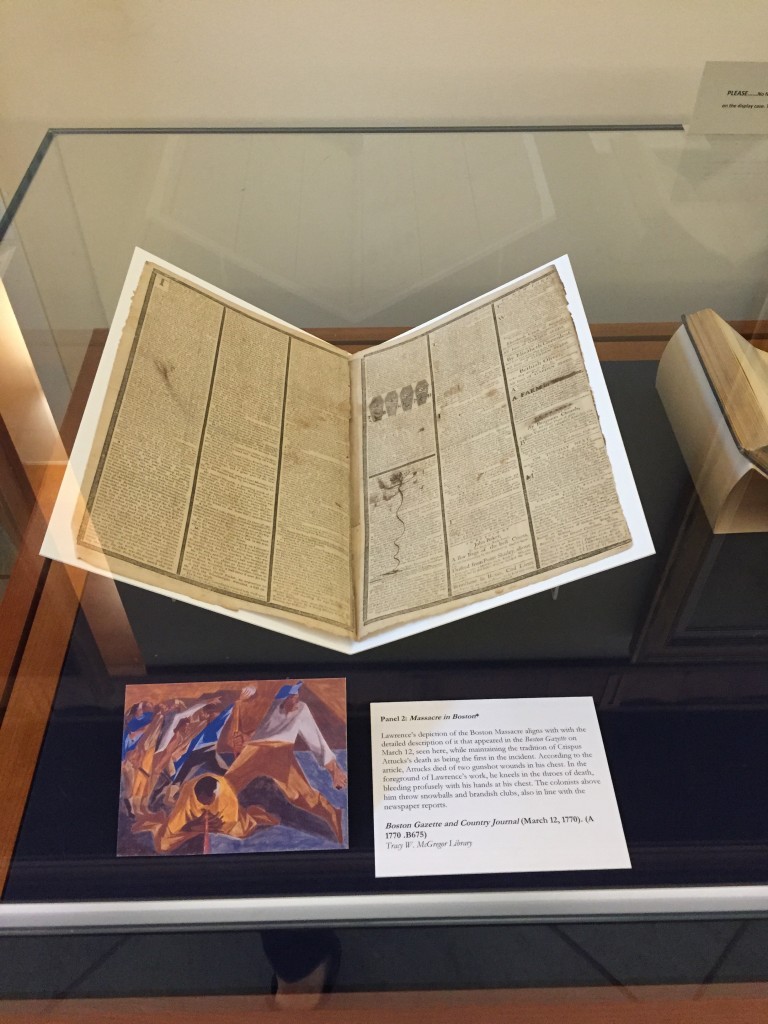 Above Lawrence’s panel, which illustrates the death of Crispus Attucks during the Boston Massacre, is a rare period newspaper account of the event. 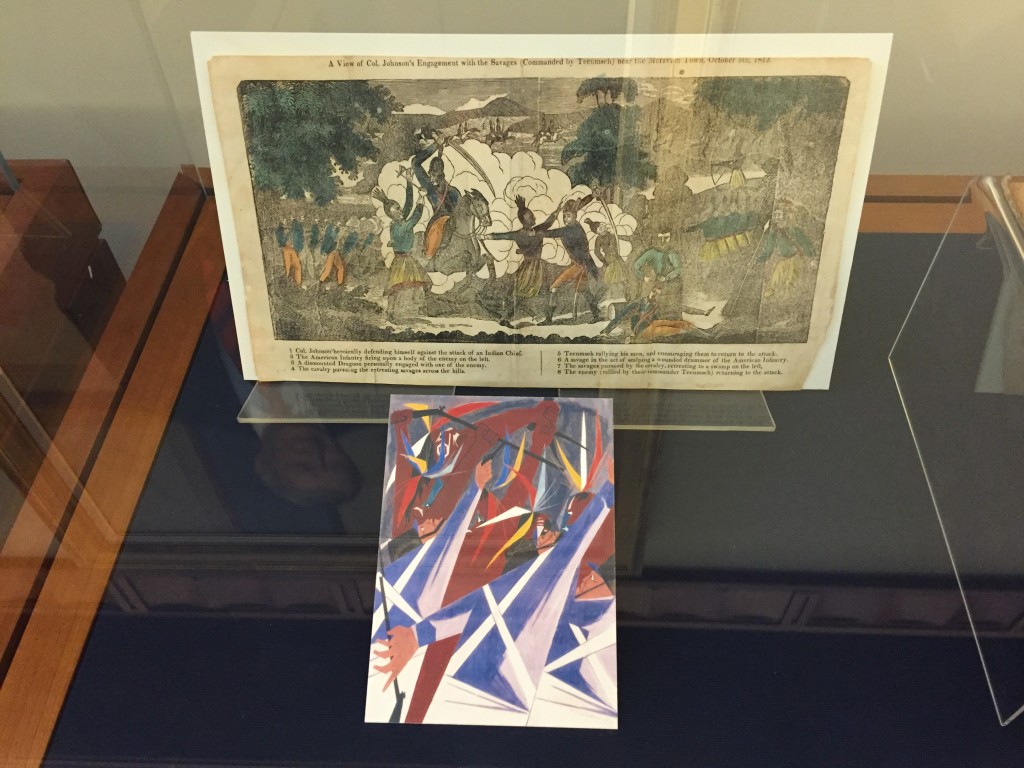 This Lawrence panel shows the British troops and Shawnee warriors, including Tecumseh, at the Battle of Tippecanoe in 1811. The hand-colored broadside above it illustrates the Battle of the Thames in 1813, the last battle between Tecumseh’s warriors and General William Henry Harrison’s trooops. 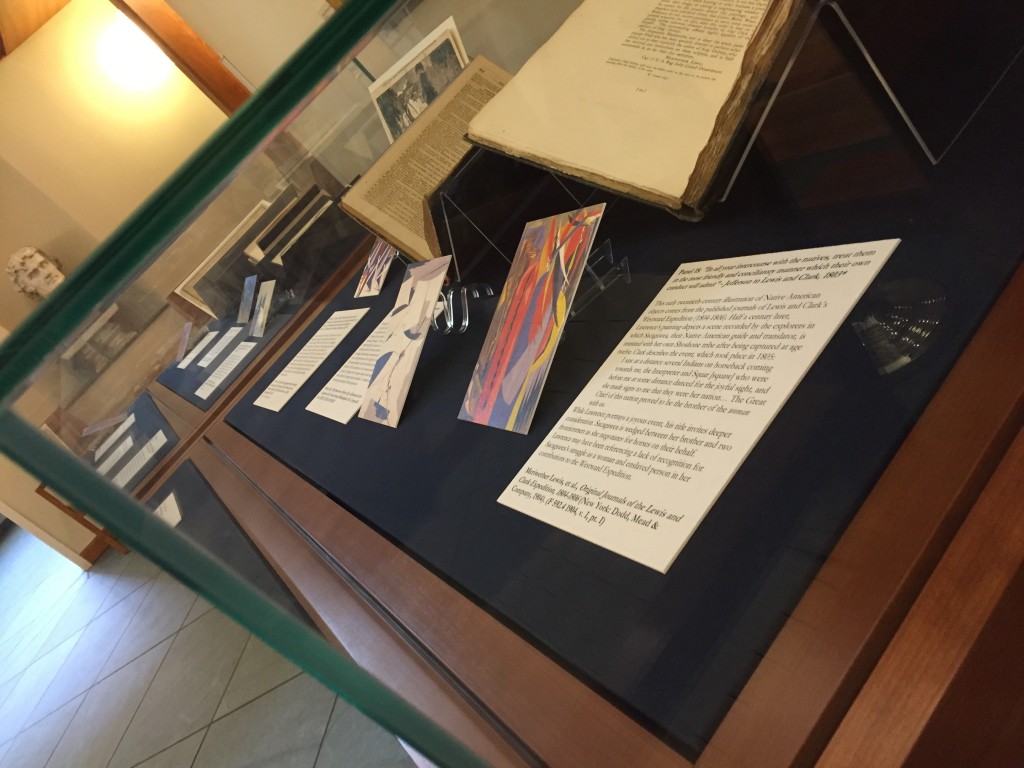 For a new perspective on American history and Lawrence’s works, come see Reading between the Lines of Jacob Lawrence’s Struggle  through May 2016 in the First Floor Gallery.