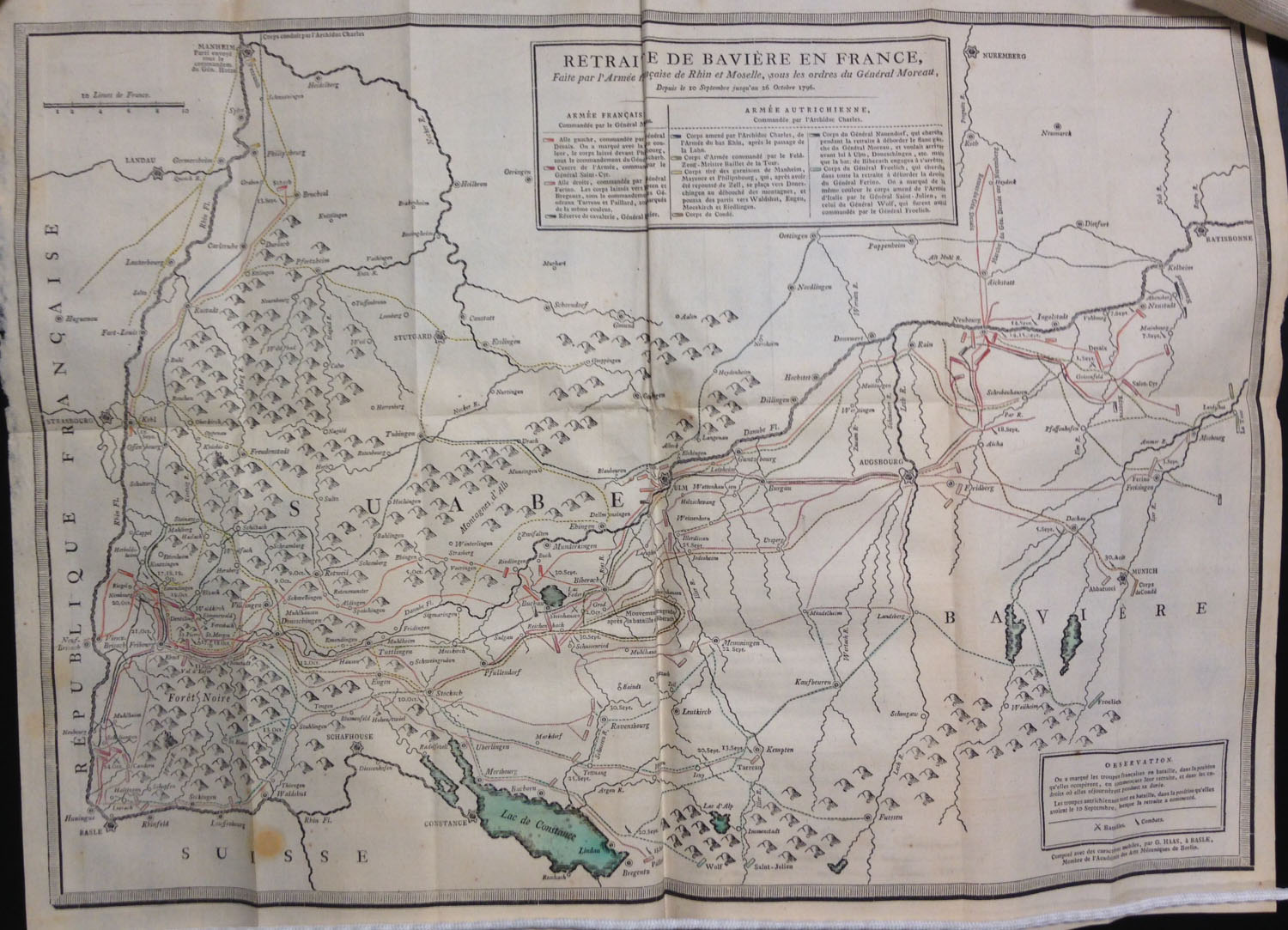 This plate is one of the few known examples of a map set entirely from movable types. Everything—text, borders, and topographic features—has been set by hand using a variety of text fonts as well as a specially designed cartographic font (here heightened with red and greenish-blue hand-coloring). 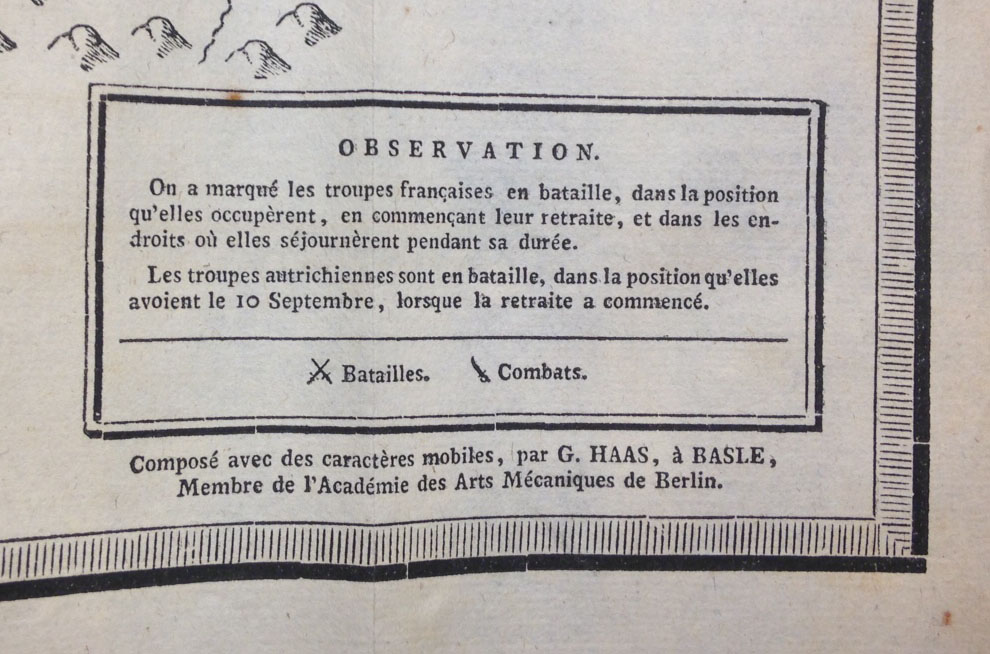 The map, “composed with movable types,” bears the imprint of G[uillaume, i.e. Wilhelm] Haas, the Basel [Switzerland] typefounder who cut and cast the special cartographic font.

Until the later 18th century, maps were printed in one of two ways: either from a relief block (typically a woodcut, with all non-printing areas cut away from the block’s top surface); or from an intaglio plate (typically an engraving, with the map’s lines cut into the surface of a copper plate). The same could be said for nearly all pre-1800 book illustrations, that is, they were produced using a limited repertoire of relief and intaglio processes—chiefly woodcut, wood engraving, engraving, etching, and mezzotint—rather than being set (like text) using fonts of metal type. 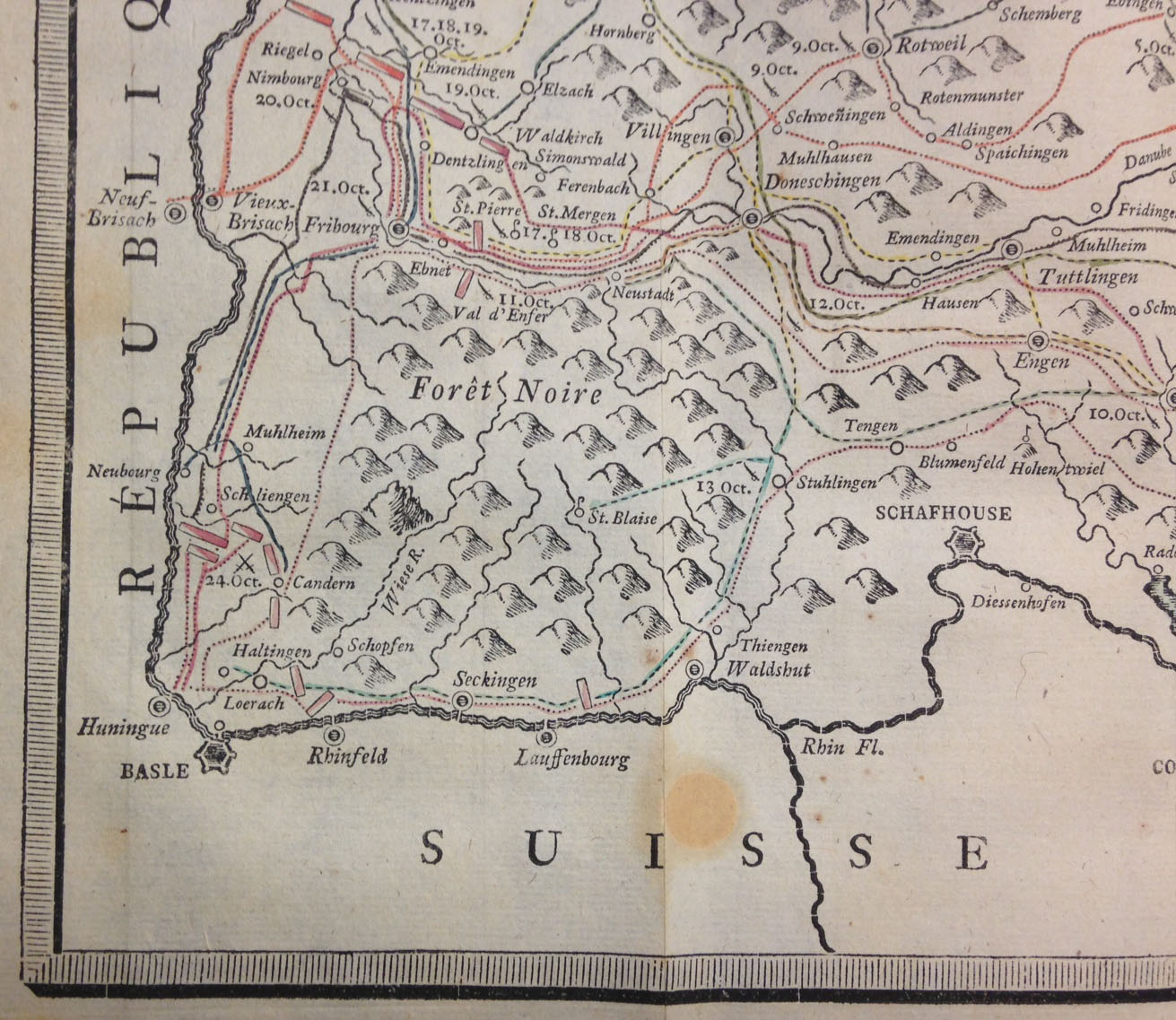 In the early 1770s, August Gottlieb Preuschen of Karlsruhe, Germany, invented an alternative to the printing of maps from engraved copper plates: a 21-character cartographic type font. Preuschen’s idea was realized through the technical skill of Wilhelm Haas, a typefounder in Basel, Switzerland, who perfected and cast the cartographic font and, in 1776, published the first map composed entirely from movable types. Over the next two decades, Haas continued to refine and expand his cartographic font until it contained at least 139 different characters, or “sorts.” These were special symbols, not letters, including 24 designed for depicting streams and rivers, 17 for borders, 14 for roads, 31 for charting military movements, 15 for human habitations, 6 for mountains and forests, and 32 for coastlines. All told, Haas employed his proprietary font to publish approximately two dozen typographic maps, including the “Retraite de Bavière en France … 26 Octobre 1796.” 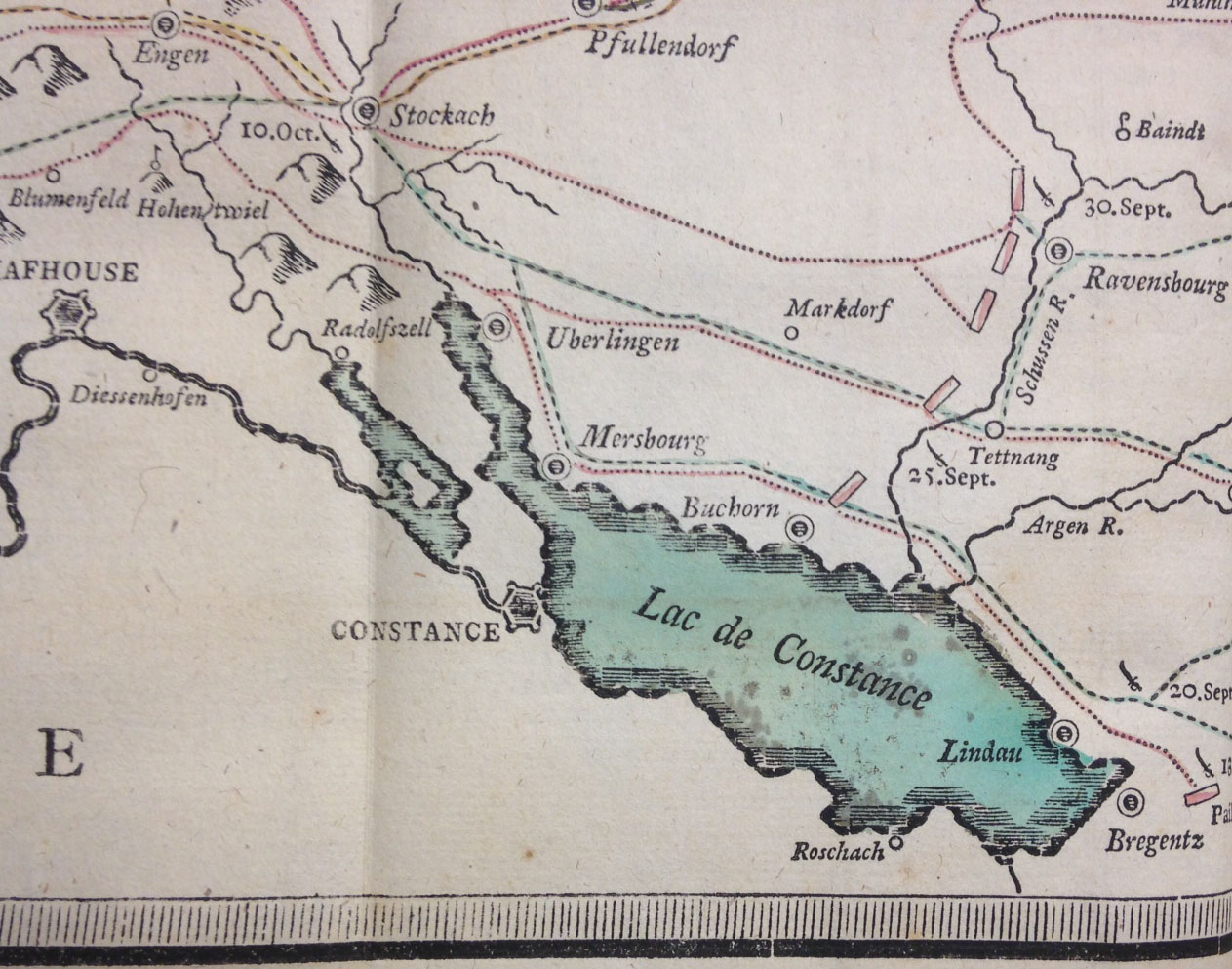 Note how the outline of Lake Constance is formed using separate pieces of type, each consisting of multiple horizontal lines; many of the pieces probably were individually filed down to create custom shapes. The bluish tint and red highlighting were hand-applied.

In setting these maps, Haas’s compositors worked from manuscript maps drawn on gridded paper. By breaking the complex cartographic image into small units, the compositors were better able to translate the image into small blocks of type metal. In doing so they faced two principal problems. First, the twists and turns of rivers and roads could be approximated but not rendered exactly, as could be done through engraving. Second, great care was needed to “lock up” these disparate assemblages of movable types so that they would not shift during printing. Type fonts are designed so that each sort has the same height, or “body size.” As long as each horizontal row of movable type contains sorts of the same height, a page consisting of several thousand small rectangles of metal type will “lock up” easily. Because Haas’s cartographic font contained sorts with a range of body sizes, which could not be arranged into uniform rows, it was necessary to painstakingly add filler material to the irregular gaps between types. In essence, the process was more like assembling a mosaic than setting type. 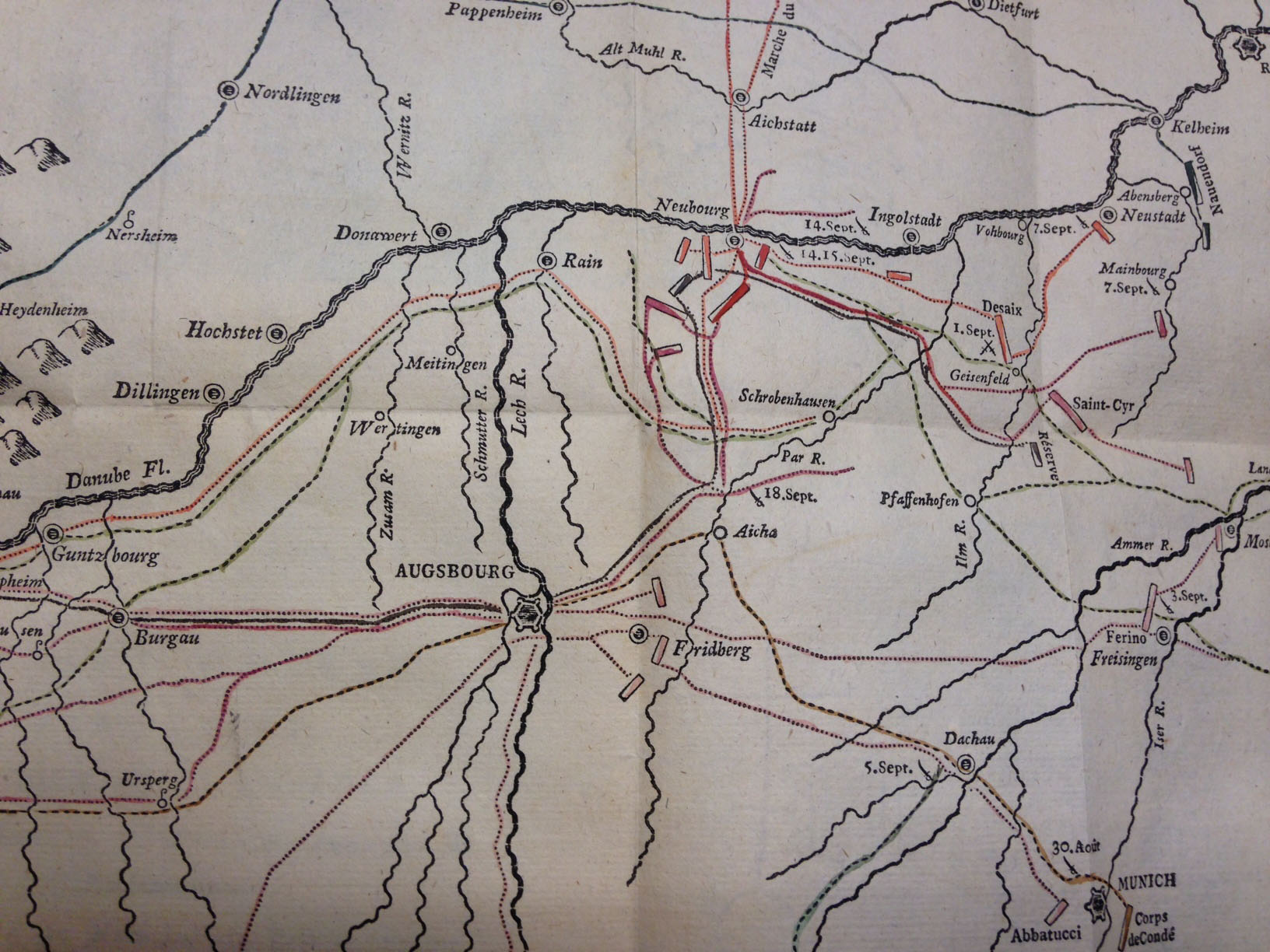 In principle, Haas’s cartographic font could claim several advantages over copperplate engraving: maps could be prepared more quickly, revision was easier, and unlimited impressions could be taken. But decided disadvantages remained for the prospective map publisher: only a limited level of accuracy could be achieved, and a large initial investment would be necessary to purchase the requisite types. Soon, however, the invention of lithography (and later, wax engraving) gave cartographers a far easier method for reproducing maps accurately, and Haas’s font was never adopted by other map publishers.

One thought on “This Just In: Mapping with Movable Types”