This week we are pleased to feature a guest post by Jessica Showalter. Showalter was a Lillian Gary Taylor Fellow at the Harrison Institute in 2013. She is a doctoral candidate in the Literature & Criticism program at Indiana University of Pennsylvania. Below, Jessica explains why she ended up spending two weeks of her fellowship studying two books that she had expected to peruse for perhaps an hour.

I suppressed a squeal when I opened Copy 1 of Edward Le Roy Rice’s Monarchs of Minstrelsy (1911). The book is a 350-page early history of minstrel shows, the ubiquitous nineteenth-century pop culture phenomenon which combined song, dance, and comic sketches based on racist stereotypes. The Albert and Shirley Small Special Collections Library holds two annotated copies of Monarchs of Minstrelsy. Although I had examined a digitized copy on Google Books a few months before coming to Charlottesville, I figured the annotations might be worth a glance. 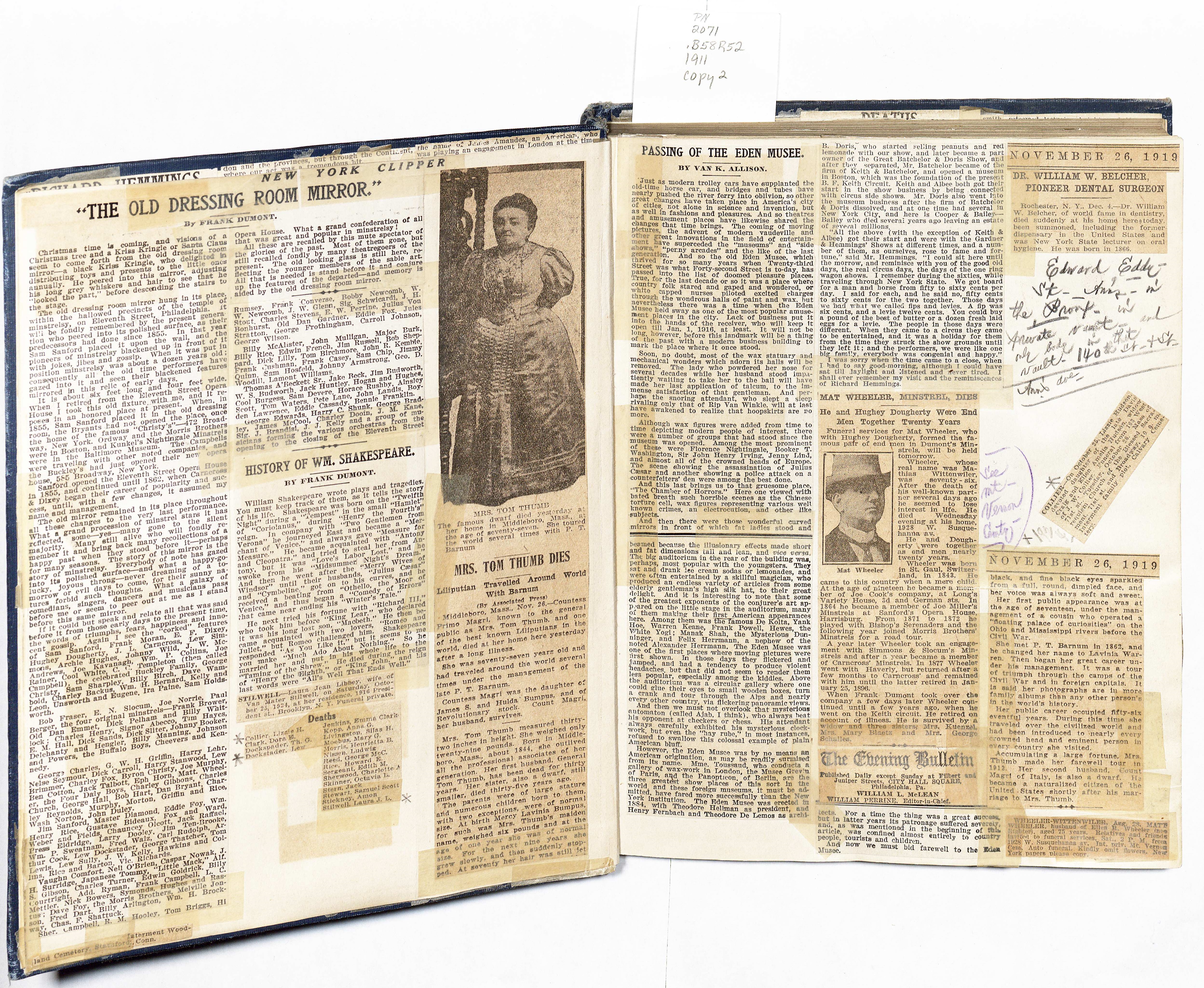 Imagine my surprise when I surveyed the extent of the annotations—the books resembled scrapbooks. Newspaper clippings about minstrel performers were crammed into any available white space. Many of these newspaper stories were new to me, even though I had examined minstrelsy-related articles in digitized nineteenth-century newspaper databases. Many newspapers have not yet been digitized, and may never be.

One clipping told the story of Charlie Bensel, a minstrel performer who was shipwrecked in Peru en route to California during the Gold Rush. Finally arriving in San Francisco with only his banjo, Bensel exchanged music for food until he found a job in the mines. Later, Bensel started a minstrel company that toured China. Another clipping about the minstrel William Blakeney reported that he performed in Australia, India, Japan, the South Seas, and England during the 1870s. These kinds of stories helped my quest to track down the international routes of traveling minstrel performers for a chapter in my dissertation, Hemispheric Minstrelsies: Race, Nation, and Empire in Nineteenth-Century Performance.

In addition to pasted-in newspaper clippings, these copies of Monarchs of Minstrelsy were peppered with penciled notes supplementing the book’s biographies of minstrel performers. The book’s unidentified owner visited the graves of many of these minstrels to fact-check Rice’s biographies. For instance, a note on page 15 in Copy 2 edits the famous performer Frank Brower’s birthday—according to his tombstone, he was born November 30th, not November 20th. 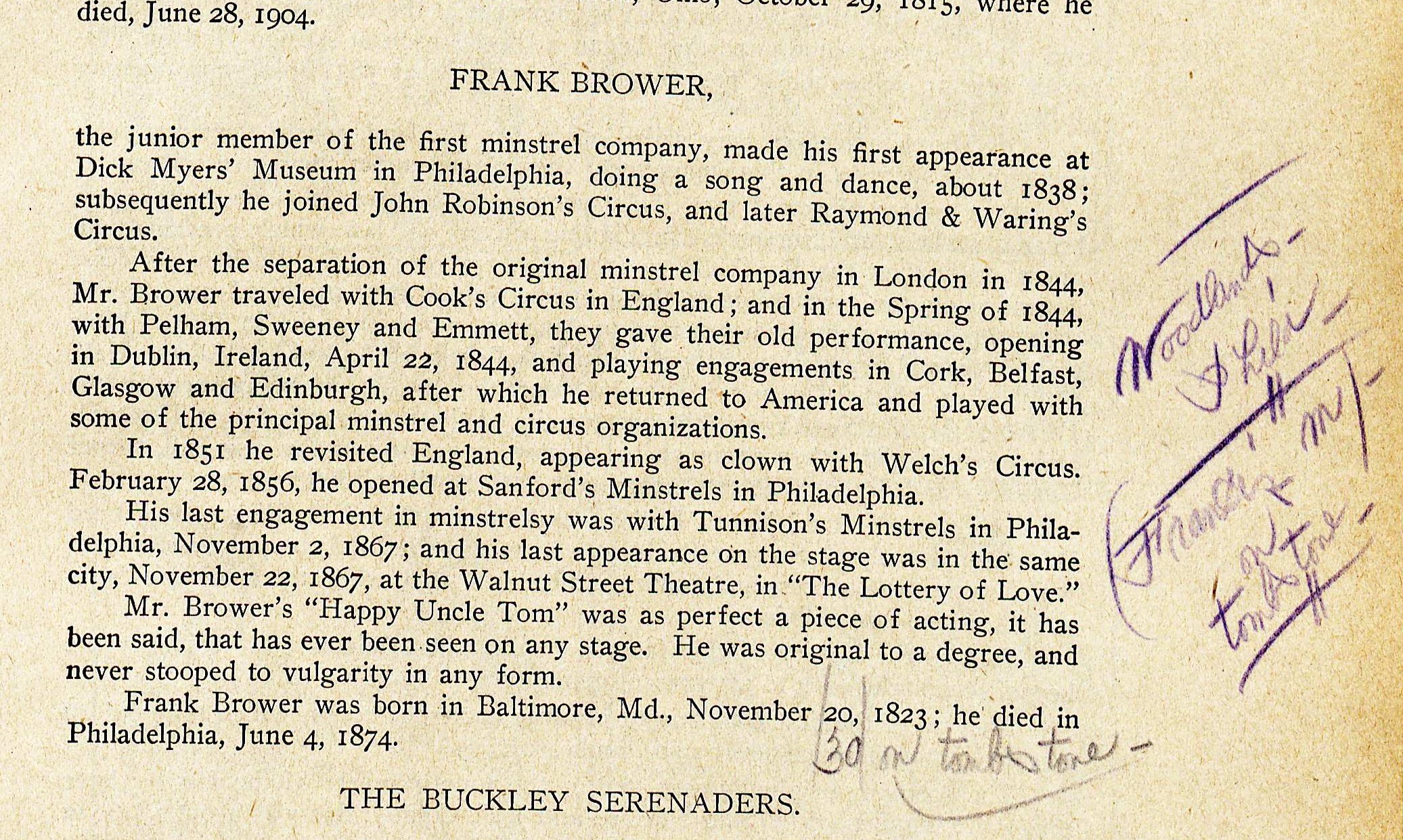 Sometimes, these marginal notes describe the condition of the gravesites, noting whether they were well-kept or neglected and overgrown. In cases where visits were impractical, the book’s owner corresponded with cemetery managers via mail and inserted the correspondence in one of the copies of the book. One letter from 1913 confirms the location of Charles Backus’ grave in Rochester, NY; another letter from 1915 confirms the burial of Harry (Henry) B. Macarthy in San Francisco. Copy 1 even includes a letter from the American Consul in Moscow about the performer Charley Sutton Leman’s burial. 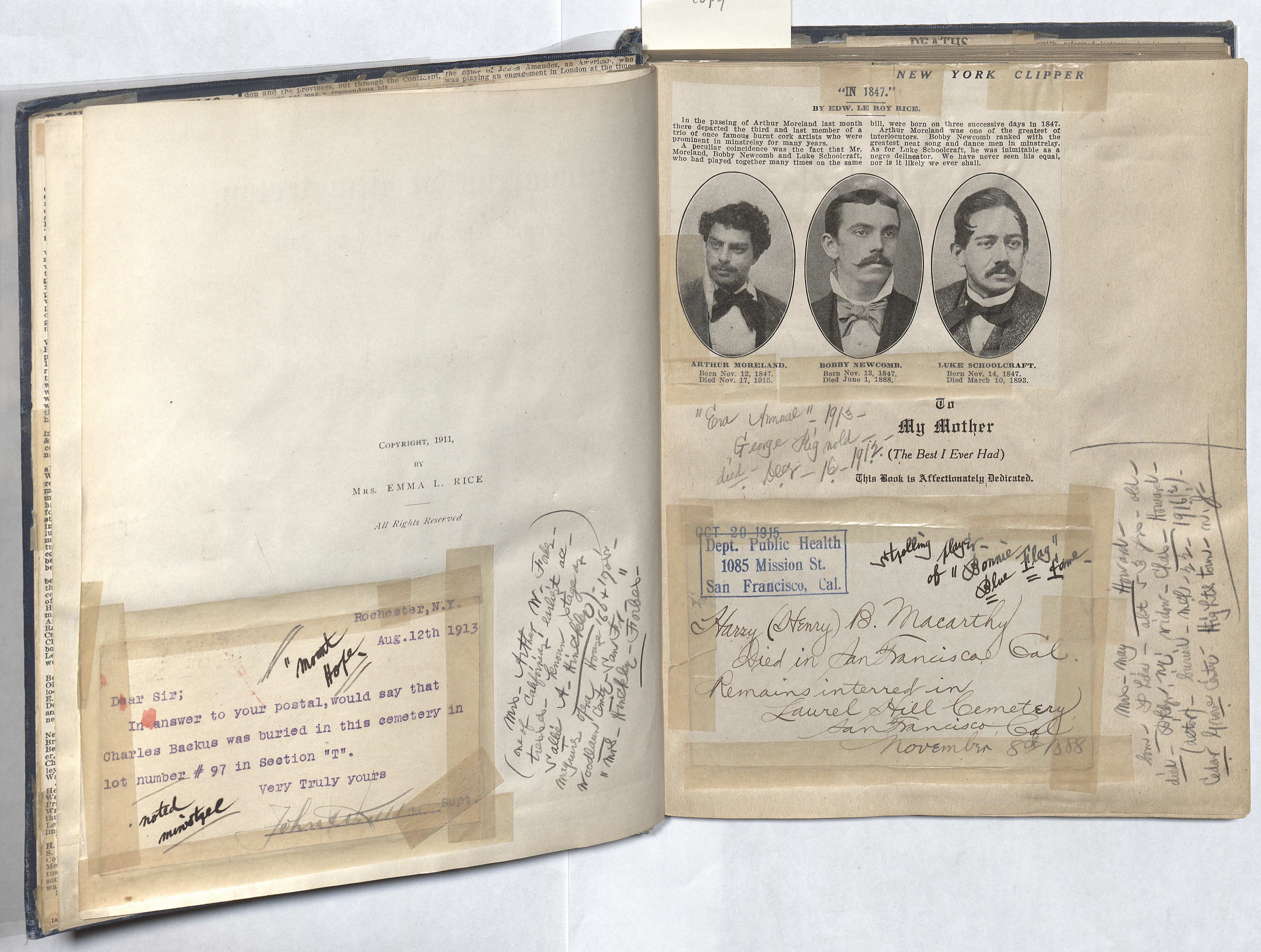 Correspondence regarding the burial of Harry B. McCarthy may be found pasted into the front matter of Monarchs of Minstrelsy. (PN2071 .B58 R52 1911, Copy 2, Gift of Mr. and Mrs. Douglas M. Valentine. Image by Molly Schwartzburg.)

The scrapbooked clippings and penciled annotations provided many minute details that will enrich my dissertation research, and as a whole the two books pushed me to speculate about how history is made. The book’s owner did not just passively read these accounts but engaged in fact-checking and revision, creating a personalized historical record. The marked up copies of Monarchs of Minstrelsy preserve a snapshot of a messy, contested history in progress. Plus, these scrapbooked copies reminded me of the importance of consulting physical texts in addition to electronic resources. Yes, a digitized copy allowed me to prime my research from home, but the Small Special Collections Library’s two idiosyncratic copies offered unique information, while also illuminating how just one reader repurposed a book according to his or her own objective. 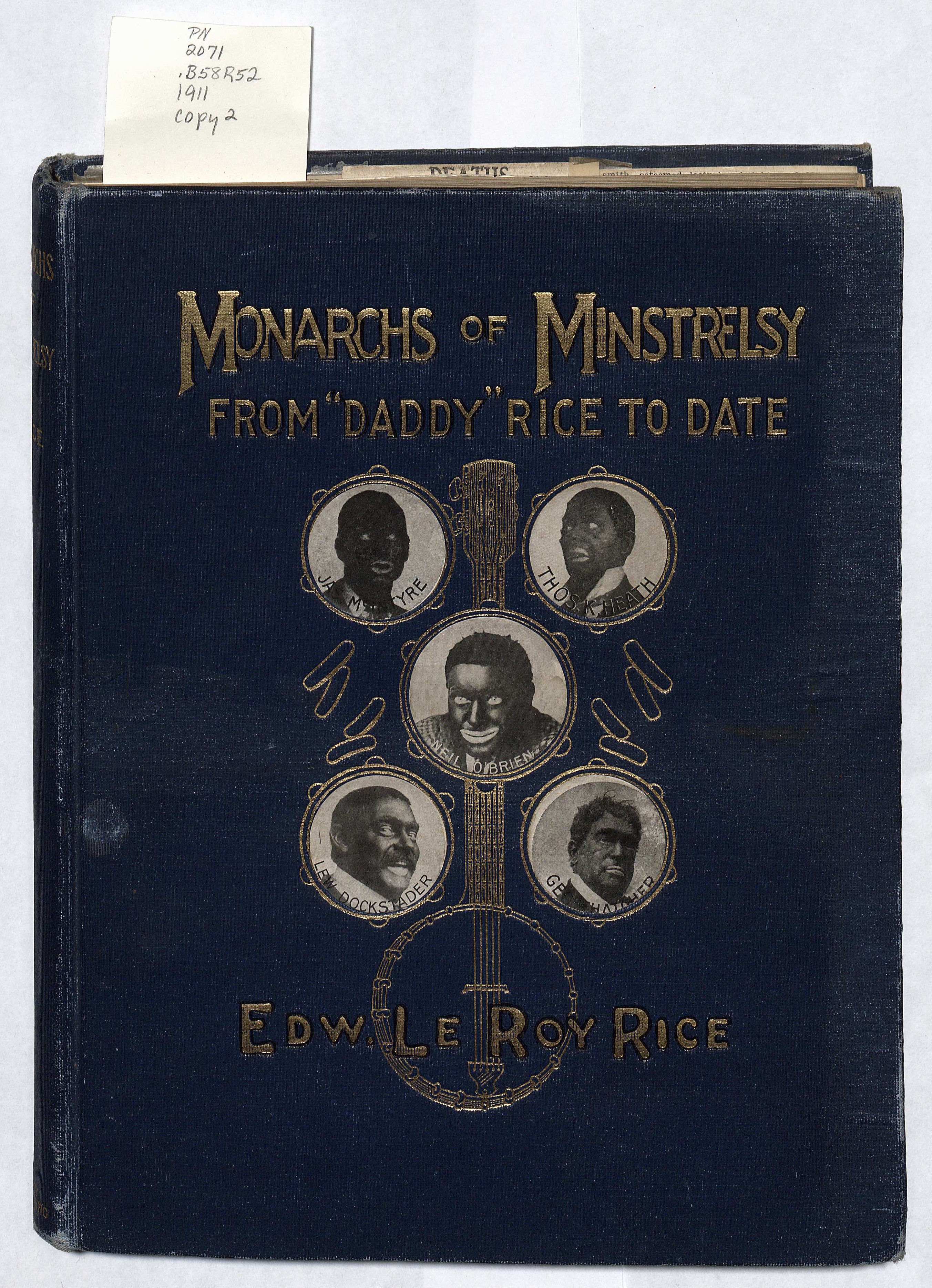 The cover of one of the two heavily annotated copies of Monarchs of Minstrelsy in Special Collections. (Image by Molly Schwartzburg.)