Every third week of March, hundreds of authors and bibliophiles sojourn in Charlottesville, immersing themselves in book culture at the Virginia Festival of the Book.  The Special Collections Library was well represented in this year’s festival.  Both of our curators (and fellow bloggers) Molly Schwartzburg and David Whitesell, as well as Honorary Curator and Director of the Rare Book School Michael Suarez, gave talks on a wide array of subjects, including the history of an abolitionist print, seventeenth- and eighteenth-century Spanish dramas, miniature and artist books, and e-books.  U.Va. alum and former Special Collections student employee Lex Hrabe also made three appearances at the festival, sharing with area school students the inner workings of his young adult thriller, Quarantine: The Loners.

The Print That Changed the World: The Description of the Slave-Ship Brookes

The Rare Book School hosted this lecture by U.Va. Professor and Honorary Curator Michael Suarez, S.J., which described the circulation and history of the famous, or should we say, infamous, original diagram depicting enslaved Africans in the stowage of the British slave-ship Brookes. Special Collections’ copies of the print from 1791 and 1808 were on display. 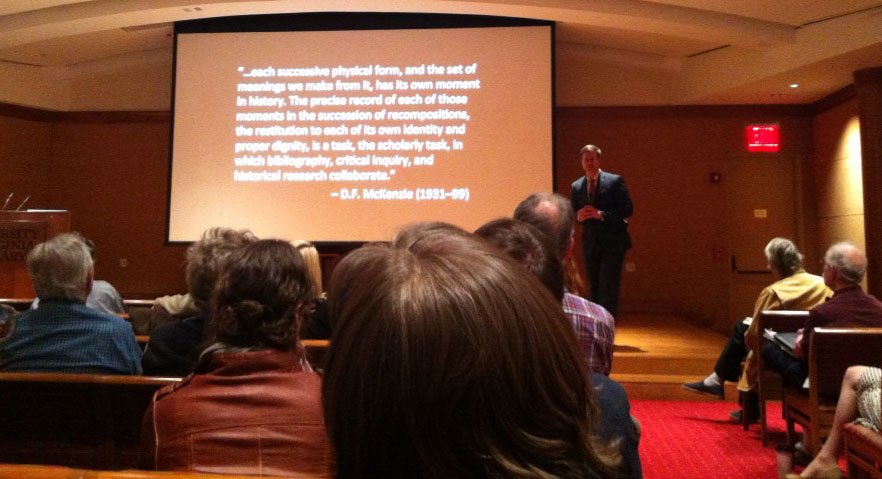 Michael Suarez gives his talk on the publication history of the printing of the stowage of the slave ship Brookes to a packed audience in the Harrison-Small Auditorium, 21 March 2013. (Photograph by Nicole Bouche) 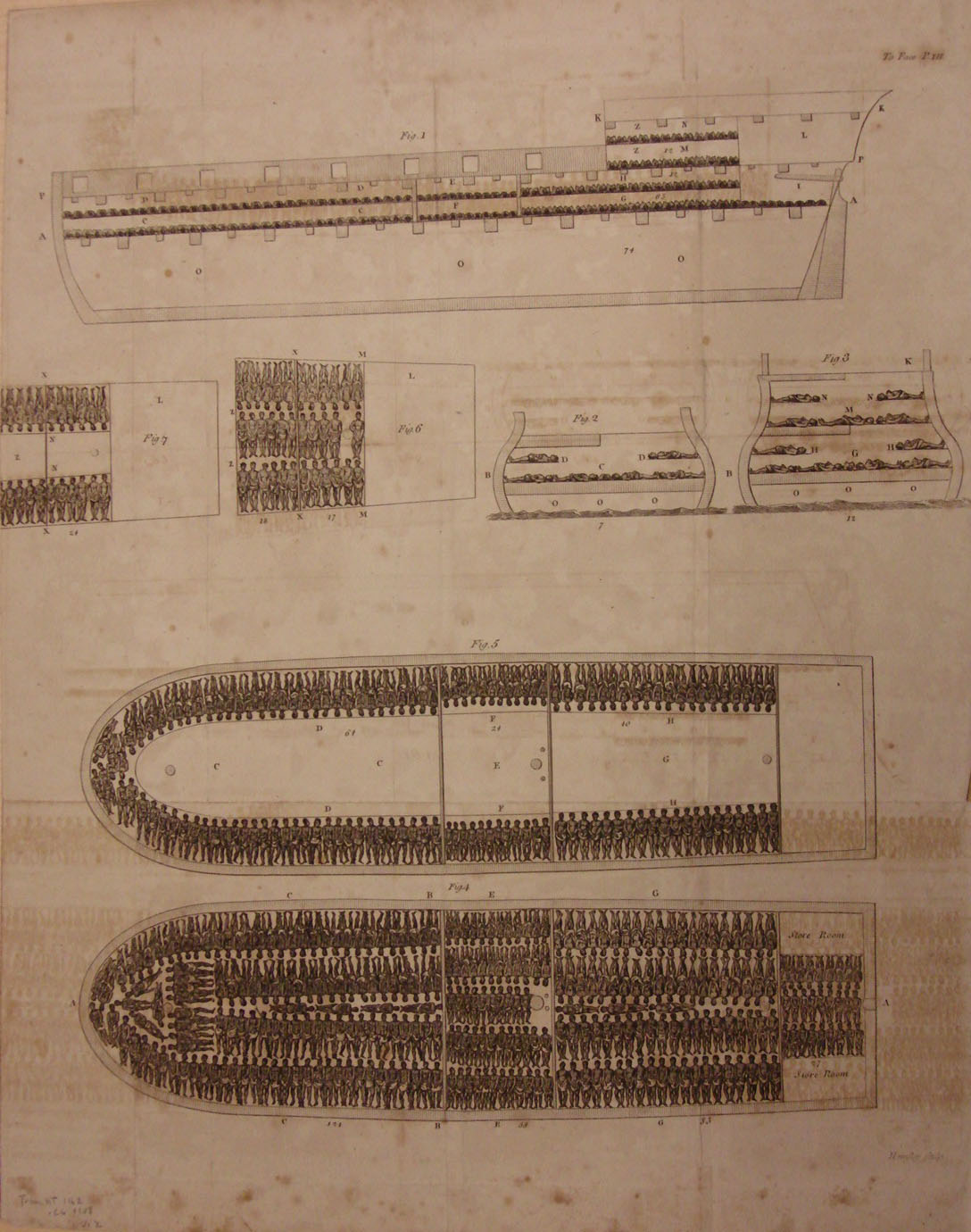 Special Collections has three plates of the “Stowage of the British Slave Ship Brookes.” Featured is our 1808 print, originally from volume two of Thomas Clarkson’s The History of the Rise, Progress, and Accomplishment of the Abolition of the Slave-trade by the British Parliament (HT1162 .C6 1808 v.2. Photograph by Petrina Jackson) 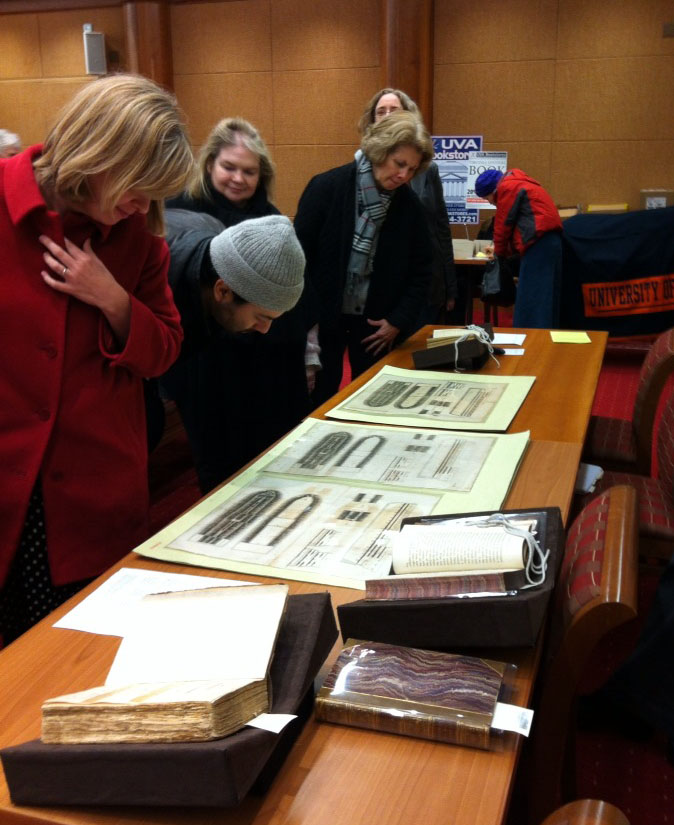 Audience members view Special Collections’ “Stowage of the British Slave Ship Brookes” prints and the books from where they originated. (Photograph by Nicole Bouché)

David Whitesell’s lecture, which was hosted by the Bibliographical Society of the University of Virginia, focused on the bibliography of seventeenth- and eighteenth-century Spanish drama.  He provided an introduction to Spanish Golden Age drama, explained some key challenges of the genre’s bibliographers, described how proponents of the New Bibliography have addressed these challenges, and closed with a case study of how the methods of analytical bibliography might advance the understanding of Spanish Golden Age drama and its reception. 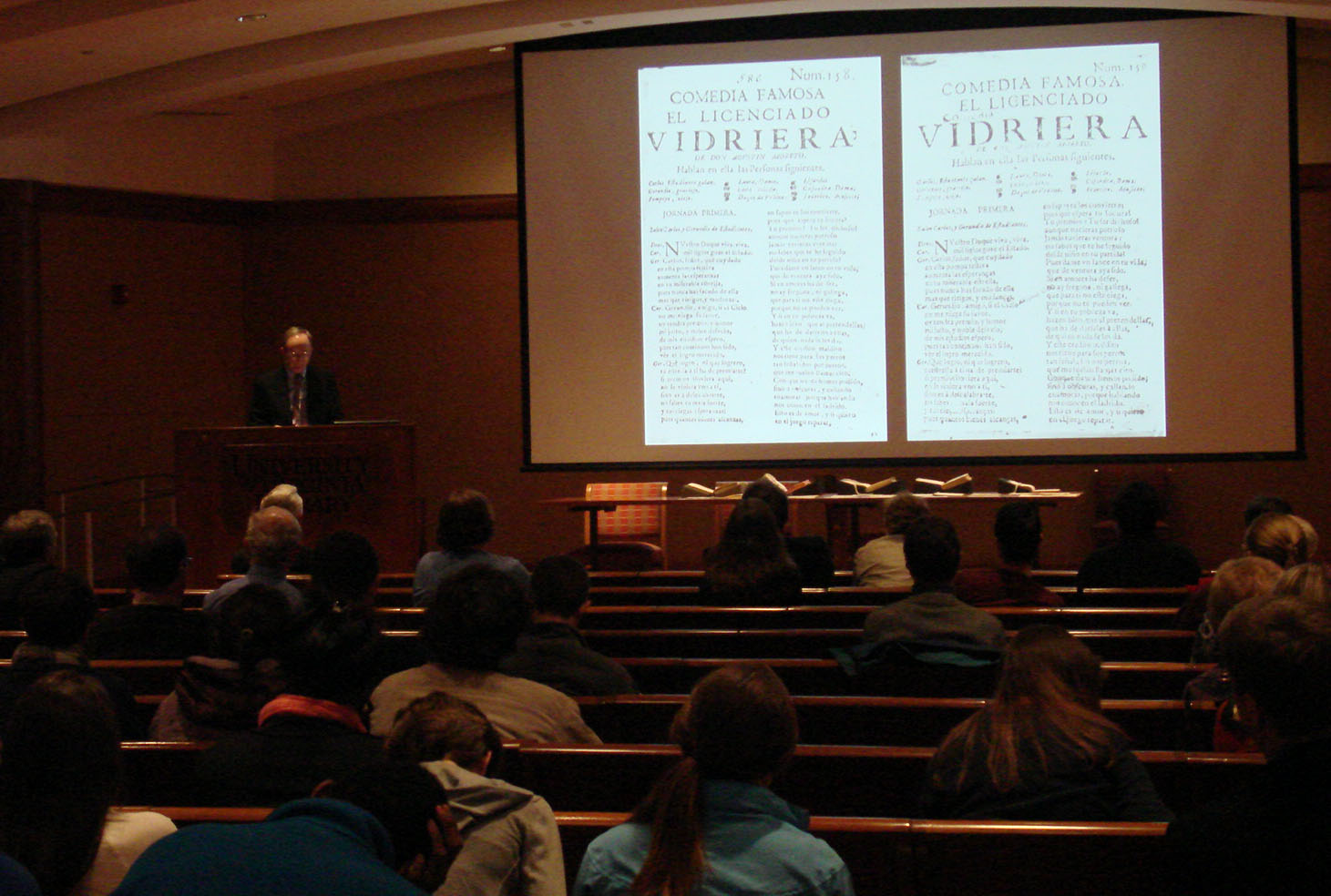 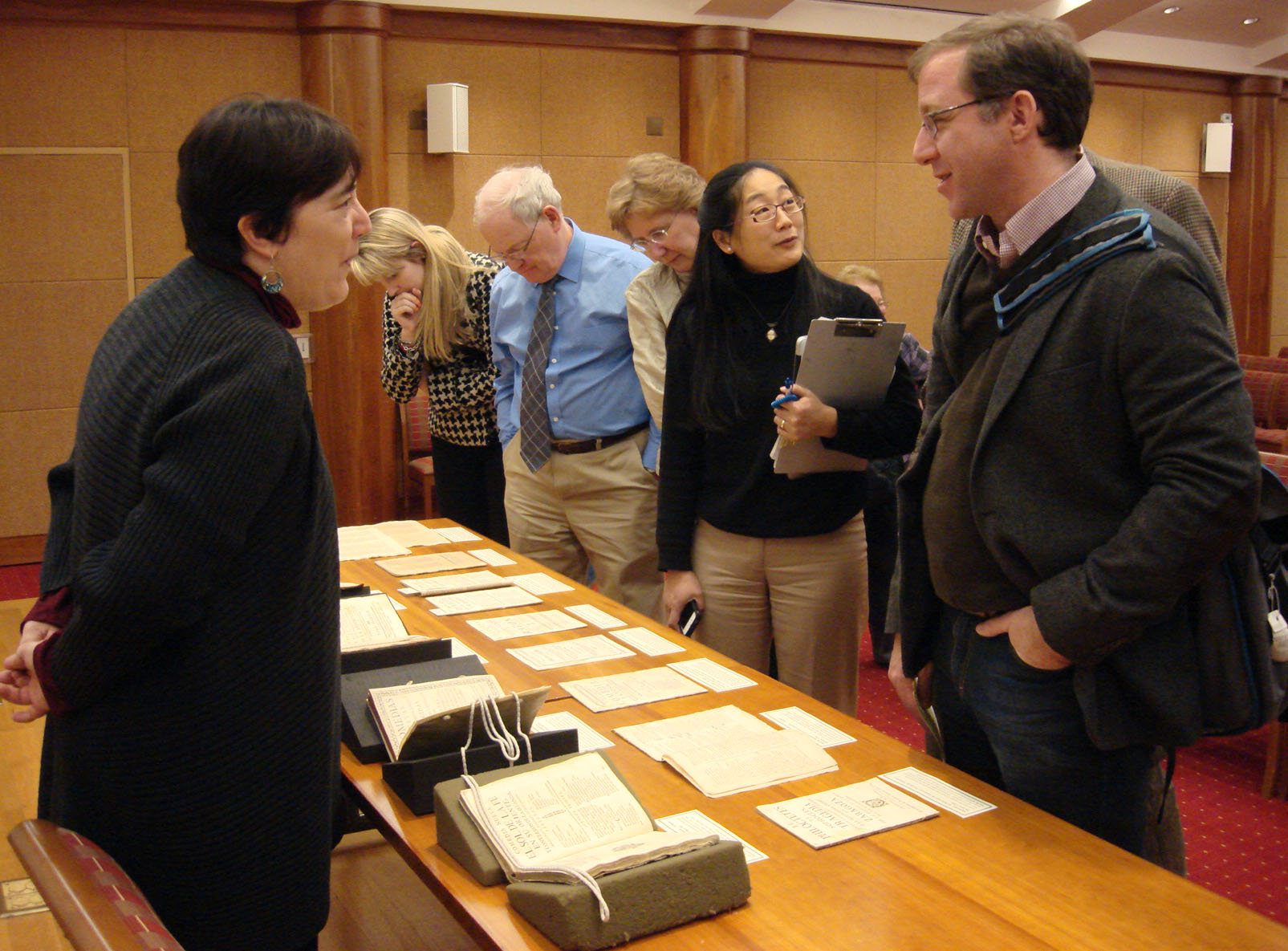 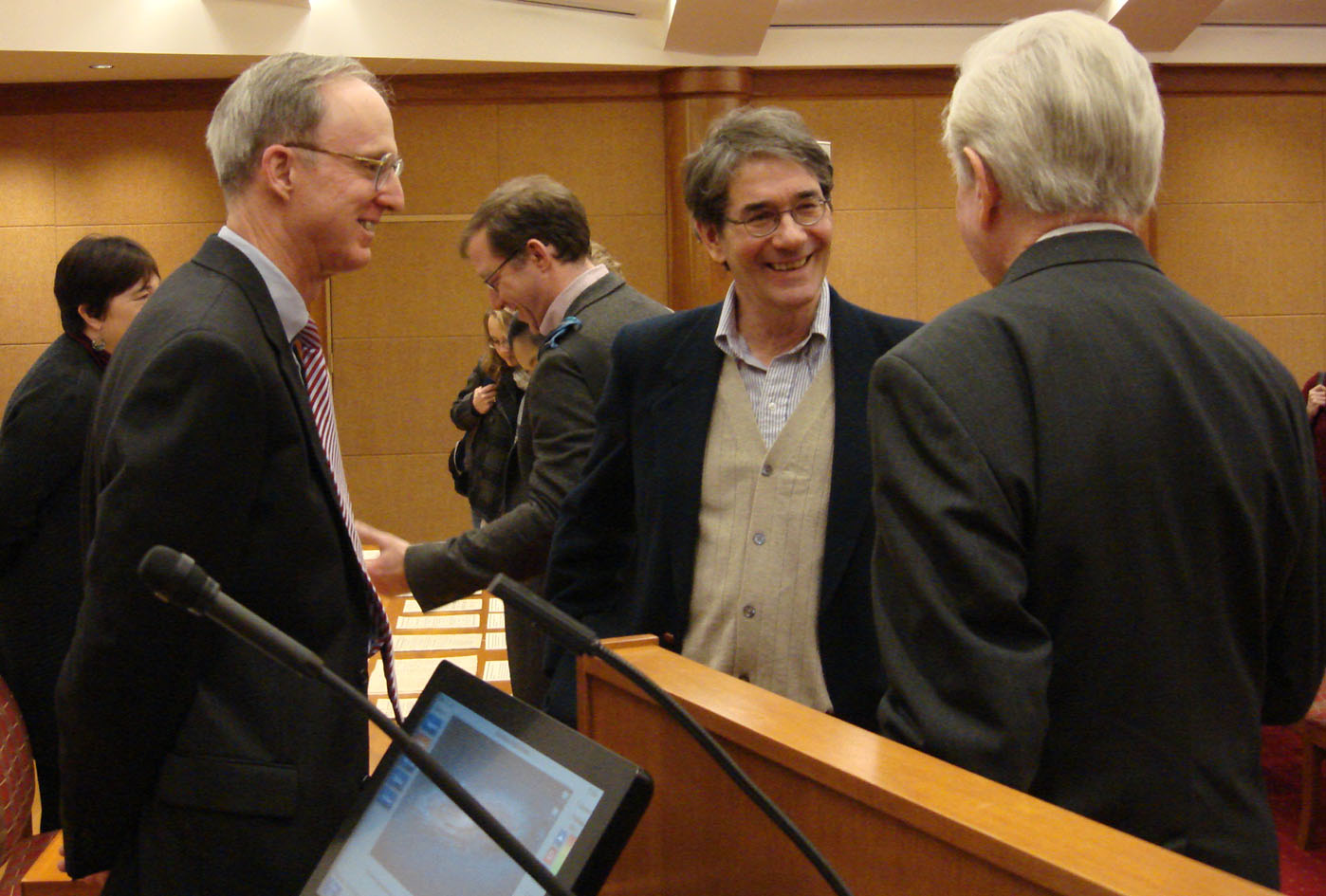 The Codex is Not the Only Book: the iPad, the Poet, and the Artist and Monumental Ideas in Miniature Books

Molly performed at two Virginia Festival of the Book events on the same day: first as a panelist and second as an exhibition guide.

The panel, “The Codex is Not the Only Book,” featured Virginia poet Mary-Sherman Willis, Charlottesville publisher Katherine McNamara, and Molly. The three discussed the 2012 ebook of Willis’s poem Caveboy, illustrated by Collin Willis and designed and published by McNamara at Artist’s Proof Editions. It was published around the same time as a limited-edition print book, which contains the same text but a radically different overall design; this volume was designed and produced by Collin Willis for Artist’s Proof.

As a panelist, Molly discussed her long-standing interest in how readers perceive e-books and how special collections libraries should begin thinking about preserving examples for the long term—a project that the field is just beginning to consider. She spoke about the ways that reading an ebook like Caveboy raises questions in the reader about the lines between the roles of the writer, publisher, and the software platform—in this case, Apple’s iAuthor. And she described some of the questions special collections librarians are asking themselves about creating a historical record of the digital revolution in book production—could a library actually acquire an ebook, rather than simply purchase access to a file? If so, where would that ebook end, and the interface begin? How will researchers look back at the early ebook phenomenon in twenty, fifty, or five hundred years?

Hosted by the member artists of Virginia Arts of the Book Center, Molly gave an engaging exhibition talk on Monumental Ideas in Miniature Books, a travelling exhibition that features 87 miniature books by artists from eight countries.  In her talk, she discussed the artistry of books and the relationships between miniature books, altered books, and artists’ books. 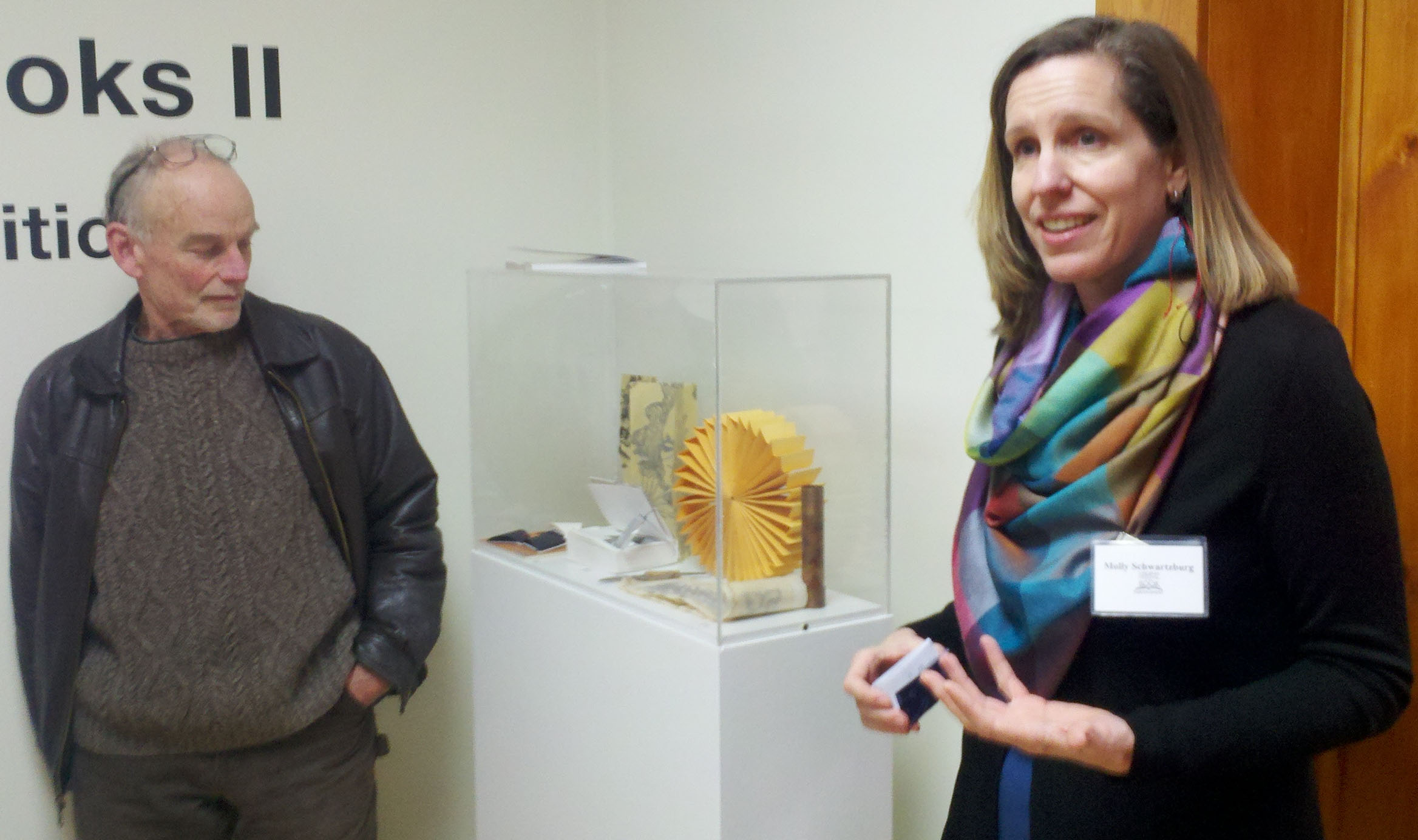 Molly Schwartzburg discusses Envelope Journal No. 3 by Jesse Alan Brown with exhibition viewers. Brown’s work is made of No. 3 coin envelopes, magnetic clasps, and PVA adhesive. (Photograph by Petrina Jackson) 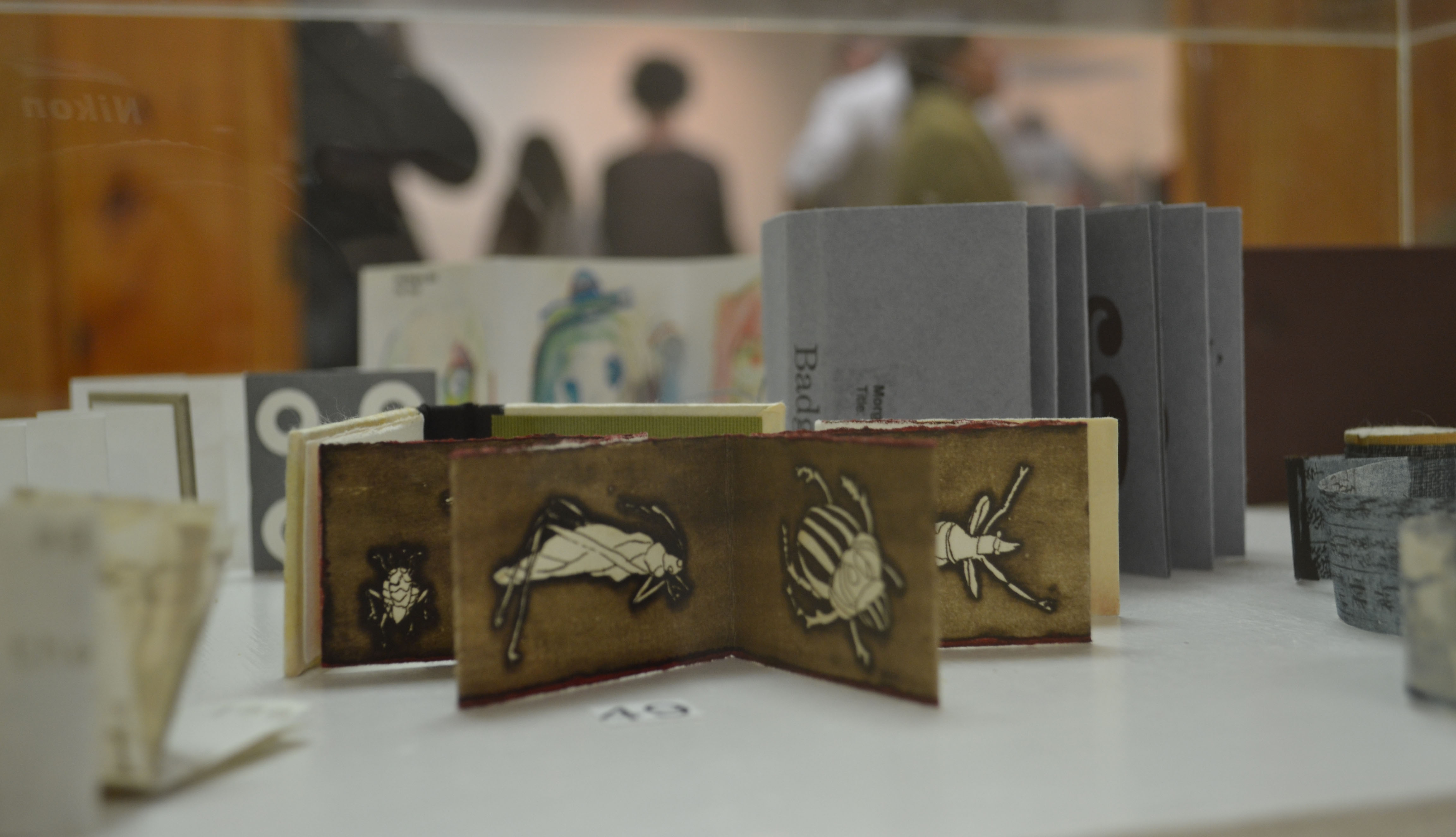 Insects by Sarojini Jha Johnson is featured in the foreground of the case. (Photograph by Tessa Currie) 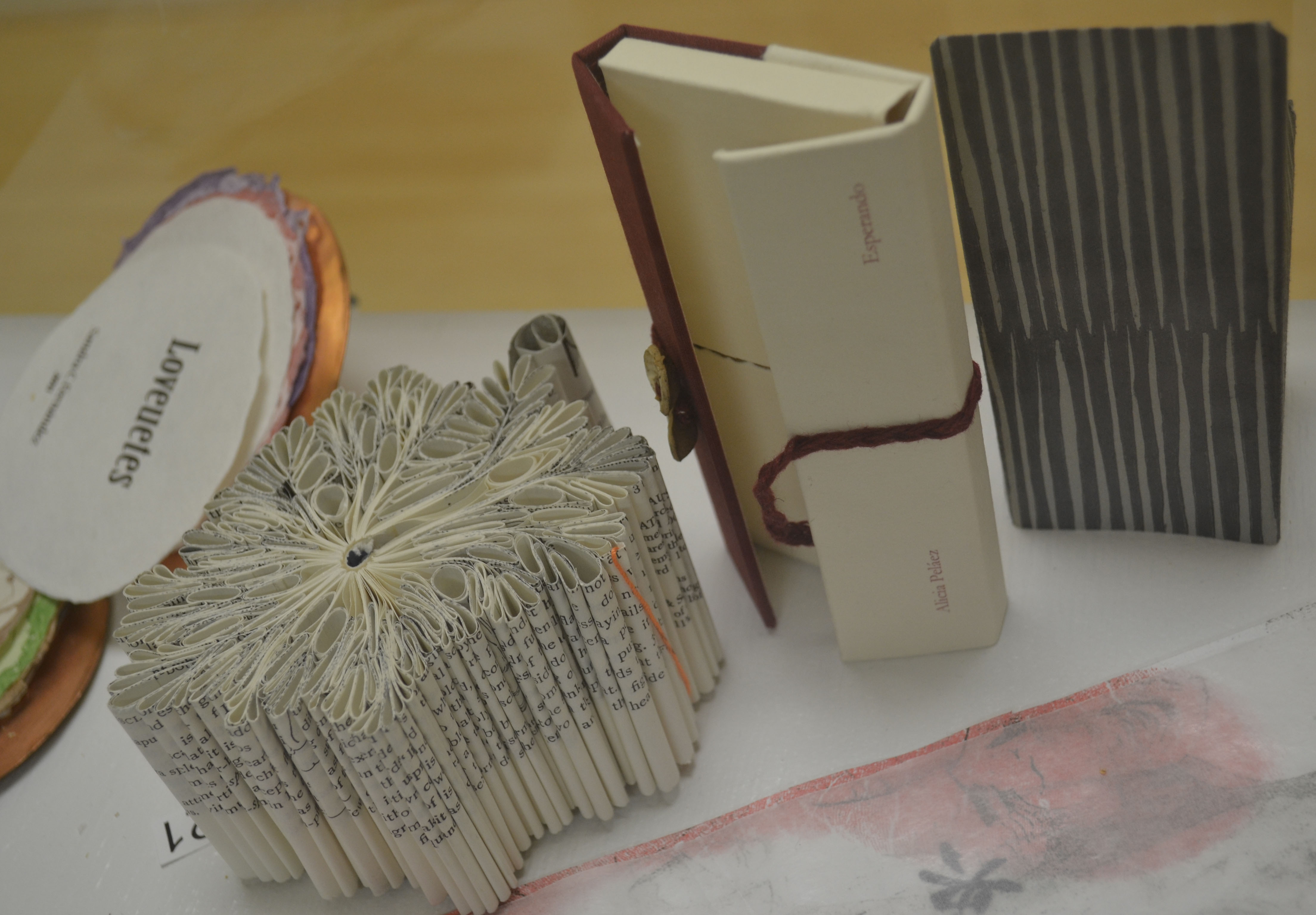 U.Va. graduate (Class of 1999), former Special Collections student employee, and author Lex Hrabe was a panelist for the Saturday session at the book festival. During the week, he had given talks to two schools, including his alma mater St. Anne’s-Belfield (Class of 1995), and was a panelist for Unlikely Heroes in Youth Adult Books.  Lex is one half of Lex Thomas, the pen name for the writing team of Lex Hrabe and Thomas Voorhies.  The duo wrote the young adult thriller Quarantine: The Loners, which was the subject of his talks.  Lex’s proud mother Margaret Hrabe is the reference coordinator for the Albert and Shirley Small Special Collections Library! 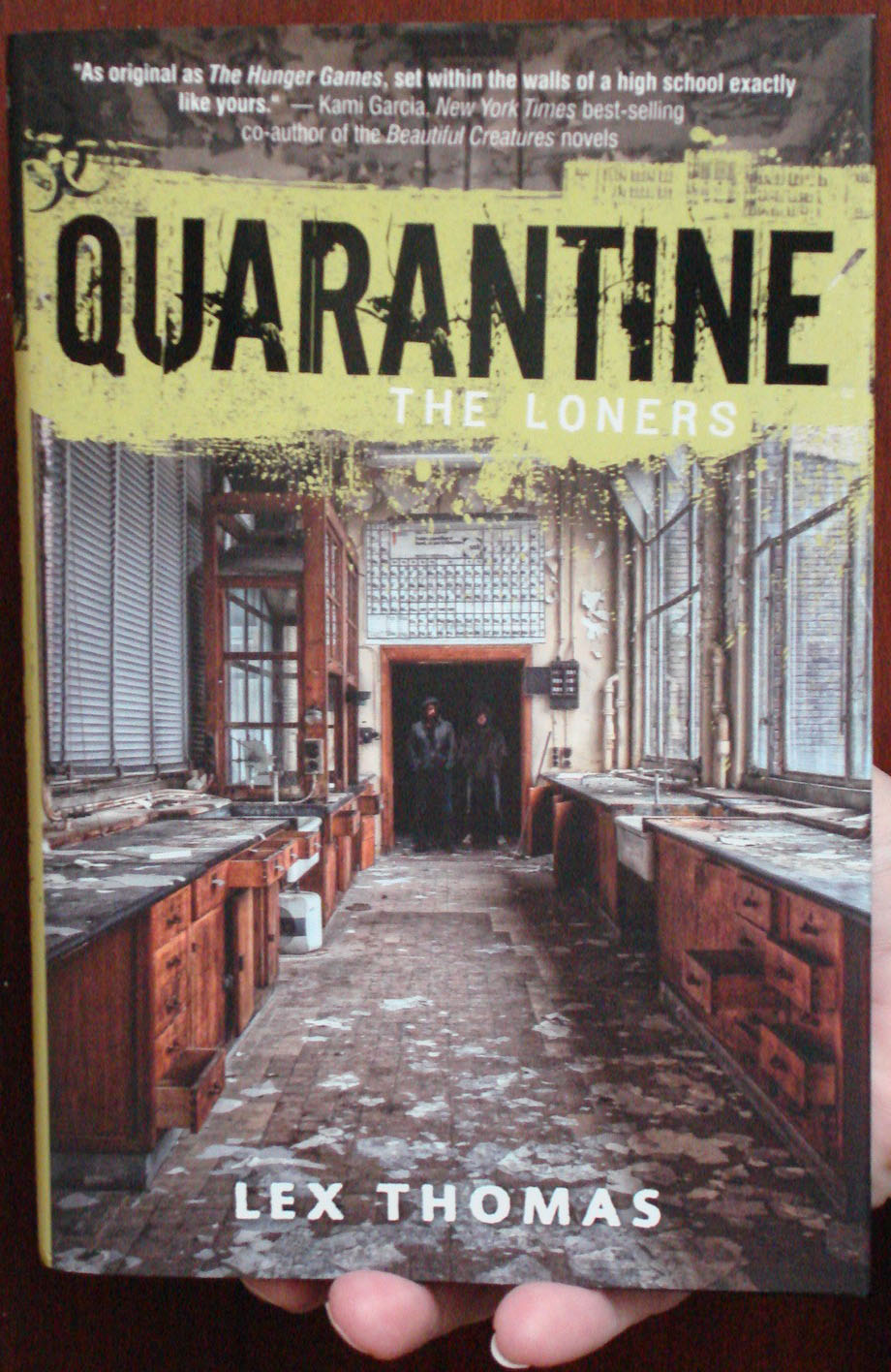 The YA novel Quarantine: the Loners is first in a trilogy, and was published in July 2012;  book two Quarantine: the Saints will be in bookstores on July 9th of this year. (PZ7 .T366998 Qud 2012. Photograph by Petrina Jackson) 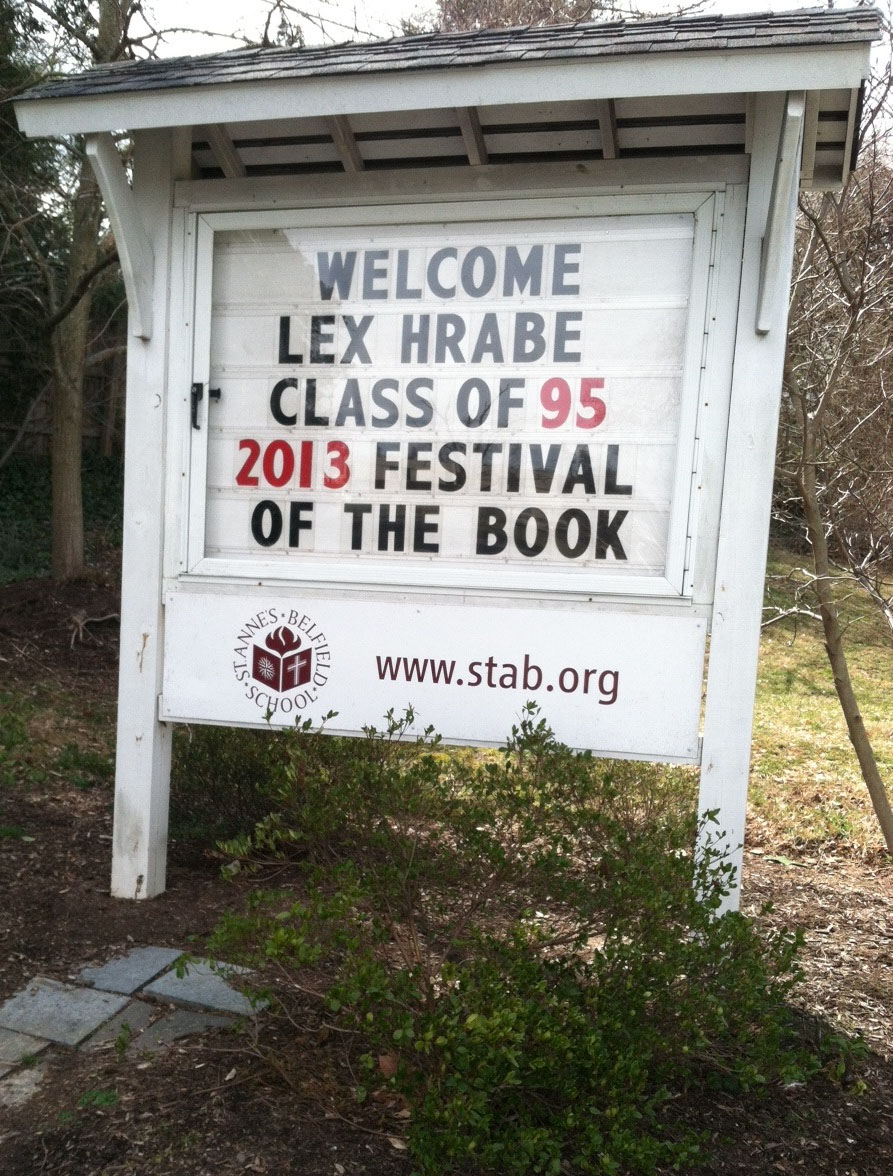 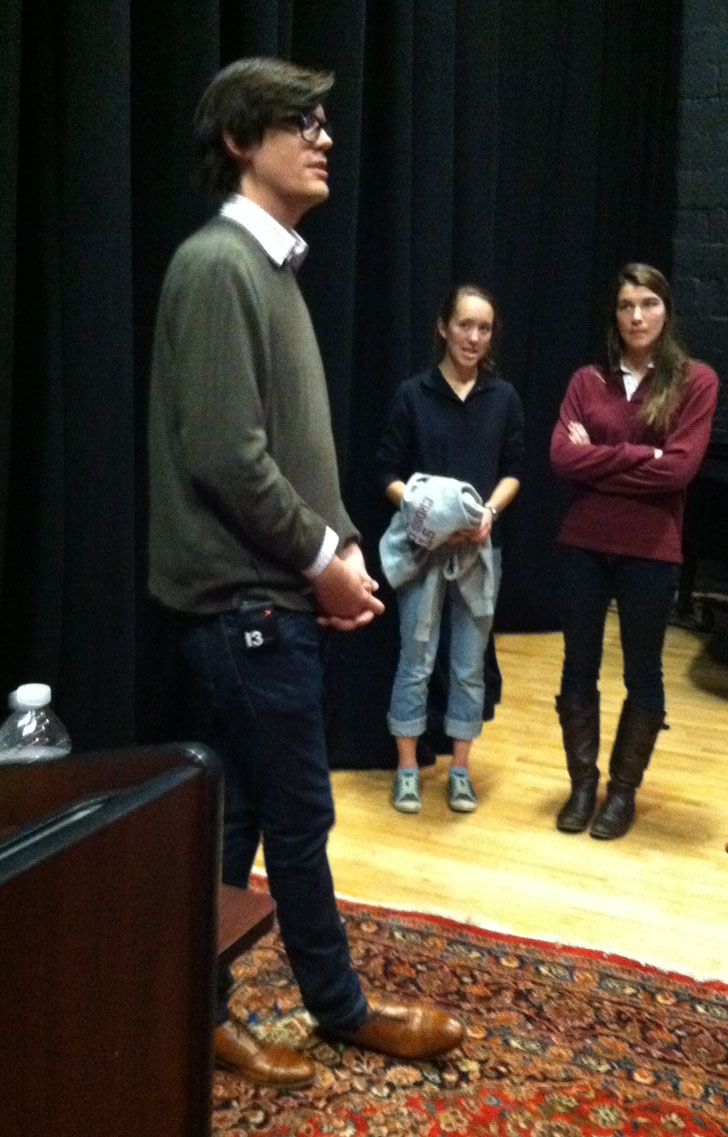 We hope you all get to join us next year at the Virginia Festival of the Book.  Be sure to check out Special Collections’ involvement!

2 thoughts on “Virginia Festival of the Book 2013: Special Collections Edition”