Each April, we celebrate Historic Garden Week in Virginia. Next week—April 23-30, 2022—private landscapes, public gardens, and historic sites across Virginia will offer tours showcasing our beautiful state at the peak of spring.

In this post by Manuscripts and Archives Processor Ellen Welch, you’ll enjoy just a sampling of images from our collection, Herbarium Pictum (MSS 38-618) which contains five volumes of illustrated watercolors of flowers, plants, fungi, and trees painted by Erdmann Christianus Seyffert, 1743-1757. Special thanks to Heather Moore Riser for suggesting this collection and Whitney Buccicone for the blog idea.

The illustrations are numbered and labeled with their scientific (Latin and Greek) names. The end of volume five includes an index with the names and classifications from Carl Linneaeus (1707-1778), a Swedish botanist, zoologist, taxonomist, and physician who formalized binomial nomenclature, the modern system of naming organisms. The first part of the name, the generic name, identifies the genus to which the species belongs, and the second part is the specific name of the species. The first letter of the generic name is capitalized, and the species is in lowercase. Both names are italicized. The descriptions of the plants have been added to this blog for further identification but are not part of the collection. These watercolor illustrations painted so long ago are beautifully detailed and it is our privilege to share them with you. 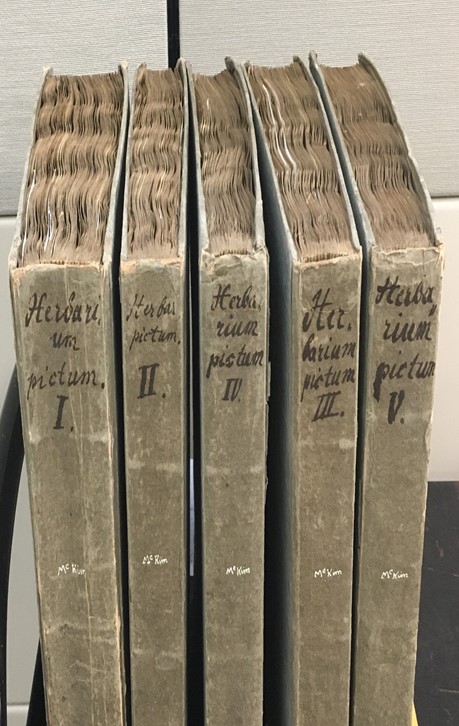 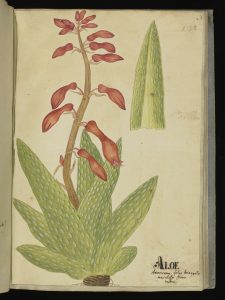 Aloe, also written Aloë, is a genus (Asphodelacea) containing over 560 species of flowering succulent plants. The most widely known species is Aloe vera, or “true aloe” which is known for healing wounds and treating skin problems.  It is native to tropical and southern Africa, Madagascar, Jordan, and the Arabian Peninsula, as well as various islands in the Indian Ocean. 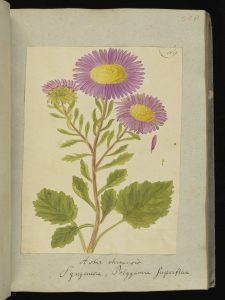 According to one version in Greek mythology, the aster was created by the tears of the Greek goddess, Astraea, at seeing violence on earth. She became upset and asked to be turned into a star. From the heavens, she saw what happened to earth and wept. Her tears fell to the ground and turned into star-shaped flowers. For this reason, asters were named after her. Asters provide habitat and late-season food for pollinators. 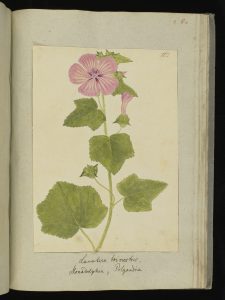 Lavatera, a native flower of Spain and Syria, is in the family Malvaceae and is a cousin of hibiscus and hollyhock. It was named after 17th century Swiss botanist, J. R. Lavatera. It was referred to as Spanish Summer Mallow. 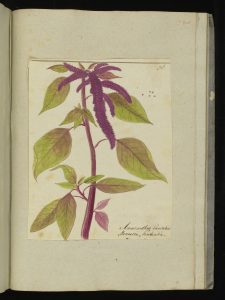 Also called Love-lies-bleeding, Tassell flower, and Velvet flower. Many parts of the plant, including the leaves and seeds, are edible, and are used as a source of food in India and South America. In the Victorian language of flowers, Love-lies-bleeding means hopeless love. 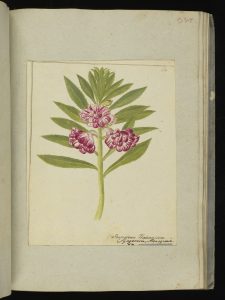 Known also as Balsam, Garden balsam, Rose balsam, Touch-me-not or Spotted snapweed, Impatiens is a species of plant native to India and Myanmar. Juice from the leaves is used to treat warts, snakebites, rheumatism, fractures, and other ailments. 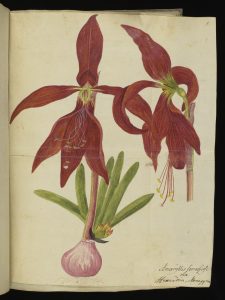 First known in Europe in 1593, Amaryllis are from South America according to Swedish botanist, Carl Linnaeus (1707-1778). 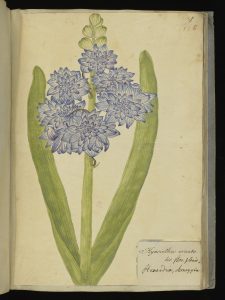 Hyacinthus are native to Turkey, Syria, Lebanon and Israel. In the 16th century they became very popular and were imported to many European countries. The first known mention of Hyacinth is in Homer’s Iliad which dates to approximately 762 BCE. 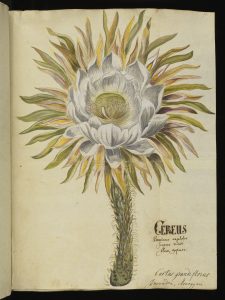 Grandiflorus means “large flowered”in Latin. Carl Linnaeus described this cactus in 1753 as the largest flowered species of cacti known. It is also called Queen of the Night. 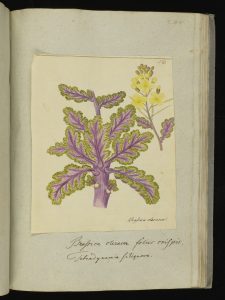 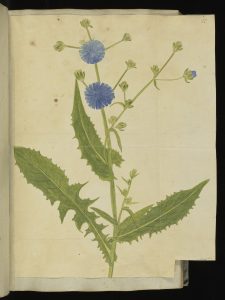 Known as chicory, it is a woody, perennial herbaceous plant of the daisy family Asteraceae, featuring bright blue flowers. It can be used as a coffee substitute and food additive. 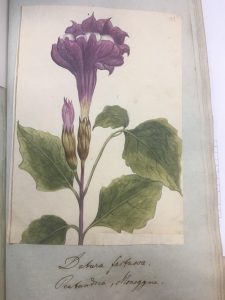 Datura is a poisonous, vespertine-flowering plant belonging to the family Solanacea.  Also called thornapples, jimsonweeds, devil trumpets, moonflower, devil’s weed, and hell’s bells, they have psychoactive properties, and can cause arrhythmias, fever, hallucinations, psychoses, and even death if taken internally. It has been associated with witchcraft in the western world. 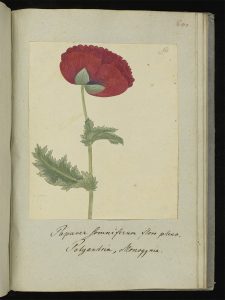 Papaver somniferum, commonly known as the opium poppy or breadseed poppy. It probably originated in the eastern Mediterranean region but is now naturalized across much of Europe and Asia. 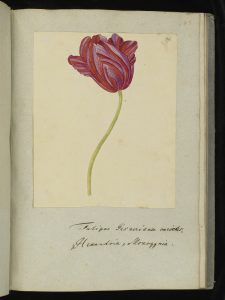 Tulipa gesneriana, also known as the Didier’s tulip or Garden tulip, is a species of plant in the lily family. It is believed to have originated in Turkey although tulips are the national flower of Holland. 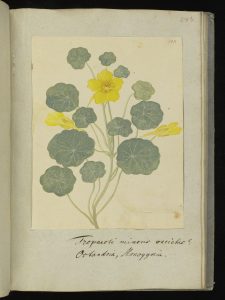 A species of flowering plant in the family Tropaeolacea, originating in the Andes from Bolivia north to Colombia. The current genus name Tropaeolum, coined by Carl Linnaeus, meaning “little trophy”(in Latin), and borrowed from Ancient Greek “trophy.” 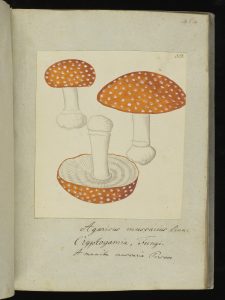 Bright red fly agaric mushroom, also known as Amanita muscaria, from northern Europe and Asia.  It can contain the psychoactive chemical compound muscarine. “No mushroom has gathered unto it more folklore and mythology than this white-spotted fairytale fungus. It may well be that Lewis Carrol had experienced the hallucinatory effects of Amanita muscaria. In Alice’s Adventures in Wonderland, Alice eats part of one side of a mushroom and grows shorter; a piece from the other side would make her taller.” Agaricus is a remedy for twitches, jerks, tics, cramps, and convulsions. 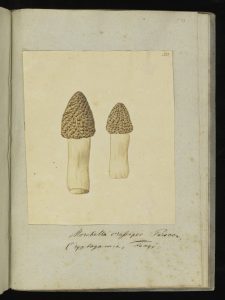 A morel with a conic fertile portion having deep and irregular pits. The generic name Morchella is said to come from “morchel,” an old German word meaning “mushroom.” Morels are edible mushrooms appreciated worldwide for their savory flavor. They have also been used in medicines for centuries. 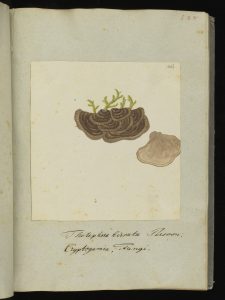 Fruit bodies of this mushroom are leathery, usually brownish at maturity, and range in shape from coral-like tufts to having distinct caps. Almost all species in the genus are thought to be inedible. 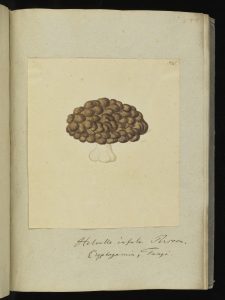 Helvella is an ascomycete fungus from the genus Gyromitra which is widely distributed across Europe and North America. It normally fruits in sandy soils under coniferous trees in spring and early summer. The mushroom is an irregular brain-shaped cap that is dark brown in color. It can be poisonous, if eaten raw or not cooked properly. 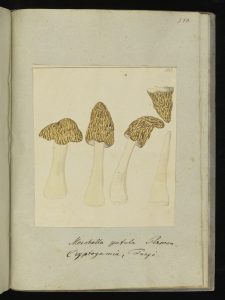 Morchella is a type of morel. Morels are a feature of many cuisines. Their unique flavor is prized by chefs worldwide. They have many species names which have been disputed for over a century. 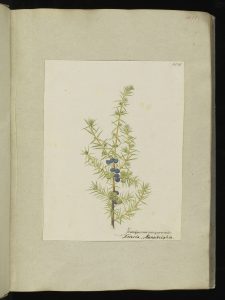 The common juniper is a species of small tree or shrub in the cypress (Cupressaceae) family. This evergreen conifer has the largest geographical range of any woody plant. The cones are used to flavor certain beers and gin. The word “gin” derives from an Old French word meaning “juniper.” The berries are also used in the ales of Norway, Sweden, Finland, Estonia, and Latvia. They have been used as medicine by many cultures including the Navajo people.