We mark Juneteenth 2021 with this guest post from Daniel Bachman, Madison County artist and independent scholar interested in the folk histories of the Virginia experience. 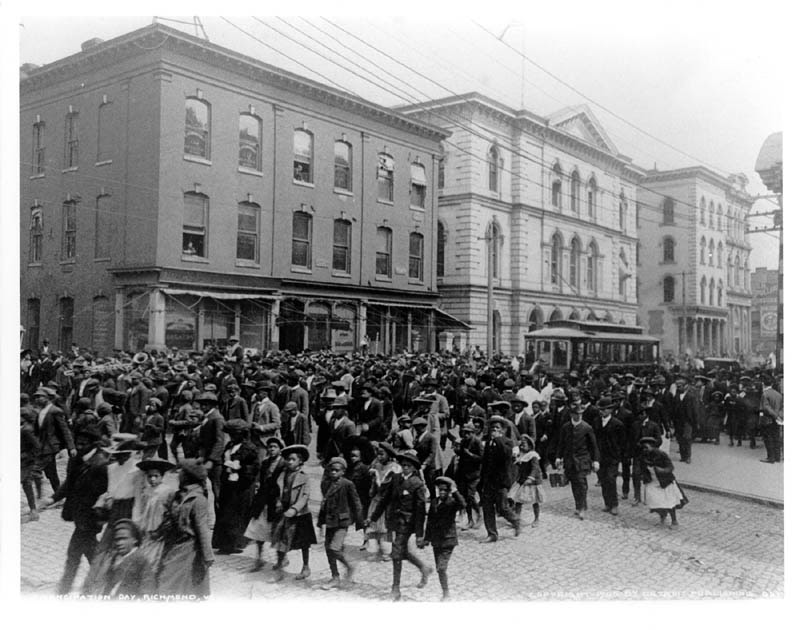 Although we now celebrate Juneteenth as Emancipation Day, historically, black Virginians honored April 3 & 9. Local historian Bessida Cauthorne White writes, “April 3, 1865, was the day that the City of Richmond fell to the Union Army, a military operation brought about largely through the efforts of African-American troops. April 9 was Emancipation Day in Lynchburg and in King William County, marking Robert E. Lee’s surrender at Appomattox on April 9, 1865.” In 1866, Richmond designated April 3 as Emancipation Day, which remained a major holiday for black Virginians in the city until they were suppressed during the Jim Crow era.

Tappahannock, however, held a large annual Third of April celebration through the mid-1950s. White writes, “A typical Third of April began with a parade through the streets of Tappahannock…Following the parade and a lunch break, the festivities resumed with a formal program in the Essex County Courthouse. There was always an inspirational featured speaker…Some of the older residents remember that a play was given on the evening of the Third of April during the early part of the twentieth century.” Local residents recalled that the annual celebration in Tappahannock was “our day, the one time that we took over the town.'”

“The fact that Black folk were able to keep the celebration going through the rise of Jim Crow, through the Great Depression, and through two world wars says much for the tenacity and perseverance of the African-American citizens of the area, and should not go unnoticed. It is ironic that a celebration that marked the fall of the City of Richmond was sustained in Tappahannock, but not in Richmond.”

One thought on “Juneteenth in Virginia: Keeping the Celebration Going”