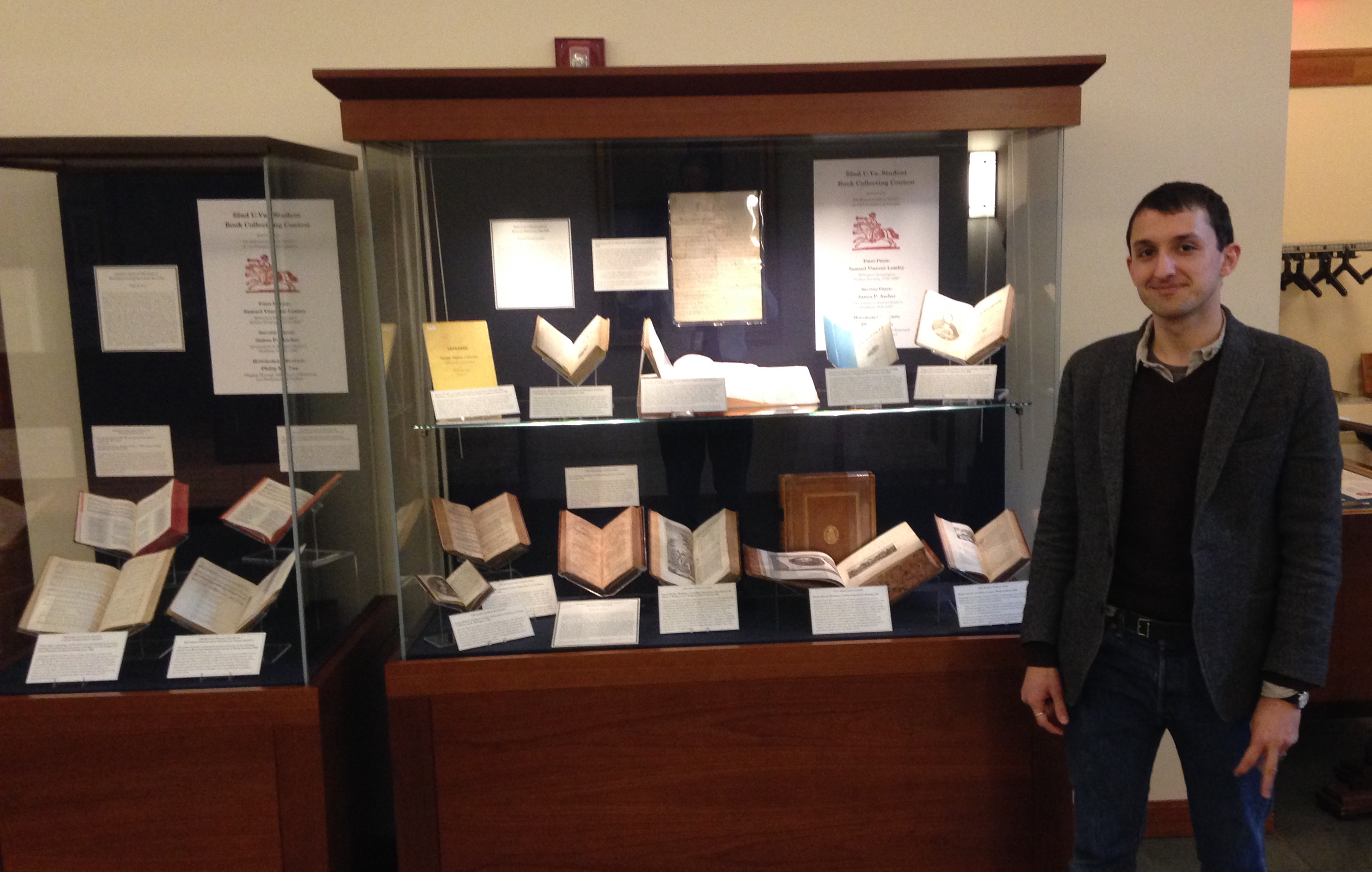 Winners of the 52nd U.Va. Student Book Collecting Contest were announced at the Bibliographical Society of the University of Virginia’s annual meeting on Friday, March 23, 2018 in the Auditorium of the Albert and Shirley Small Special Collections Library. The competition, sponsored by the Bibliographical Society, is a tradition dating back to 1948. It offers all U.Va. students a chance to showcase their personal book collections, and to win substantial cash prizes as well. Highlights from the winners’ collections were exhibited in our first floor exhibition gallery. 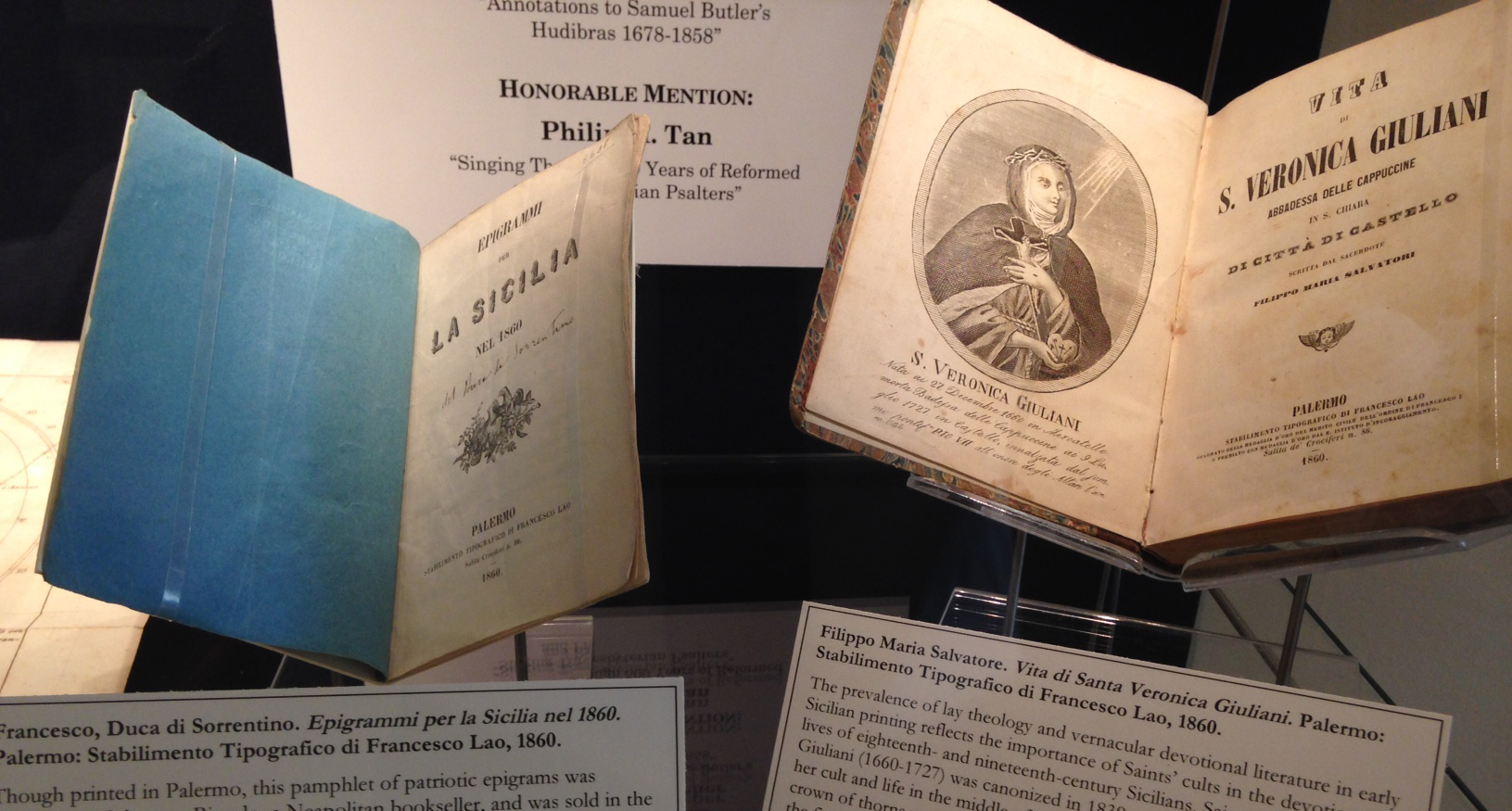 First prize was awarded to Samuel V. Lemley, a Ph.D candidate in the Dept.of English, for “Biblioteca Genealogica: Sicilian Printing, 1704-1893.”  Lemley’s collection “offers a representative sample of Sicilian printing and ephemera from the 18th and 19th centuries, a period in which my maternal ancestors lived in the Sicilian provinces of Palermo and Agrigento. The chronological limits, 1704 to 1893, reflect the years for which genealogical records (births, baptisms, and deaths) for the Militello and Marchese families survive: Gabriele Militello, my earliest documented ancestor, was born in Bivona in 1704; my great-grandfather, Pietro Marchese, was born in Pollina in 1893. These are the genetic bookends of my Sicilian family tree and the figurative bookends of this collection.” Lemley will represent U.Va. in this year’s National Collegiate Book Collecting Contest. 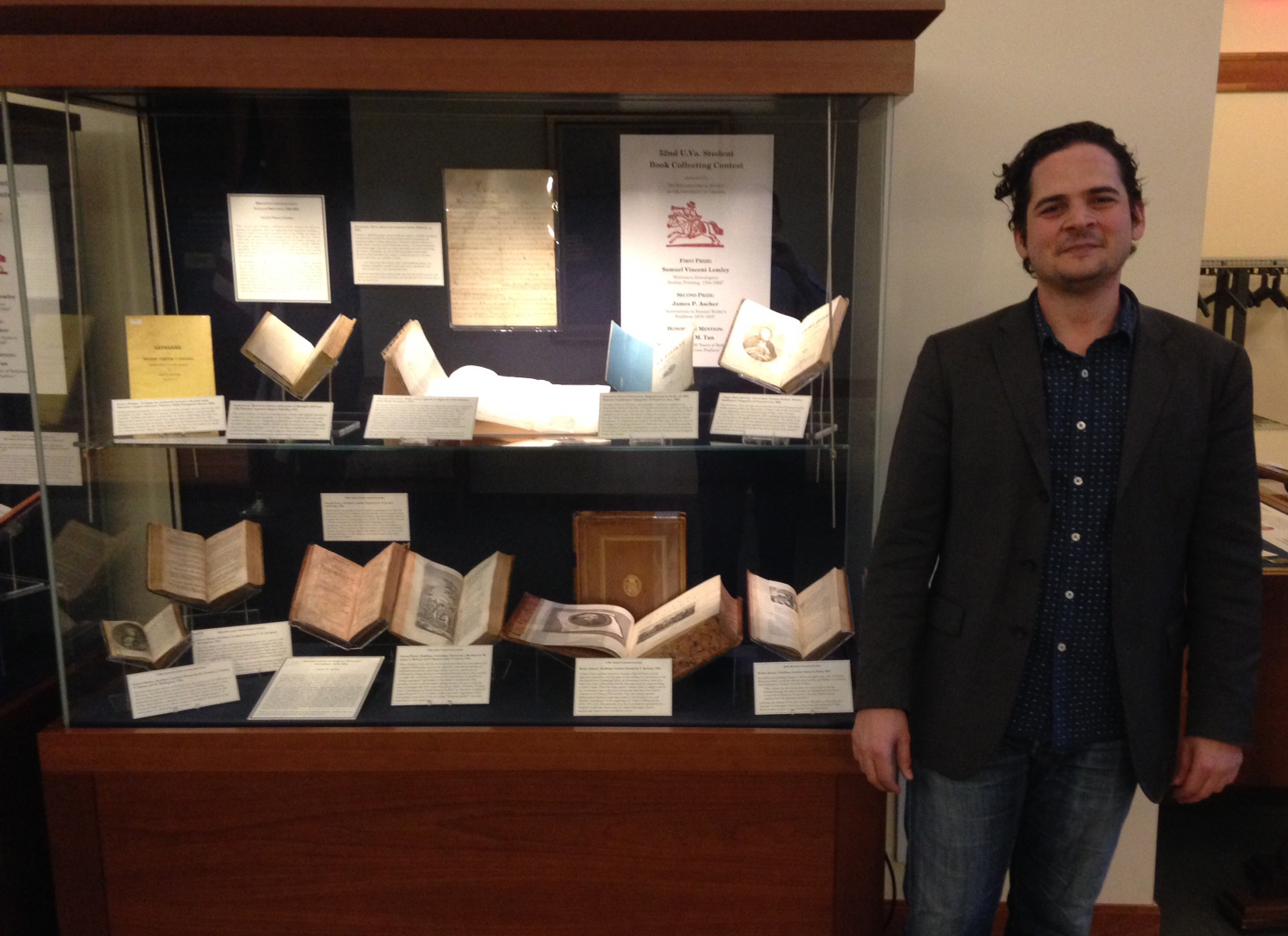 Second prize went to James P. Ascher, a Ph.D candidate in the Dept. of English, for “Annotations to Samuel Butler’s Hudibras 1678-1858.”  Ascher notes: “Samuel Butler rose to international notice when he published the first part of Hudibras in 1662. Set during the Civil War of the 1640s, the poem weaves together his years spent in libraries transcribing into his commonplace books, with satires on hypocrites, Romances, and pointless conflict. This topic must have appealed to readers during the Restoration, but thirty years after the Civil War, the allusions to current events were no longer current, so Butler added annotations to a new edition of 1674. These annotations explained topical references, demonstrated the learned depth of his commonplace reading, and—in many cases—added to the joke. The annotated poem invited future editors to add comments that explain, enhance, and enchant. This is a collection of the available primary evidence for the publishing of these annotations: the books themselves.” 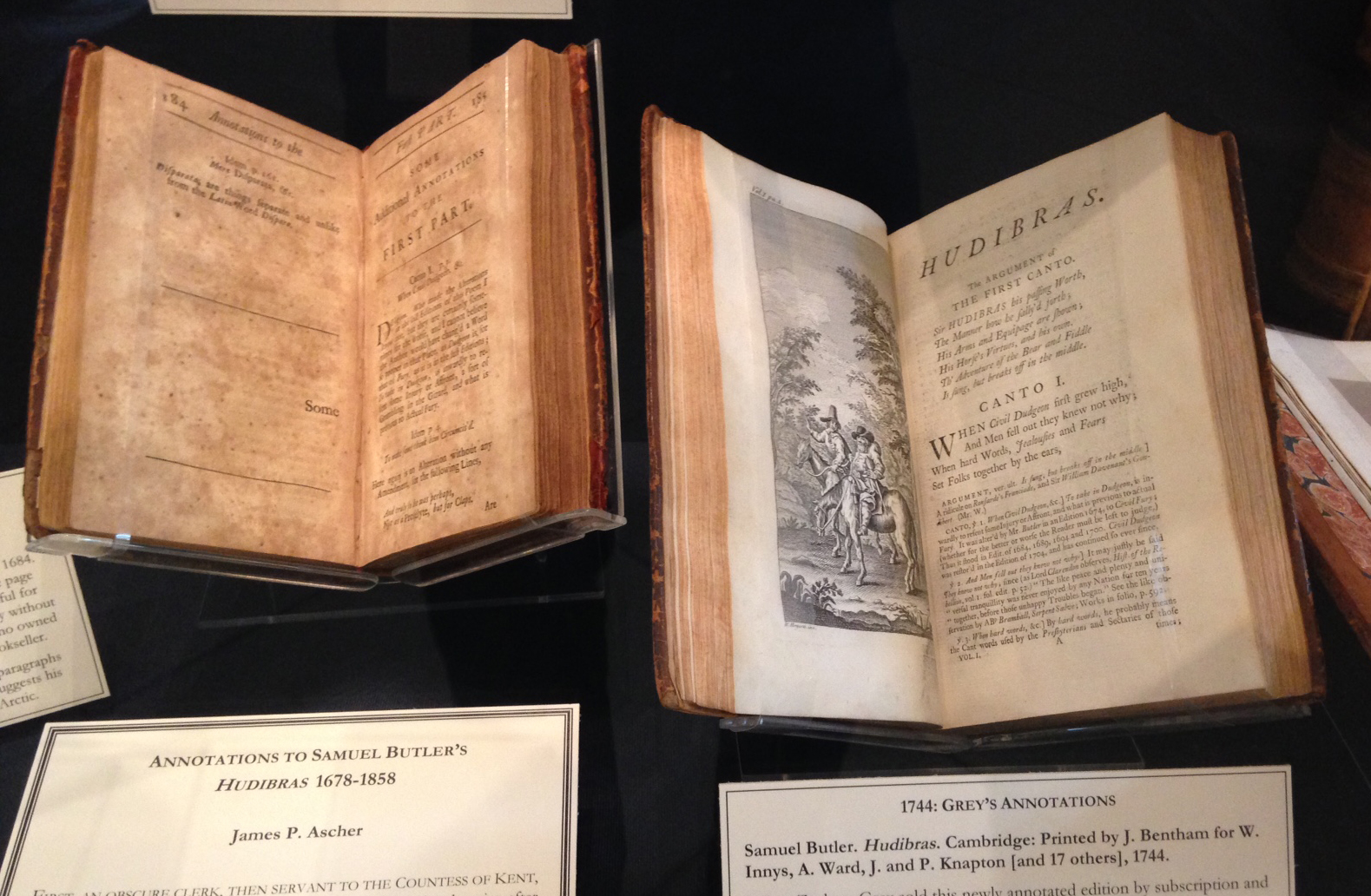 The 1684 and 1744 annotated editions of Samuel Butler’s Hudibras.

Honorable mention was awarded to Philip M. Tan, a fifth-year doctoral student in the Dept. of Biomedical Engineering, for “Singing Through 500 Years of Reformed and Presbyterian Psalters.”  Tan comments: “Unlike most books, meant to be merely read and contemplated, psalters are the gear for an intense athletic activity—singing! In a tradition extending over three millennia, Jews and Christians have united mind, body, and soul to sing these ancient Hebrew compositions, a practice my friends and I continue today. I grew up in small reformed Presbyterian congregations where the 150 psalms were sung from the 1973 RPCNA Book of Psalms for Singing, but we were always discovering new arrangements and adding them to our repertoire. Eventually I began purchasing other psalters, or begging the more obscure ones off of church music directors in the course of travels. Although the collection primarily comprises reformed Presbyterian metrical psalters originating from the Scottish and Dutch traditions, I am eager to expand its scope to encompass the rich heritage of psalm chanting within the Anglican, Roman Catholic, and Eastern Orthodox traditions.” 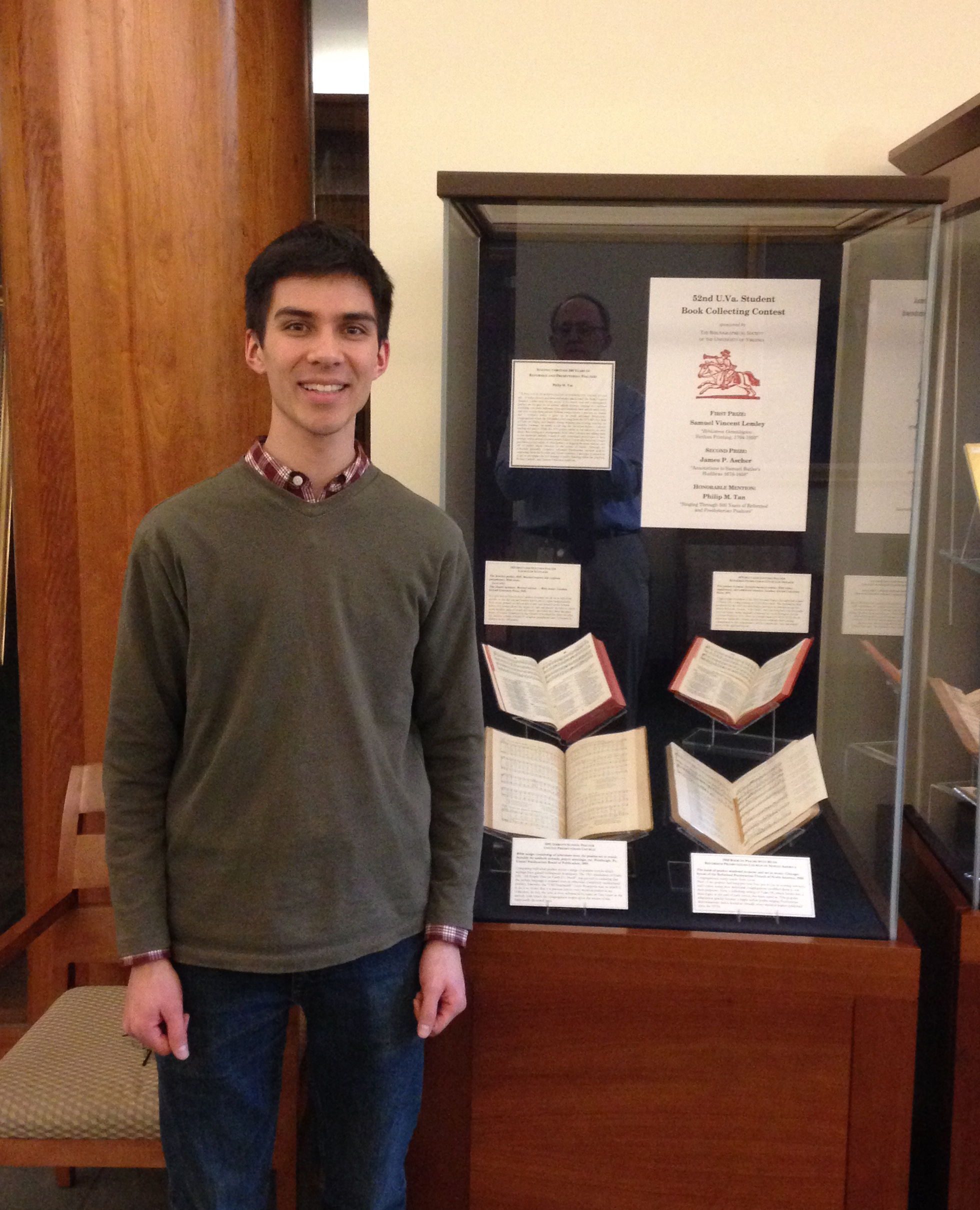 Philip M. Tan with selections from his collection of psalters.