This week we feature a guest post from George Riser, special collections staff member and one of the curators of our current exhibition, “Faulkner: Life and Works.” George was responsible for the “Works” portion of the show, and we asked him if he would reflect on the experience.

Last spring, I was asked to participate in the upcoming exhibition, Faulkner: Life and Works, and I accepted with enthusiasm and some trepidation. For I knew Faulkner’s reputation as one of the most celebrated writers of the twentieth century would mean that he is as well one of the most scrutinized. I was charged with displaying the nine holograph manuscripts of Faulkner’s novels the University of Virginia Library holds, as well as dedicating exhibition cases to poetry, to short stories, and an array of ancillary materials — letters, drawings, early drafts, and commentary that relate to each novel, story, or poem displayed. And there was an incredible wealth of material from which to choose at the University of Virginia Special Collections — “an obscenity of riches,” as former curator Joan Crane once noted. 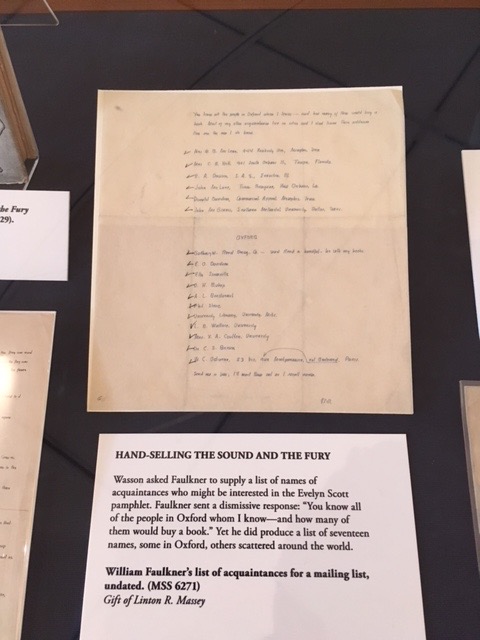 While working on the label text for these works, I thought about the affinity I felt for these stories and novels, and for the hundreds of characters that populate Mr. Faulkner’s fictional county of Yoknapatawpha and his town of Jefferson. And I knew that part of the appeal for me came from a familial connection to the geography and the people of Faulkner’s Mississippi.

My grandfather, Conrad McRae, was born in 1897, the same year as William Faulkner, and grew up in Brandon Mississippi, about two hours south of Faulkner’s hometown of Oxford. They both had connections to the railroads — my grandfather as a ticket agent and conductor, Faulkner through his paternal great-grandfather, who started one of the first railroad lines in Mississippi. I have imagined Faulkner riding the train to, say Clarksdale, my grandfather taking his ticket as he strolled down the aisle, and I’ve wondered if they might have passed each other on the back streets of Memphis on their way to seek out bootleg whiskey during the dry Prohibition era.

My grandfather’s people, the McRaes, came to Mississippi in a wave of nineteenth-century Scotch-Irish immigrants, the same as Faulkner’s McCaslins and MacCallums, and it was no stretch to see members of my extended family fitting quite snugly within the pages of any number of his stories, poems, and novels. As I was growing up, we spent three weeks each summer in Mississippi, and I got to know many of my “Faulkner” relatives — my mother’s Uncle Dick in his falling-down shack back in the remote pine forests east of Jackson, or Uncle Cap, the wall-eyed bachelor who raised goats and lived with his sister, Maggie, who kept a few cows and a henhouse full of laying hens, (a few who had taken up residence on her back porch). And there were many others, as my extended family included a number of would-be Compsons and Snopes, Sartorises and Bundrens, and I sometimes wondered if I too, though now far-flung, might still be considered a Faulkner descendant. And then the realization — we all are. 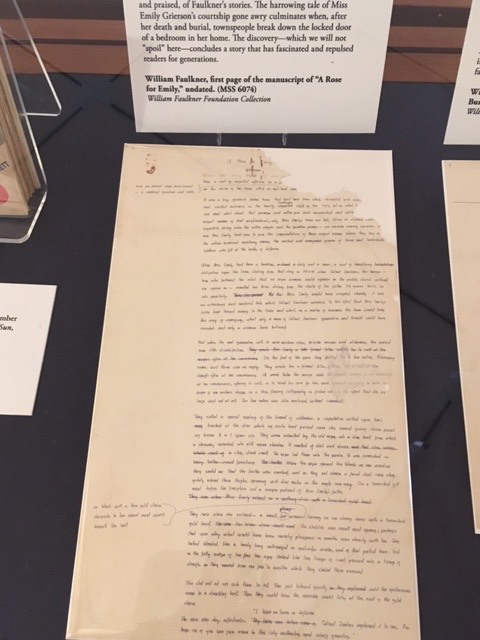 The romantically torn first page of the manuscript for “A Rose for Emily” (MSS 6074).

One thought on “Staff feature: On curating “Faulkner: Life and Works””