This week’s feature is a post by George Riser, Collections and Instruction Assistant for the Albert and Shirley Small Special Collections Library.

“American Broadsides to 1860 features 72 broadsides—almost exclusively American and dating prior to 1860—drawn from the holdings of the Albert and Shirley Small Special Collections Library. Arrayed in six sections—Proclamations, Political, Military, Goods and Services, Town and Country, and Literary Arts—these examples attest to the broadside’s varied content and breadth of function, while offering a fascinating account of life in early America. They also complement what is perhaps the most significant of all American broadsides: the “Dunlap Broadside” (first printing of the Declaration of Independence) on view in the adjacent Declaration Gallery.” Text by David Whitesell from the exhibition’s introductory panel. 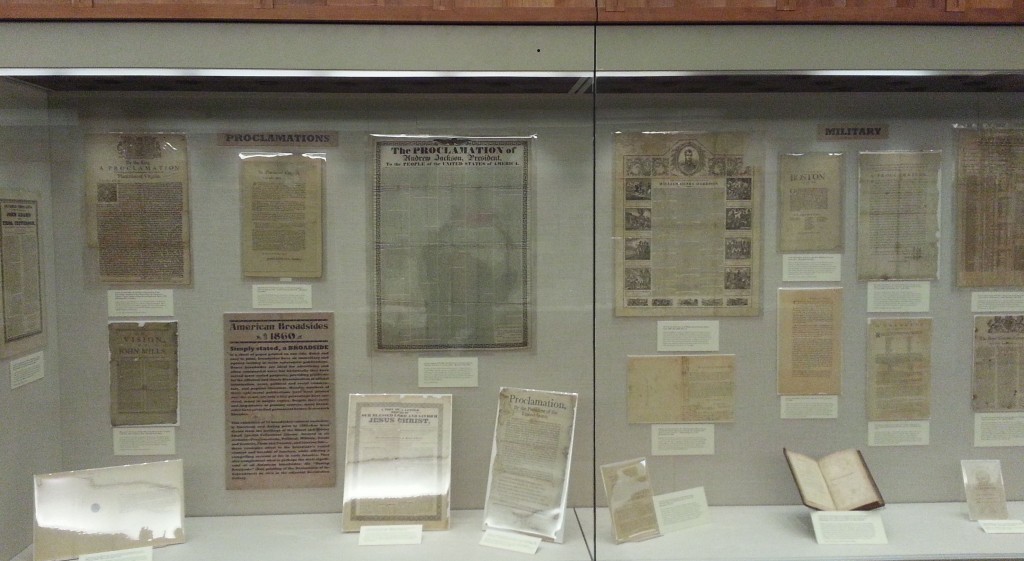 One case of the exhibition American Broadsides to 1860. Photograph by Petrina Jackson.

The following is a sampling of what you will find in each of the exhibition’s sections.

The earliest broadside on display is found in the “Proclamations” section. “By the King. A Proclamation for the Suppressing a Rebellion Lately Raised Within the Plantation of Virginia,” is King Charles II’s 1676 response to Nathaniel Bacon’s rebellion, which was raging in the fledgling Virginia colony. 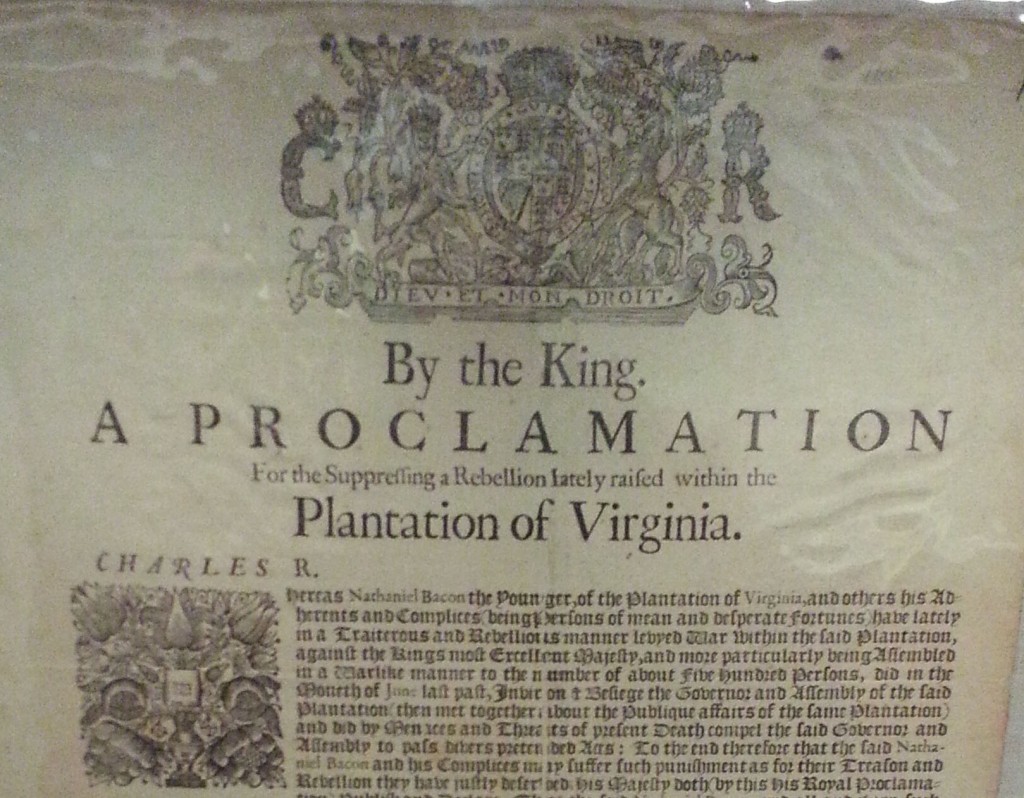 Detail of Charles II (1630-1685). By the King. A Proclamation for the Suppressing a Rebellion Lately Raised Within the Plantation of Virginia. London: Assigns of John Bill and Christopher Barker, 1676. (Broadside 1676 .G744 S63). Photograph by Petrina Jackson.

In the “Military” category, “Boston, 26th of June, 1775,” features a first-hand account, printed just nine days after the Battle of Bunker Hill, offering a somewhat rosy view of the catastrophic attempt to dislodge 1,200 colonial troops who had taken up positions in the hills surrounding Boston. 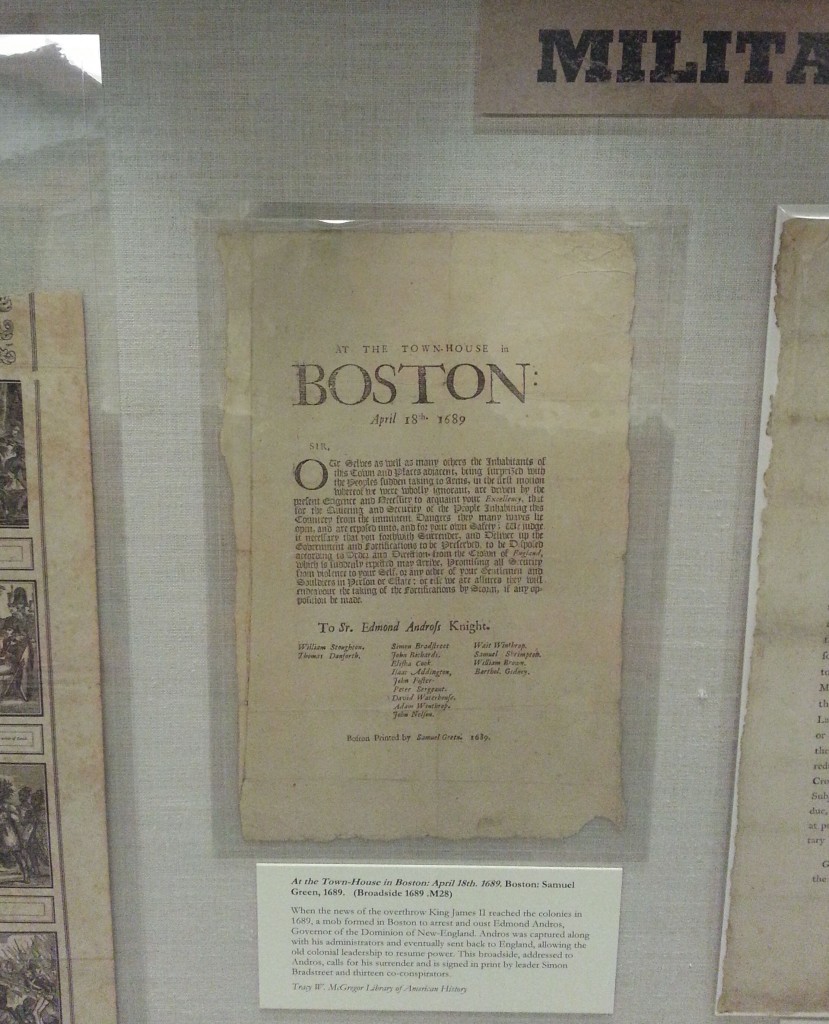 In the “Political” section, the “Declaration of the Anti-slavery Convention, 1833,” calls for the formation of a national anti-slavery society—henceforth to be known as the American Anti-Slavery Society—and lists the names of delegates from ten states. 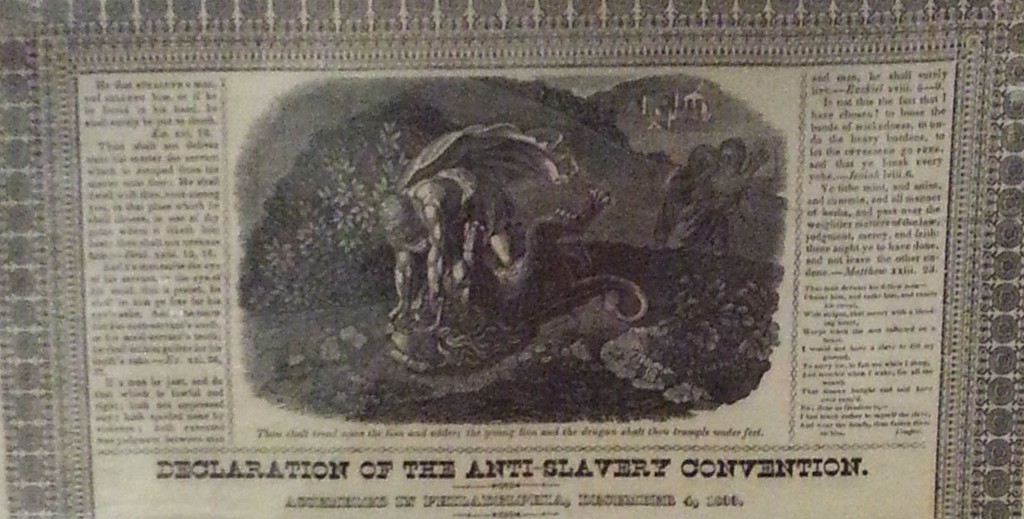 The “Farm and Country” category features an 1828 broadside advertising a Gander Pull outside of Petersburg, Virginia. A Gander Pull involves the hanging of a neck-greased goose upside down from a scaffold, whereby well-lubricated participants attempt to decapitate the bird as they ride past at full gallop. The event also featured a fish dinner and a barbecue. 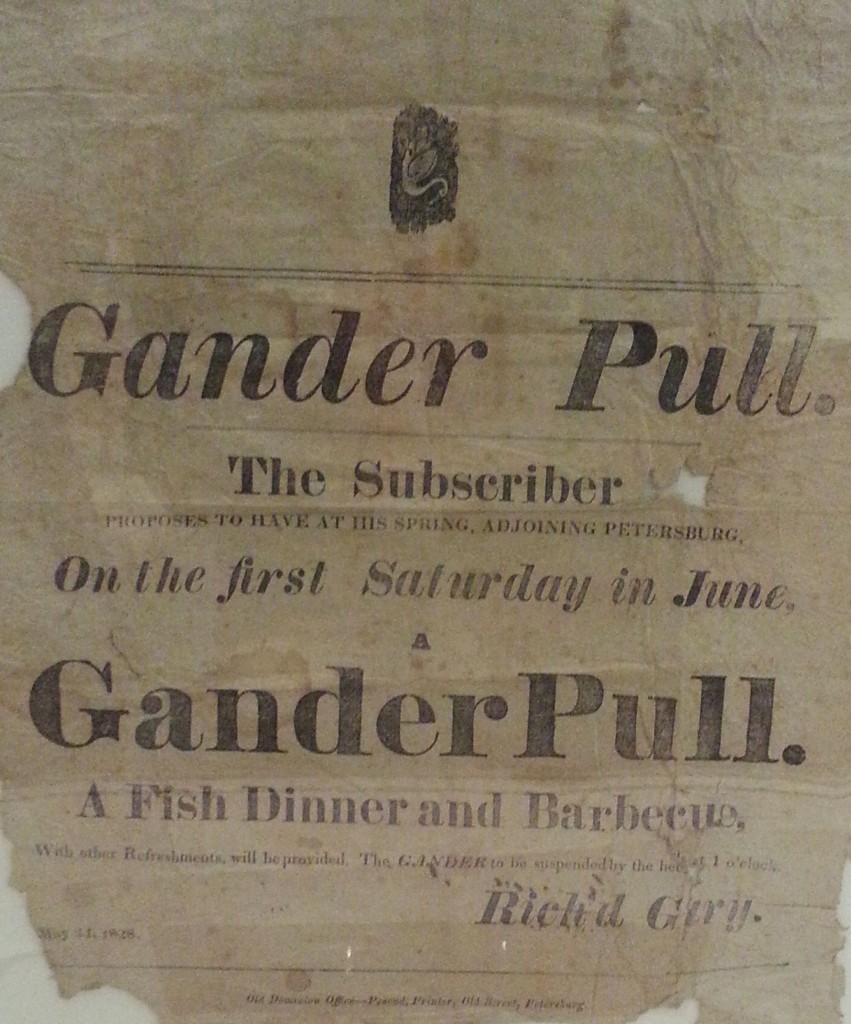 Two University of Virginia broadsides are found in the “Goods and Services” section: “Explanations, of the Ground Plan of the University of Virginia,” printed in Charlottesville in 1824. This broadside, printed to accompany Peter Maverick’s 1822 engraved “Plan of the University,” describes the pavilions, locations of the hotels, and the placement of the Rotunda, as well as the general layout of the only partly completed university Grounds. The 1825 program, “University of Virginia. This Institution Was Opened on the 5th Day of March, 1825,” was used to draft the text of the program for the second session of 1826. The first line—“This institution was opened on the 5th day of 1825”—is crossed out and changed in manuscript to read, “will commence its next session on the 1st day of February, 1826.” Other alterations indicate changes made for the second session. 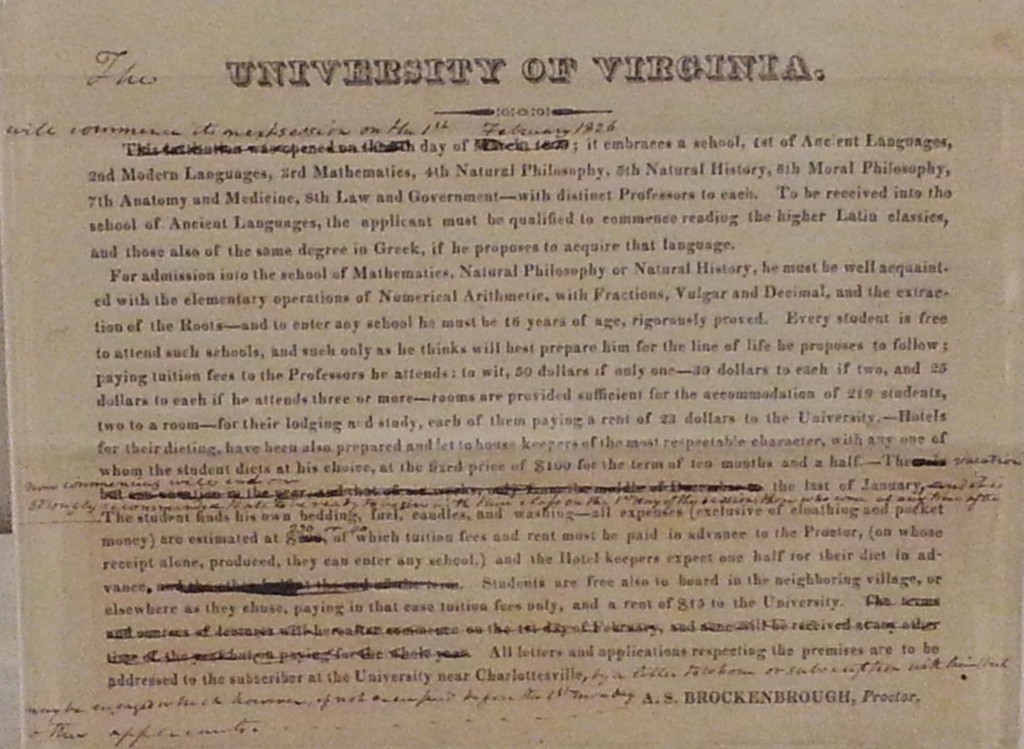 In the “Literary” section don’t miss, “Theatre. On Friday Evening, September 15th, Will be Presented the Grand Operatical Romance of The Forty Thieves.” This 1809 announcement for a performance at the Park Theatre in New York features appearances by both of Edgar Allan Poe’s parents, eight months after his birth. In this dramatization of Ali Baba and The Forty Thieves, Mr. [David] Poe appears as the 1st Robber, Mrs. [Elizabeth] Poe as the clever slave girl, Morgiana. 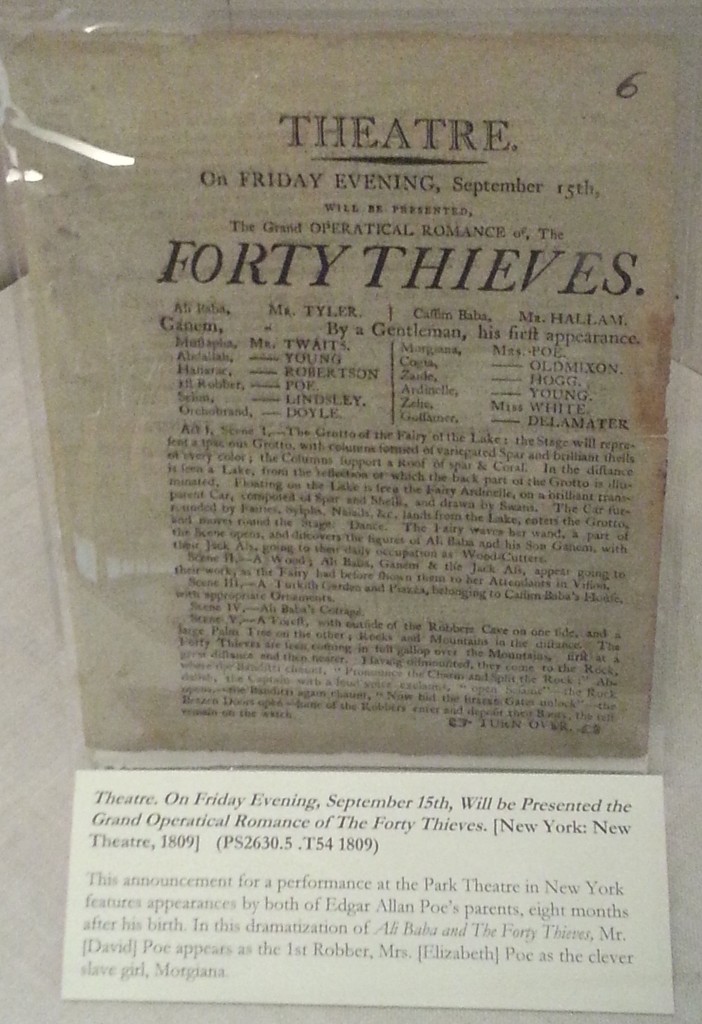 In addition, there are 64 other fascinating broadsides on display, each offering a unique and varied look at American culture in the seventeenth, eighteenth and nineteenth centuries. The exhibition may be viewed in the barrel-vaulted hallway on the first floor of the Harrision/Small building, just outside of the Albert and Shirley Small Declaration Gallery.