This week’s feature is a guest post by Kelly Fleming, Special Collections curatorial assistant and doctoral candidate in the U.Va. English Department.

“The Lure of Italy,” an exhibition drawn from Mildred Abraham’s personal collection of rare books on the Grand Tour, offers viewers a chance to travel back in time to experience the Italy famous for its classical origins, Carnival, and banditti. During the eighteenth century, Italy was usually the last stop on the Grand Tour. Sons of the aristocracy toured the continent with their tutors for one to three years in order to further their education and broaden their outlook. With the advent of the neoclassical aesthetic in the eighteenth century, Italy was the perfect place to study the art and the architecture of the ancients. 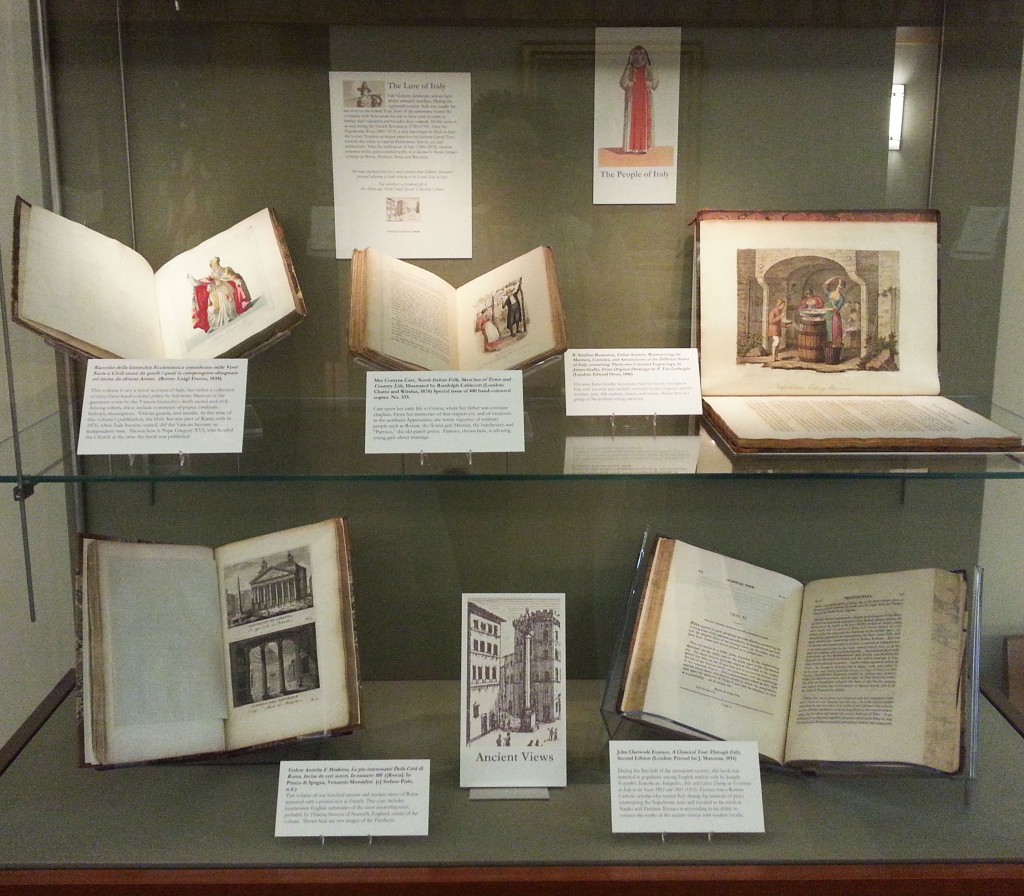 Books featuring the people of Italy and ancient views from the exhibition “The Lure of Italy.” Photograph by Petrina Jackson. 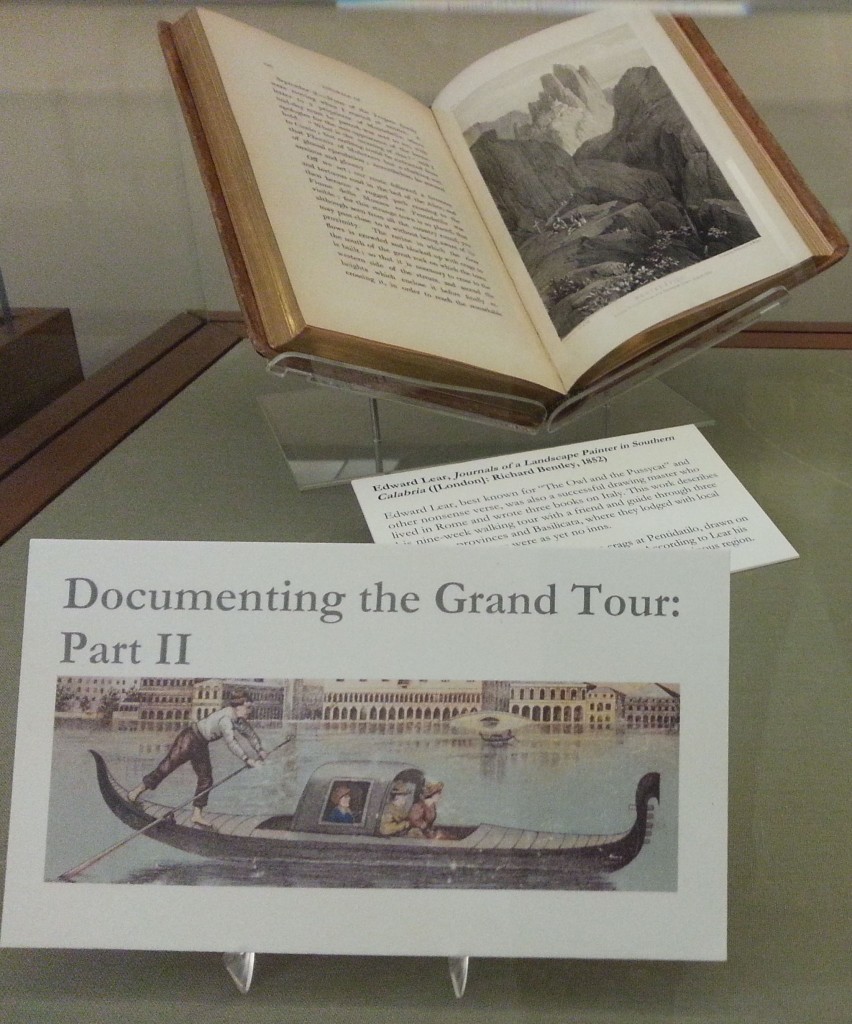 Detail from one of the exhibition cases. Photograph by Petrina Jackson.

In addition to their studies, men on their Grand Tours frequently attended the extravagant celebration of Carnival, participating in masquerade balls and grand parades. All this came to an end during the French Revolution (1789–1799). After the Napoleonic Wars (1803–1815), a new class began to flock to Italy: the tourist. Tourists no longer came for the classical Grand Tour. They travelled to Italy to explore the history, art, and architecture of the Renaissance. Moreover, a new group of travellers began to regularly tour Italy in the nineteenth century: Americans. As Abraham’s collection attests, women also began to travel to Italy in order to broaden their horizons. Frequently both male and female tourists turned their experiences in Italy into fictional works, such as Henry James’s Daisy Miller (1879), whose sketch “Italian Hours” appears in the exhibit, and Elizabeth Williams Champney’s novel, Three Vassar Girls in Italy (1886). “The Lure of Italy” contains exciting visual and textual sketches of the people, traditions, and landscape of Italy over the course of three centuries. 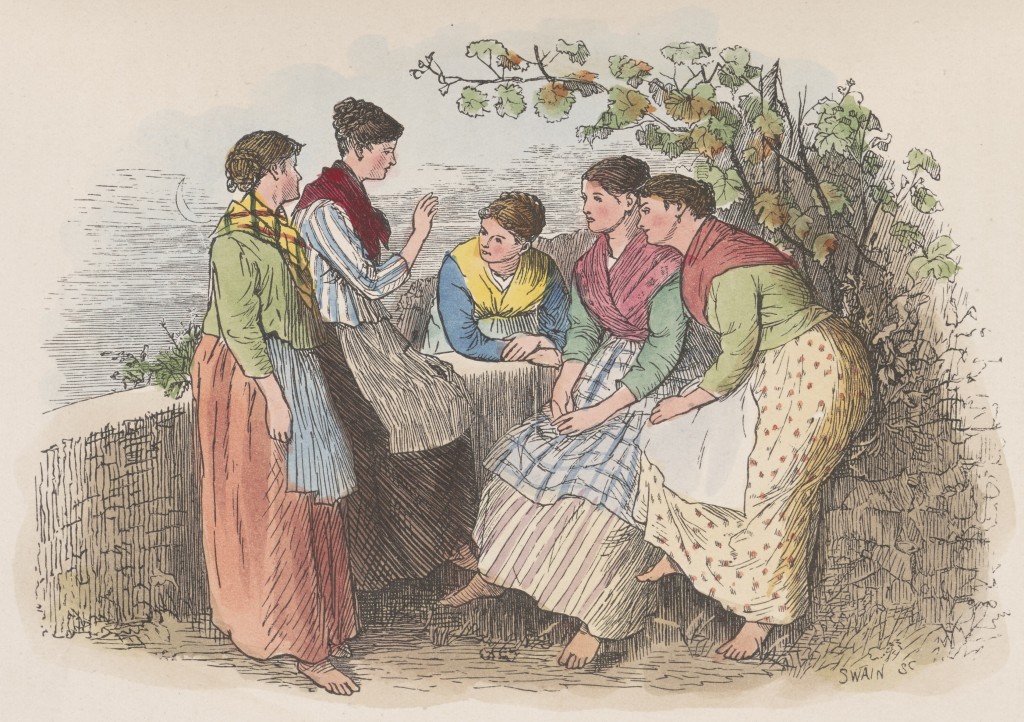 My favorite piece is a sketch of a rather dashing Italian bandit from Maria Graham’s Three Months Passed in the Mountains East Of Rome, During the Year 1819. 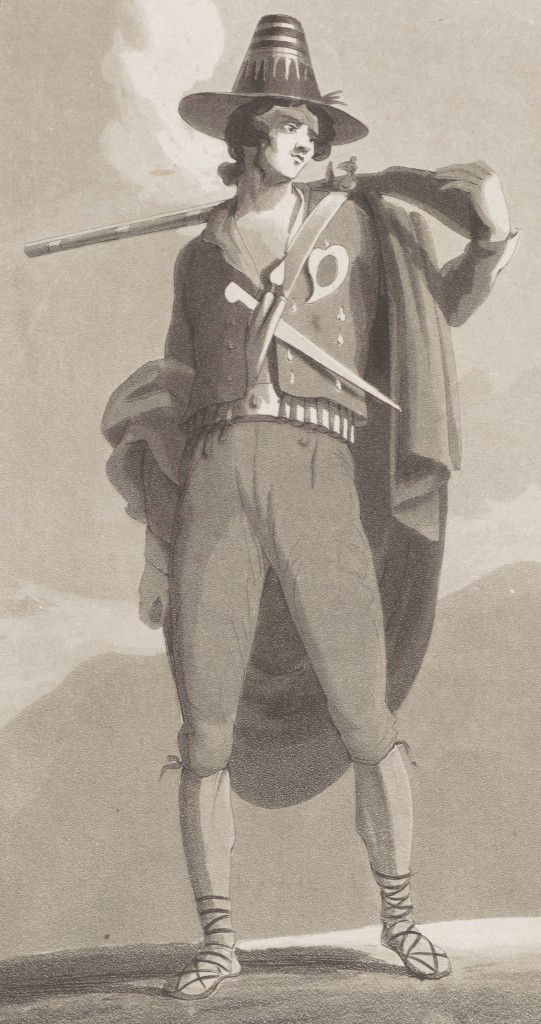 Mildred Abraham, a member of the prestigious Grolier club, was a Rare Books staff member for twenty-three years. Her collection contains hundreds of volumes on travel in Italy, ranging from the seventeenth through the early twentieth centuries. The bulk of her collection is described in Pine Coffin’s seminal work, The Bibliography of British and American Travel. Her collection, of which the exhibit is a small, but fabulous sampling, is a promised gift to the Albert and Shirley Small Special Collections Library. 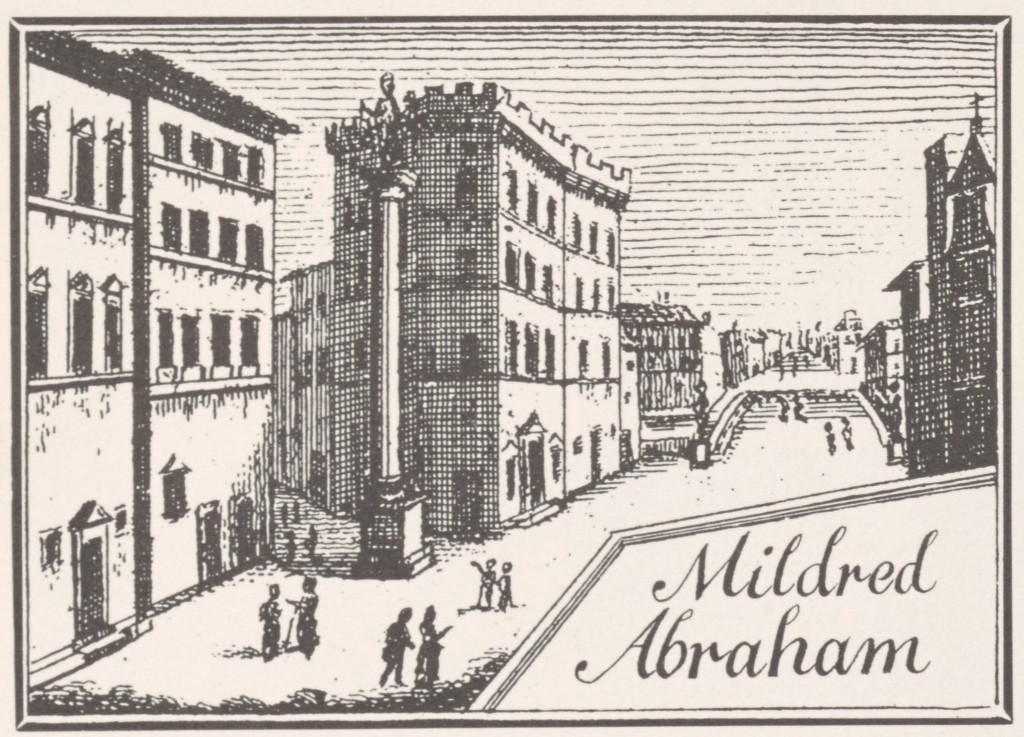 If you need some Italian color to combat winter’s gray skies, or if you’ve ever wondered what it would be like to ride a tandem bicycle on your honeymoon through Italy, come see “The Lure of Italy” at Special Collections.

“The Lure of Italy” is on display on the first floor of the Harrison-Small building through December 31, 2015.

6 thoughts on “On View Now: The Lure of Italy”