This is the final of four posts, spotlighting the mini-exhibitions of students from USEM 1570: Researching History. 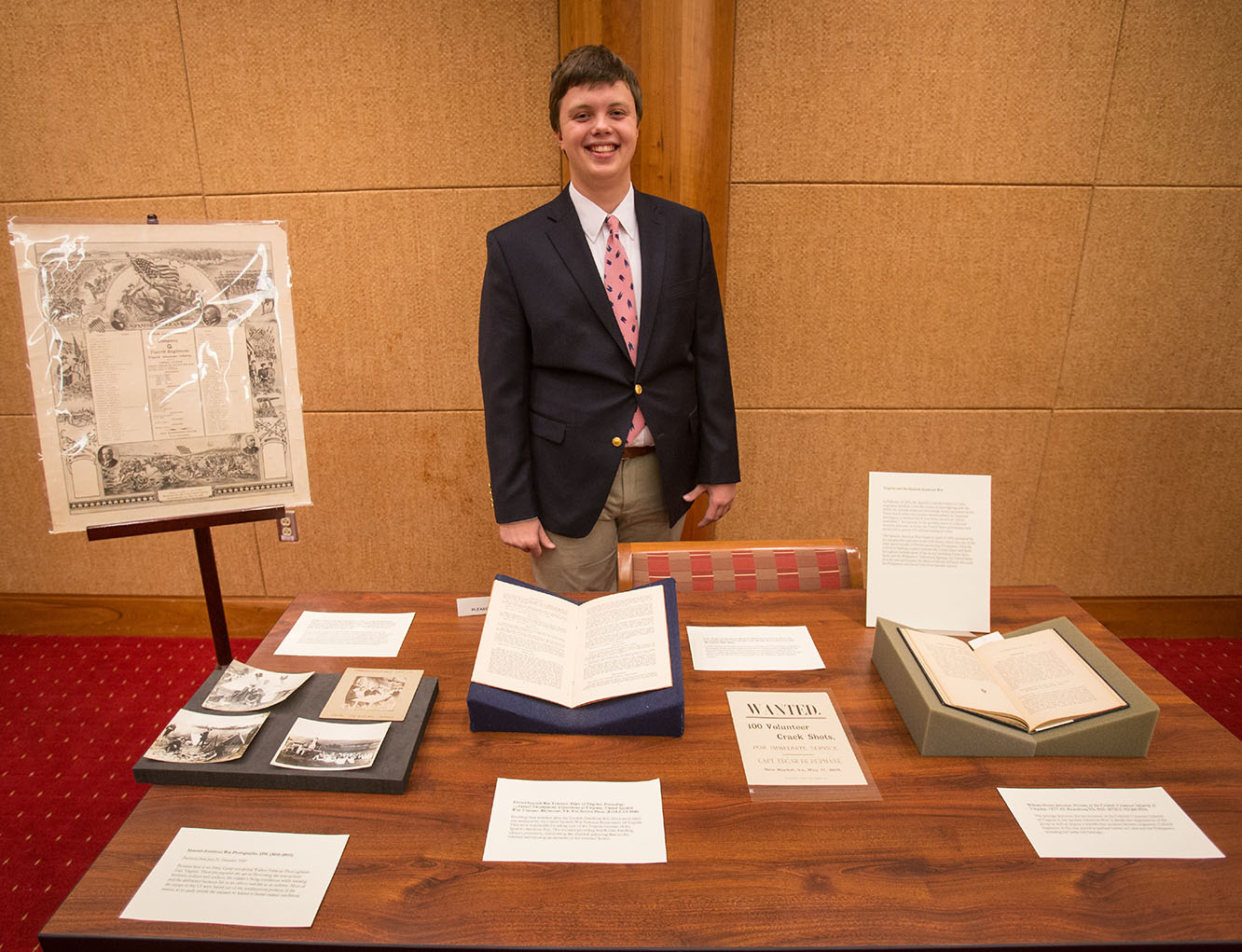 Virginia and The Spanish American War

In February of 1895, the Spanish-controlled island of Cuba erupted in rebellion. Over the course of their fighting with the rebels, the Spanish employed increasingly brutal repression tactics. These brutal tactics were further sensationalized by American newspapers, a method that is now better known as “yellow journalism.”  In response to the growing unrest in Cuba and domestic pressures at home, the United States government sent naval crafts to protect US citizens residing in Cuba.

The Spanish-American War began in April of 1898, prompted by the inexplicable explosion in the USS Maine, which was one of the ships based outside of Havana protecting U.S. interests. After the explosion, fighting erupted between the United States and Spain in various parts of the world, including Puerto Rico, Spain and the Philippines. Ultimately, the United States won the war, made Puerto Rico and the Philippines their territories, and freed Cuba from Spanish control.

This exhibition documents Virginia’s involvement in the Spanish American War. 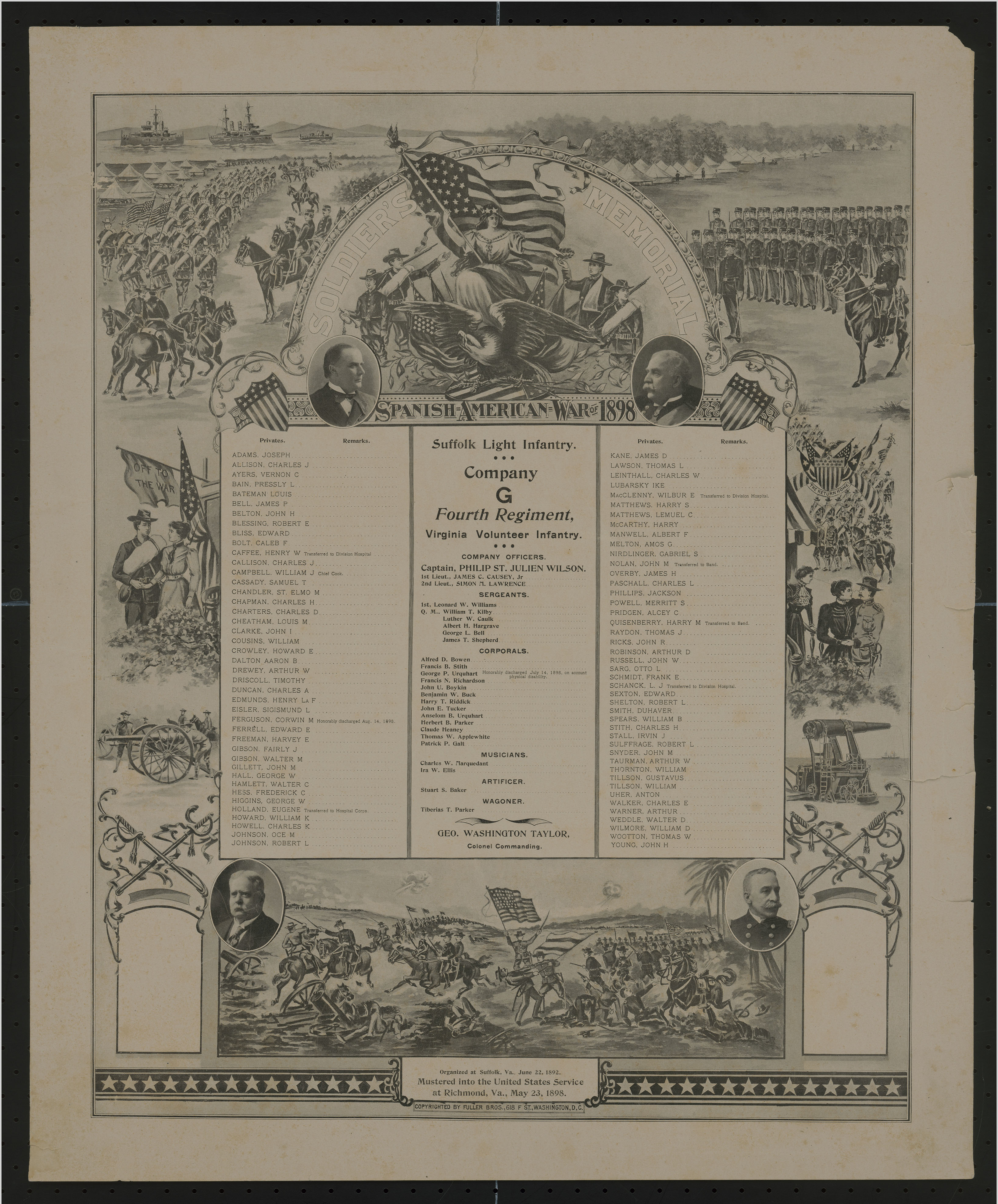 Soldier’s Memorial, Spanish American War of 1898: Suffolk Light Infantry. Company G. Fourth Regiment, Virginia Volunteer Infantry … Organized at Suffolk, Va., June 22, 1892 mustered into the United States Service at Richmond, Va., May 23, 1898. Washington, D.C.: Fuller Bros., 1898. (Poster 1898 .S73)
This poster portrays the Suffolk Light Infantry in combat, and in the middle, it lists members of the Company G, including officers. Virginia was expected to contribute heavily to the war, but outside of the involvement of a couple regiments, it served more of an ancillary role. Many supplies were shipped through Virginia’s ports, and camps were established throughout the state to train soldiers for combat. That being said, fourteen of the deceased sailors from the explosion of the USS Maine were originally from Virginia. 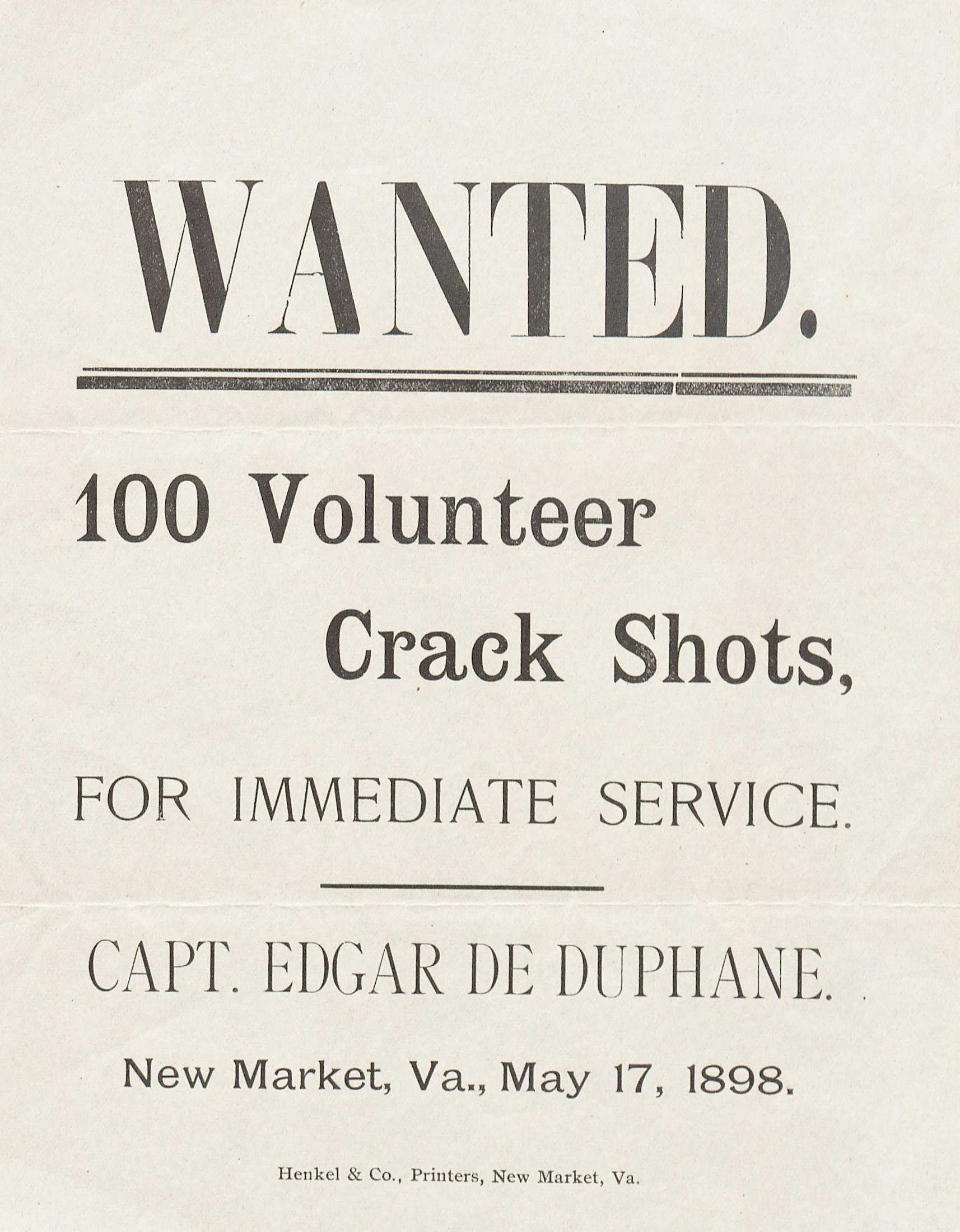 Capt. Edgar de Duphane. Wanted. 100 Volunteer Crack Shots, for Immediate Service. New Market, VA: Henkel & Co., Printers, 1898. (Broadside 1898 .D84)
Captain Edgar de Duphane posted this message in New Market, Virginia to encourage proficient shooters to join the U.S. Army at the outbreak of the Spanish American War. The shooters were then sent to various camps throughout the country for integration into the army. From there, they  fought against Spanish forces. 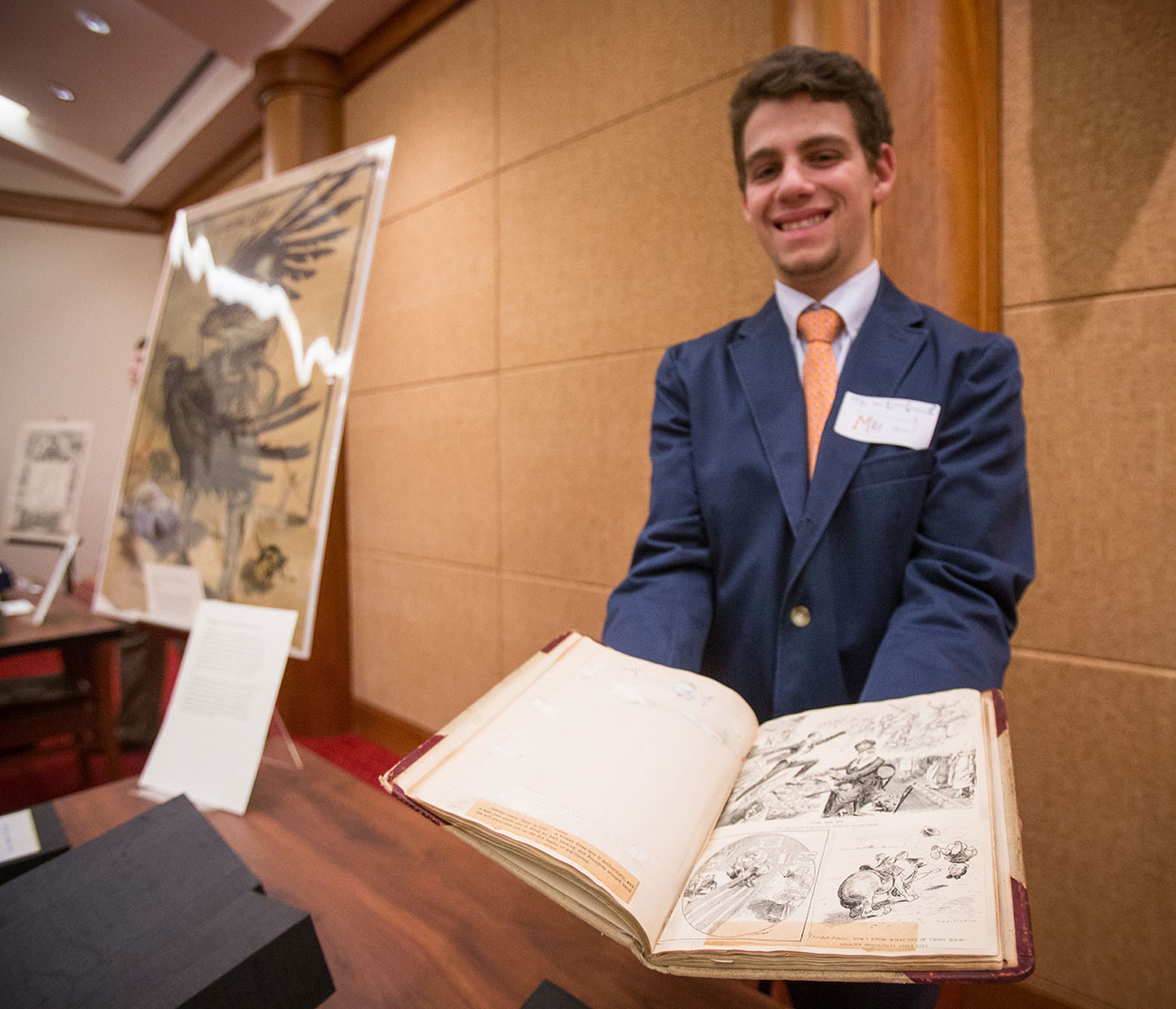 Propaganda and Sentiments of World War I

While World War I can be at times dwarfed by the magnitude of the Second World War, many of the same feelings of fear that the Allies expressed towards the German enemy still existed. Through this mélange of emotions, the use of propaganda became commonplace to strike fear in the heart of the enemy and to motivate the allied nations. Though propaganda can be quite coarse and grating, this mini-exhibition makes an attempt to display a few types of this curious art form.

Through the use of five dissimilar items, this exhibit moves in a somewhat linear fashion, from crass to serious, in order to capture the very essence of the emotions that were shared in the Allies battle against the Imperial forces.  Nevertheless, Novelist James Dickey’s sentiments to a major donor to Virginia of this era caps the exhibition in its ability to look beyond the pairing of one side versus another and at the real issue of humans versus humans. 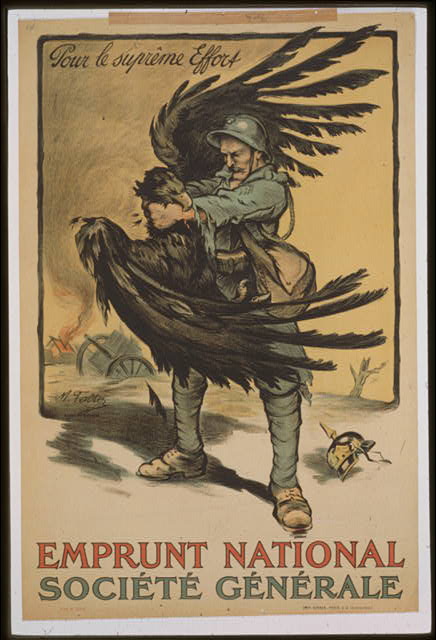 Falser, M. “Pour le suprême effort.” World War I posters 1914-1918. (MSS 5023-b) Robertson Gift Dec. 1969
Produced in 1918, artist M. Falser shows a darkly colored image of a French soldier in fierce combat with an eagle. This black eagle as well as the helmet known as a Pickelhaube are signs of the German Imperial Army. The violent force with which the French soldier maims this Imperial enemy seeks to inspire hope and courage within the nation of interest and to deflate the image of the enemy. 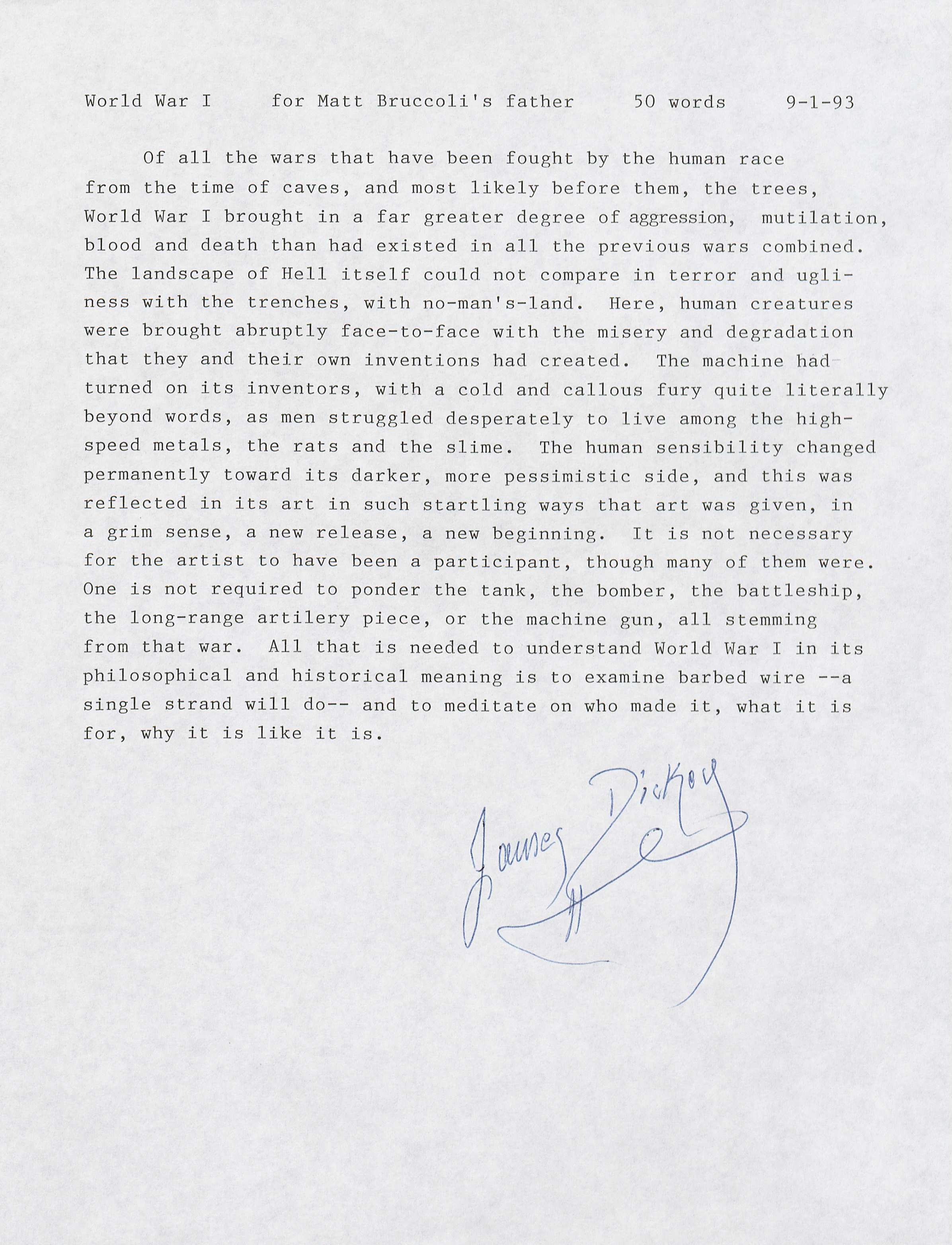 By arrangement with the Heirs of James Dickey and their agents Raines & Raines. James Dickey. Letter for Matt Broccoli’s Father, July 1997. (MSS 10875-s) Bruccoli Great War Collection. Gift of Matthew J. Bruccoli.
Famous American novelist, James Dickey, through this extremely personal letter, offers a writer’s input on the war. This letter looks beyond the simplicities of propaganda and talks about war’s more virulent nature. This note does not degrade the enemy in any way, but rather looks at the matter from the perspective of a human being to express the atrocities and horrors that war imposes on mankind. 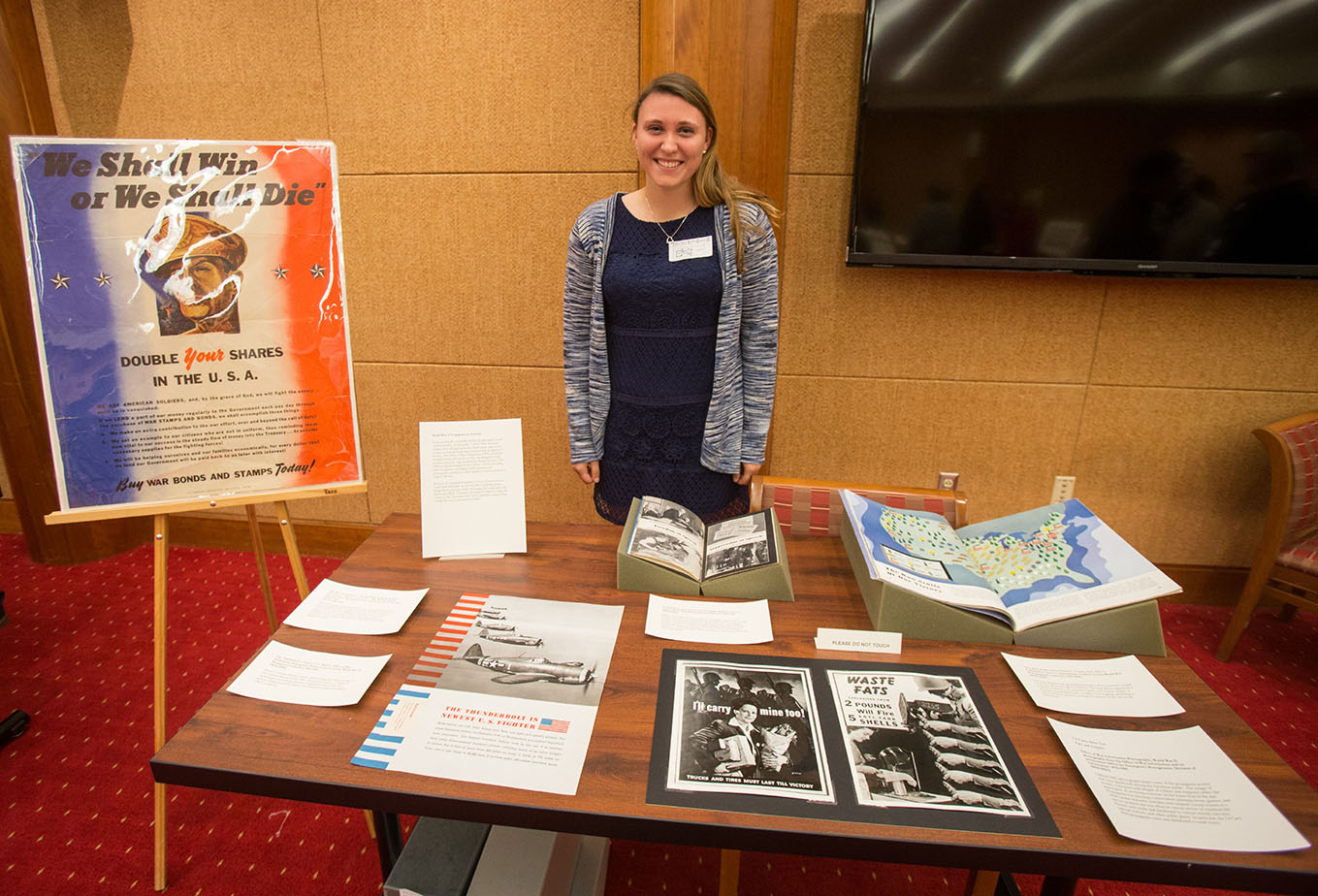 America officially entered World War II after Japan’s attack on Pearl Harbor on December 7, 1941. While American soldiers were off fighting for the Allied cause, other forces worked to keep the home front involved and in support of the war. The Office of War Information (OWI), created by Franklin Delano Roosevelt in 1942, was designed to help mobilize domestic support and keep citizens informed. The OWI produced propaganda, such as radio broadcasts, newspaper articles, posters, and photographs that served as a direct appeal to citizens at home to support the war.

Much of the propaganda tended to focus on how everyone could “play their part” in the war effort, including buying war bonds, rationing, and conserving scrap metal and rubber. Ultimately, propaganda helped to shape the culture of the American home front, sparking a unified effort to help fight the war by any means possible. 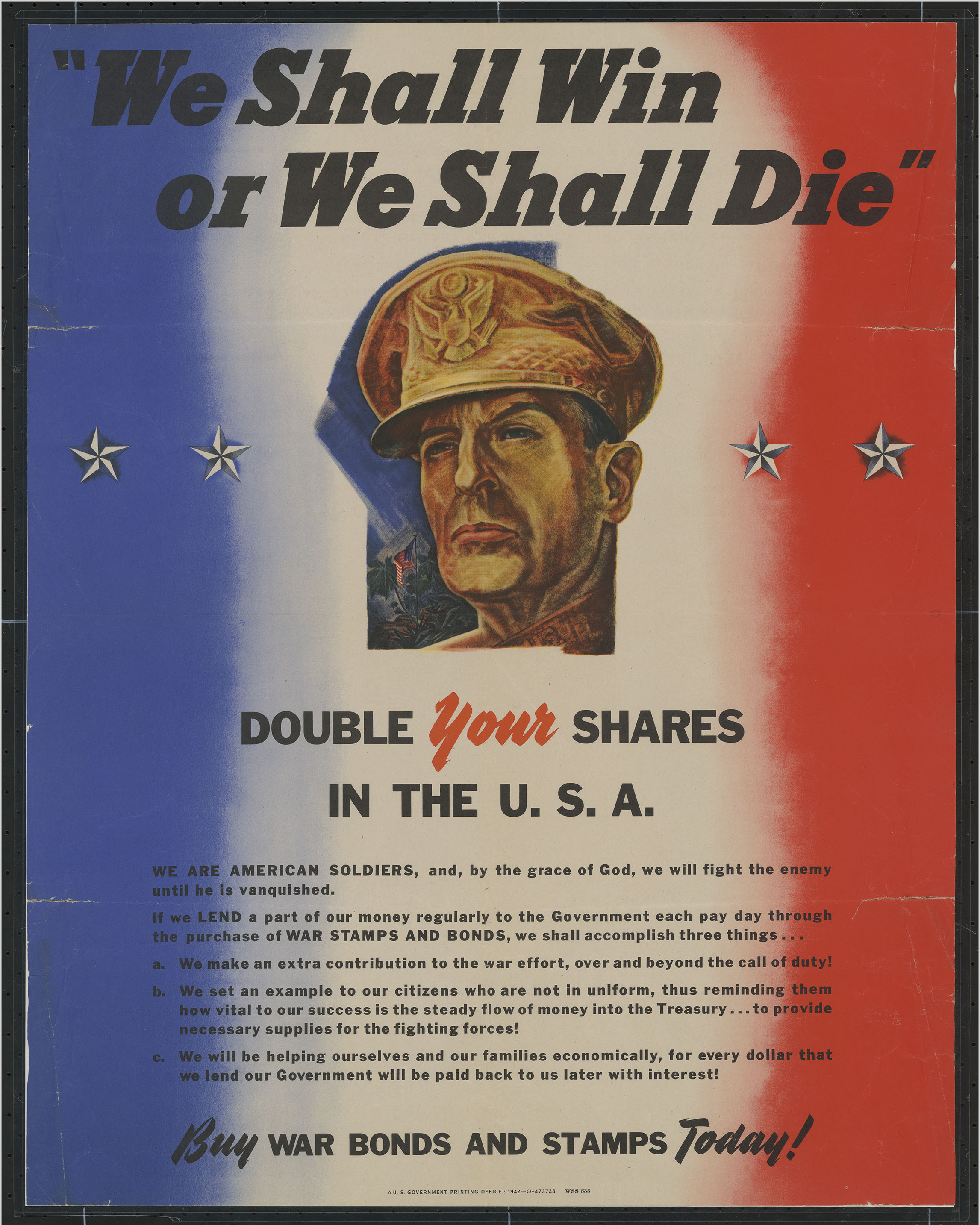 1942 War Bonds Poster. “We Shall Win Or We Shall Die”: Double Your Shares In the U.S.A. … Buy War Bonds and Stamps Today!. Washington, D.C.: U.S. Government Printing Office, 1942. (Poster 1942 .W4)
This 1942 propaganda poster advertises the sale of war bonds as a way for people at home to contribute to the war effort. Since World War II was a “total war,” patriotic propaganda was used to garner support for the war on the American home front. The poster’s language serves to unite soldiers with civilians back home in a combined revenue-raising effort that both financially and morally supports the war. 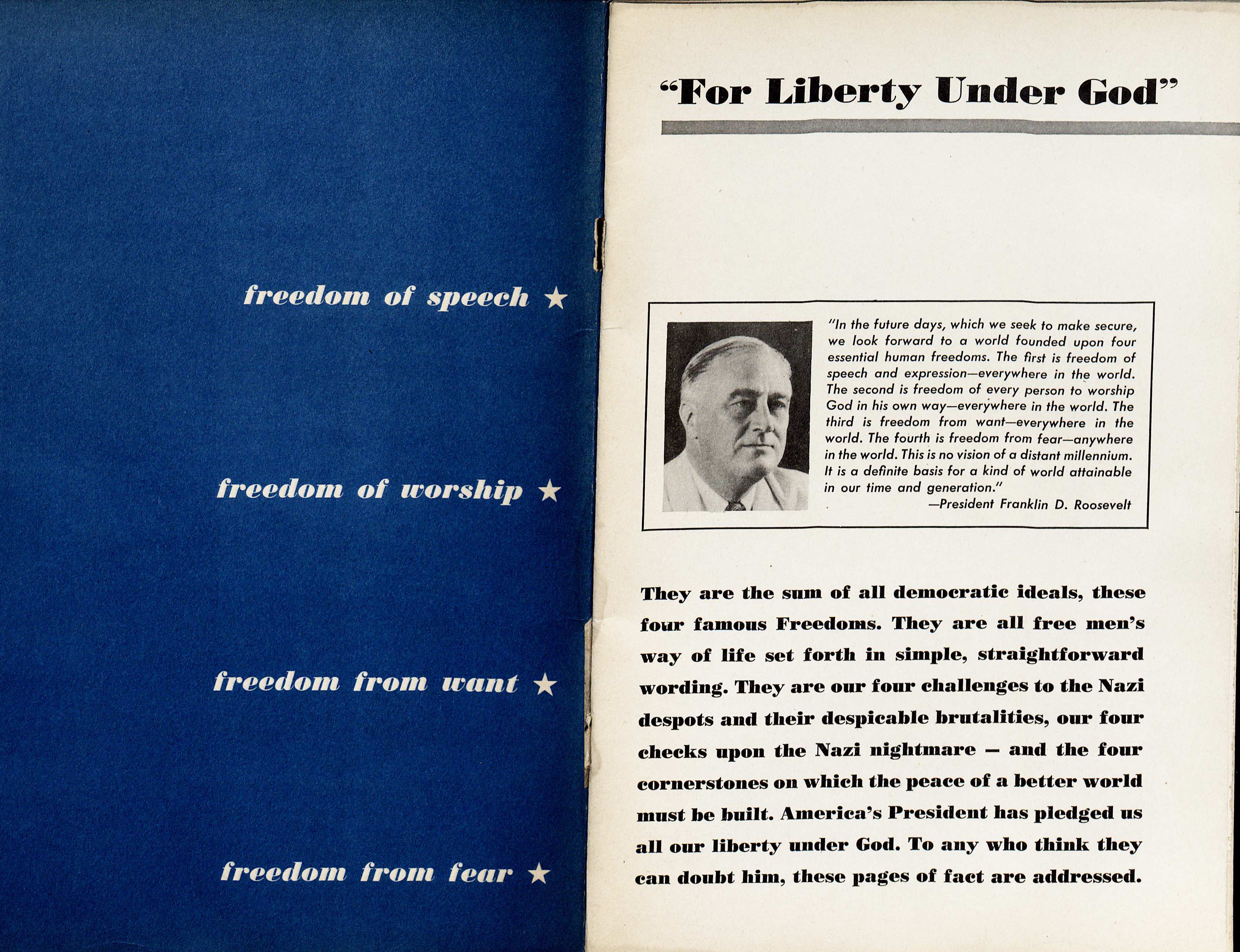 United States of America. Four Freedoms Booklet. Louis G. Cowan World War II Propaganda Collection, 1941-1946. (MSS 11569)
Based on Franklin D. Roosevelt’s Four Freedoms speech, this booklet elaborates how the freedoms of speech and worship and the freedoms from want and fear operated in America. The booklet contrasts pictures of America’s happy children, education systems, and plentiful harvests with pictures of the violence, government restrictions, and food lines in Axis countries in order to promote the Allied war efforts. 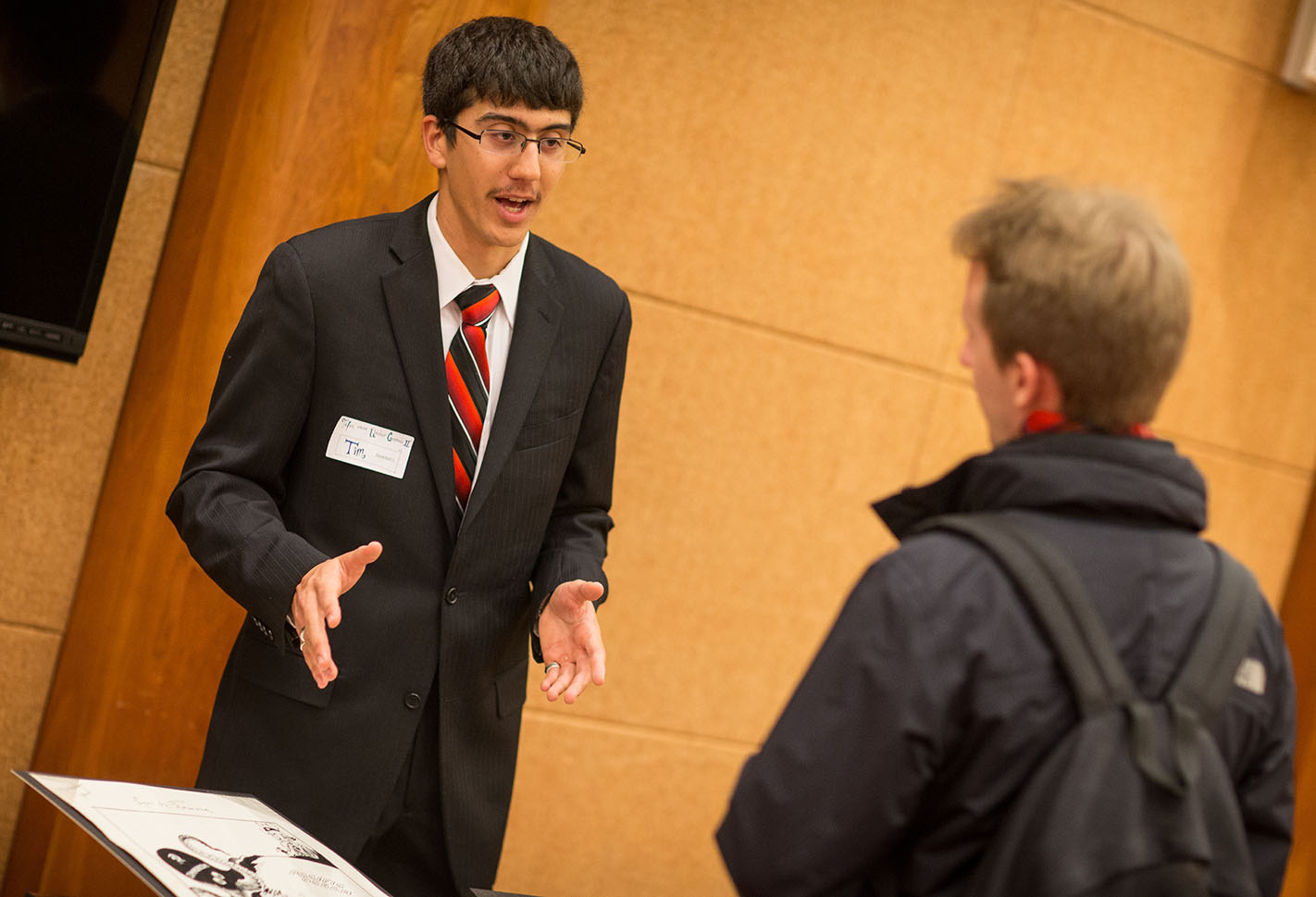 Timothy Rodriguez talks to a attendee about his exhibition, November 18, 2014. (Photograph by Sanjay Suchak)

Cold War Propaganda in the United States and the Soviet Union

The Cold War, which started in 1946 after the end of the Second World War, produced a significant amount of propaganda on both sides. In the United States, this propaganda was focused against the nature of the communist regimes in Soviet Bloc countries and on the ideals of communism. For the Soviets, the propaganda was more focused on convincing citizens that their system of governance and economic structuring was superior to capitalist countries like the United States.

This exhibition contains propagandist pictures, literature and broadsides that represent some of the most subtle and blatant propaganda of the Cold War. Sources include both the Soviet and American governments as well as special interest groups with Anti-communist agendas. 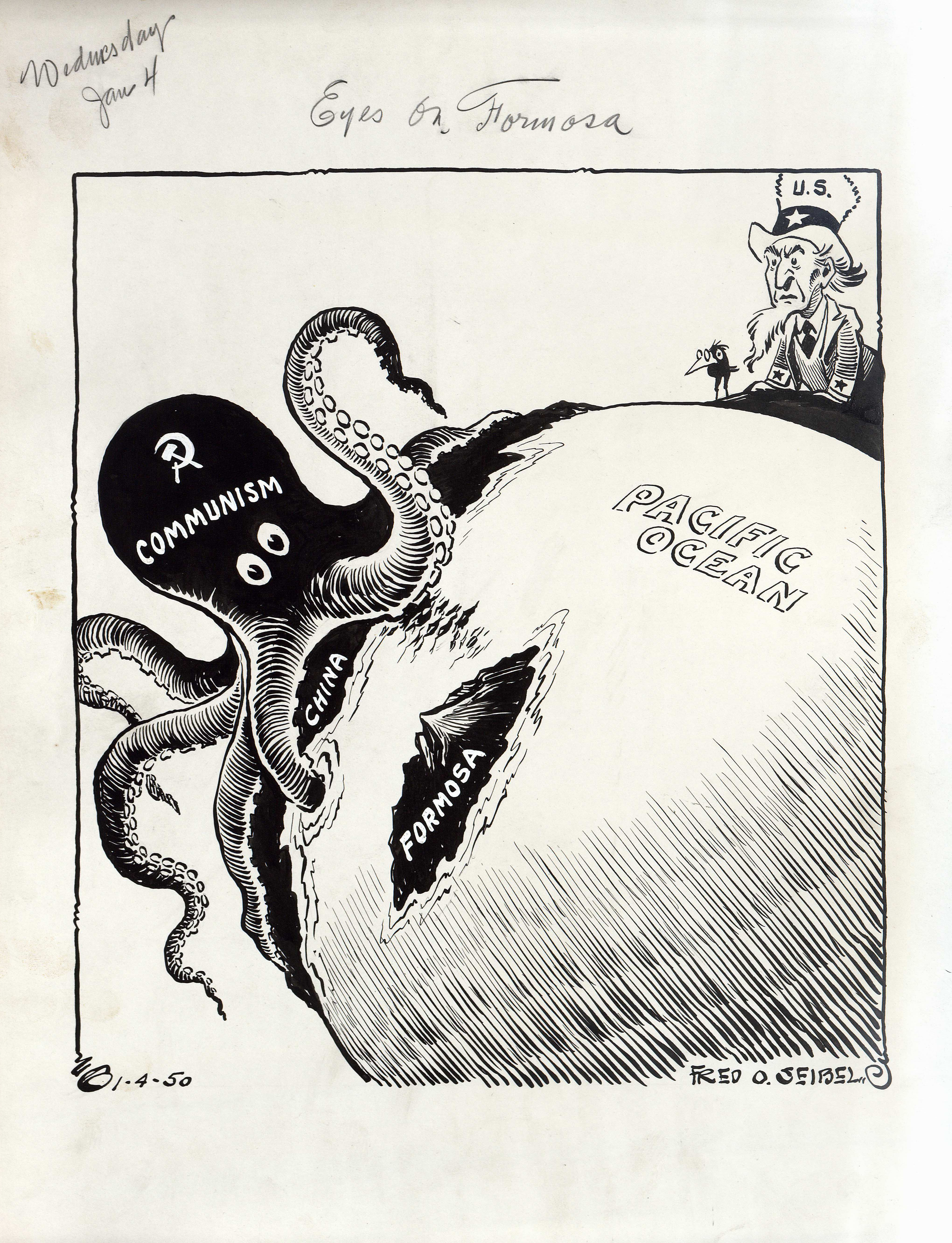 Siebel, Fred O. “Eyes on Formosa.” Richmond Times Dispatch. 1 Jan. 1950. Original drawing by Fred Seibel. (MSS 2531)
Published in the Richmond Times Dispatch, this Fred Siebel cartoon is a piece of American anti-communist propaganda and political commentary. The depiction of communism as a gigantic octopus, embossed with the Soviet Union’s hammer and sickle, is a clear statement of the American perspective of communism as an expansionary threat to the world. The cartoon conveys the intent of the communists, specifically in China, to take over the island of Formosa, now known as Taiwan. 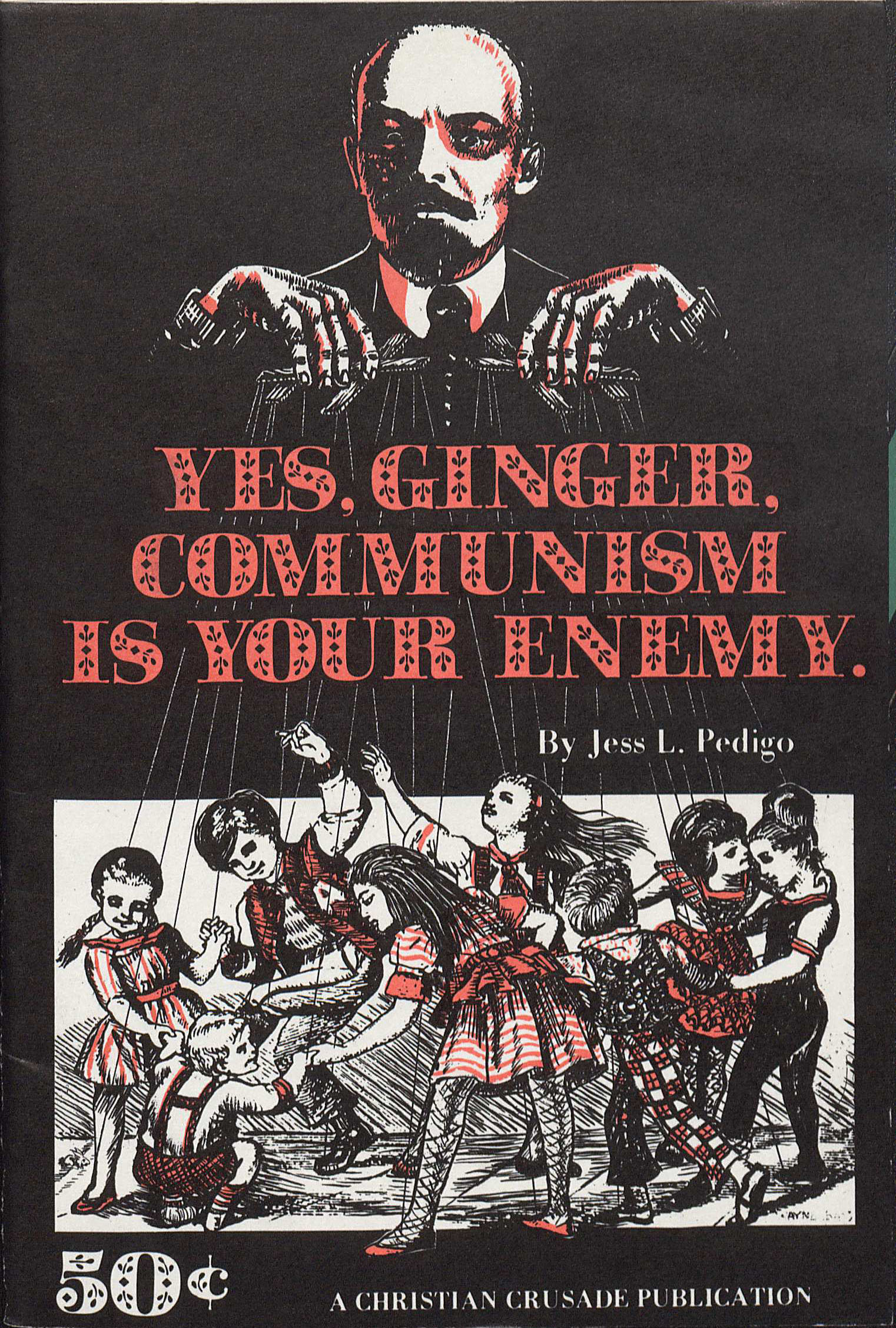 Pedigo, Jess L. Yes, Ginger. Communism Is Your Enemy. Tulsa: Christian Crusade Publications, 1970. (HX44 .P42 1972)
During the Cold War, many organizations in the United States, including Christian Crusades, published anti-communist literature. This specific booklet, directed at children, informs them of the supposed evils of communism and as per the title explains why communism is their enemy. This artifact is a prime example of religious, anti-communist propaganda which was prevalent during the cold war era.

3 thoughts on “Tales from Under Grounds II: War”