The following blog post is the second in a series of four, spotlighting the mini-exhibitions of students from fall semester’s USEM 1570: Researching History.  This is the abridged version of the students’ projects, featured at their outreach program, Tales from Under Grounds.

Ally Clement gives her classmates a “tour” of her mini-exhibition in preparation for Tales from Under Grounds. 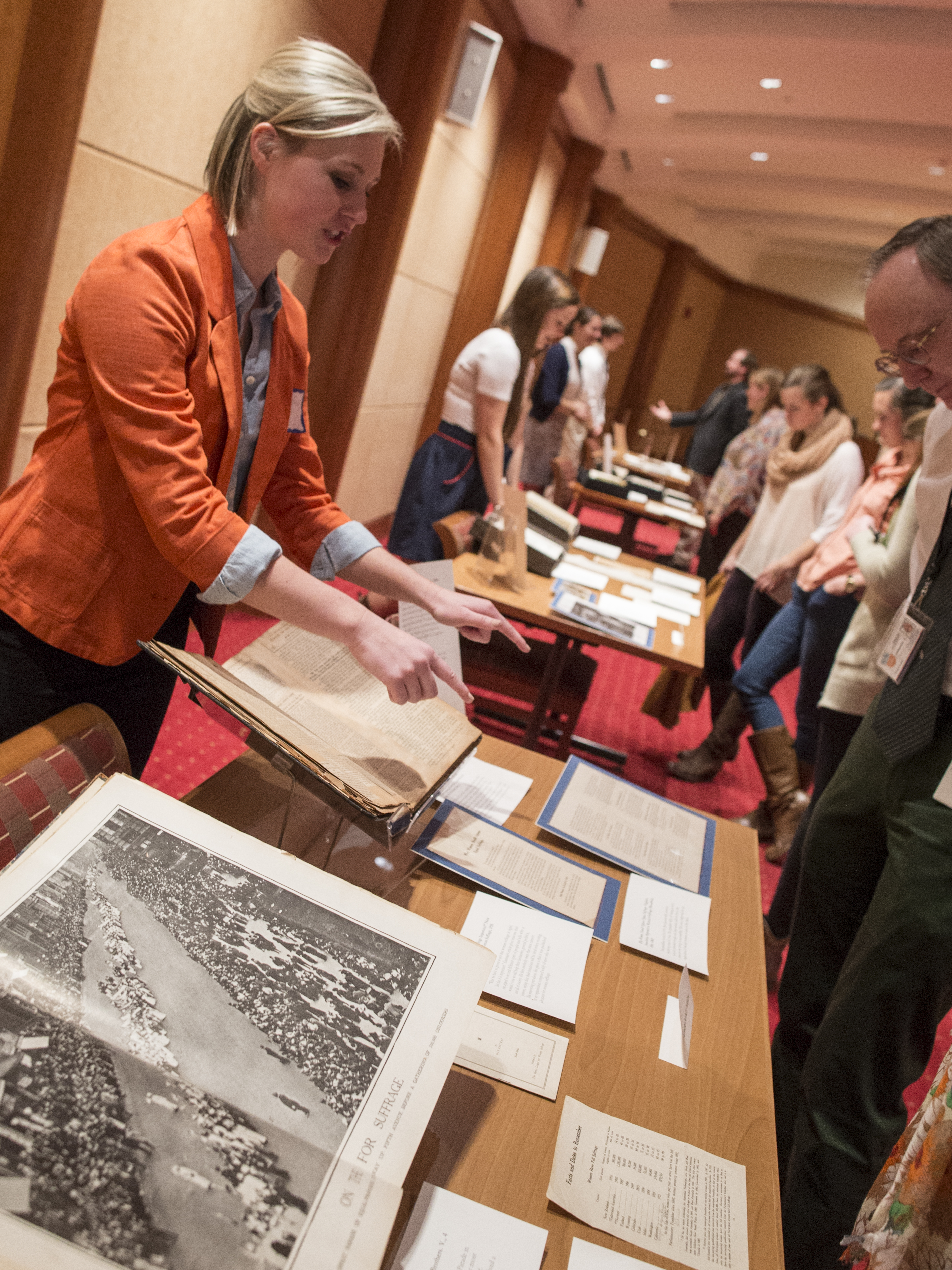 Ally Clement presenting her exhibit at the event, November 19, 2013. (Photograph by Sanjay Suchak)

Suffragettes made newspaper headlines throughout their fight and were the main topics of pamphlets distributed in the early 1900s. The fight for women’s suffrage did not cease until 1920 when the 19th amendment was passed and added to the U.S. Constitution. 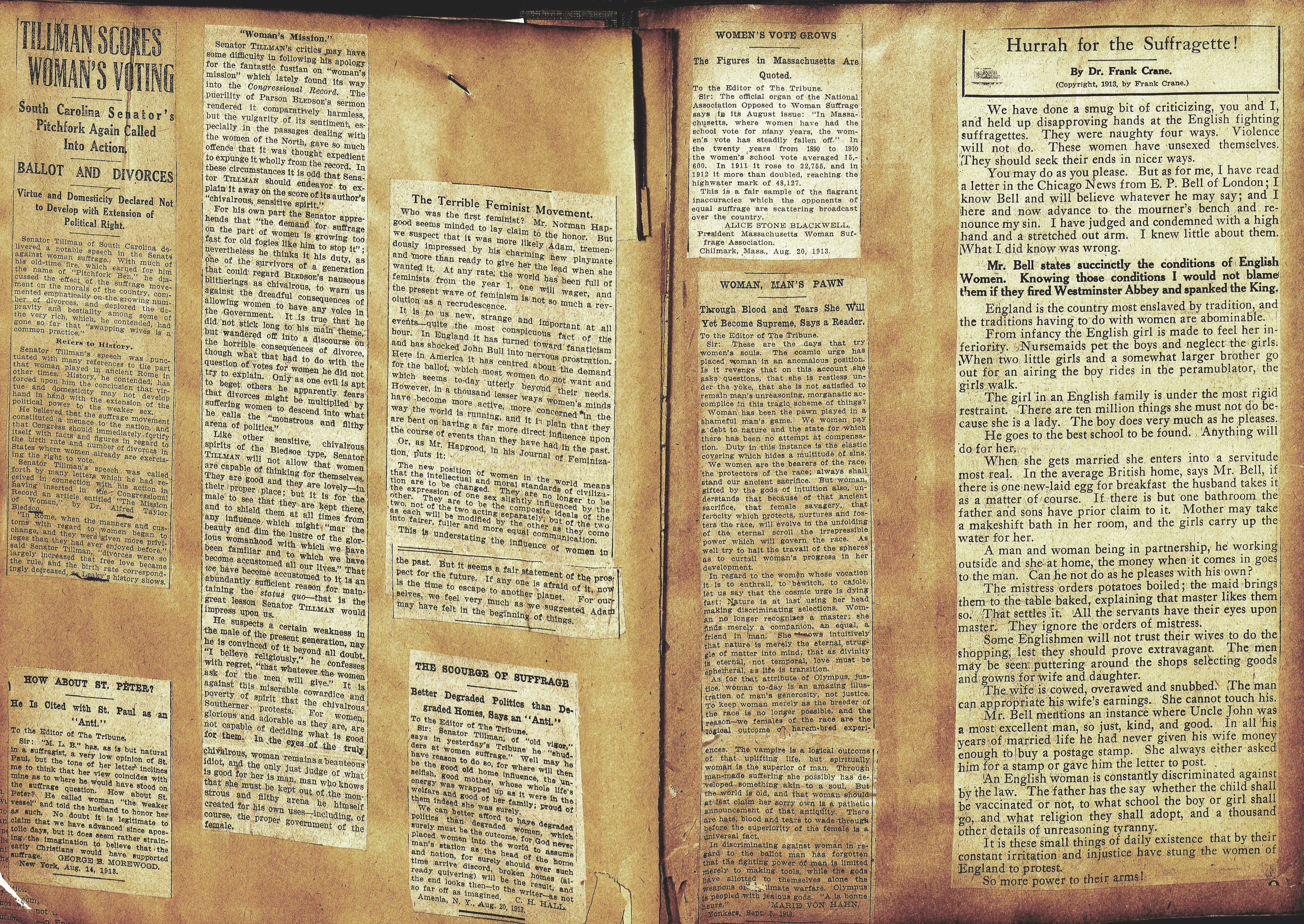 Scrapbook regarding World War I and Women’s Suffrage, 1913-1918. Emily Wayland Dinwiddie compiled this scrapbook, which includes history-making headlines from newspapers during the beginning of women’s suffrage to World War I. The headlines of this page are what are most important. They show many different views of how people (editors specifically) felt about women having the right to vote. Some headlines are exciting like “Hurrah for the Suffragette!” while others blame women’s suffrage on issues such as divorce or laziness. (MSS 3194-c. Image by Petrina Jackson) 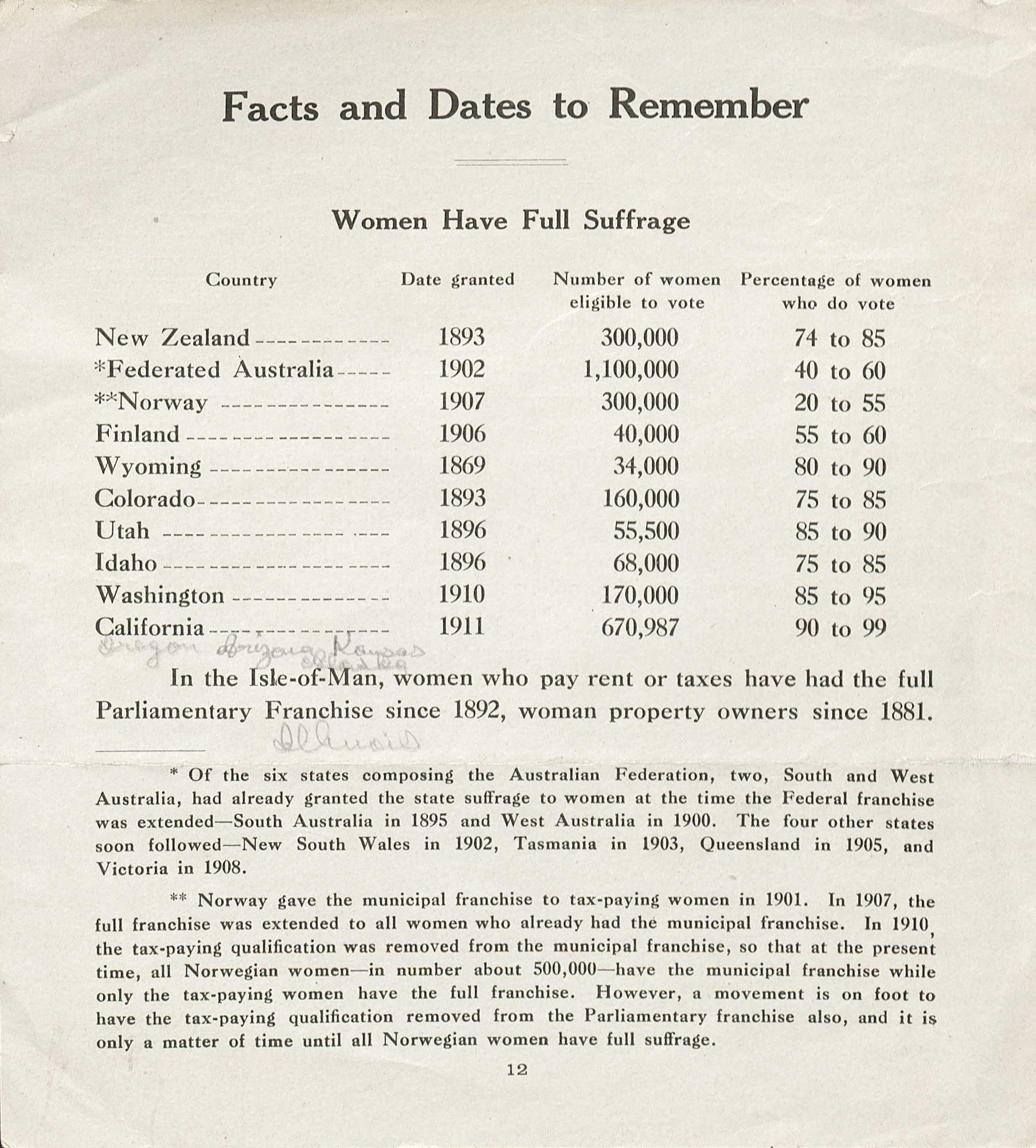 “Facts and Dates to Remember” (New York: National American Women’s Suffrage Association, 1911). Numerous informative and opposing pamphlets were issued during the time of women’s suffrage but this handout lists other countries and areas that have already allowed women the right to vote by 1911. The earliest suffrage right listed is Wyoming in 1869. It is important to remember that even though it was not legal to do so, some states already allowed women to vote. (Broadside 1911 .N28c. Image by Petrina Jackson) 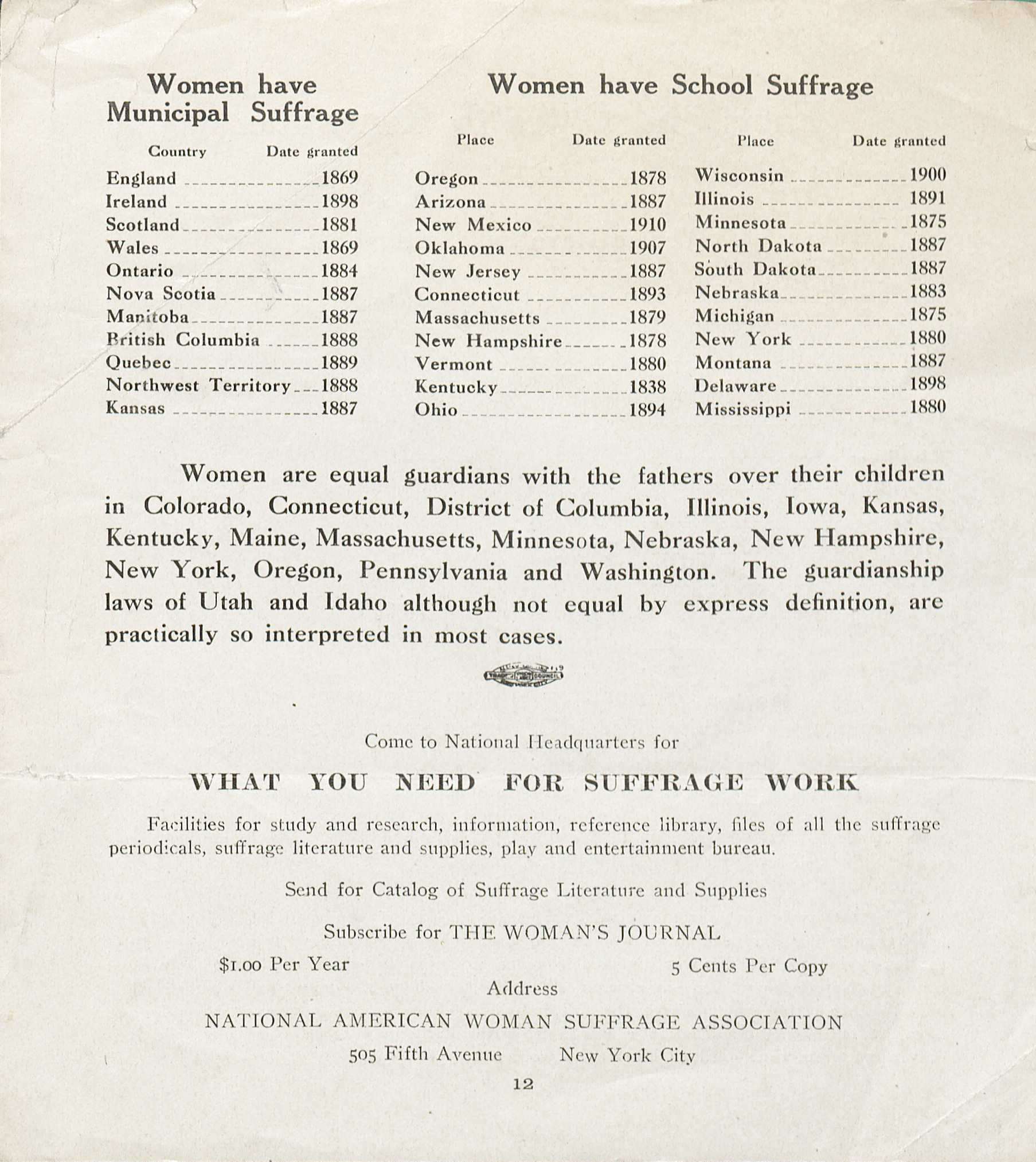 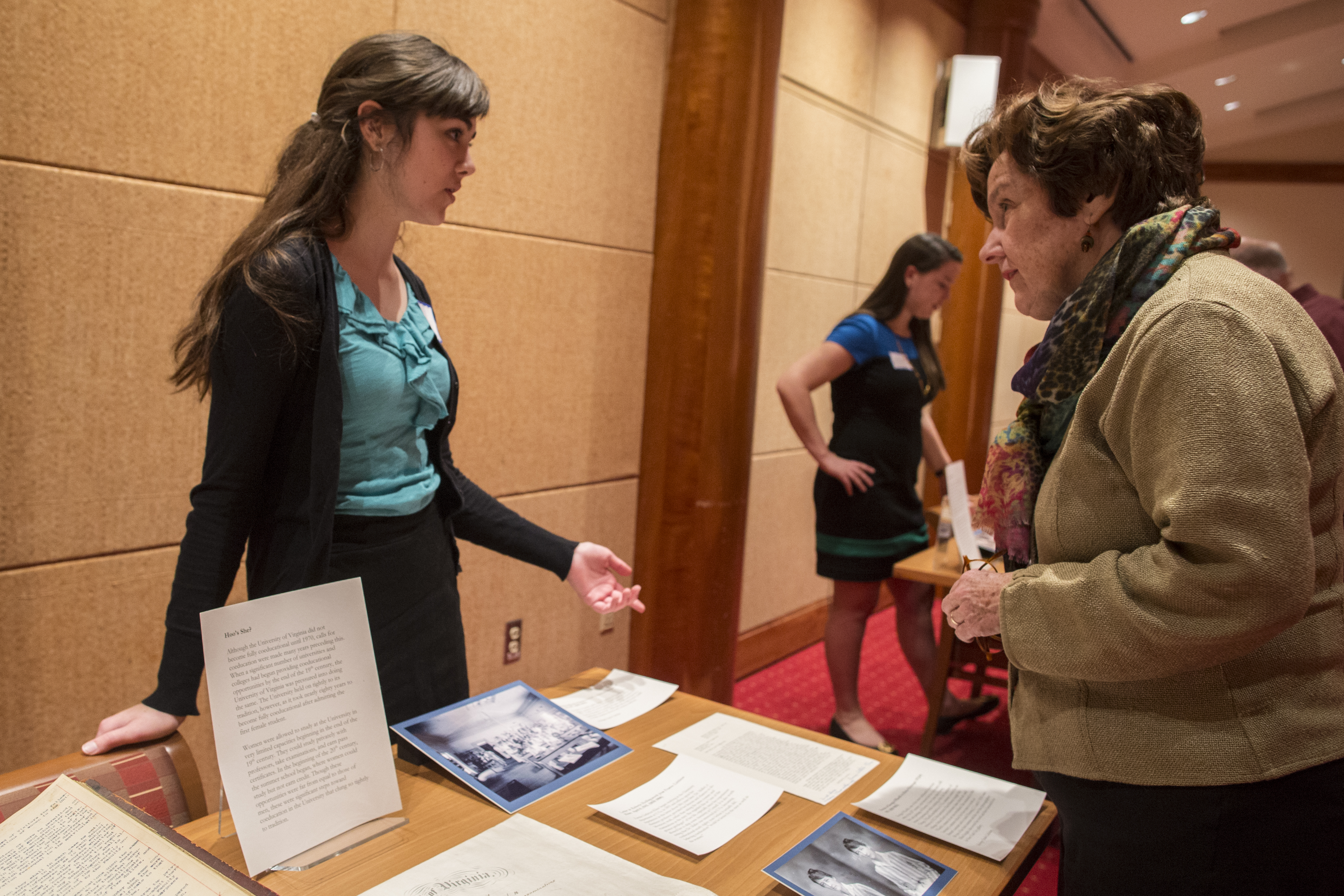 Women were allowed to study at the University in very limited capacities beginning in the end of the 19th century. They could study privately with professors, take examinations, and earn pass certificates. In the beginning of the 20th century, the summer school began, where women could study but not earn credit. Though these opportunities were far from equal to those of men, these were significant steps toward coeducation in the University that clung so tightly to tradition. 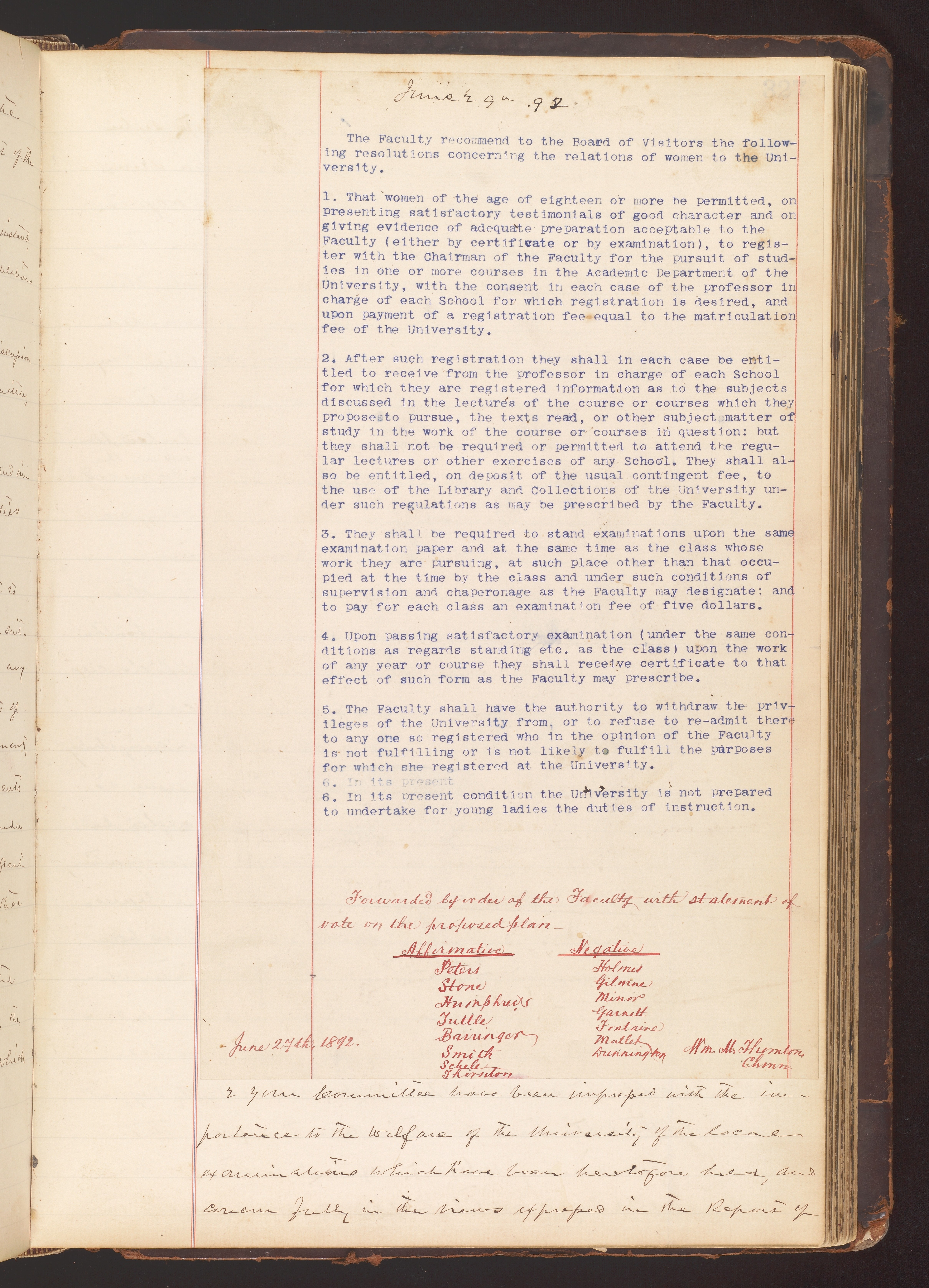 Minute Book of the Board of Visitors of the University of Virginia, 1892. Minutes of the Board of Visitors from June 1892 includes a resolution that was passed in response to Caroline Preston Davis’s request to take math exams. During this time many schools were becoming coeducational, and the resolution that passed was U.Va.’s way of dealing with this issue. With a registration fee and instructor permission, women of good character and preparation could study privately with a professor and take examinations for a specific class in which men were enrolled. However, they were not allowed to attend lectures and received pass certificates instead of diplomas. Though this was a step toward better education for women, U.Va. still held onto tradition, considering itself unprepared to take on the “duties of instruction” for young women at this time. (RG-1/1/1.382. Image by Digitization Services) 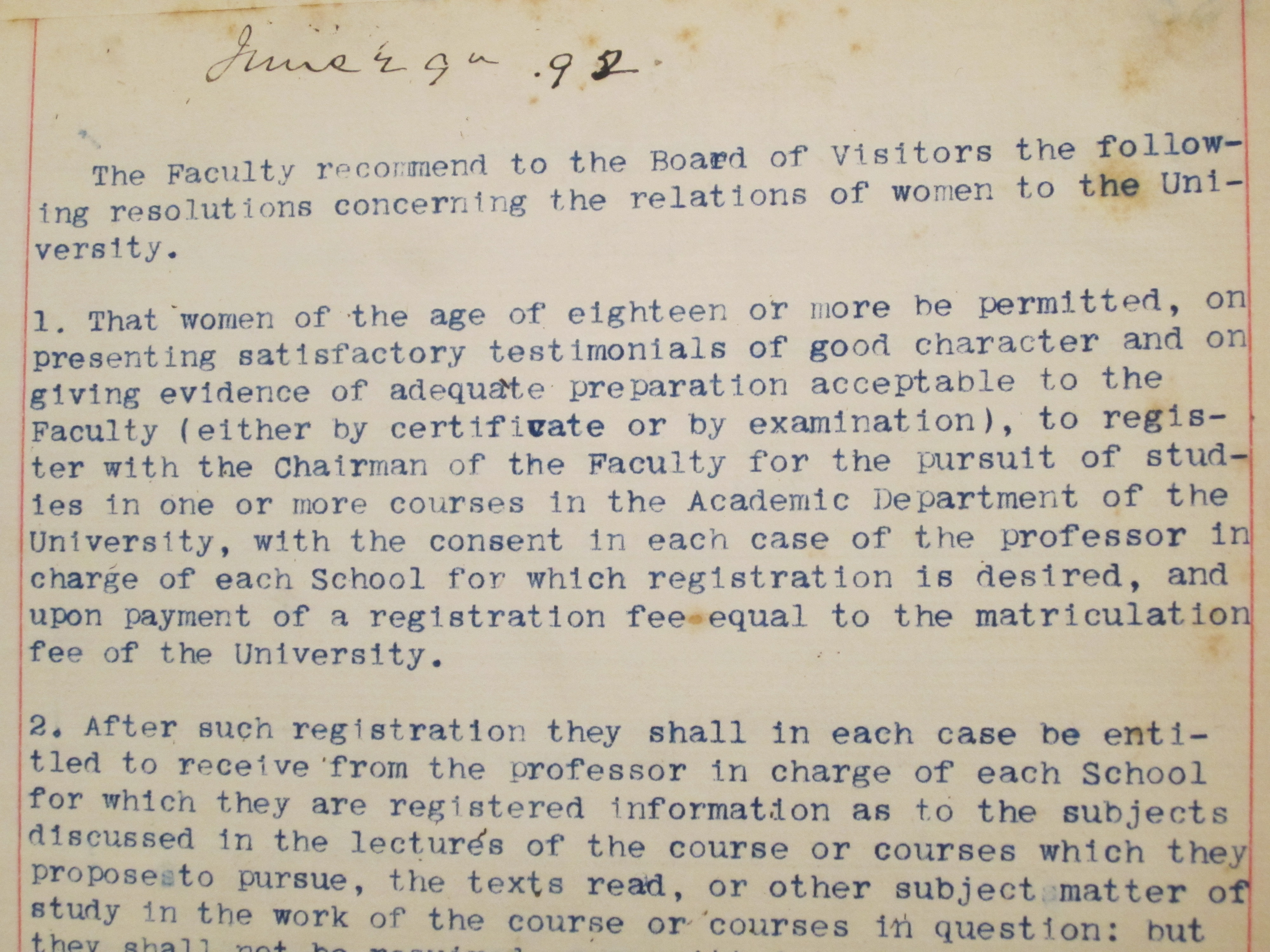 Detail of the June 1892 entry of the Board of Visitor’s Minute Book, regarding women at the University. (RG-1/1/1.382. Photograph by Petrina Jackson) 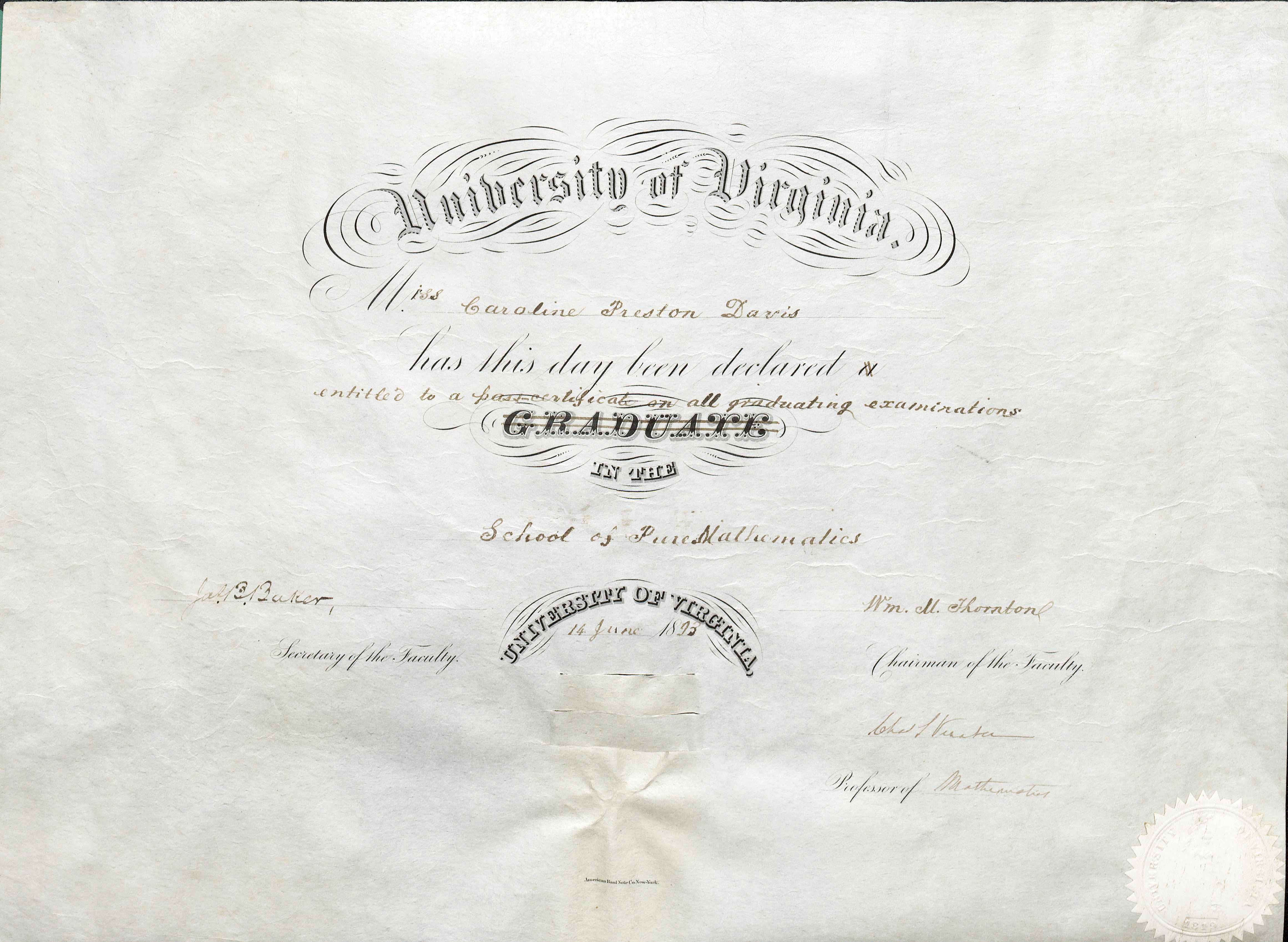 Pass Certificate of Caroline Preston Davis. June 14, 1893. After the Board of Visitors passed the resolution about women studying at U.Va., in 1892, Caroline Preston Davis became the first female student and the first woman to have her studies recognized at U.Va. By taking the same mathematics examinations as men (and doing quite well on them), she earned this pass certificate in lieu of diploma. The paper on which this certificate was printed was the same as diploma paper, but parts of the diploma were marked out. Note that “Mr.” was changed into “Miss” and “a graduate” became “entitled to a pass-certificate on all graduating examinations in the School of Pure Mathematics.” This certificate shows how women were simultaneously close to and far from the educational opportunities that men had. (MSS 4951. Image by Petrina Jackson) 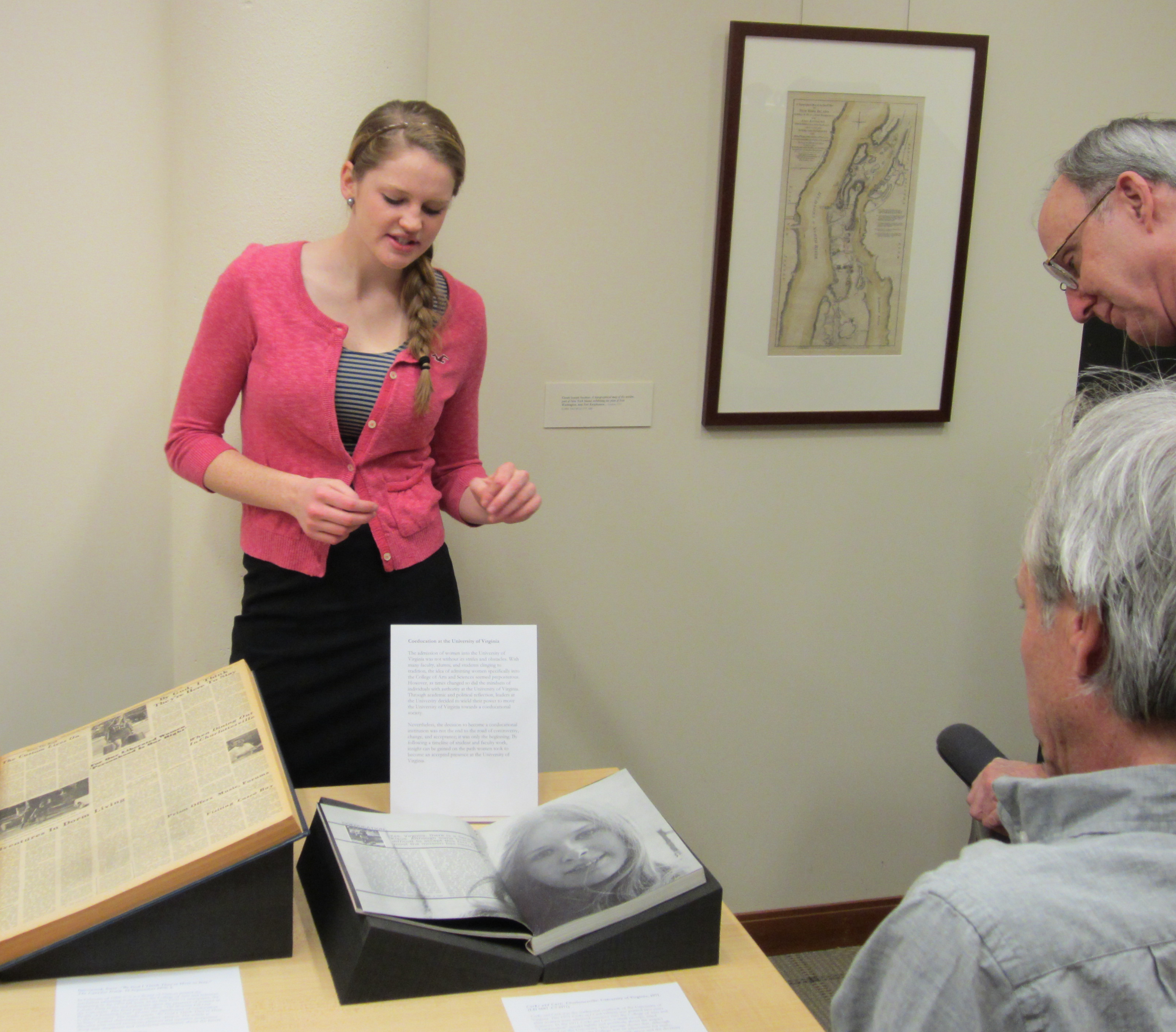 Coeducation at the University of Virginia

Nevertheless, the decision to become a coeducational institution was not the end to the road of controversy, change, and acceptance; it was only the beginning. By following a timeline of student and faculty work, we can gain insight into the path women took to become an accepted presence at the University of Virginia. 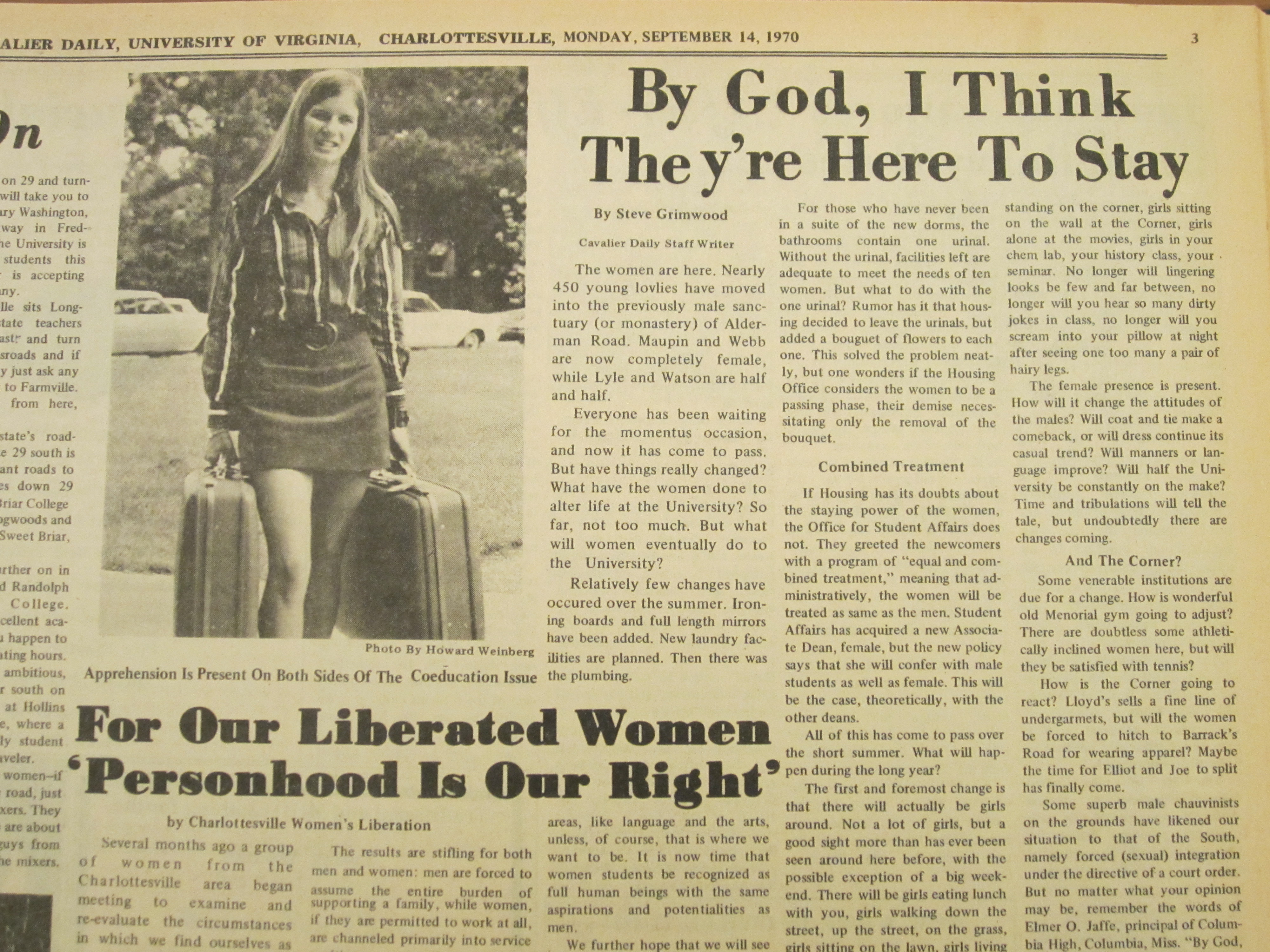 Grimwood, Steve. “By God I Think They’re Here to Stay.” The Cavalier Daily. 14 September 1970: 3. In February of 1969, U.V.a.’s Board of Visitors passed the resolution admitting women into the College of Arts and Sciences beginning in the 1970 fall term. In its first 1970-71 newspaper, the Cavalier Daily notes and elaborates upon the presence of women at the University. The front page headline “350 Women Fill Out Profile of Entering Class” proves the significance of coeducation to the University. The inside article “By God I Think They’re Here to Stay,” further elaborates on student opinion. The article is flavored with mixed emotions; pleasure and tentative acceptance along with skepticism and underlying uncertainty about the future. (Photograph by Petrina Jackson) 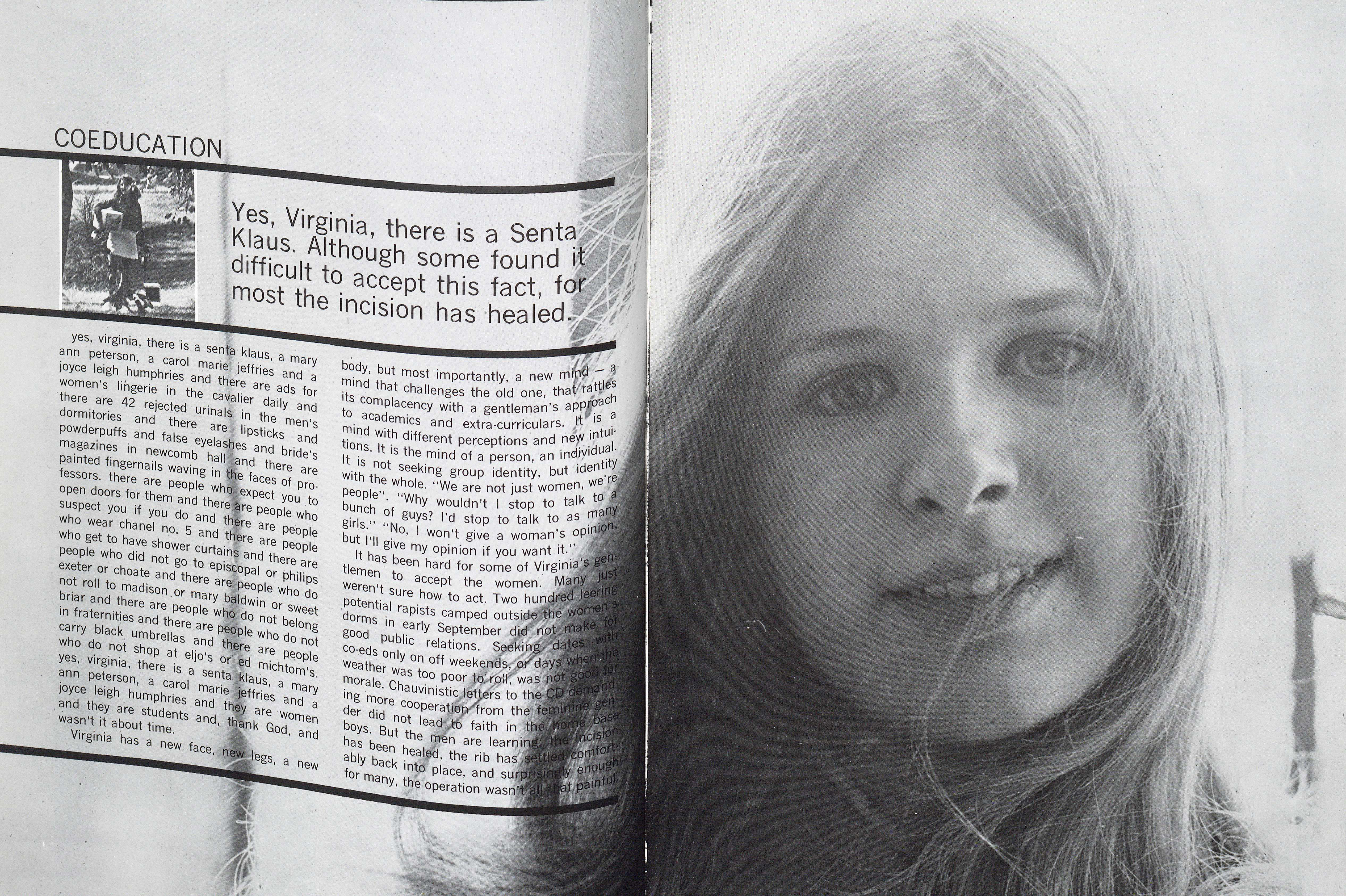 “Coeducation.” Corks and Curls. Charlottesville: University of Virginia, 1971. Corks and Curls was the yearbook of the University of Virginia. The 1971 Corks and Curls edition was printed two years after women were admitted entrance into the College of Arts and Sciences. In the 1971 Corks and Curls, a small excerpt, titled “Coeducation” speaks lightly and positively about the impact of women on the University. This passage shows that, although admitting women into the College was an adjustment for many, ultimately the change should be accepted with grace and the diversity women offer, gratefully accepted. (LD 5687 .C7.1971. Image by Petrina Jackson) 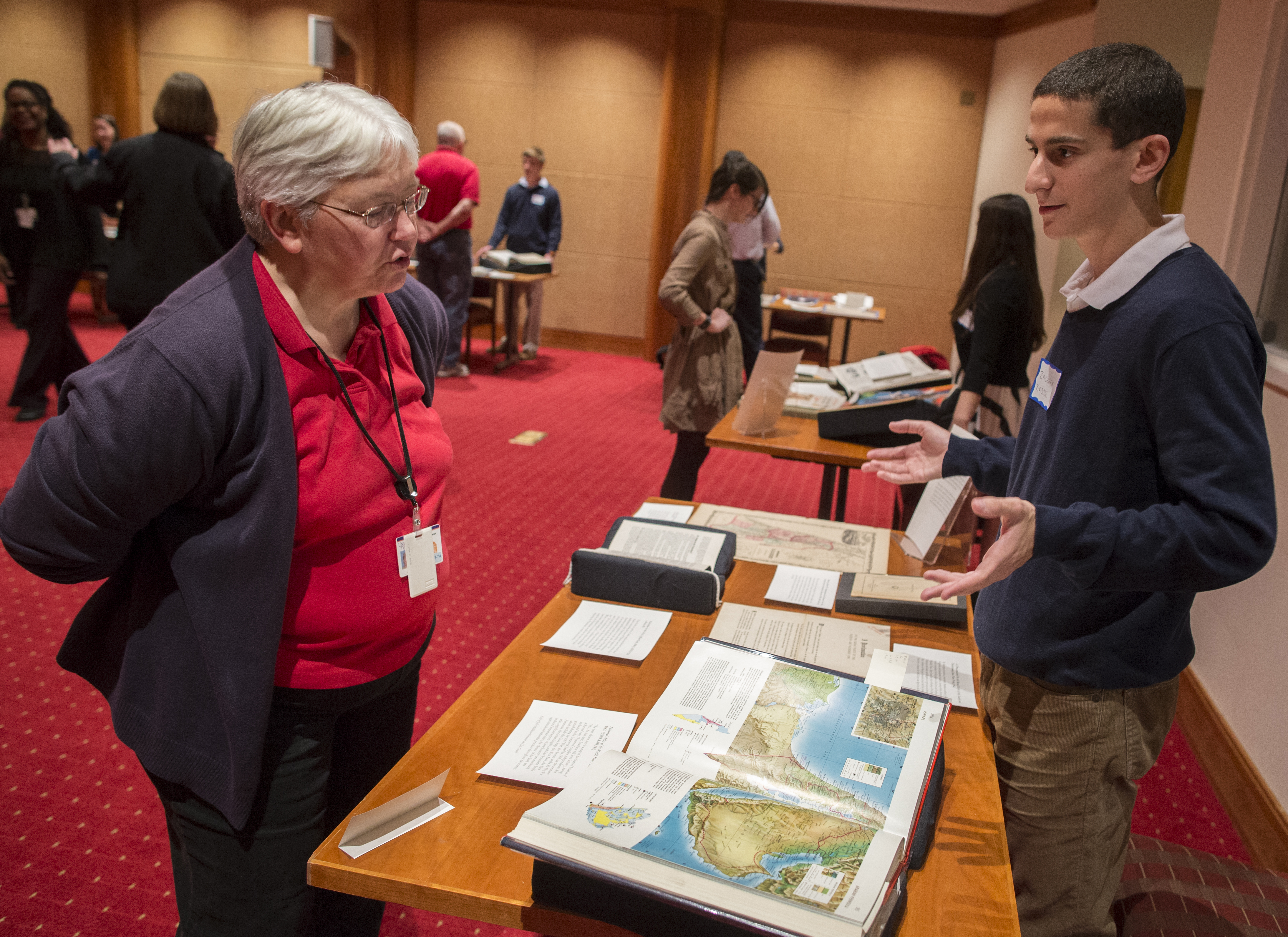 The Journey to 1948: An American Perspective

Most studies of the relationship between the Jewish and the Arab communities in Palestine and the situation that ensued in 1948 are focused on the two groups themselves and the British involvement. This exhibit’s purpose is to show that these entities were not alone in the conflict; the world’s rising superpower, the United States, closely monitored the situation and in turn had a significant impact on the outcome.

Through publications in American periodicals, pamphlets, and proclamations on the subject, one is able to determine that without American influence, it is possible the Jewish-Arab conflict in Palestine would not have resulted in the creation of the State of Israel. 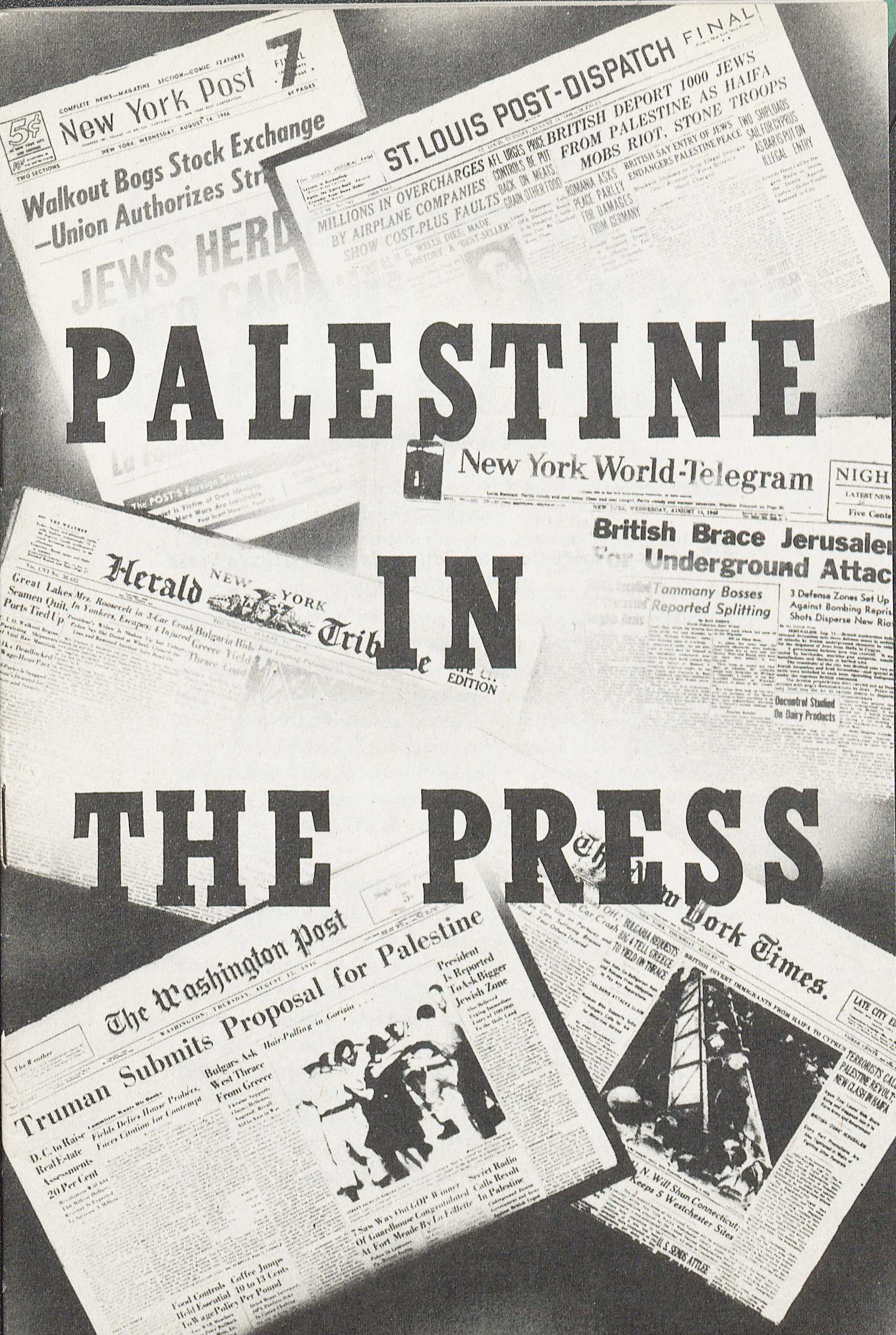 “Palestine In the Press” [New York, 1946.]. This book is a series of news articles published in the United States concerning the issue of Palestine and the creation of an independent state. From these articles, it appears that American public opinion is on the side of the establishment of an independent Jewish state in the land of Palestine. Many of the articles criticize the British’s handling of the situation and even go as far as to state that the actions of the British are “all too reminiscent of… a Nazi concentration camp.” What is currently displayed is a political cartoon, in which the cartoonist appears to be stating that without the British support, the Palestinians would lose the state to the Jews, depicting the Palestinians as weak and defenseless. (D743.9 .C65 v.4 no.15. Image by Petrina Jackson) 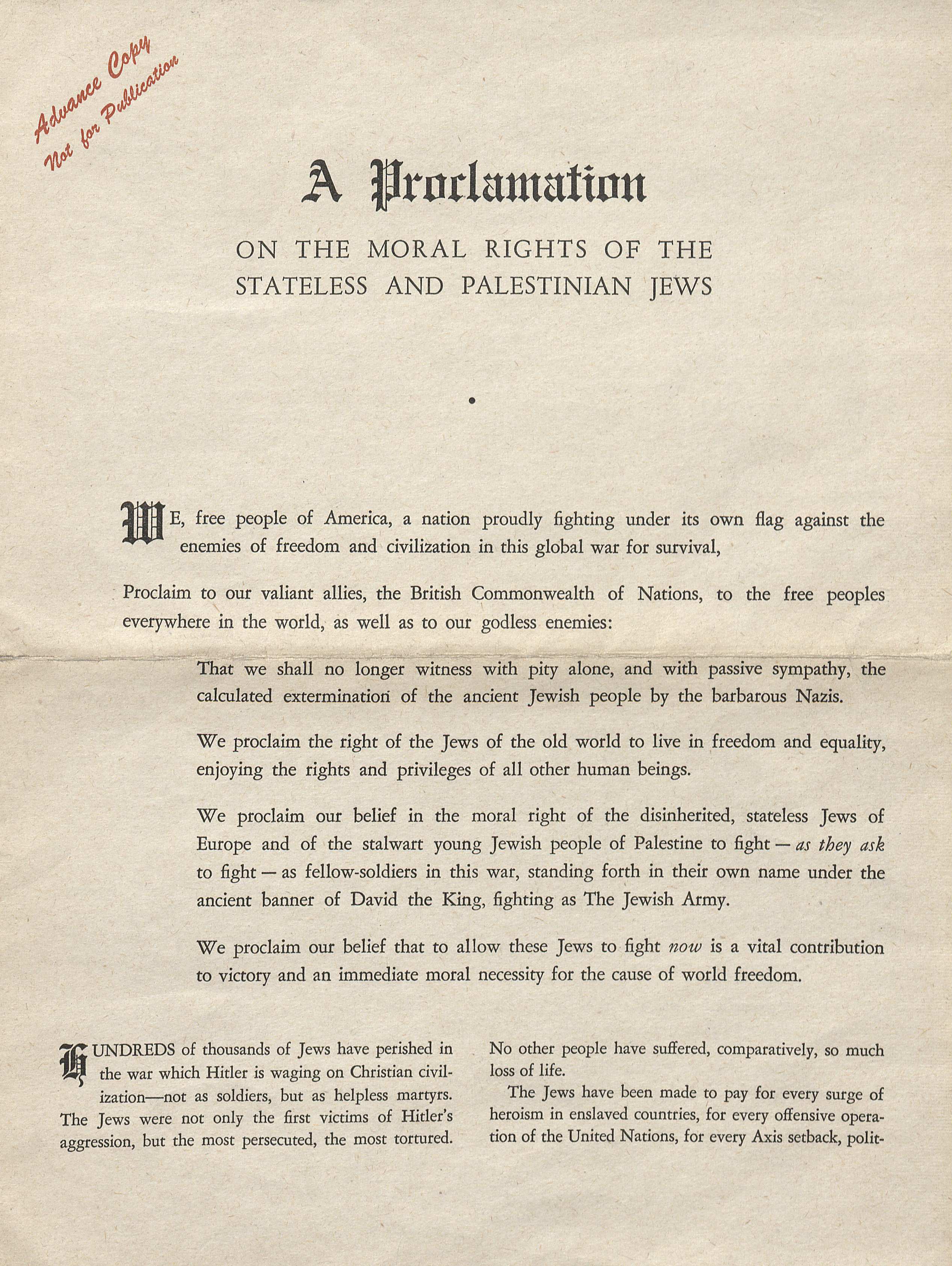 “A Proclamation On the Moral Rights of the Stateless and Palestinian Jews” (New York, 1942). In this proclamation, numerous American military, political, religious, and academic leaders, among others, have expressed their sympathy for the plight of the Jews in Europe and in the Middle East. After detailing the suffering of the Jews in Europe and their unwillingness to give up on their people, the writers of this proclamation state that the Jewish people deserve a nation for which they can fight for and be a part of. (Broadside 1942.P76. Image by Petrina Jackson)

2 thoughts on “Tales from Under Grounds: Women’s Suffrage, Coeducation, and Israeli Statehood”