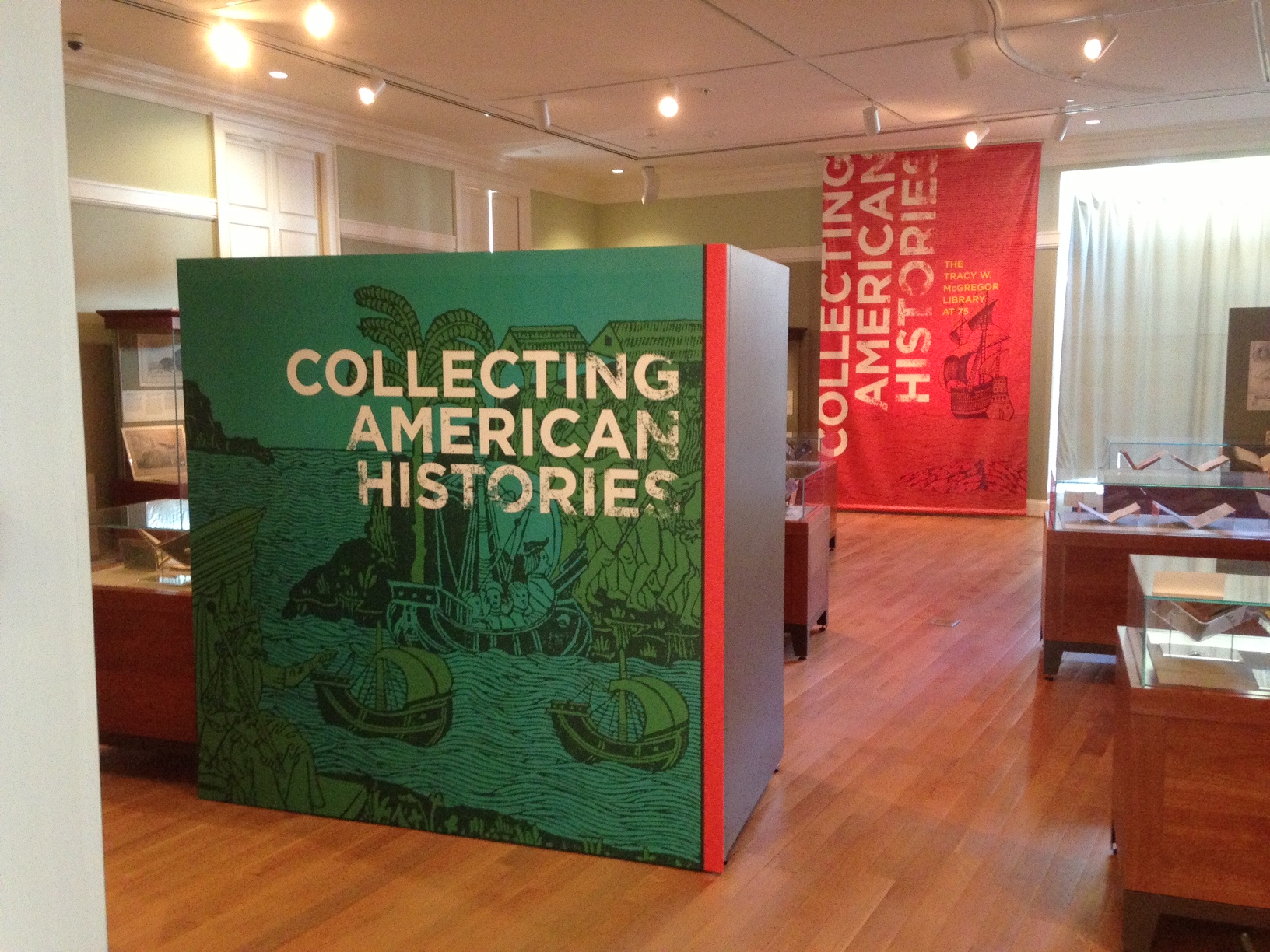 Seventy five years ago, on June 13, 1938, the University of Virginia Library announced its greatest single gift up to that time: the magnificent 12,500-volume library formed by Detroit philanthropist Tracy W. McGregor. Presented by the McGregor Fund, the Tracy W. McGregor Library of American History instantly elevated the U. Va. Library to the top rank of the nation’s great research libraries. The McGregor Fund generously financed construction of the elegant McGregor Room on the second floor of Alderman Library to serve as the collection’s new home. On what would have been Tracy McGregor’s 70th birthday—April 14, 1939—the McGregor Room was formally dedicated. 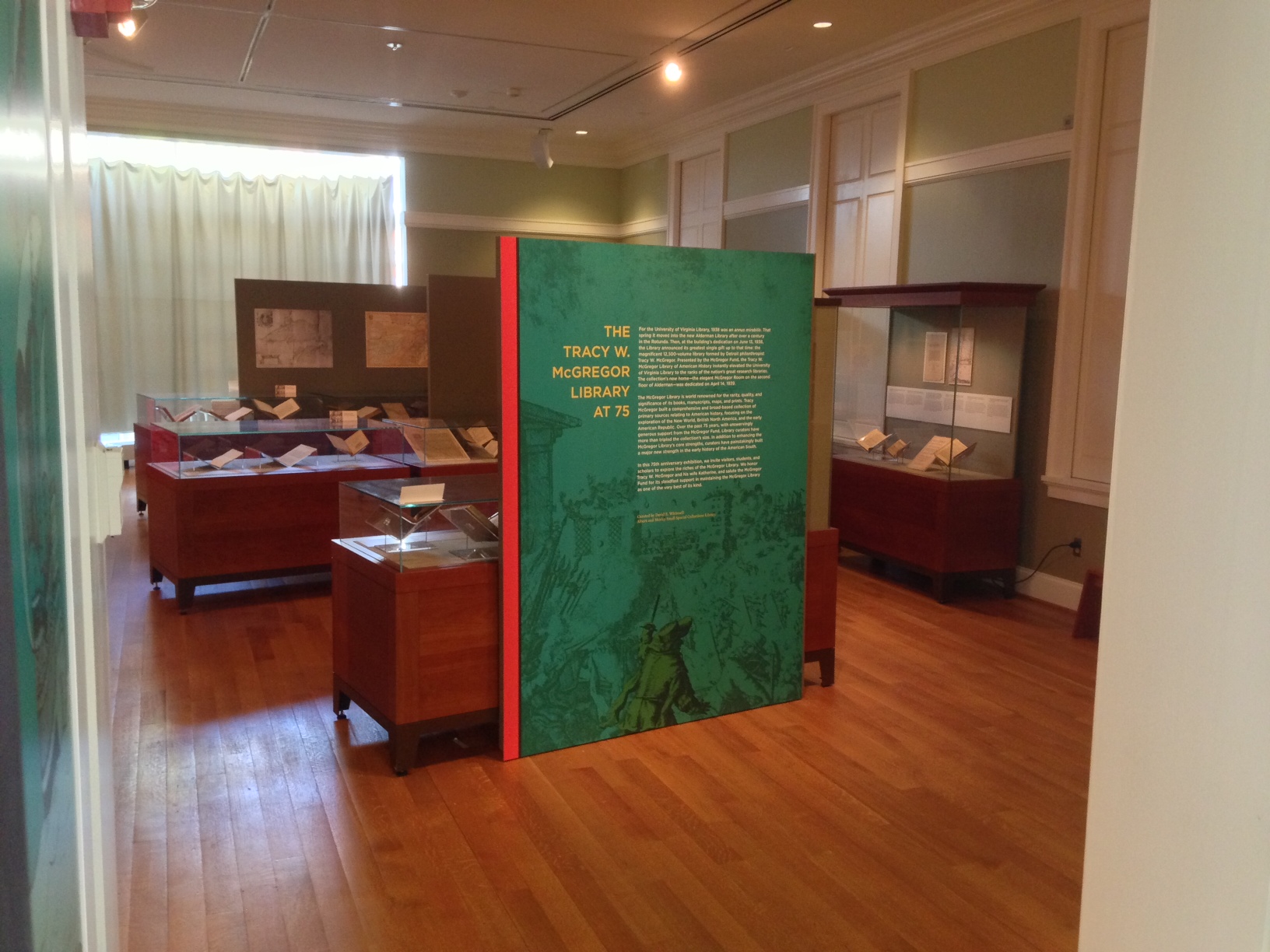 In celebration of the McGregor gift, and to mark its successful 75-year partnership with the McGregor Fund to care for and enlarge the collection, the U. Va. Library has opened a major new exhibition, Collecting American Histories: The Tracy W. McGregor Library at 75. On display until July 2014 in the main floor gallery of the Harrison Institute and Small Special Collections Library, Collecting American Histories features over 125 rare books, broadsides, manuscripts, maps, and prints from the McGregor Library. 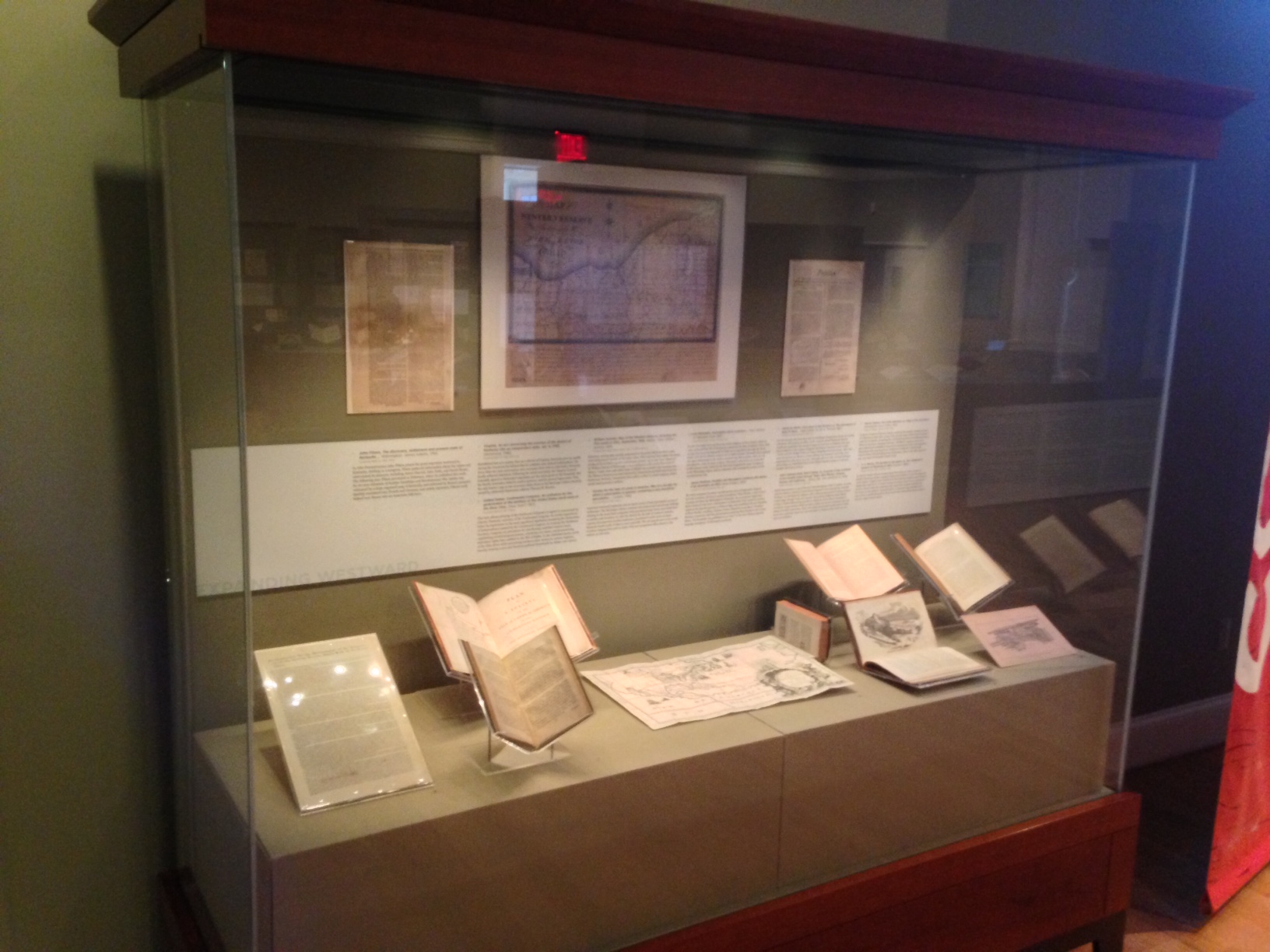 “Expanding Westward,” one of the stories explicated in Collecting American Histories.

Tracy McGregor built a comprehensive and broad-based collection of primary sources relating to American history, with emphases on the exploration of the New World, British North America, and the early American Republic. Over the past 75 years, with unswervingly generous support from the McGregor Fund, Library curators have more than tripled the collection’s size, adding a major new strength in the early history of the American South. Today the McGregor Library is world renowned for the rarity, quality, and significance of its holdings. 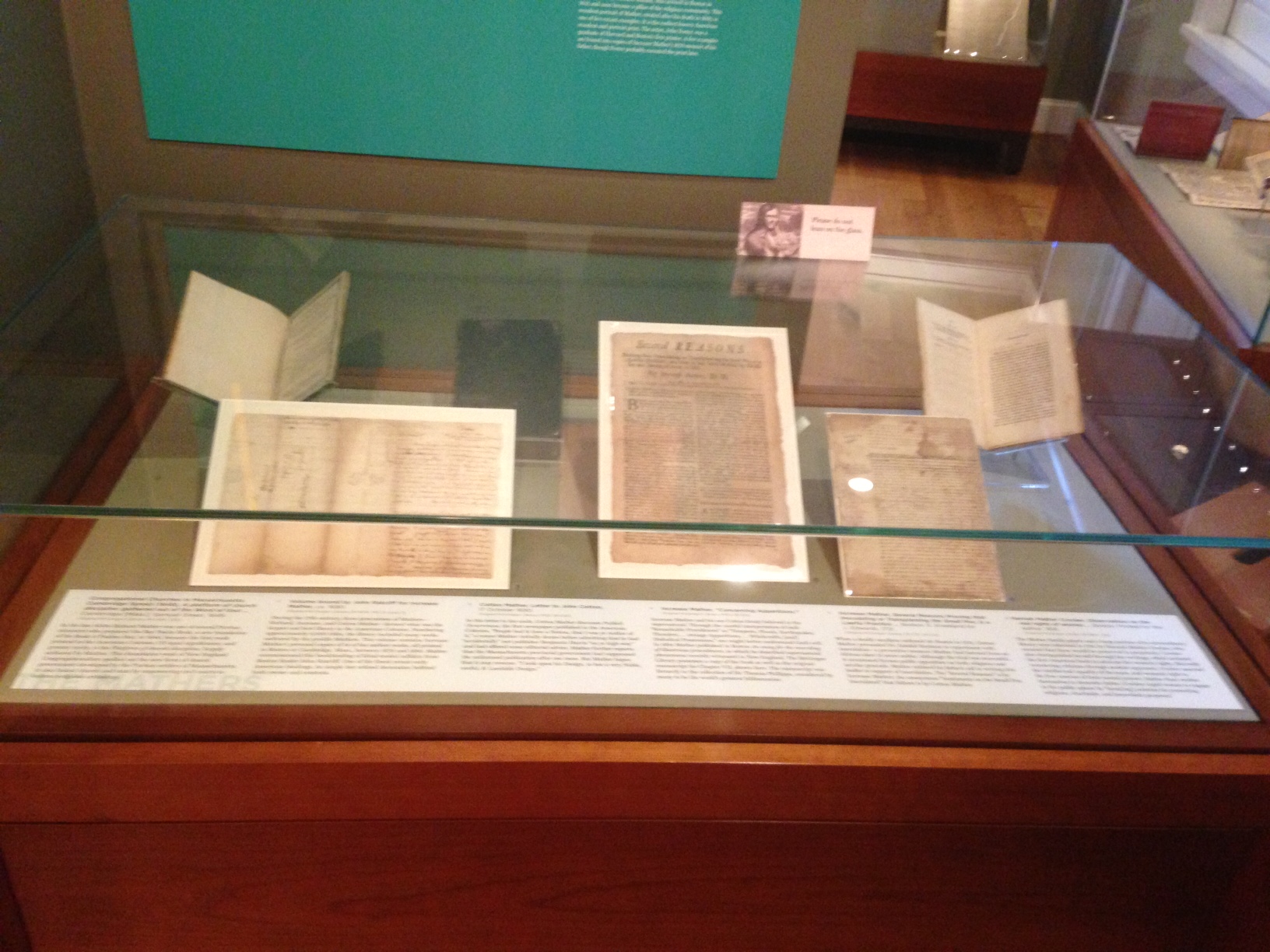 The genius of the McGregor Library is that it documents a multiplicity of histories and not simply a single national narrative. McGregor and the Library’s curators endeavored to build a collection that is neither too broad and lacking in focus, nor too narrow and distorted in viewpoint. Primary sources have been acquired not only for their rarity and significance, but also for their utility in revealing new facets of the American experience. 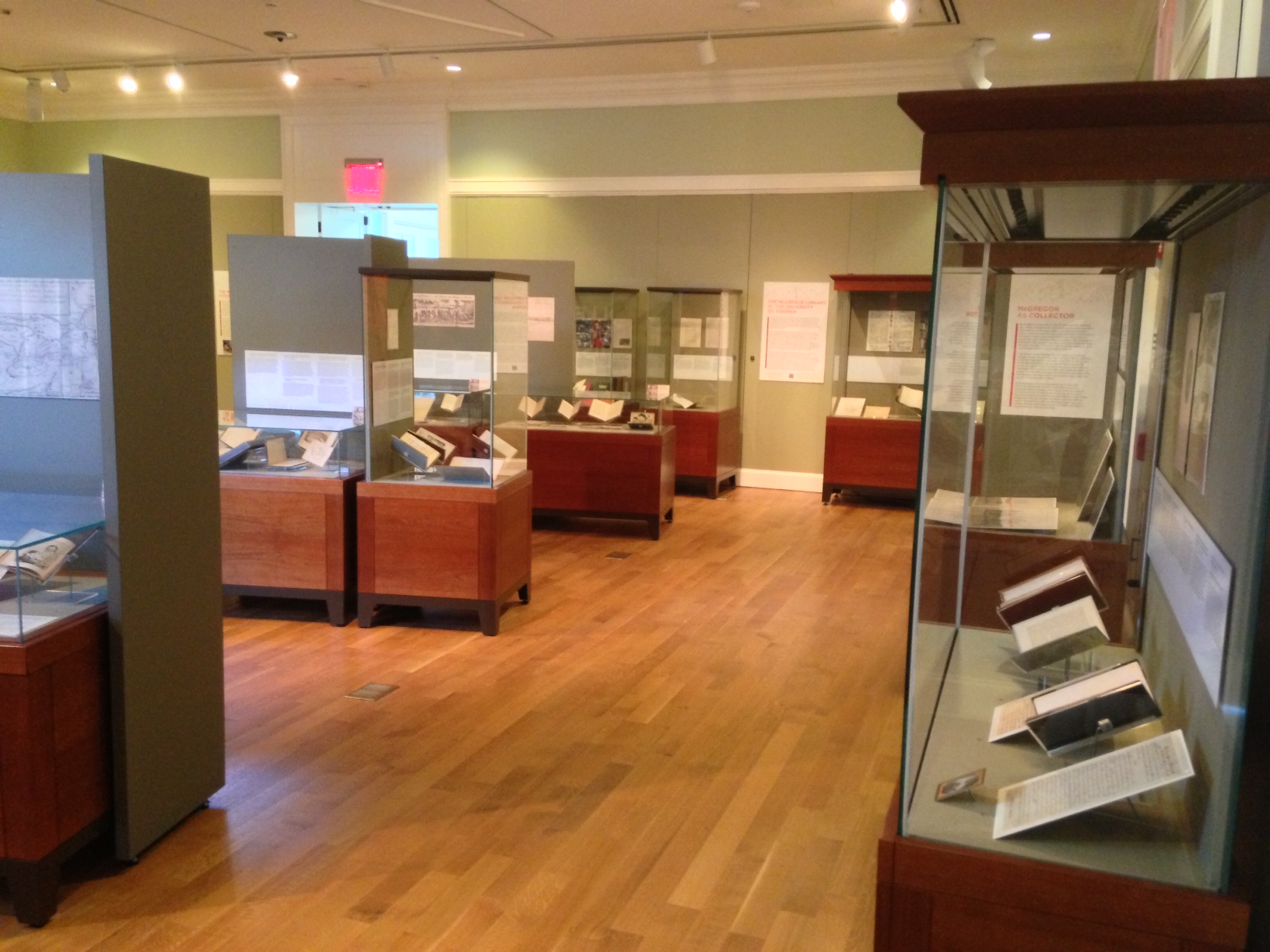 Collecting American Histories features a range of items selected for the diversity of stories they tell about our nation’s past. Some are famous rarities, while others are less well known and have yet to receive the attention they deserve. Some form part of the original library formed by Tracy McGregor, while others have been acquired as recently as this year. Some offer welcome insights into the past, while others are uncomfortable reminders of more challenging aspects of our nation’s history. The stories told range from the early settlement of Virginia to the Mather family of Puritan ministers; to the clash of Britain, France, and Spain over the North American continent; to the diaspora of Native Americans from their ancestral lands; to the servants and slaves on whose backs the American economy depended; to the boundaries of social order and disorder; and to the impressions of America recorded by visitors from abroad. 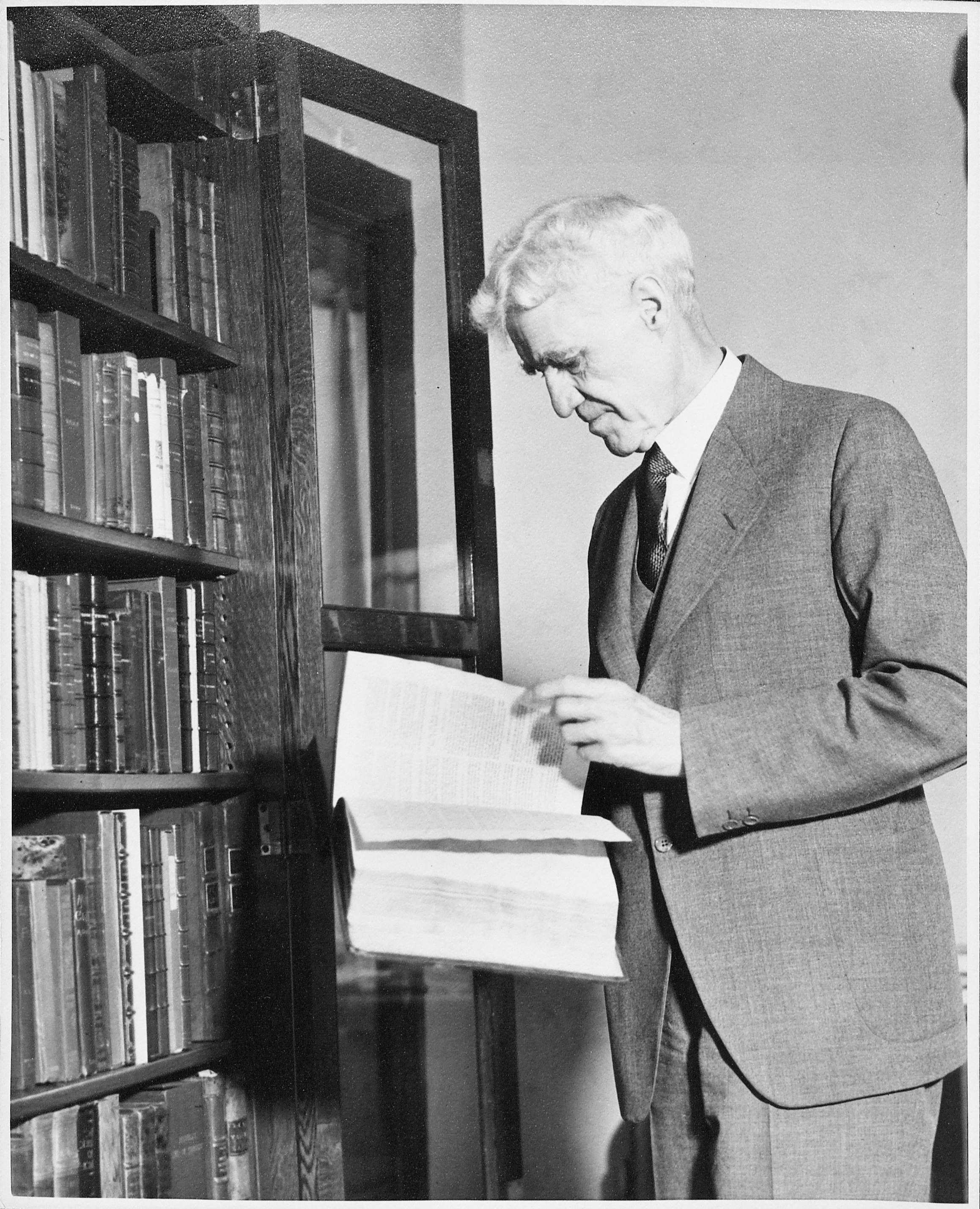 Tracy W. McGregor inspecting a book from his library.

Collecting American Histories also relates the fascinating story of Tracy McGregor and his wife Katherine Whitney McGregor. Born in 1869 in Sandusky, Ohio, McGregor left college in 1891 in order to run his late father’s pioneering homeless missions in Toledo and Detroit. Tracy married Katherine, one of Detroit’s wealthiest heiresses, in 1901. Together they devoted most of their fortune to significantly improving the lives of residents in the rapidly growing and industrializing “Motor City.” In 1925, following a tour of the William L. Clements Library at the University of Michigan, McGregor resolved to form a collection of rare books and manuscripts pertaining to America’s early history. He built his extraordinary library over a single decade, with the express intention of donating it to a deserving institution. Today the McGregor Fund remains a mainstay of Michigan philanthropy, dispersing over $7 million a year in grants. 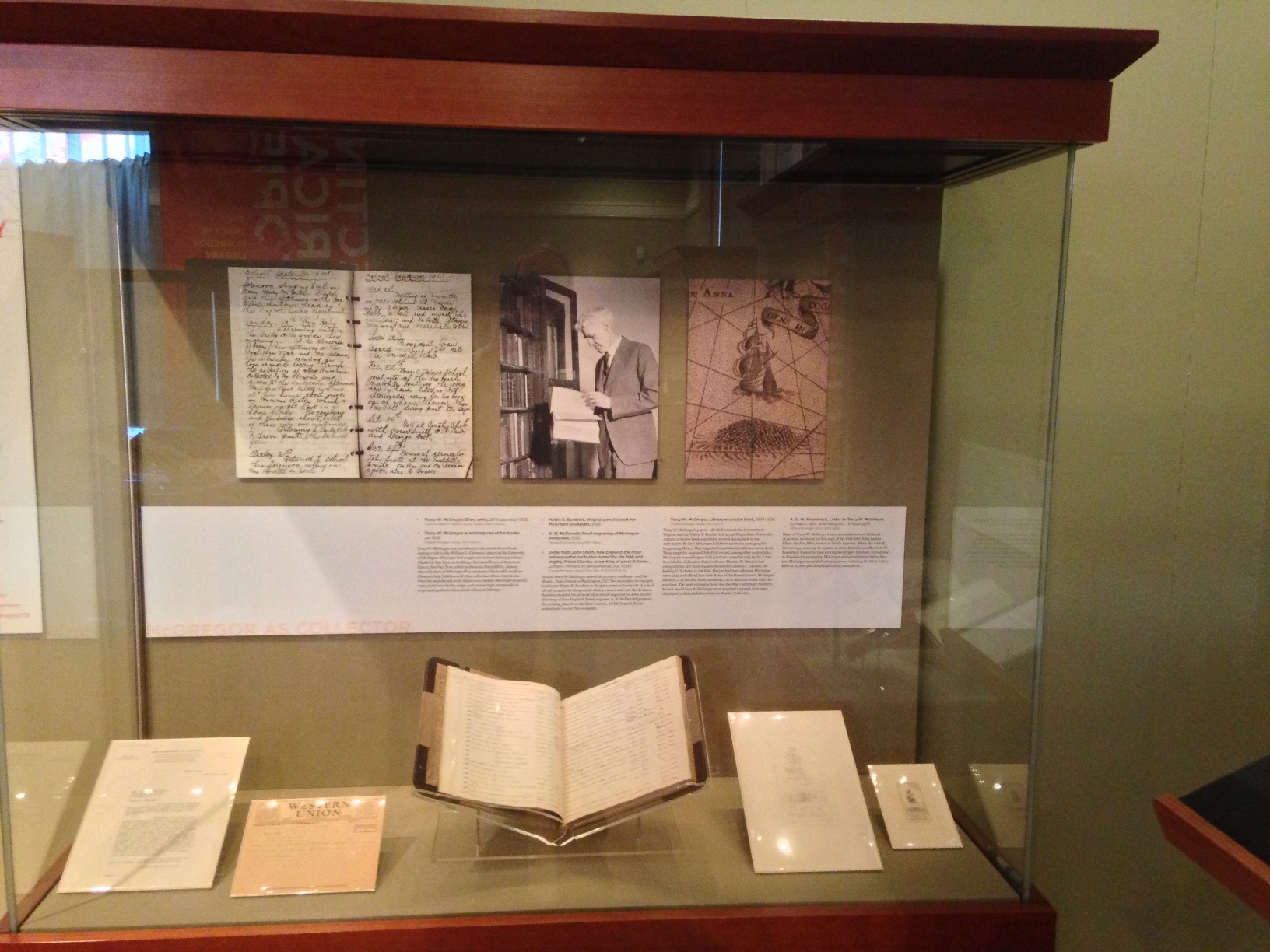 The story of how Tracy McGregor formed his magnificent library in little more than a decade is told in this case.

It has been my privilege to curate the exhibition, and I invite you to come view Collecting American Histories. Those who cannot visit in person will soon be able to browse the exhibition virtually—watch this blog for a link to the online exhibition.