Recently, I had the pleasure of facilitating a workshop on preserving historical records at the 2013 Fall State Meeting of Virginia – Delta Sigma Theta Sorority, Inc (DST).  The sorority, which was founded at Howard University, celebrates its centenary this year.

Each chapter is charged with collecting and maintaining its historical records: its charter, photographs, programs, news clippings, etc.  The purpose of my presentation was to give them direction in doing just that, but moreover to share with them the importance of working with local libraries or archives who specialize in keeping such rich historical materials secure, safe, and accessible for the long run. 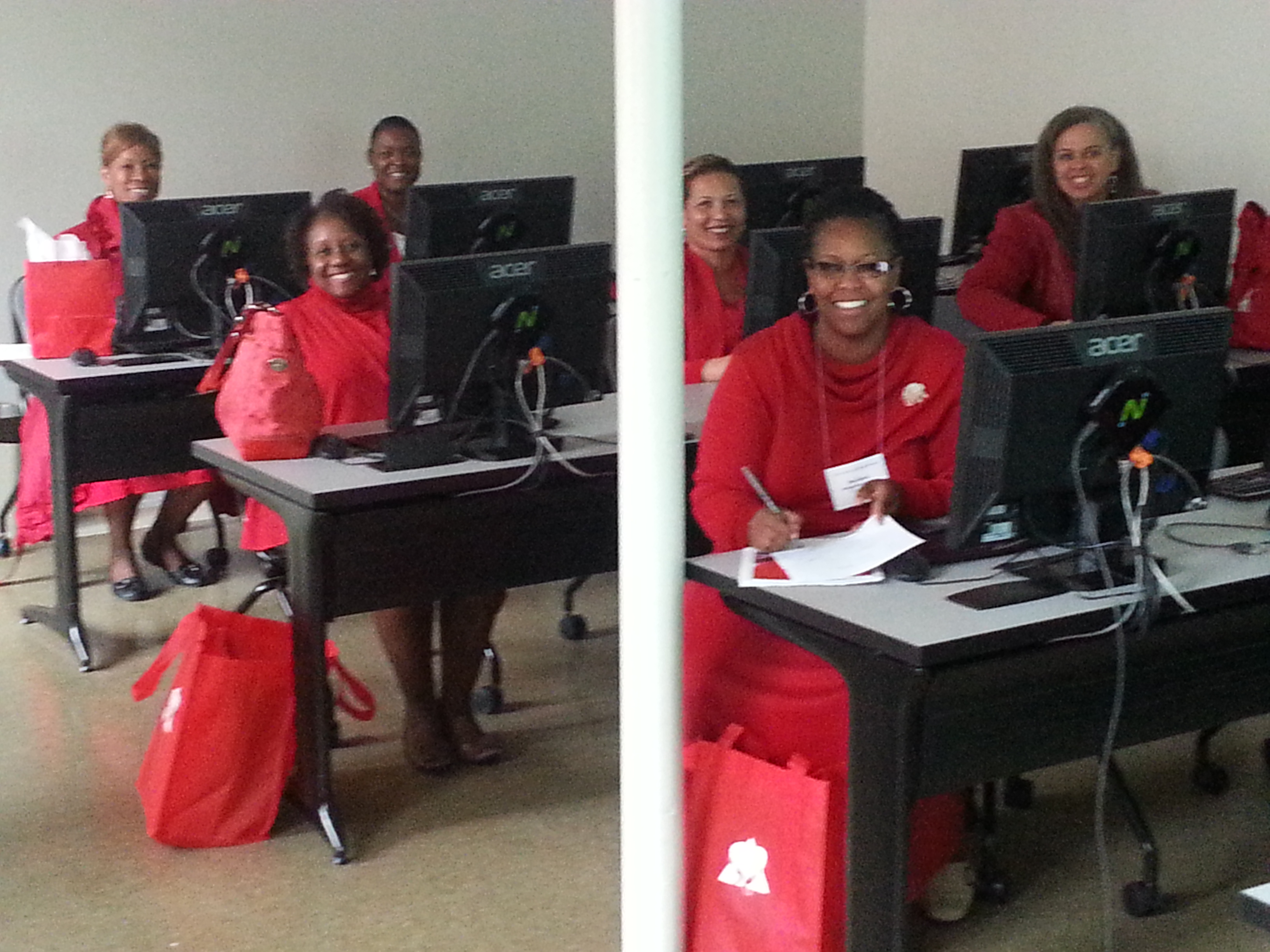 Some of the attendees at the Preserving the Legacy workshop, October 2013. The workshop was held at the Jefferson School City Center in Charlottesville. (Photograph by Petrina Jackson)

At the University of Virginia, we are committed to collecting personal and organizational records of African Americans.  We do not have a DST collection, but we do have materials in other collections that feature the sorority.  For instance, the Records of the Office of the Dean of Students document the relationship among fraternities, sororities, and the University.  It is in these records that you find correspondence from sorority presidents, event documentation, disciplinary records and more.  Sometimes, you find real treasures. 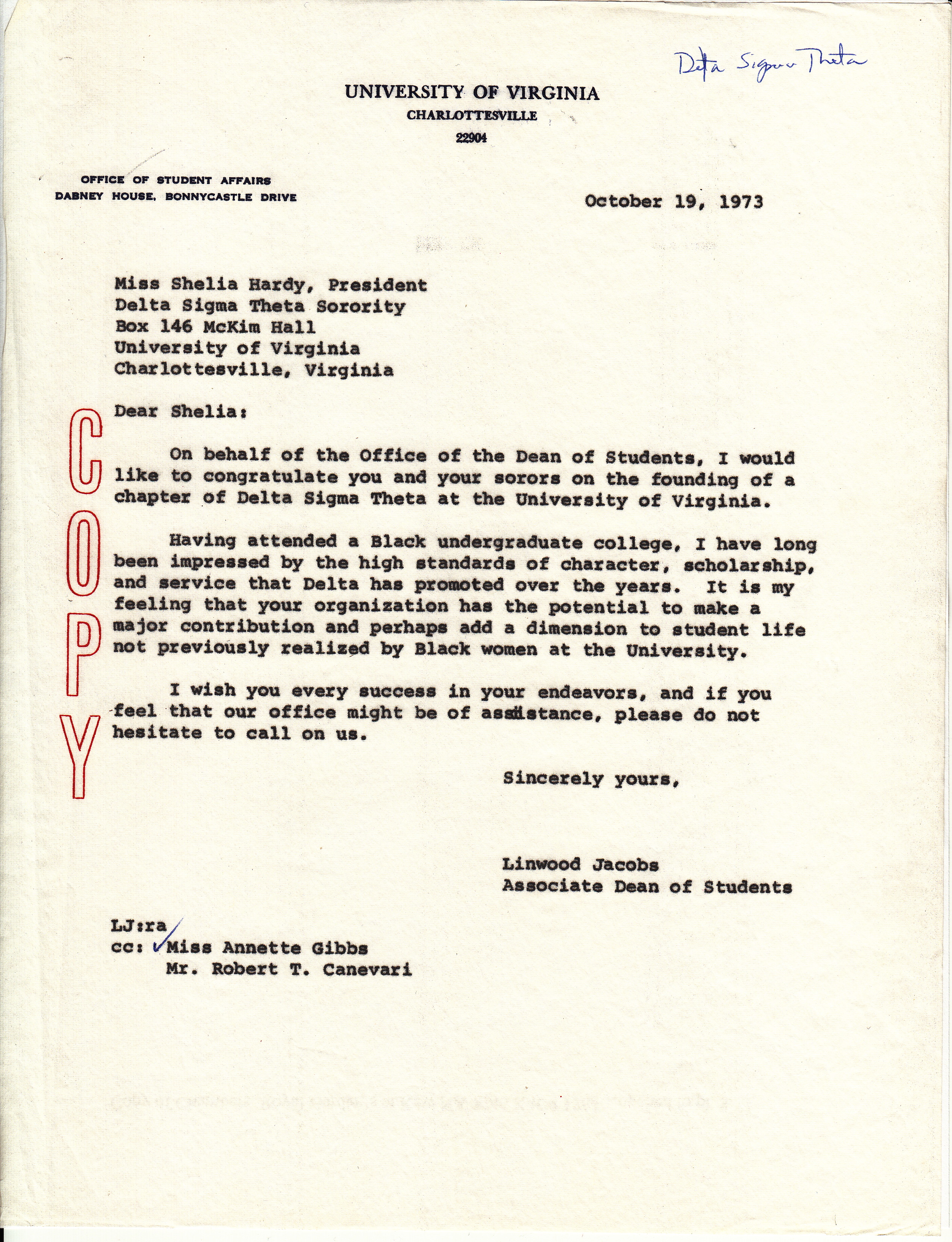 Letter from Linwood Jacobs to Sheila Hardy, congratulating her on the founding of Kappa Rho Chapter of Delta Sigma Theta at the University of Virginia, 19 October 1973. (RG-18/2. Image by Petrina Jackson)

The U.Va. yearbook, Corks and Curls, which ran from 1888 to 2008, also provides a window into fraternity and sorority life. 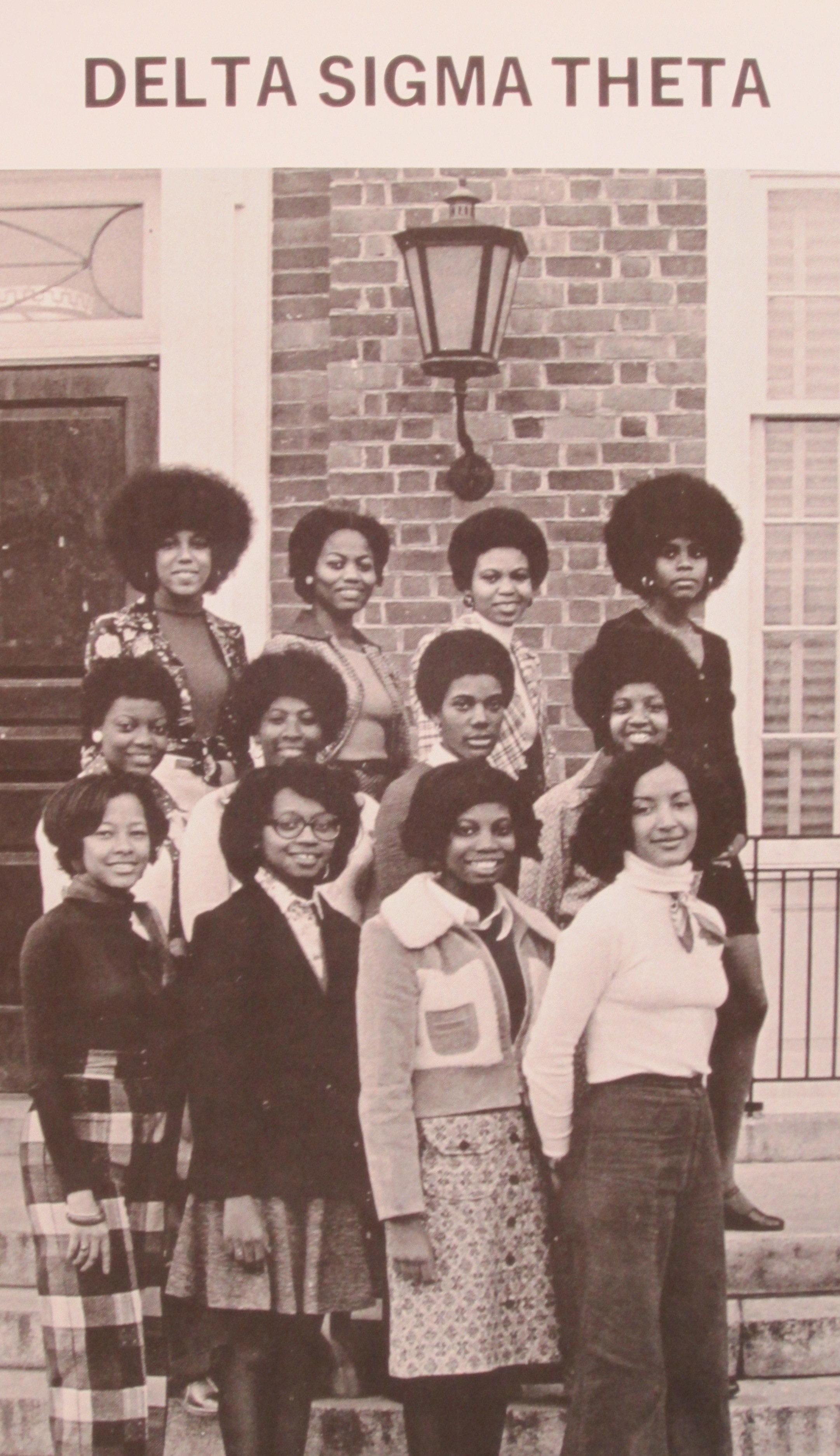 Another place to look for sorority information is in the personal papers of its members, such as Alice Jackson Stuart.  Jackson Stuart was a Delta from Richmond who was initiated in 1934 at Virginia State College (now University), the oldest Delta chapter in the state.  She was a student at Virginia Union University, which did not yet have a Delta chapter.

Alice Jackson Stuart has the distinction of being the first known African American to apply to the University of Virginia or any white Virginia college for a professional or graduate degree, which she did in 1935.  U.Va. denied her entry, and she questioned this judgement.  The University’s response was that they denied her because of her race and “other good and sufficient reasons.” After her rejection, the state of Virginia passed laws that funded the tuition for African American students to study outside of the state instead of having them desegregate colleges and universities within Virginia.  Jackson Stuart graduated from Columbia University with a Master of Arts degree in 1939.  Almost seventy years after her rejection by the University of Virginia, her son, Judge Julian Towns Houston of Brookline, Massachusetts, gave her papers to the Special Collections Library in 2003.  She finally “entered” the University. 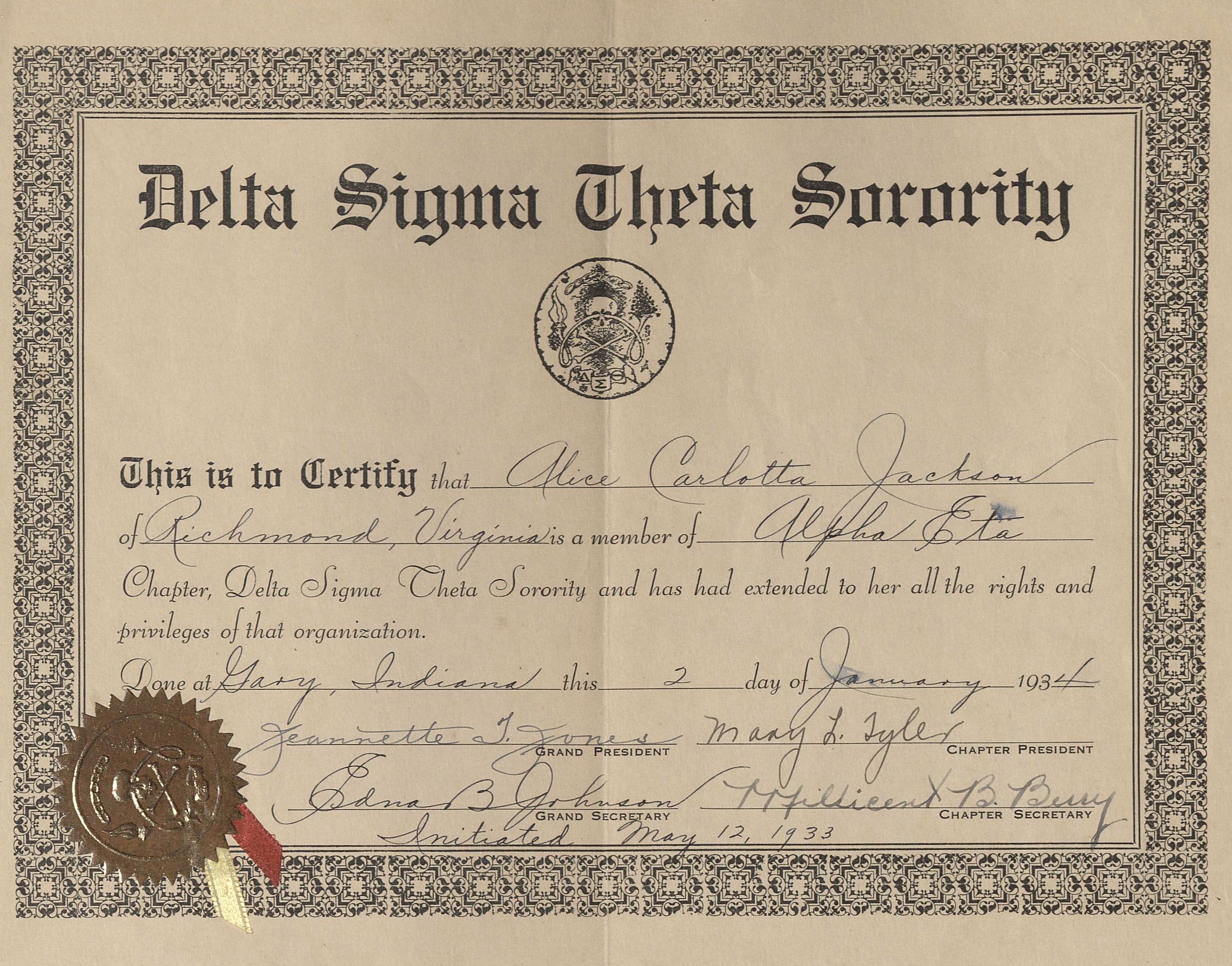 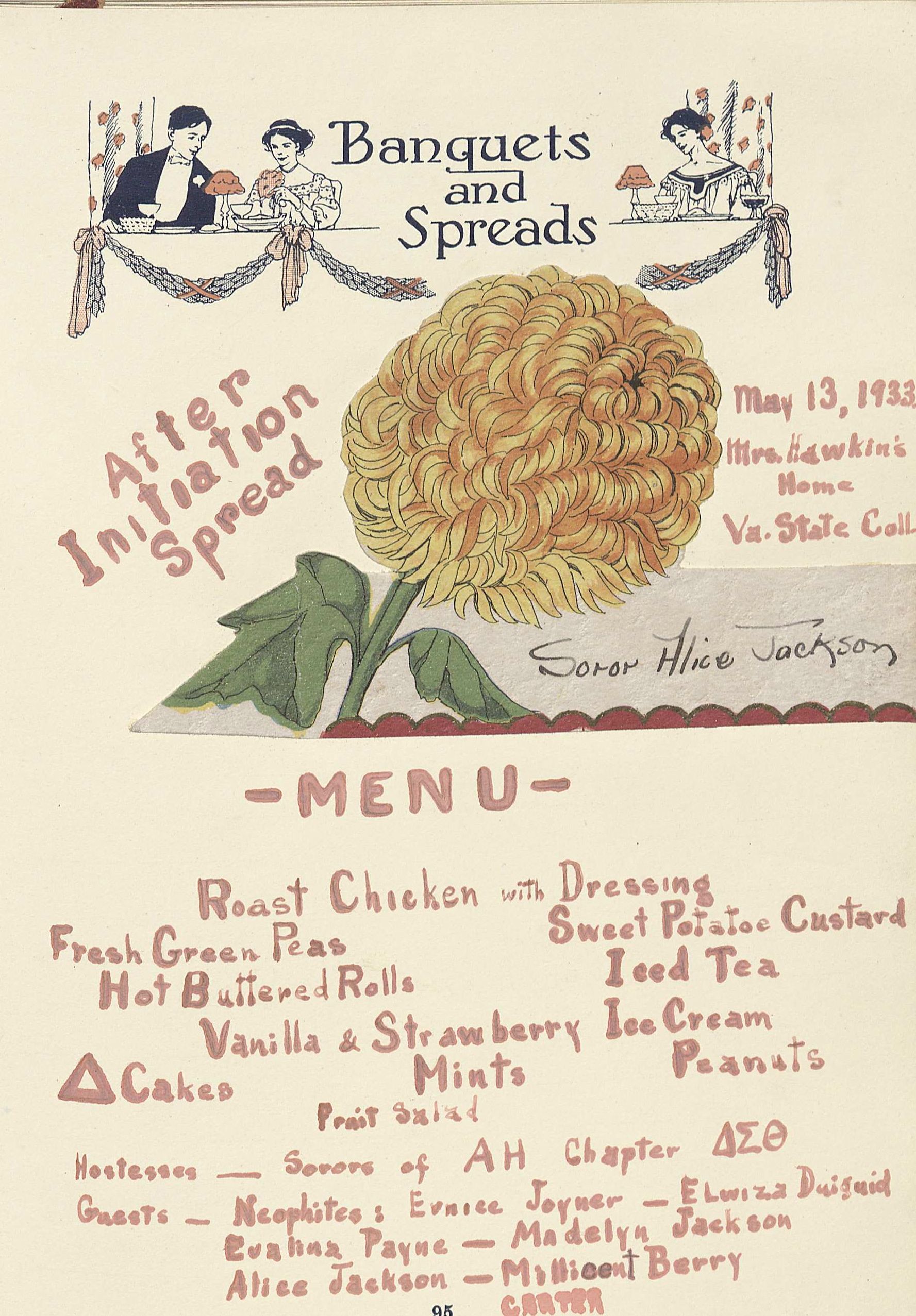 Although there is a lot to learn from items across our collections related to Delta Sigma Theta and other African American fraternal organizations, we hope to acquire records of  local chapters and individual alumni, ensuring the preservation of their legacy for generations to come.