The Small Special Collections Library is proud to announce our successful application for a seed grant to begin to scan our holdings of the periodical Our Mountain Work in the Diocese of Virginia. Published from 1909 to 1954 by the Board of Missions of the Diocese of Virginia, this periodical documents the founding of Episcopal mission churches and schools in the Ragged and Blue Ridge Mountains of Central Virginia by Frederick Neve, Archdeacon of the Blue Ridge. Our Mountain Work is a uniquely rich resource for the study of communities that were little documented at the time. The periodical’s writers had intimate contact with individuals and families who were otherwise extremely isolated. Many of the magazine’s issues predate the establishment of the Shenandoah National Park in 1933, an act that displaced hundreds of families and eradicated many small mountain communities. 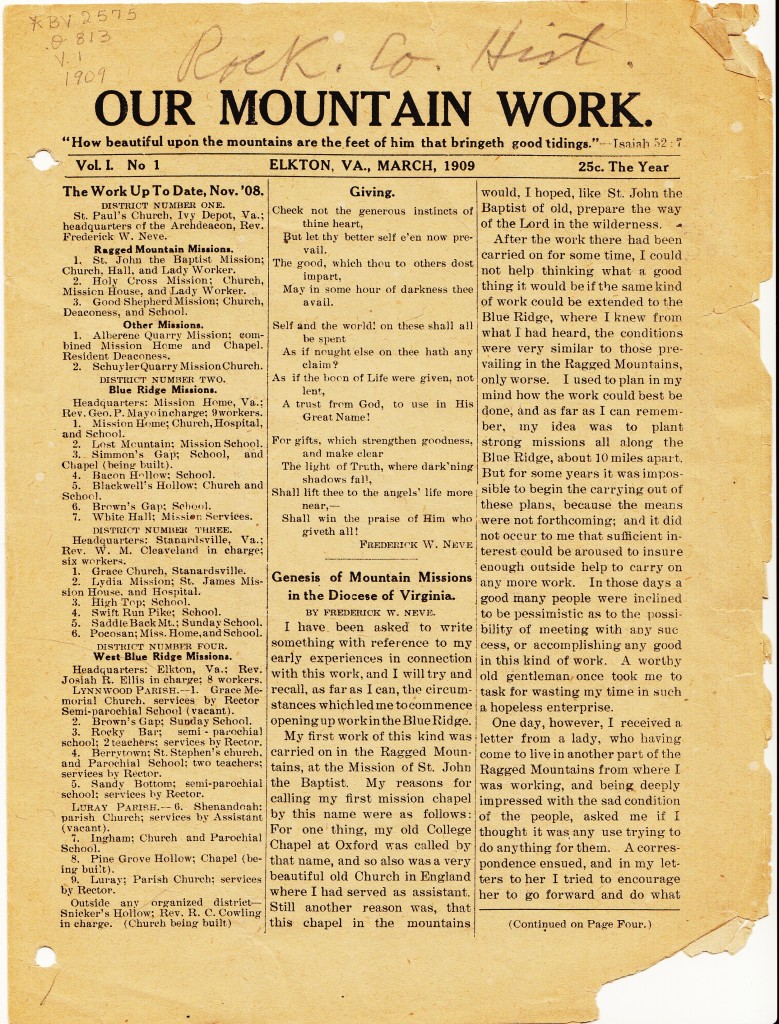 The grant of $3000 comes from the Endowment Fund of the Emmanuel Episcopal Church in Greenwood, Virginia. The Emmanuel Endowment Fund Board annually administers grants in “furtherance of exclusively religious, charitable or educational purposes.”  We are grateful to the Board for its support and look forward to having this unique resource made available beyond the underground walls of Special Collections. 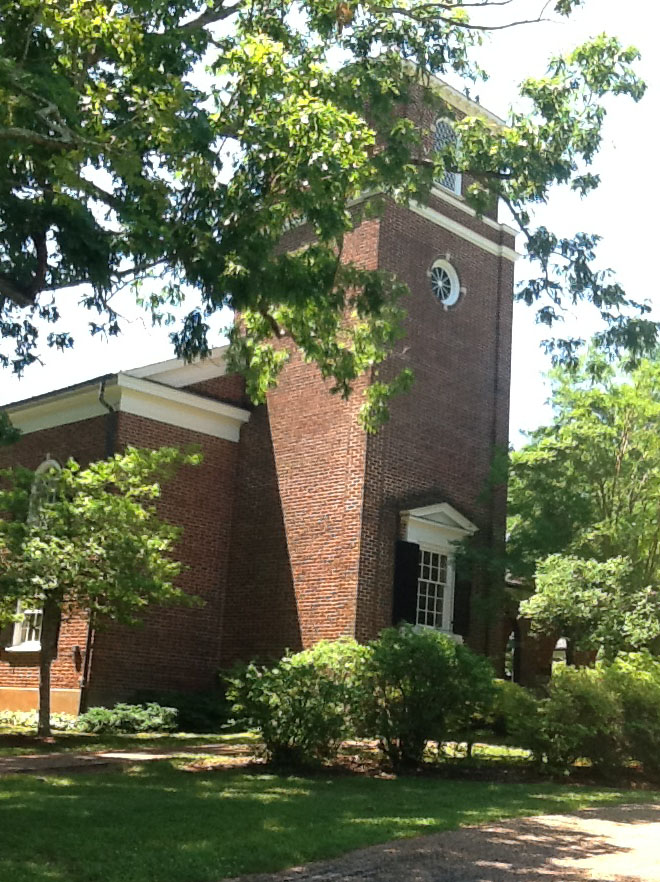 U.Va.’s holdings of Our Mountain Work in Special Collections total 370 issues of the over 400 that were published and comprise the largest single collection available to researchers. Smaller collections reside at the Virginia Theological Seminary’s Bishop Payne Library and the Virginia Historical Society. Special Collections will begin the scanning project in early Fall of 2013. The images will be placed in the University of Virginia Library’s digital repository accessible through the online catalog VIRGO.

Frederick William Neve, born in the county of Kent, England, was educated at Merton College, Oxford, and ordained a deacon in 1880 at the abbey church of St. Albans. In 1888, the vestries of St. Paul’s (Ivy, Va.) and Emmanuel (Greenwood, Va.) Churches asked Neve to come to Virginia to serve the needs of their congregations, and he accepted. Neve served as the rector of Emmanuel Church from 1888 to 1905  In 1890, Neve built his first mission church in the Ragged Mountains, St. John the Baptist. Ten years later, he began supporting a teacher at Simmon’s Gap, an isolated community in the Blue Ridge Mountains. This was the beginning of his work with the mountain inhabitants that eventually embraced seven Virginia counties and became the Archdeaconry of the Blue Ridge. As editor of Our Mountain Work, Neve made possible this window in time to the history of Central Virginia during the first half of the twentieth century. 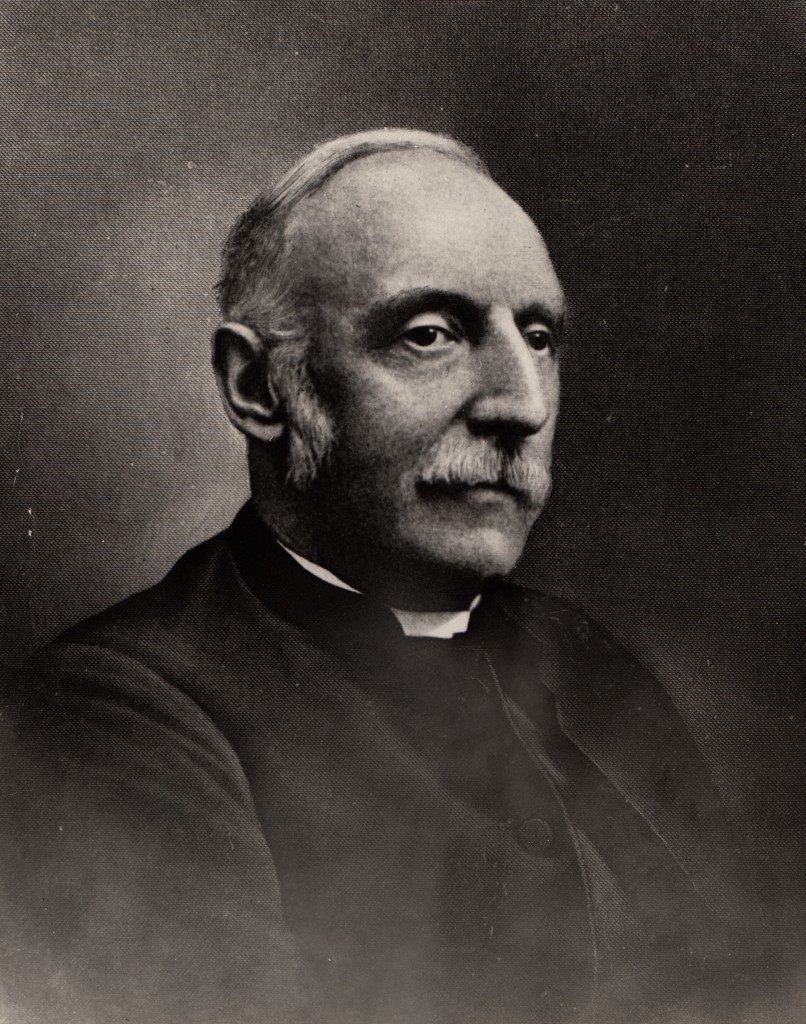 Over the years, U.Va.’s holdings of Our Mountain Work have been accessed by researchers both local and distant for their religious, social, educational, and genealogical significance.  Recently a researcher from Northern Virginia requested photocopies of over 800 pages from the periodical—a request which Special Collections had to decline due to preservation concerns. Many of the original issues have small tears and nearly all were initially folded; consequently, there are crease marks and separations at the folds on a large number of issues.  These preservation issues prompted Special Collections to apply to the Emmanuel Endowment Board for funds to scan the paper issues, so that all interested researchers will have access to these documents without producing further damage to the delicate originals. 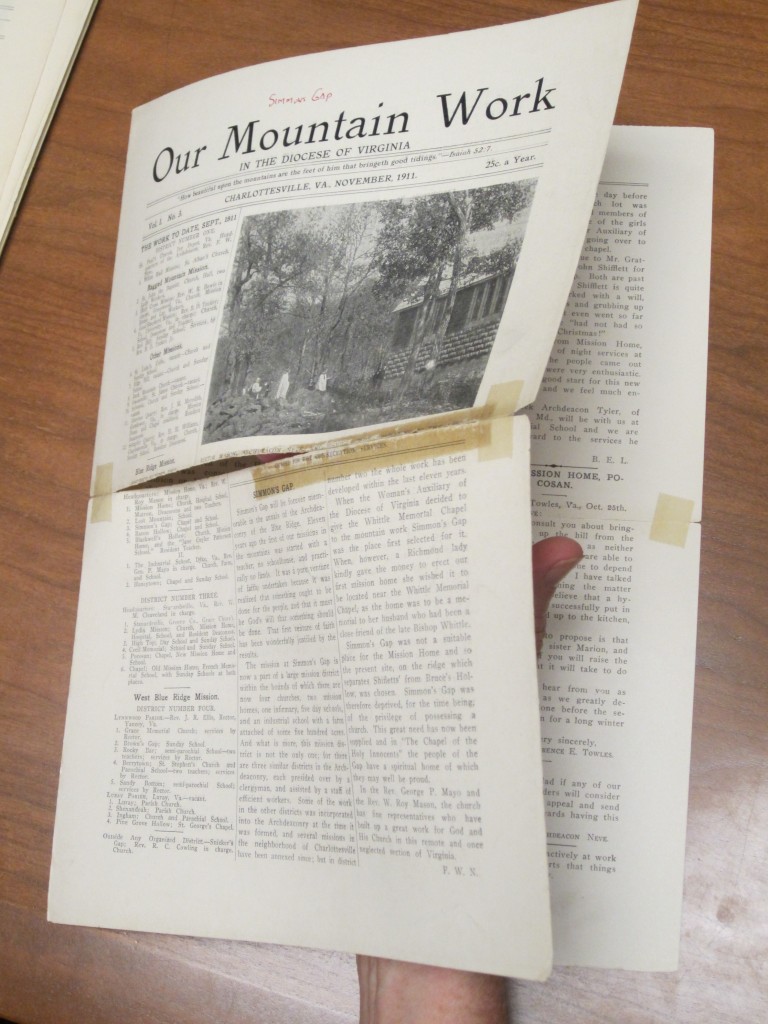 This image reveals some of the conservation problems inherent in these ephemeral artifacts. _Our Mountain Work_ 1.3 (November 1911). (BV2575 . 082. Photograph by Petrina Jackson).

Beyond Our Mountain Work

Emmanuel Church and Frederick Neve are well-represented in the holdings of Special Collections beyond Our Mountain Work.  The Papers of Emmanuel Church (MSS 10731, etc.) were initially deposited in Special Collections in 1987 and contain parish registers, 1885-1983; vestry books, 1909-1977; Woman’s Auxiliary minutes, 1871-1972; and financial statements, 1976-1977; written and oral histories. With these are also parish and church service registers of Holy Cross Mission, 1912-1942, a mission church established by Neve near Batesville, Va. Three collections of Neve’s personal papers (MSS 9115, MSS 9970,-a-b, and MSS 10505) give an even more in-depth view of the outreach mission work done by this extraordinary individual.