1938 was an annus mirabilis for the U.Va. Library and its Special Collections: Alderman Library opened; Special Collections moved into purpose-built quarters on the second floor (today’s McGregor Room); and U.Va. was given the Tracy W. McGregor Library of American History.  This extraordinary holding of several thousand rare books, maps, and manuscripts, assembled by Detroit philanthropist Tracy W. McGregor (1869-1936), instantly provided U.Va. with a world-class collection of primary sources for American history.  In 2013 the McGregor Library will celebrate its 75th anniversary with a major exhibition opening in October. 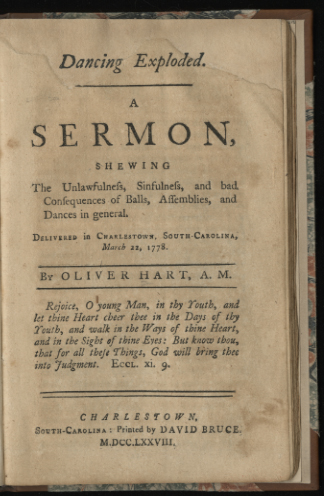 One of the McGregor Library’s greatest strengths is its coverage of the American South, and this remains a collecting priority.  Particularly desirable are rare Southern imprints such as Oliver Hart’s memorably titled Dancing exploded, published in Charleston, S.C. in 1778.  A Baptist minister, Hart (1723-1795) first preached this sermon condemning dancing and fancy dress balls in 1759.  Nineteen years later, he found it necessary to fix his admonition in print. No sooner had the embers of Charleston’s devastating January 15, 1778 fire cooled than “we had Balls, Assemblies and Dances in every quarter.”  The conflagration, coupled with the ongoing privations of the American Revolution, were for Hart “so many loud calls to repentance, reformation of life, and prayer, that the wrath of God may be turned away from us.”  Hart specifies fourteen evils of dancing, including wasted time, unnecessary expense, vulgar music, and immodesty of conversation and movement. “Thus the heart becomes a sink of uncleanness—a cage of all manner of abominable and filthy lusts.”  Only six copies are recorded of this, the third earliest American work on dance.  (The McGregor Library also holds the earliest, Increase Mather’s An arrow against profane and promiscuous dancing.) 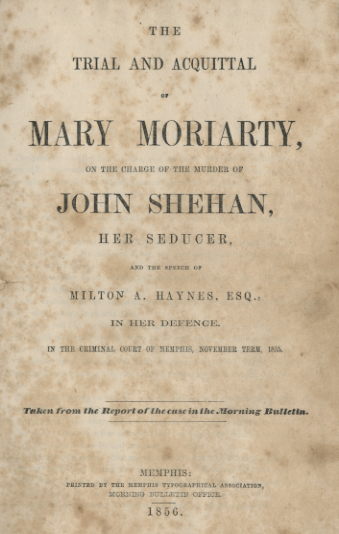 We are especially eager to add unrecorded works to the McGregor Library.  One might think that copies of virtually everything printed a century or two ago would have found their way into libraries by now, but previously unknown works continue to turn up with surprising frequency.  It is our mission to make these new discoveries accessible to scholars.  A case in point is The trial and acquittal of Mary Moriarty: the only known copy surfaced only last year and was quickly snapped up for the McGregor Library.  An Irish immigrant working as a domestic in antebellum Memphis, Mary Moriarty was engaged to wed John Shehan, the father of her child, only to have Shehan back out at the last minute.  In a rage, Mary stabbed him to death in broad daylight.  Attorney Milton Haynes expertly defended her in front of an all-male jury, arguing per the Bible “that he who seduces a maid, upon the most solemn vow of marriage, hath committed a worse crime than that of murder!”  The jury then “retired for a few minutes, and returned a verdict of ‘NOT GUILTY,’ the announcement of which was enthusiastically cheered by the large crowd of people in the Court House.”  Capitalizing on the case’s notoriety, the Memphis Morning Bulletin condensed and repackaged its newspaper coverage in this crudely printed pamphlet. 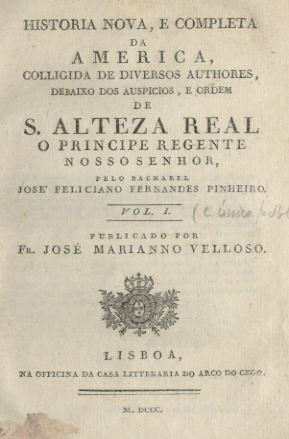 The McGregor Library is especially rich in “European Americana.”  These European imprints provide many of our best primary sources for New World discovery and exploration, as well as alternate perspectives on American history and culture.  Historia nova, e complete da America is the latest addition.  This rare history of the Americas from Columbus’s discovery to 1763 was compiled for a Portuguese audience from a variety of sources.  Printed in 1800 at the newly founded “Arco do Cego” press (still active as Portugal’s Imprensa Nacional), the Historia reflects Portugal’s late 18th-century effort to invigorate its arts and sciences. 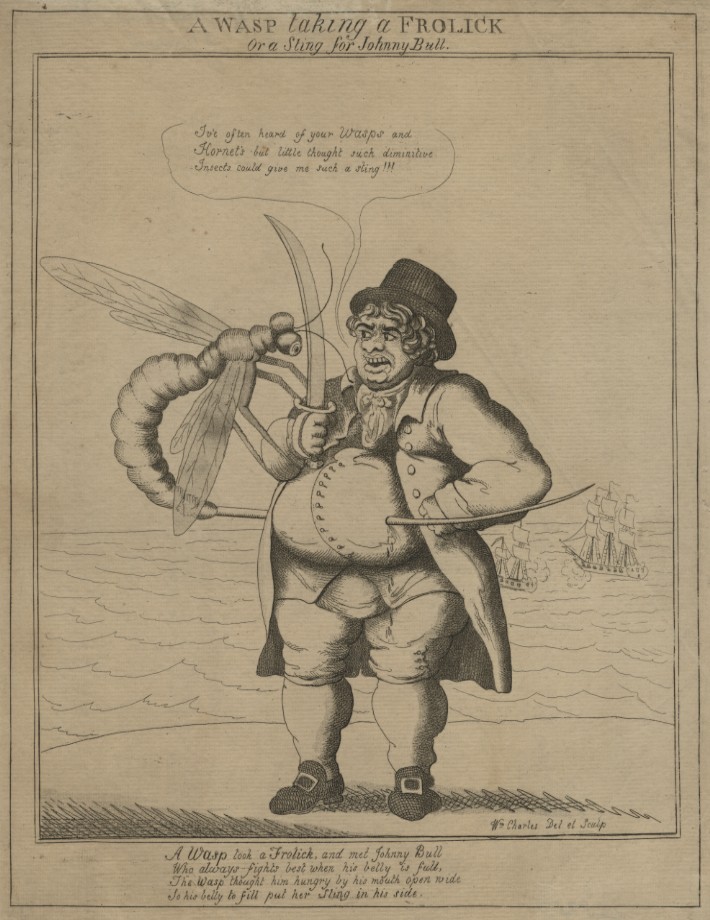 A little-known strength of the McGregor Library is its collection of early 19th-century American satirical prints, recently augmented by two rare etchings by William Charles. Around 1806 Charles emigrated from Scotland to the United States, where he helped to introduce the thriving British tradition of political caricature.  During the War of 1812 Charles issued a number of prints which vividly and humorously convey American popular opinion.  In A wasp taking a frolick, or a sting for Johnny Bull, Charles references the heroic naval engagements of the U.S.S. Wasp and Hornet during the war’s first months. The Hornet captured several British ships, and the Wasp also “stung” John Bull by capturing two British warships before surrendering to a far larger British vessel. 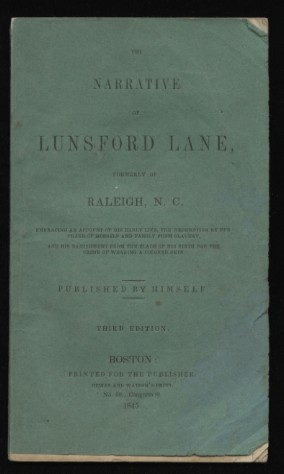 The McGregor Library possesses an enviable collection of antebellum slave narratives, of which The narrative of Lunsford Lane, in its original printed wrappers, is a noteworthy example. Typically these narratives were self-published (as here) and sold for the author’s benefit while traveling the anti-slavery lecture circuit. Lane was born into slavery on a plantation near Raleigh, N.C., but his wife and growing family were owned by a different master.  With his owner’s tacit consent, Lane rented out his own labor so that he could establish a pipe and tobacco shop in Raleigh.  It thrived, in part because Lane was careful to maintain the appearance of being poor and uneducated.  Eventually Lane earned enough to purchase his freedom, open more businesses, and begin to emancipate his wife and children.  By 1840, however, Lane found himself the target of whites fearful that he was spreading abolitionist sentiments. Two years later he fled with his newly freed family to Boston.