We at the UVA Library were saddened to hear of the death of Albert H. Small, former UVA Board of Visitors member, longtime benefactor of the Library, and namesake along with his wife Shirley of the Albert and Shirley Small Special Collections Library. He was 95 years old. 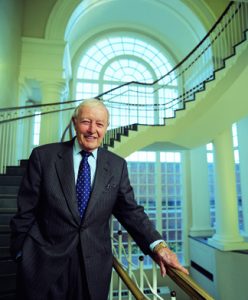 Albert H. Small in the stairwell of the Albert and Shirley Small Special Collections Library in 2004, the year the library opened.

Small served in the United States Navy during World War II and graduated from the University of Virginia in 1946 with a degree in chemical engineering. After this he began his long and successful professional career as a real estate developer, along with an equally notable career as a collector and philanthropist. His major collecting interest was in American history, and his philanthropic contributions of time, resources, and expertise were enormous.

Albert Small was much more than simply a namesake of the Small Special Collections Library. He gave generously to the library’s construction, but he also lobbied relentlessly on the University’s behalf when the plans to erect a new building first got underway. Former University Librarian Karin Wittenborg, who worked closely with Small as the new library was being conceived, praised his determination, noting that “Albert was an avid and persuasive advocate for a new Special Collections library when few others believed it would be built. If not for Albert’s commitment and support, it would not be here today.” University Librarian John Unsworth agreed, adding that “it could never have been done without Albert’s vision and industry.” And in addition to his central role in the creation of the physical building, Small donated to the new library the Albert H. Small Declaration of Independence Collection, the most comprehensive holding of its kind related to the Declaration of Independence. 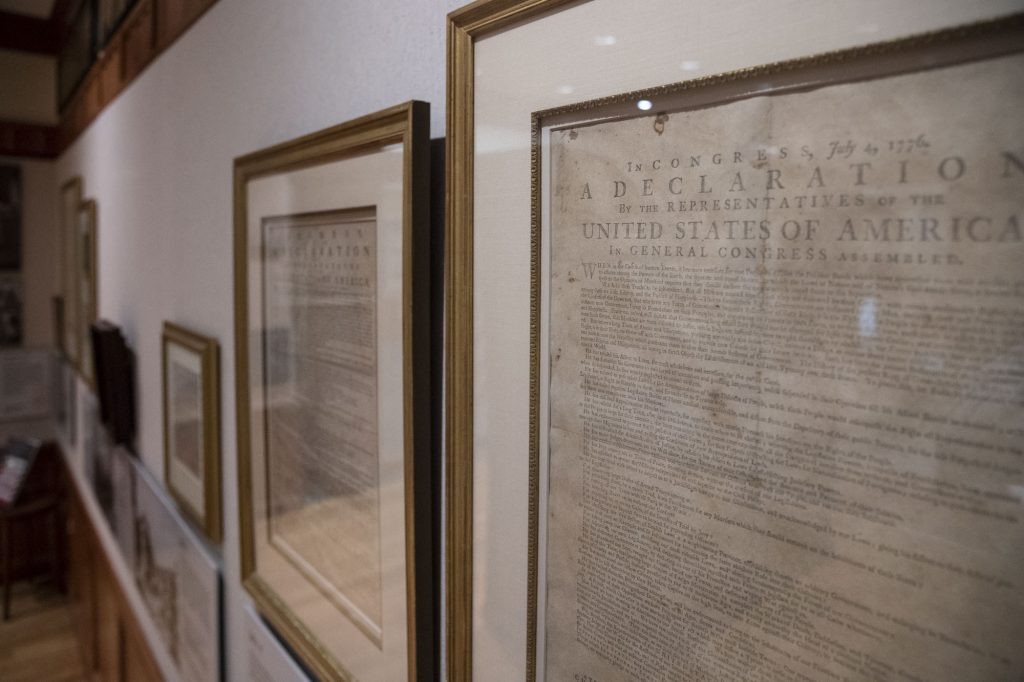 Reproductions of John Dunlap’s broadsides on display in the Declaration of Independence Gallery. As Curator David Whitesell notes, “Thomas Jefferson famously directed that his tombstone list only three of his many achievements. The Small Special Collections Library holds the archive for one: the University of Virginia. Hence we are profoundly grateful to Albert Small for entrusting to us his pre-eminent collection on a second: the Declaration of Independence.”

The Albert H. Small Declaration of Independence Collection includes letters, documents, and early printings related to the Declaration and its fifty-six signers, including a number of letters written by the signers. A much larger number of broadsides and newspaper printings of the Declaration and a series of later printings reveal how the document became iconic as an expression of the rights and freedoms cherished by Americans. It also includes an early printed facsimile of the official engrossed copy of the Declaration, commissioned for engraving by John Quincy Adams, as well as the engraving itself, presented to the Marquis de Lafayette in recognition of his service during the Revolution and hanging in the Marquis’ bedchamber when he died. And it features the jewel of the collection, the Albert Small copy of the Dunlap Broadside, printed by John Dunlap of Philadelphia just hours after the final text was approved by Congress. The Albert Small copy is among the finest surviving examples of a Dunlap Broadside, and almost certainly belonged to George Washington. Highlights of the collection are on permanent display in the Declaration of Independence Gallery in the Small Special Collections Library. The pleasure his Declaration collection brought to the public is vividly recorded in the thousands of grateful comments inscribed in the Declaration Gallery visitors’ book. 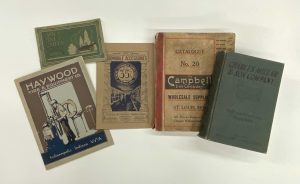 In December 2014 Albert Small donated to the Library a second magnificent collection: 3,400 American trade catalogs dating back to 1839. Formed over several decades of assiduous and imaginative collecting, the Albert H. Small American Trade Catalogs Collection is among the richest and most diverse of its kind. Its holdings document almost every conceivable aspect of American manufacturing, commerce, and consumption. These ephemeral and very rare documents are invaluable to UVA faculty and students in many disciplines as they seek to understand the artifacts of our past and study the world that they occupied.

Not only did Albert Small work tirelessly and give generously to realize the Library’s long-held dream of a world-class, purpose-built facility to house its priceless rare book and manuscript collections, and not only did he donate among the most priceless and rare of those collections, but once the Albert and Shirley Small Special Collections Library opened in 2004, he remained deeply engaged with and committed to its mission. Library staff fondly remember his impromptu visits whenever business brought him to Grounds. Once he appeared just as an out-of-town group arrived to view his Declaration of Independence collection; the group was thrilled when Small himself graciously offered a guided tour! He was also instrumental in arranging for many distinguished guests to visit the library and view its remarkable holdings.

As noted above, Albert Small’s contributions to the Library, as varied and important as they were, are only a drop in the ocean of his philanthropy. His contributions to institutions preserving American arts, culture, and history were numerous and tireless. Those institutions include George Washington University, the National Gallery of Art, the National Archives Foundation, the National Museum of the American Indian, the Library of Congress, the National Symphony Orchestra, and many more. His awards were also numerous, including The National Humanities medal, given to him by President Barack Obama in 2009. Even at UVA, Small’s generosity was not limited to the Library, and the Small Special Collections building is not the only building on Grounds that bears his name — he also supported the renovation that created the Engineering School’s Albert H. Small Building. 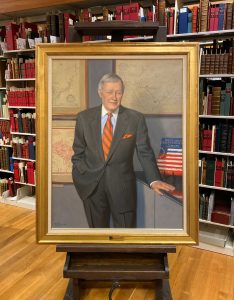 Portrait of Albert H. Small currently on display in his namesake library.

Albert H. Small will be remembered at the University and beyond not only for his passion and devotion to history, but for his dedication to sharing that passion with others and collecting and preserving important resources for the education and edification of future generations. His desire to share the treasures of his Declaration collection with students and scholars made that collection an invaluable resource for teaching and learning at the University and beyond, and the prestige it lent our special collections became a catalyst for other collectors to donate related materials. We are all truly indebted to Albert Small’s vision and generosity and to the legacy he built.

One thought on “In Memoriam: Albert H. Small”