We’re so excited to join the #ArchivesHashtagParty! Organized by the U.S. National Archives, the #ArchivesHashtagParty is a way for all types of archives to share their collections on social media around a fun topic. They provide a new hashtag theme each month; we bring our own collections. This month we’re celebrating #ArchivesBlackEducation, except we’re already bending the rules: we’ll post stories from our collections about Black educators and students each Friday through February for Black History Month. Here on the blog, we’ll share longer versions of those stories with more context from our collections. 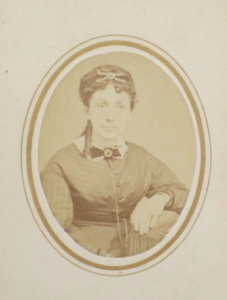 Under the auspices of the Freedmen’s Aid Society, Philena Carkin, a young white school teacher from Massachusetts, moved to Charlottesville in 1866 to teach newly freed children. Carkin worked under “Yankee School Marm” Anna Gardner who had founded the school the year before and had named it The Jefferson School. The Jefferson School initially was located in part of “an immense brick building… in an advanced state of dilapidation” on Main Street known as the “Mudwall” or Delevan building. This building had served as a Confederate hospital during the Civil War but was repurposed by the War Department as a Freedmen’s School during Reconstruction. The “Mudwall” was located behind the site of present-day First Baptist Church on Main Street, on the other side of and very close to the railroad tracks.

In her Reminiscences (MSS 11123), written 35 years after her time in Charlottesville, Carkin provides descriptions of many things, including poor treatment of freedmen and teachers by University of Virginia students:

“At one time they had a habit of climbing upon the top of the cars of the Va. Central trains that stopped at the University station. With their pockets filled with stones, as the train moved on they would throw these missiles right and left as they pleased. The train passed within a rod of our school building, and they would sometimes make a target of our windows, two or three times breaking every pane of glass in a window.”

The manuscript of the Reminiscences of Philena Carkin which resides in the Small Special Collections Library was transcribed as part of the E-Text project. 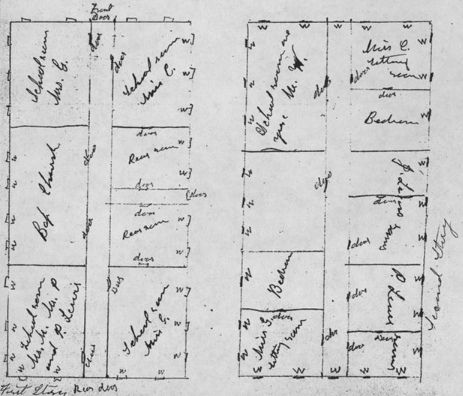 Pencil drawing by Philena Carkin of the floorplan of the school and teachers’ living quarters from “Reminiscences of my Life and Work among the Freedmen of Charlottesville, Virginia, from March 1st 1866 to July 1st 1875. Vol. 1”