We are pleased to feature a guest post by Emily Caldwell, Fourth-Year English major/Media Studies minor and blogger for The Media Studies Experience.

In my second year at UVa, I took Professor Stephen Raillton’s class on Modern American Authors. We read everything from F. Scott Fitzgerald to Richard Wright, but one author I was unfamiliar with up until this point was Willa Cather. That semester, I read her novel O Pioneers! and absolutely fell in love with her storytelling and writing style. 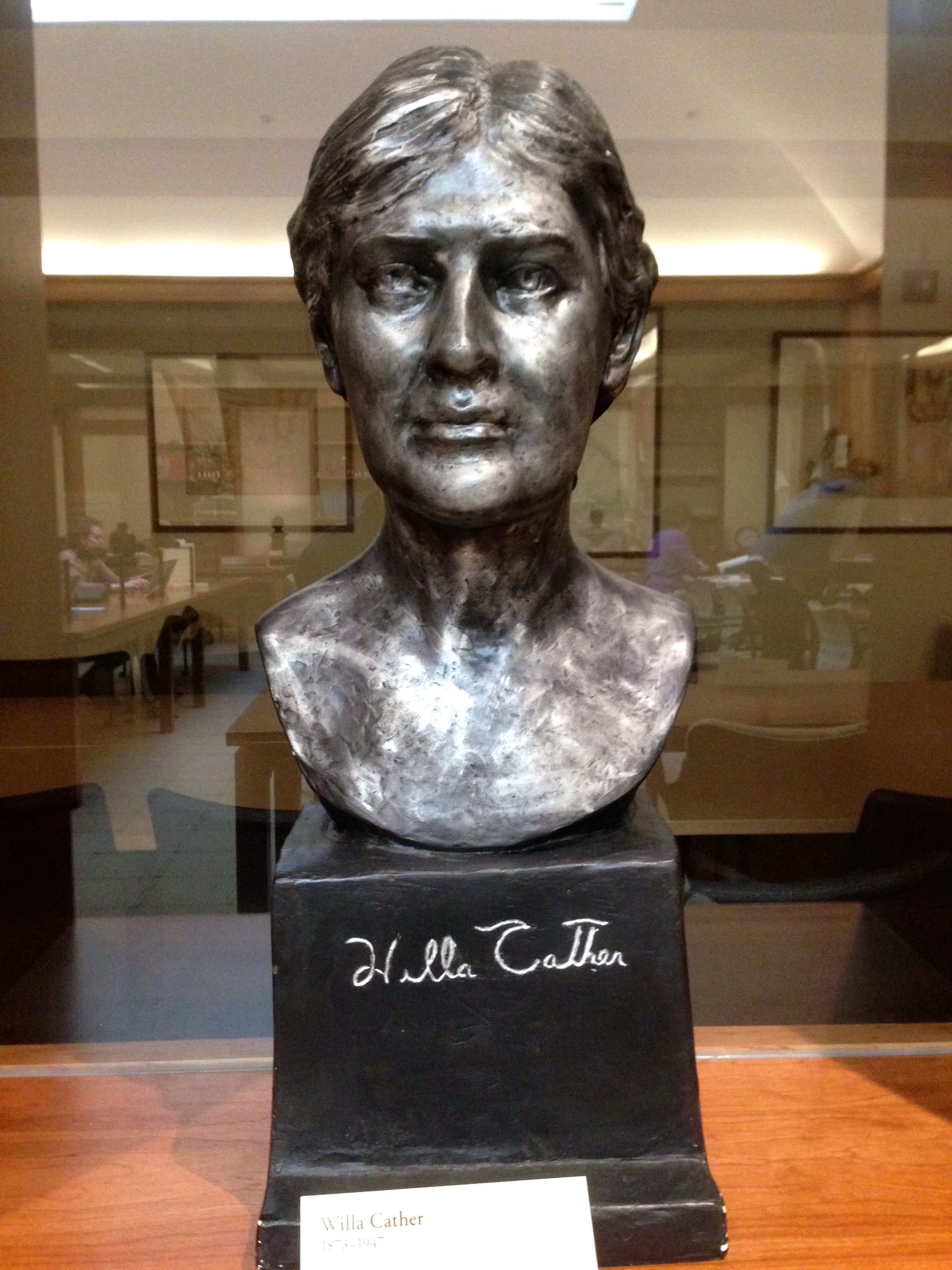 A few days ago, I spent the afternoon in the U.Va. Special Collections with some of Cather’s personal items including signed photographs, manuscripts, and letters. It’s safe to say that I fell in love with her even more. 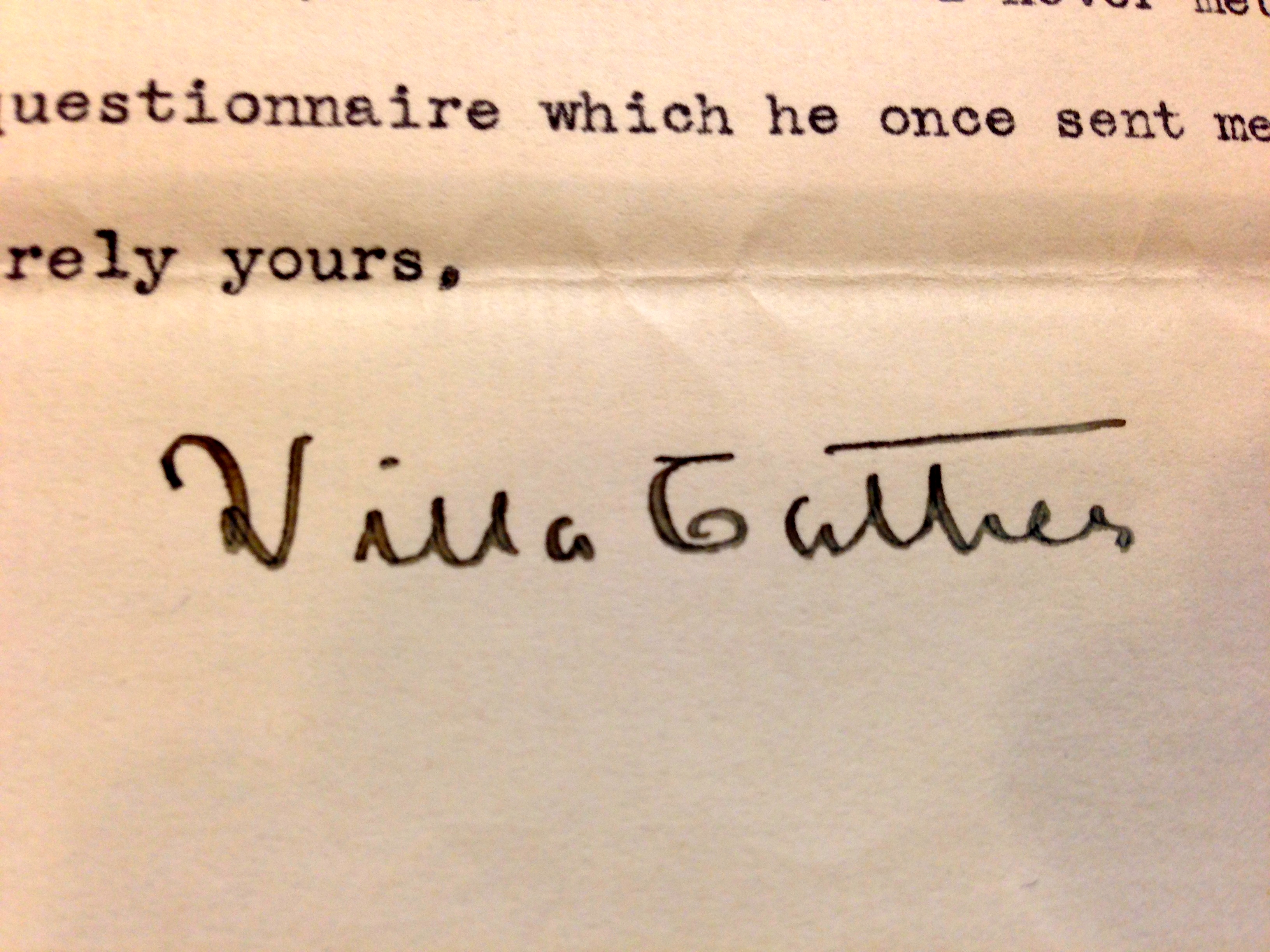 Willa Cather’s signature from her letter to the Head of the English Department at Mount Saint Mary’s College, February 7, 1940. (MSS 6494. Emily Caldwell) 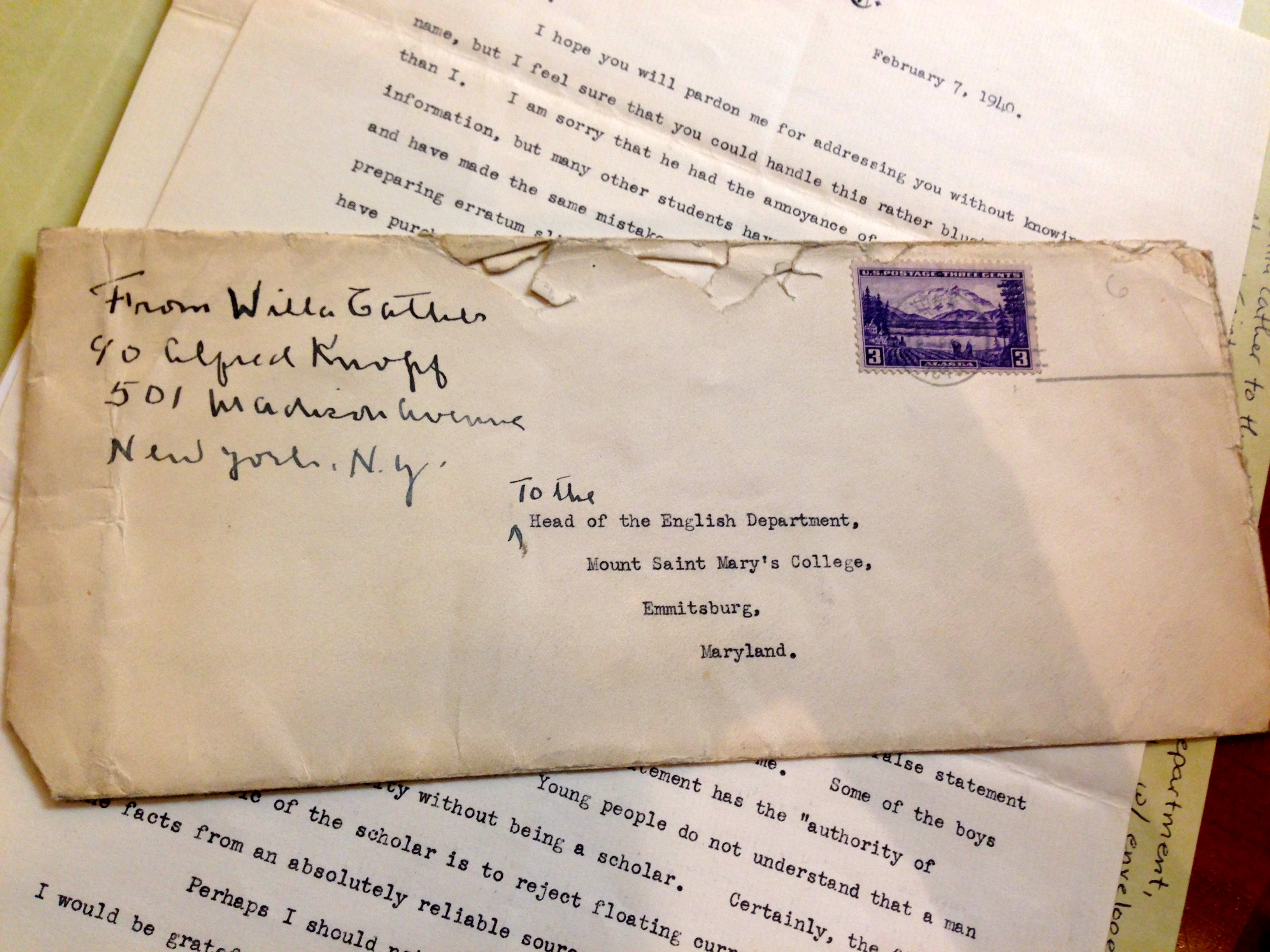 Envelope and letter of Willa Cather to the Head of the English Department at Mount Saint Mary’s College, February 7, 1940. (MSS 6494. Photograph by Emily Caldwell)

First of all, the woman can make me laugh. In a letter dated February 7, 1940, to the head of the English Department at Mount Saint Mary’s College in Maryland, Cather defends her  religious beliefs, after having apparently received a letter from a student at the college, and instructs him, through the professor, to not believe everything he reads. Cather addresses the letter, “Dear Sir,” and then says, “I hope you will pardon me for addressing you without knowing your name, but I feel sure that you could handle this rather blustering boy better than I.” I could not help but chuckle to myself in the middle of the library’s dead silent reading room. Apparently this “blustering boy” had read somewhere in a book that Cather was a Roman Catholic convert, judging by her obvious praise of the Church throughout her literature. Although Cather claims that the Roman Catholic Church is “certainly the greatest spiritual power this world has ever known,” she claims that the “answer is very simple” and she is “an Episcopalian because [her] mother and father were, and that Church is home to [her].” Not only did she scold the so-called “blustering boy,” but she requested that slips of paper explaining the facts of her beliefs be put in every copy of Vernon Loggins’s I Hear America, which claimed Cather was a convert to the Roman Catholic Church. From this particular correspondence, it is clear that Cather was not only a sassy and particular woman, but truly dedicated to her religion, and I find both traits admirable.

The next treasure I found in this collection was a letter from Cather to a Mrs. Ackroyed dated May 16, 1941. Out of all of the things I looked at from this collection, this was my favorite artifact because of the way Cather fondly reflects on her childhood home in Virginia. I was first referred to this letter after looking at a photograph of that home, in Willow Shade, VA. 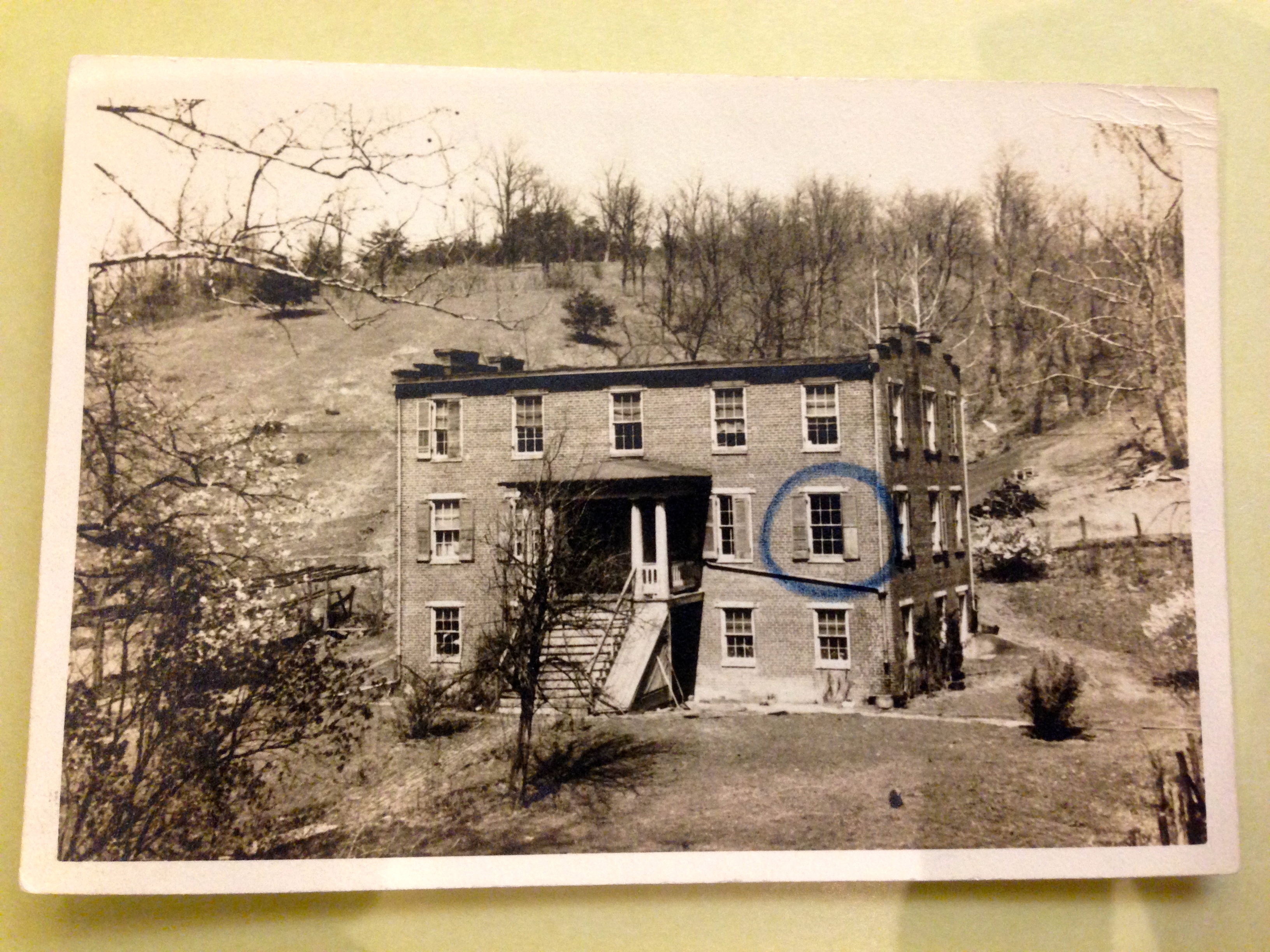 I thought it was peculiar that there was a blue circle around one of the windows on the house. After reading the letter, I found out some interesting facts about Cather’s childhood. In the beginning of the letter, Cather writes, “Your letter has awakened many pleasant memories. Your grandmother, Mary Ann Anderson, was a very special favorite of mine when I was a little girl of five to eight years old and lived in Willow Shade on the Northwestern Turnpike.” Cather continues to explain that when she would get sick as a little girl, she would “watch out of the front windows, hoping to see Mrs. Anderson coming down the road” because her family “usually sent some word to her when [she] was sick, because she was so tactful and understanding with a child.” I then made the connection to the photograph, on which Cather had actually circled the front window she used to sit at to watch for Mrs. Anderson. She recalls, “I several times walked up that beautiful Hollow Road, up to Timber Ridge, to see her in her little house where she lived all alone, and where she was as happy as the day was long.”

Cather then goes on in the letter to talk about her Aunt Marjorie, who she used to visit back in Virginia after her family moved out west to Nebraska. She writes, “I used to always spend many hours with Marjorie in the…sunny kitchen or on the shady back porch. She liked to talk about the old times in Virginia.” As I was reading the letter,  I felt the emotions and nostalgia she poured into this letter. She writes that she wished to “have the croup again” and she “could watch out of one of those windows at Willow Shade and see Mrs. Anderson coming briskly around the turn of the road.”

When I first started digging into this collection of Willa Cather’s artifacts and materials, I thought I would read into some of her personal relationships and see some interesting photographs. However, I never expected to read a touching letter reflecting on her childhood, and how much she wished she could be a child in Virginia again with the people who shaped her life so much. It is a very special moment and feeling to read one of the most brilliant authors I have ever read gush about their time spent in Virginia, my home state and the place where I, too, spent many magical years as a child, learning about the world. I never believed I could relate to Willa Cather so much, and I feel even more honored than ever to go to the University of Virginia, and call Virginia my home state. 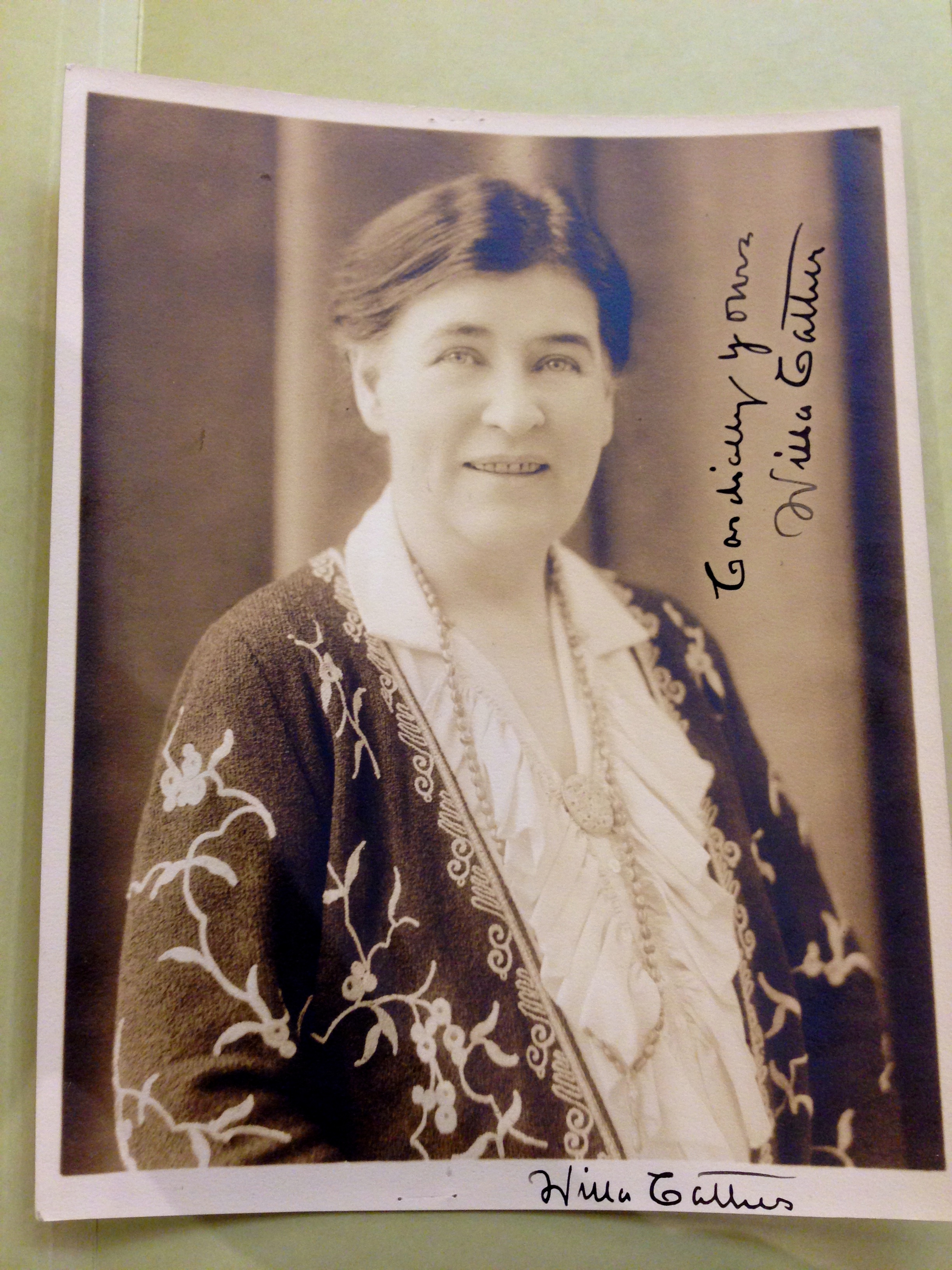 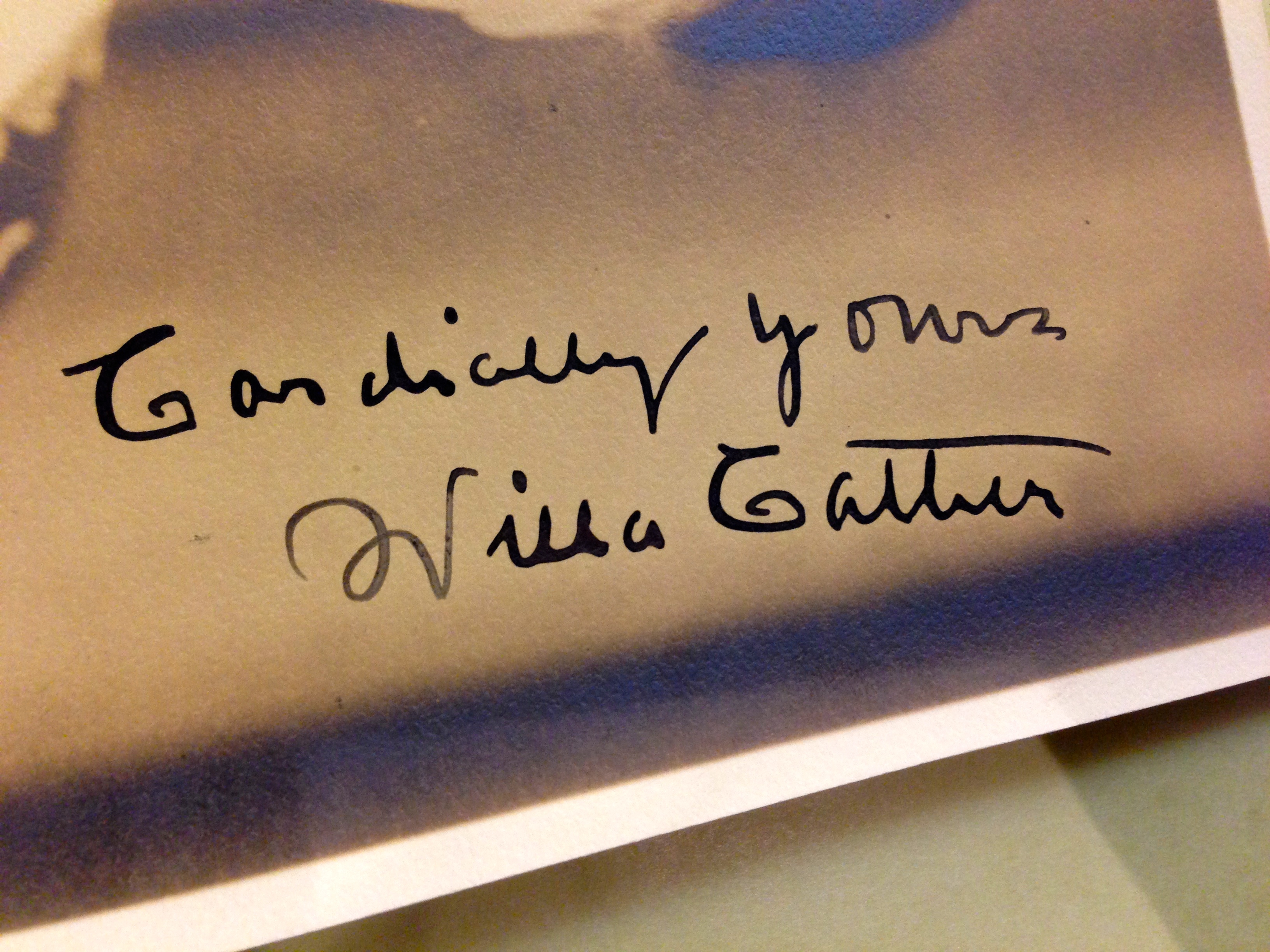 Permission was granted courtesy of Willa Cather’s estate to use quotations from her unpublished letters.