T is for William S. Tallman

William Staples Tallman (1906-1997) was one of two engineers who managed the construction of Mount Rushmore in South Dakota. Hired by sculptor Gutzon Borglum in 1929, he served as superintendent of construction from 1930 to 1935.  Tallman had also assisted Borglum on the North Carolina Monument at Gettysburg National Military Park; he also served as model for that monument’s lead figure. For the balance of his career, he worked as a potter and sculptor and in technical ceramics manufacturing. Our large collection of his papers includes extensive documentation of his work at Mount Rushmore. 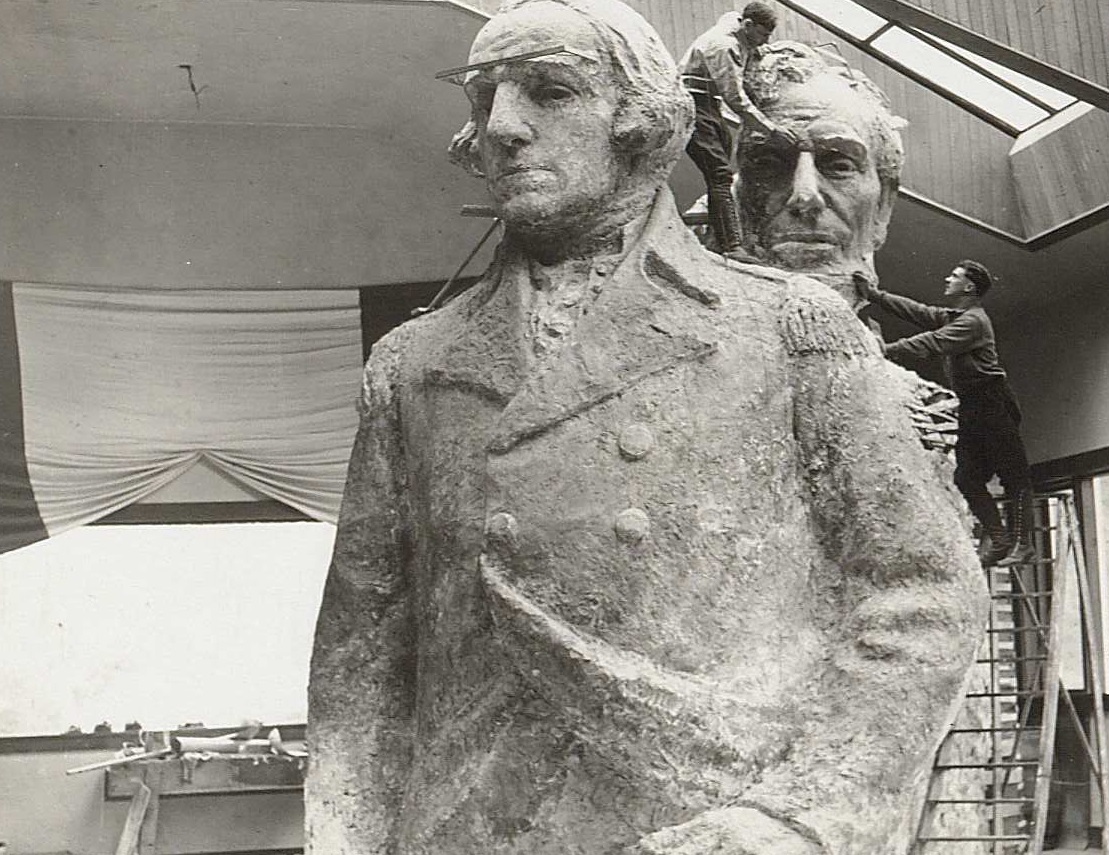 A photograph of William Tallman and Ivan Houser, an assistant sculptor for Gutzon Borglum,  studying a scale model of Abraham Lincoln produced in preparation for the monument’s construction (ca. 1927, photographer not identified). (MSS 12129. Image by Molly Schwartzburg.) 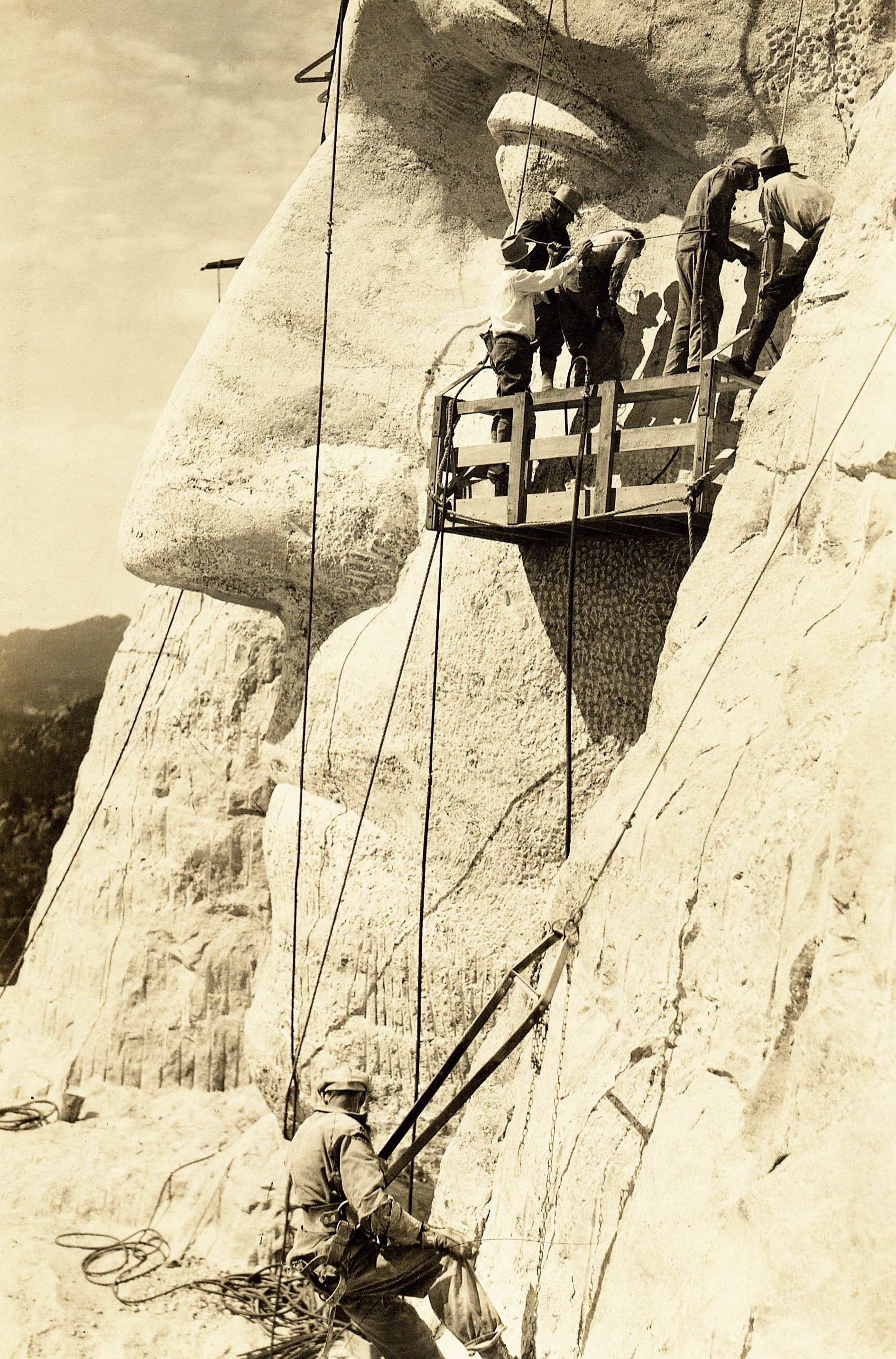 This photograph shows, from left to right, assistant sculptor Hugo Villa, sculptor Gutzon Borglum, two unidentified workers, and engineer William Tallman.  A note on the back of the photograph describes the image as follows: “Inspection of work according to ‘points’ near the eye’” (ca. 1929-1930, photographer not identified). (MSS 12129. Image by Molly Schwartzburg.) 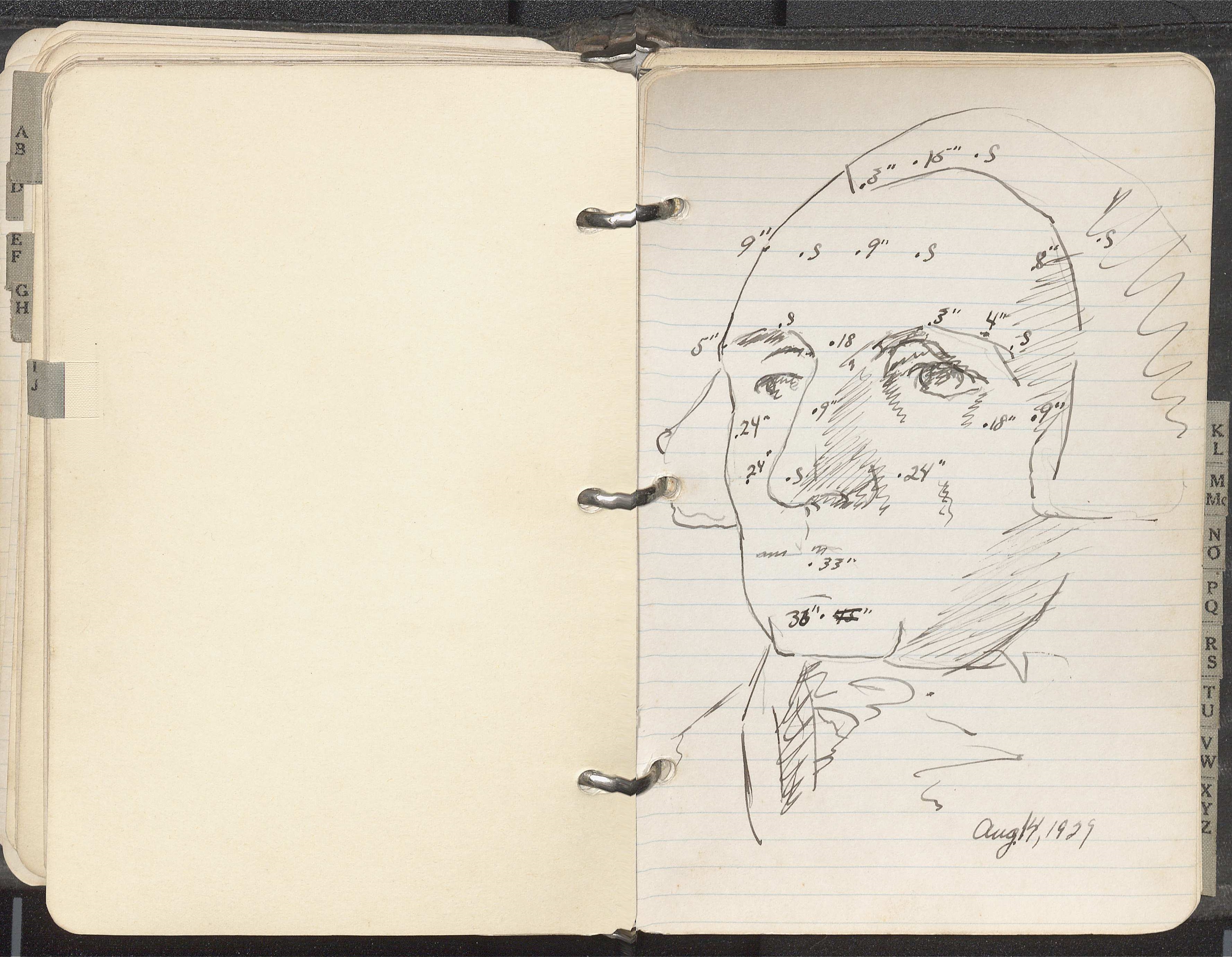 A drawing of the George Washington sculpture from a notebook kept by William S. Tallman from 1929-1932. The notebook contains diary entries, correspondence, lists of supplies, measurements, and diagrams from the Mount Rushmore project. (MSS 12129. Image by Molly Schwartzburg.)

T is for Celia Thaxter

Celia Thaxter, the nineteenth century American poet and story writer, grew up on and around the coast of New Hampshire. In her middle age, she became hostess of her father’s hotel on Appledore Island, and hosted many of the important writers of her time, including Ralph Waldo Emerson, John Whittier, Sara Orne Jewett, and Nathaniel Hawthorne. They in turn welcomed her into Boston’s literary world as a favored poet. A search of our online catalog shows 28 records relating to Celia Thaxter. 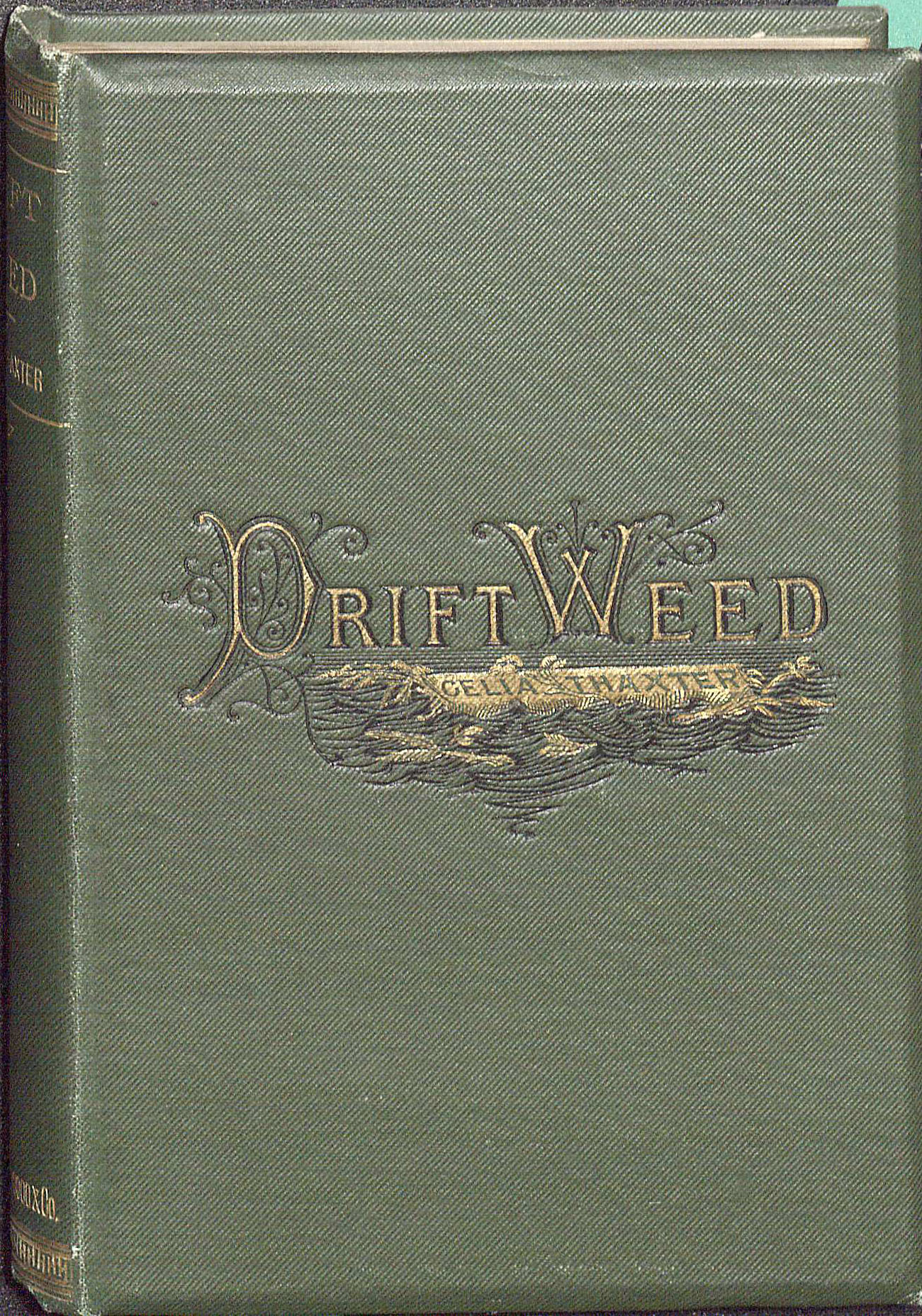 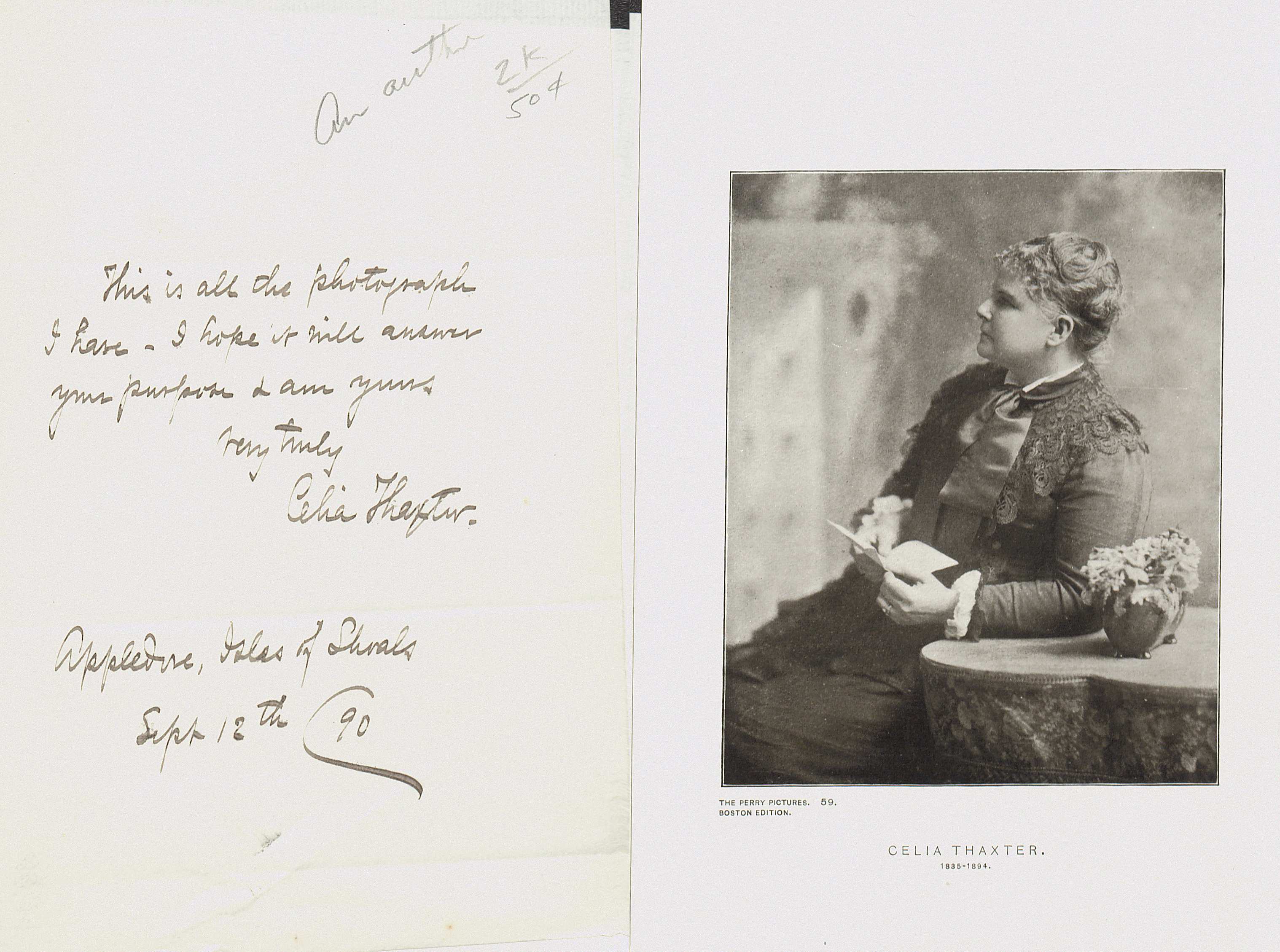 T is for the Treaty of Guadalupe-Hidalgo

Nicholas Philip Trist, Chief State Department clerk (and former secretary to Andrew Jackson and husband of Jefferson’s granddaughter Virginia), was appointed by President James K. Polk to negotiate a treaty to end the war with Mexico. While in Mexico, Trist ignored a recall from Polk and continued negotiations with the Mexican peace commissioners. The treaty was concluded at the city of Guadalupe-Hidalgo on February 2, 1848. On his return to the United States, Trist was dismissed from the State Department for insubordination and the government refused to reimburse his expenses until 1871. The terms of the treaty ceded an immense amount of Mexican territory to the United States including present-day California, Arizona, and New Mexico and parts of Utah, Nevada, and Colorado.

Contributed by Edward Gaynor, Head of Description and Virginiana and University Archives Specialist 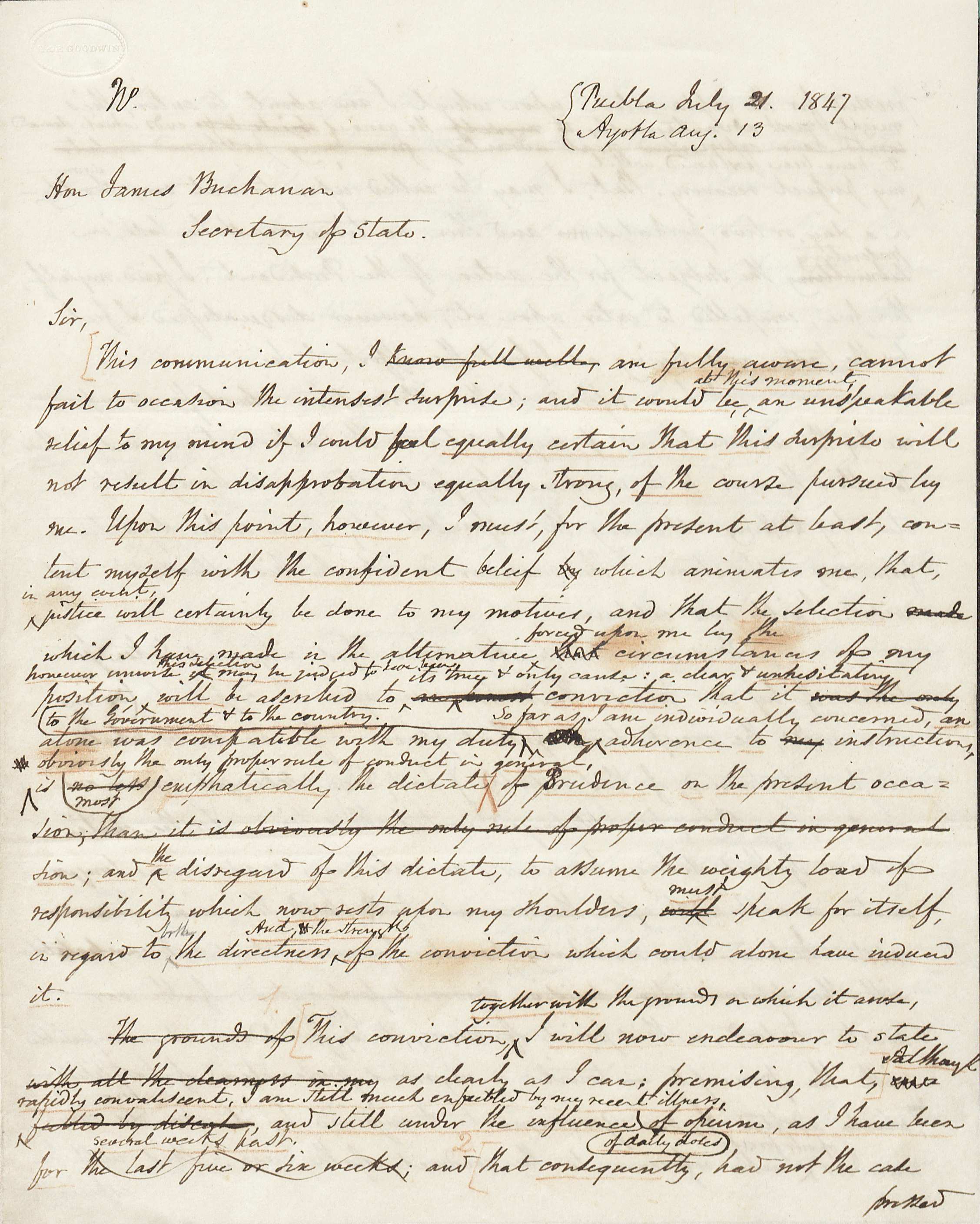 Letter draft from Nicholas Trist to James Buchanan, 1847 (MSS 5096-a. Deposit of the Thomas Jefferson Foundation. Image by Petrina Jackson) 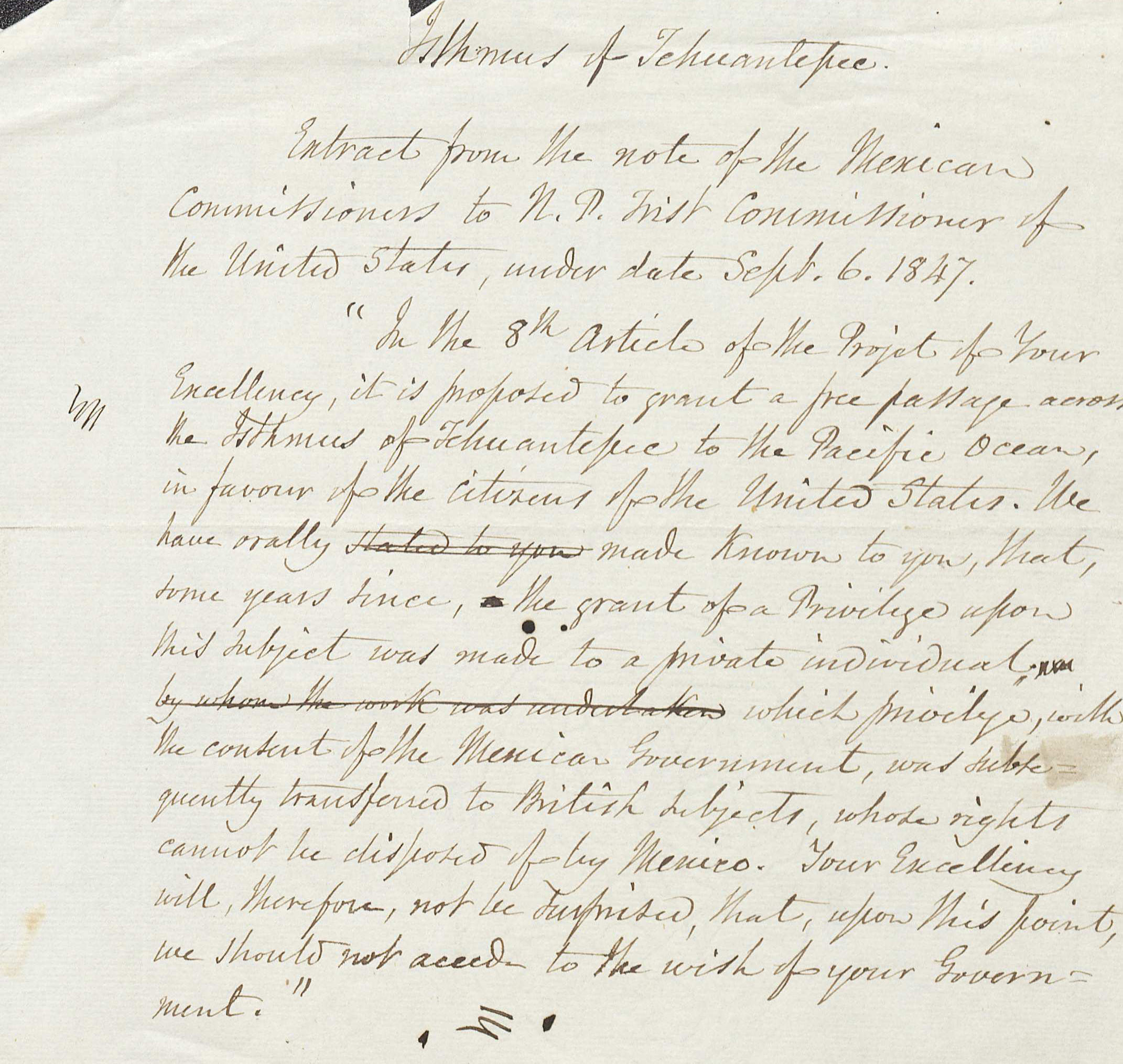 Extract from the note of the Mexican Commissioners, September 6, 1847. (MSS 5096-a. Deposit of the Thomas Jefferson Foundation. Image by Petrina Jackson) 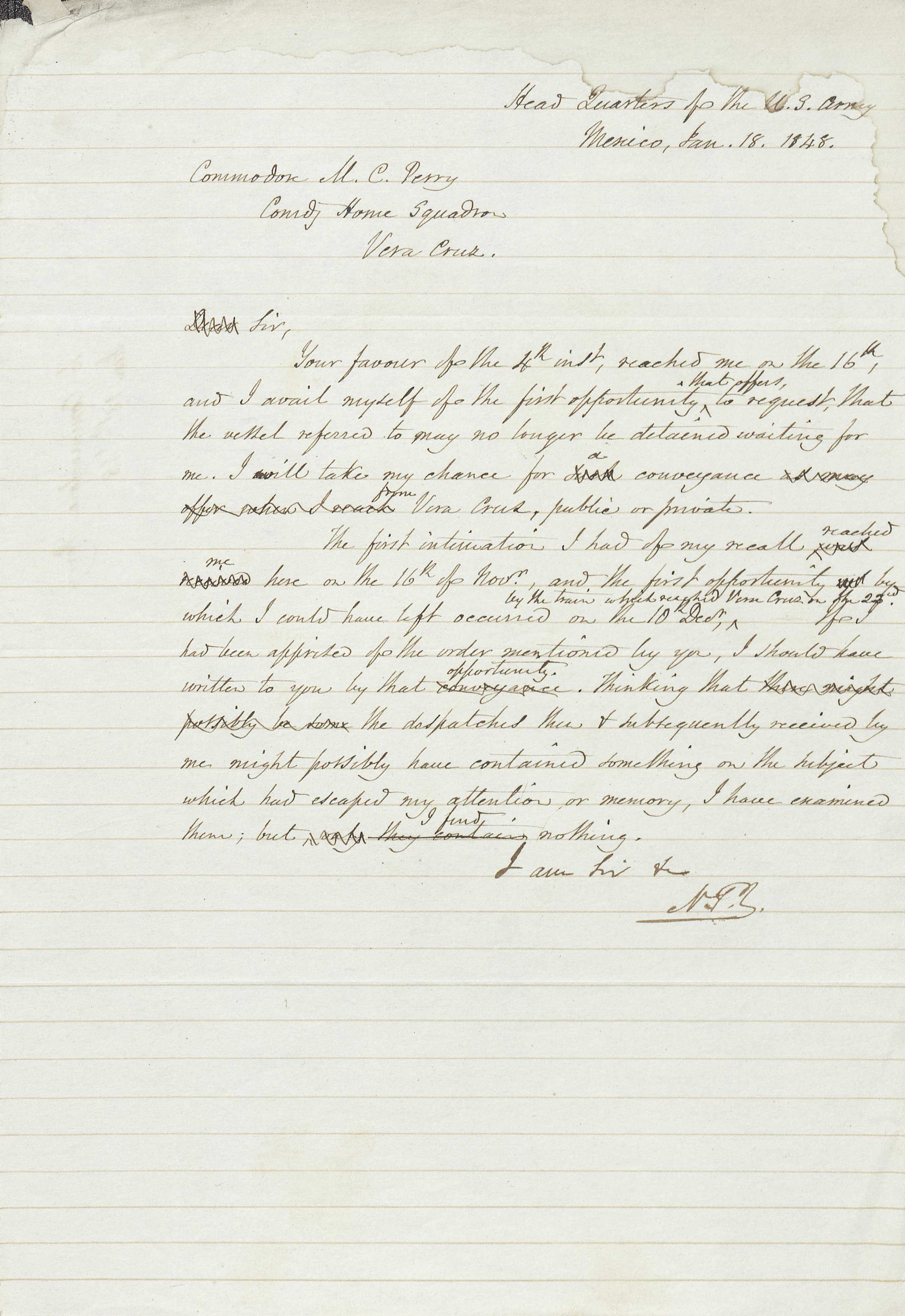 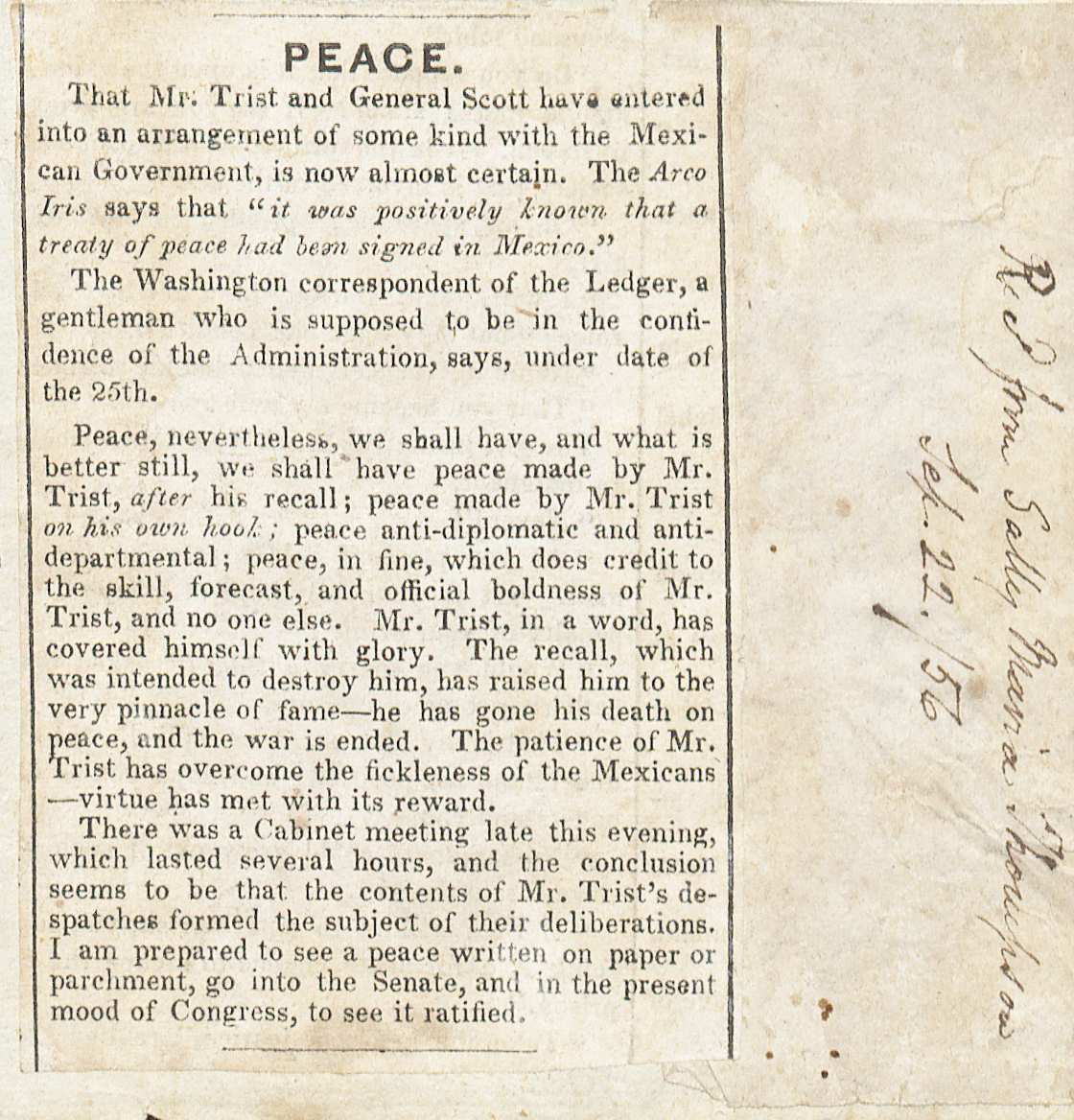 Newspaper clipping on the Mexican War peace settlement (MSS 5096-a. Deposit of the Thomas Jefferson Foundation. Image by Petrina Jackson)

That concludes the the letter “T.”  We can’t wait to show you the fantastic collection highlights when we feature “U”.

One thought on “ABCs of Special Collections: T is for…”