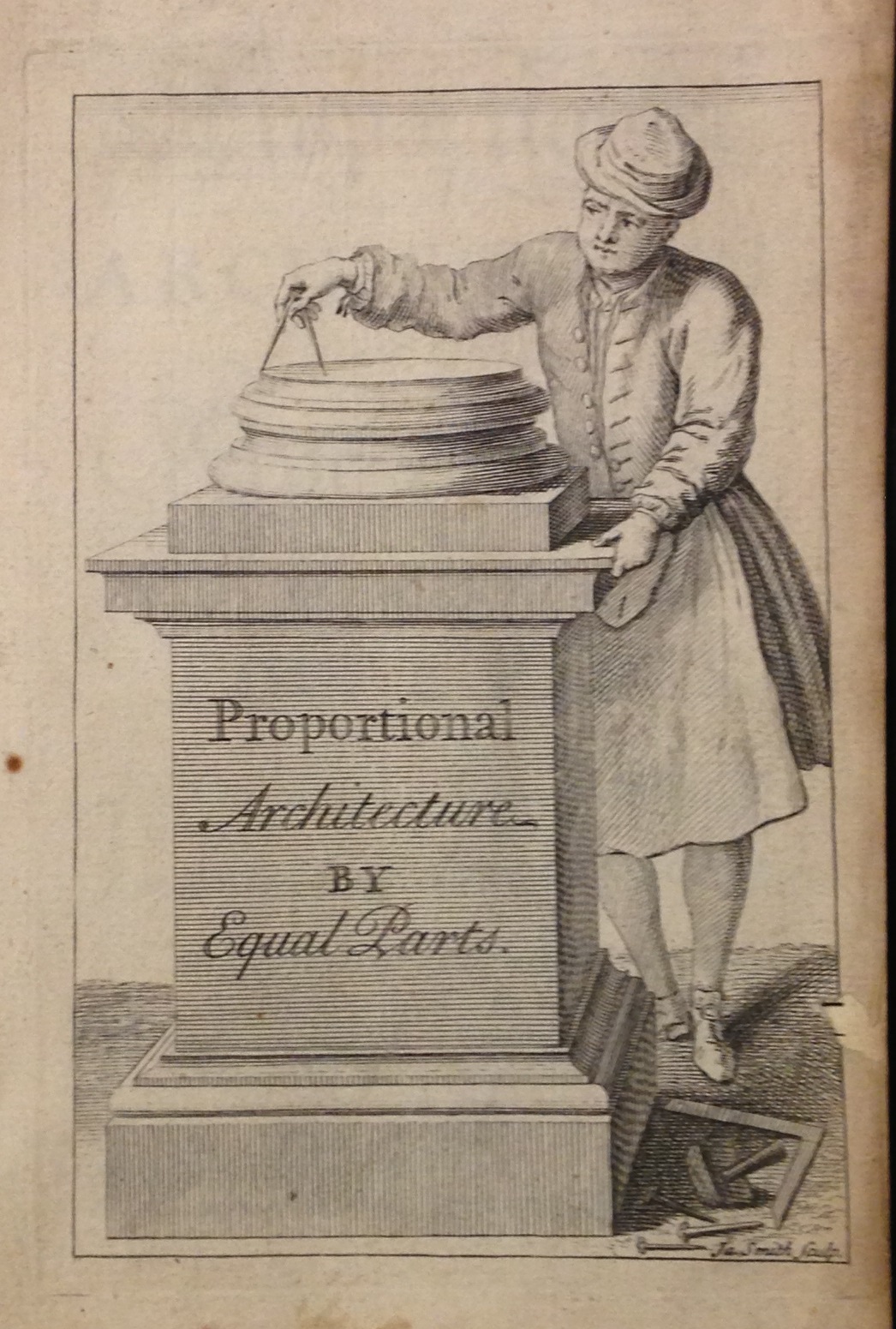 U.Va. has long been famous, not only for its Thomas Jefferson-designed Academical Village, but also for its highly ranked academic programs in architecture, architectural history, and landscape architecture. Supporting these programs has been a priority for the U.Va. Libraries, and strong collections are to be found in the Fiske Kimball Fine Arts Library as well as under Grounds in the Albert and Shirley Small Special Collections Library. Following is a sampling of our recent acquisitions in the field of architecture.

Given the thousands of books amassed by Thomas Jefferson for his personal libraries, it has never been practicable for U.Va. to replicate these collections. Since 1956, however, we have endeavored to reconstitute a small subset: the fine arts books that Jefferson selected for the original U.Va. Library collection (only 17 of which survived the 1895 Rotunda fire), plus the architectural titles found in Jefferson’s personal libraries. These total 130 in all, as fully described in William B. O’Neal’s checklist, Jefferson’s Fine Arts Library (Charlottesville: University Press of Virginia, 1976). With substantial support from the Thomas Jefferson Foundation and other sources, the U.Va. Library has managed to acquire copies of no fewer than 112 of the 130 titles— only 18 to go! (For the curious: our desiderata are O’Neal numbers 9, 11, 12, 16, 17, 31, 41, 43a, 50, 61a, 62, 65, 70, 74, 77, 79, 103, and 125b.) 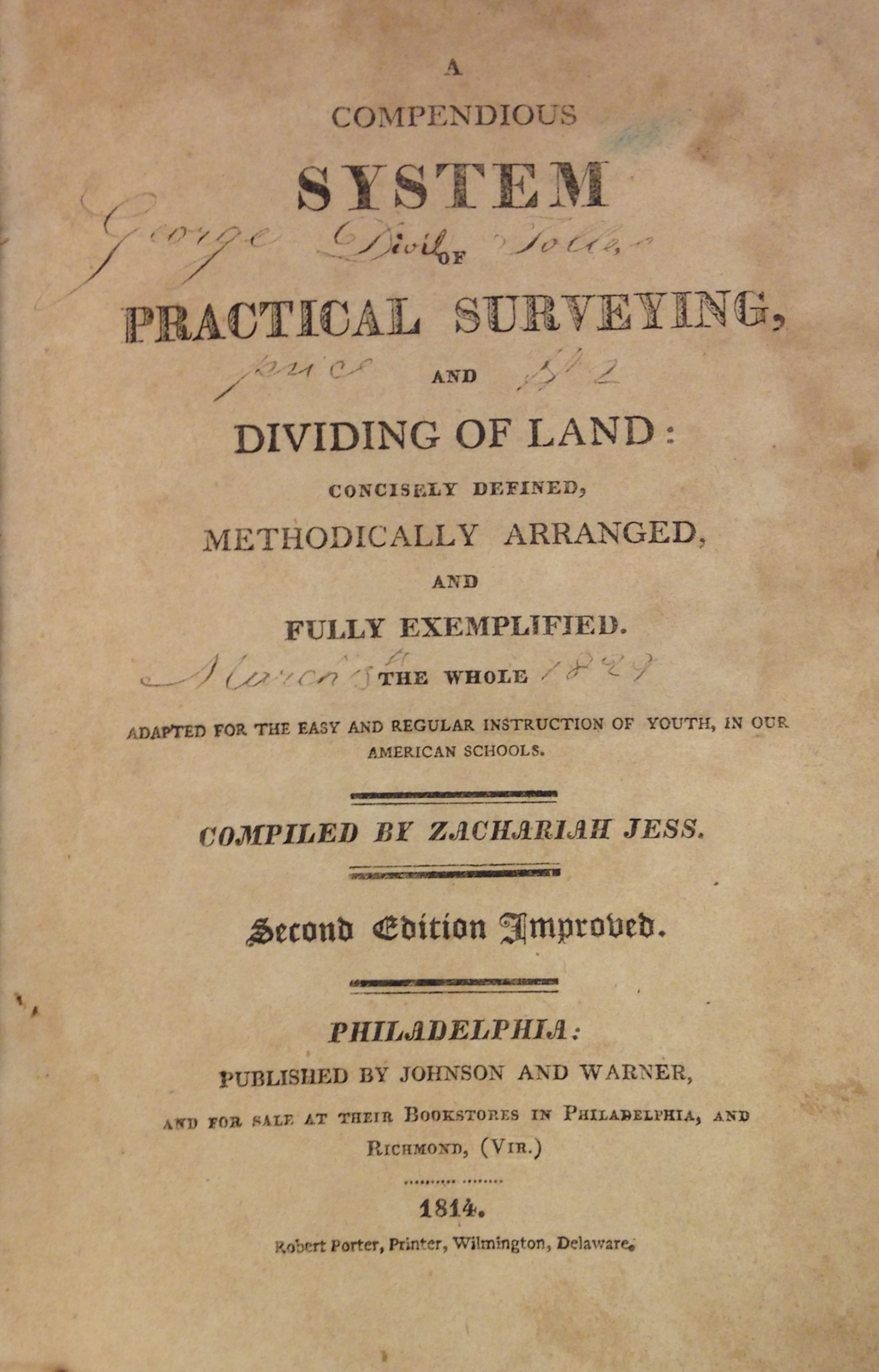 From time to time we search the Internet for available copies of O’Neal desiderata, and last month we were able to tick no. 57—the Philadelphia, 1814 edition of Zachariah Jess’s A Compendious System of Practical Surveying—off our list.  A copy of this edition was included in Jefferson’s final personal library, formed following the 1815 sale of his earlier library to the United States government. We know this because Jefferson’s remaining books were sold at auction, in Washington, D.C., in late February and early March of 1829; the printed auction catalog lists a copy of Jess as lot 414. An Internet search revealed a nice, reasonably priced copy being offered for sale by, of all places, a Nevada antiques shop. Intriguingly, the book was described as bearing a March 13, 1829 purchase inscription—could this possibly have been Jefferson’s own, untraced copy?! The purchaser, George D. Tolle, had indeed lived near Washington, D.C. in the mid-1820s, but further investigation revealed that he had relocated to Kentucky by 1829. A Jefferson provenance, alas, is unlikely. 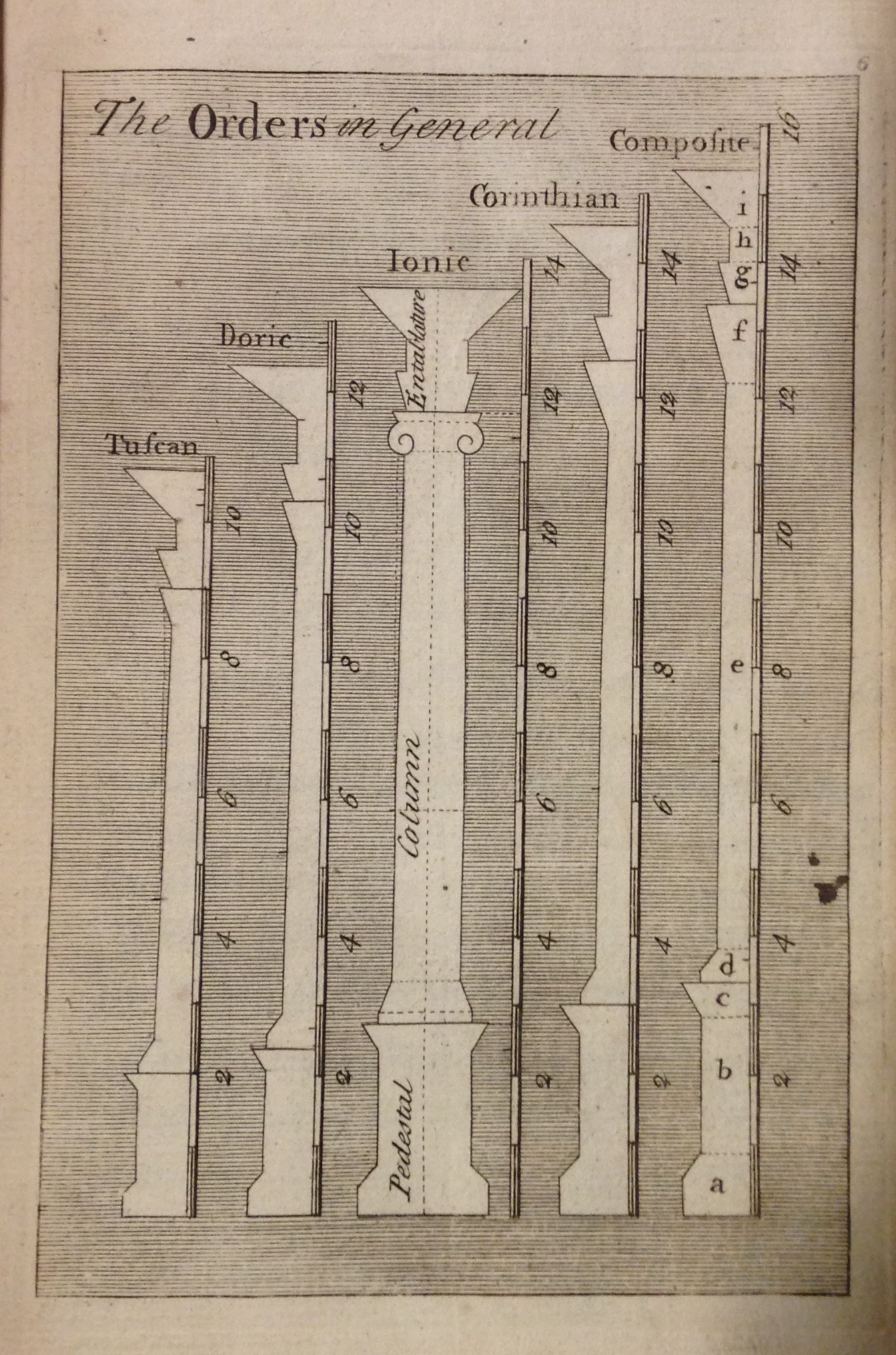 Even if not once owned by Jefferson, 18th-century architectural pattern books and manuals are of special interest to us. In an age when most structures were designed, not by architects per se, but by master builders and skilled amateurs (such as Jefferson), the books they drew upon for inspiration remain useful primary sources. William Robinson’s Proportional Architecture; or, The Five Orders; Regulated by Equal Parts, containing 32 leaves of engraved text and diagrams, was first issued in 1733. We recently acquired a fine copy of the second, pocket-size, edition of 1736, to which was added a 15-page letterpress glossary of architectural terms used in the work. With this book as a reference, a builder would know how to size architectural details in any of the five architectural orders. Robinson’s work remained sufficiently popular to merit a reissue in 1759. 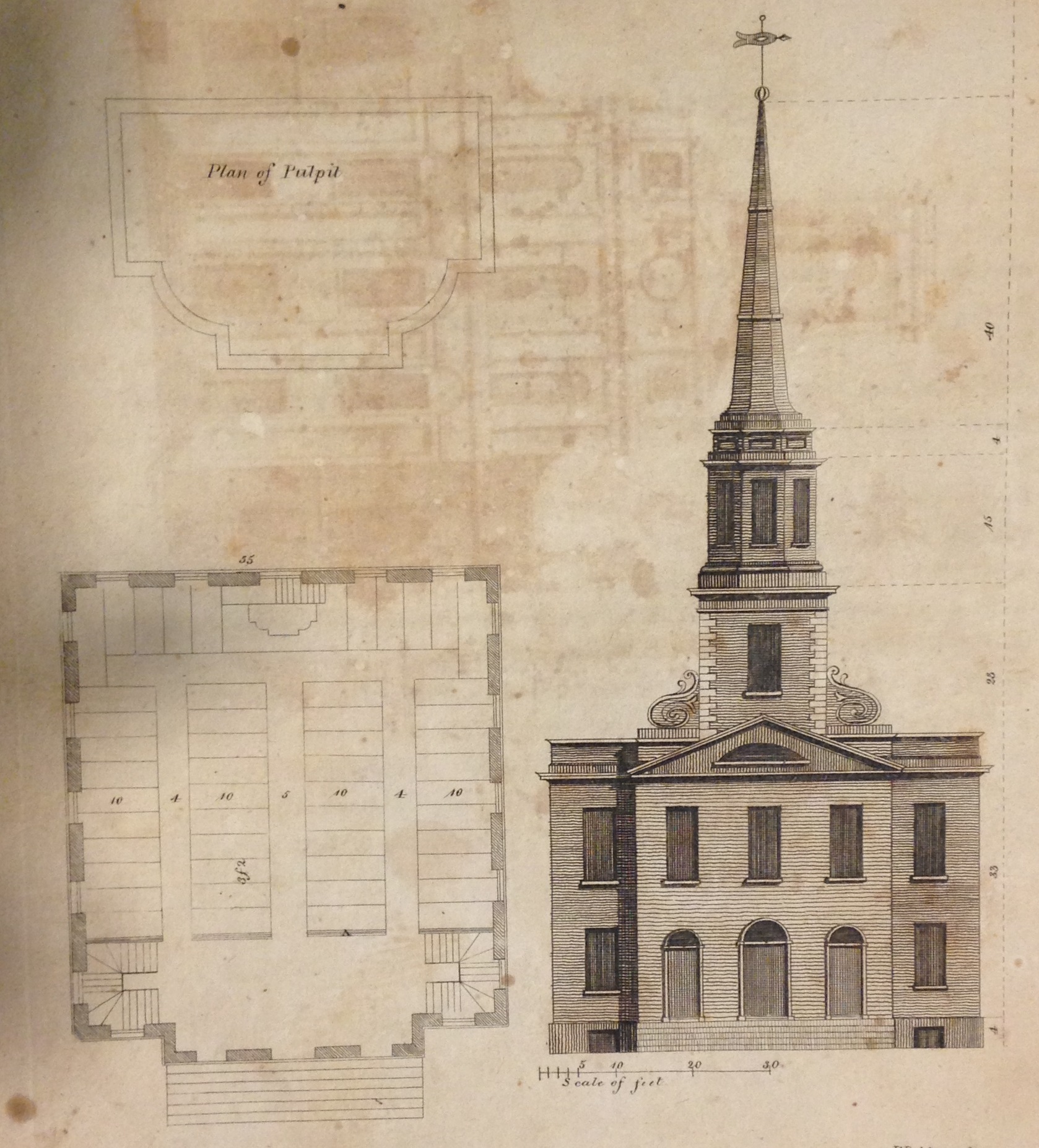 Plan and elevation for a “meetinghouse” by Asher Benjamin.

Greenfield, Mass., architect Asher Benjamin published the first original American architectural pattern book in 1797. The first edition of his profoundly influential (and very rare) Country Builder’s Assistant still eludes us, but recently we were able to acquire a copy of the 1798 second, expanded edition published in Boston. Benjamin’s work offered in its 37 engraved plates far more detail than in Robinson’s earlier handbook, and it was rapidly embraced by local builders. Indeed, many early 19th-century private homes and public buildings either designed by Benjamin or clearly based on his pattern book can still be found throughout New England. Benjamin soon relocated to Boston, where he published several other pattern books. 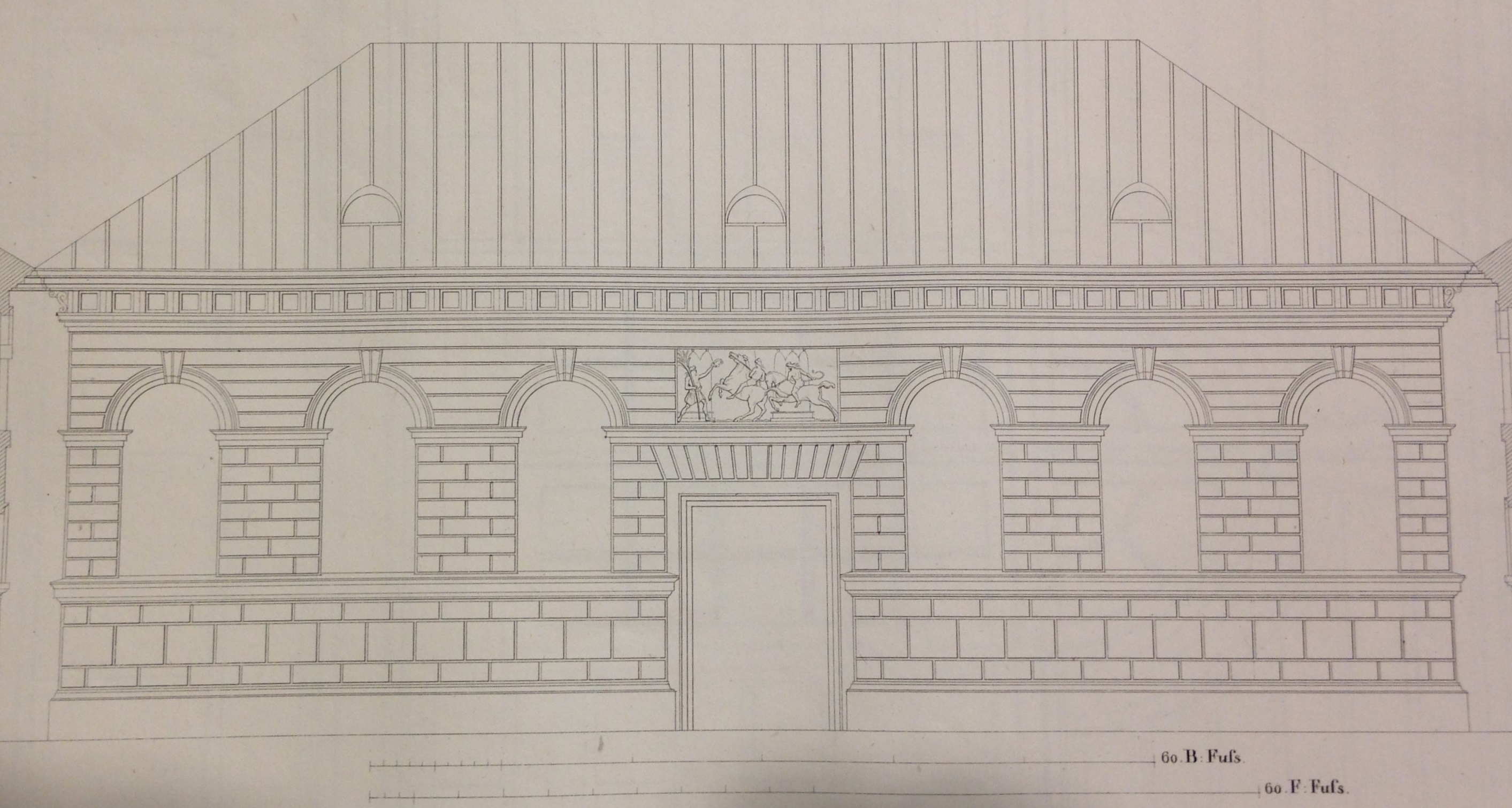 One may not think to consult our Marion duPont Scott Sporting Collection for architectural publications, but in fact it includes a small but significant holding of early works relating to the design and construction of equestrian facilities. The most recent (and now the earliest such publication) to be added is the only recorded copy of Jean Baptiste Metivier’s Grund-Plane, Durchschnitte und Facaden nebst Details der Reitbahm und Stallungen (Munich, 1836). Born in Rennes and trained as an architect in Paris, Metivier (1781-1853) spent most of his career in Munich, where several of his buildings may still be seen. This, his third and final publication, is a portfolio of 14 large lithographic plates depicting plans, elevations, and architectural details for the riding school and stable buildings commissioned by the Princely House of Thurn and Taxis. 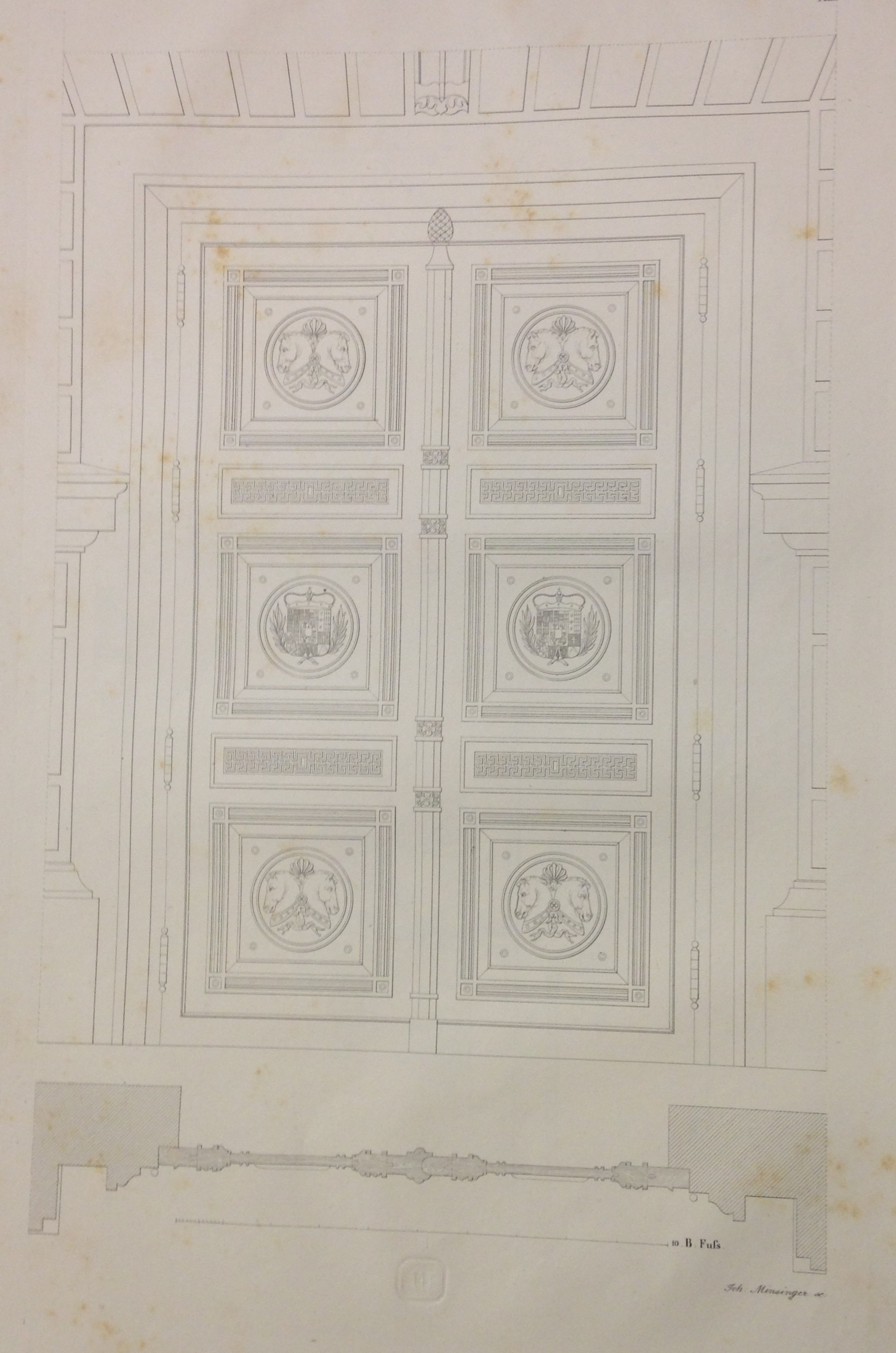