Welcome to our newest installment in the ABC series!  Today, we give you the letter… 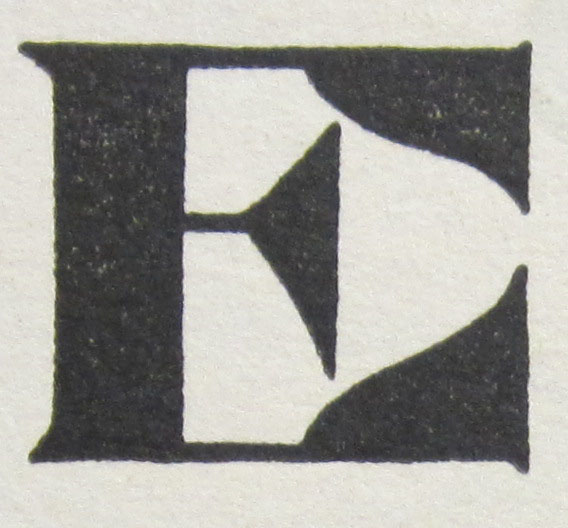 E is for Eccentric French, which is one of 75 alphabets represented in Frank H. Atkinson’s Atkinson Sign Painting up to Now: A Complete Manual of Sign Painting. Chicago: Frederick J. Drake & Co., 1915 (not yet catalogued. Gift of Nicholas Curtis. (Photograph by Petrina Jackson)

E is for Endpapers

With rare exceptions, endpapers are not part of the book as printed.
They are the double leaves (or pages) added at front and back by the binder,
the outer leaf (or page) of each being pasted to the inner surface of the
cover (known as the paste-down), the inner leaves (or free endpapers)
forming the first and last of the volume when bound or cased.

Contributed by Petrina Jackson, Head of Instruction and Outreach; text from the Online Books Page: ABC for Book Collectors by John Carter  http://onlinebooks.library.upenn.edu/webbin/book/lookupid?key=olbp43199 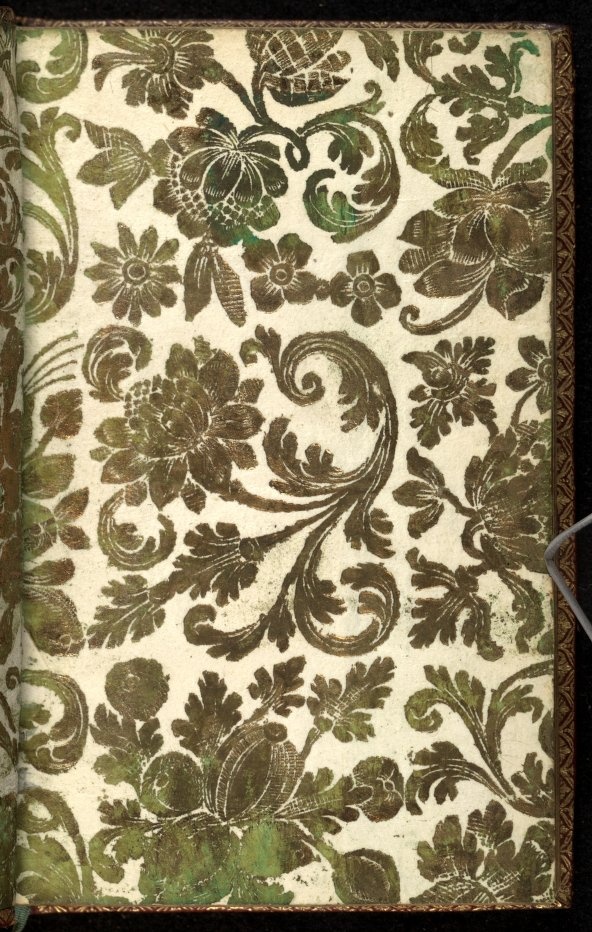 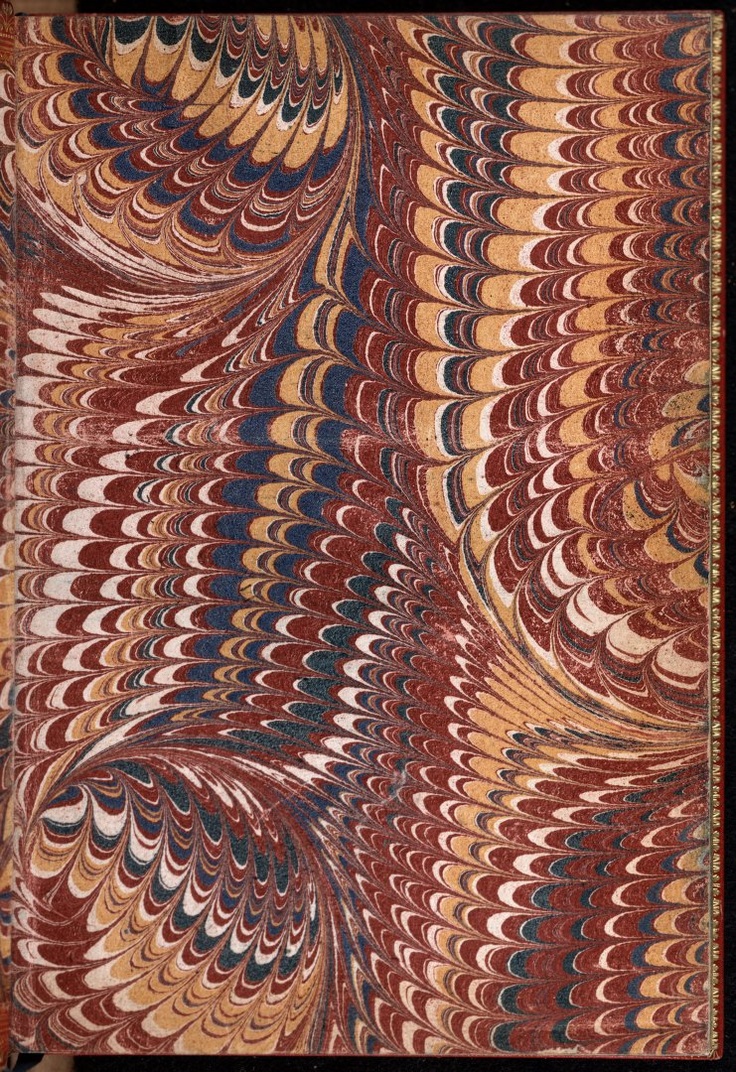 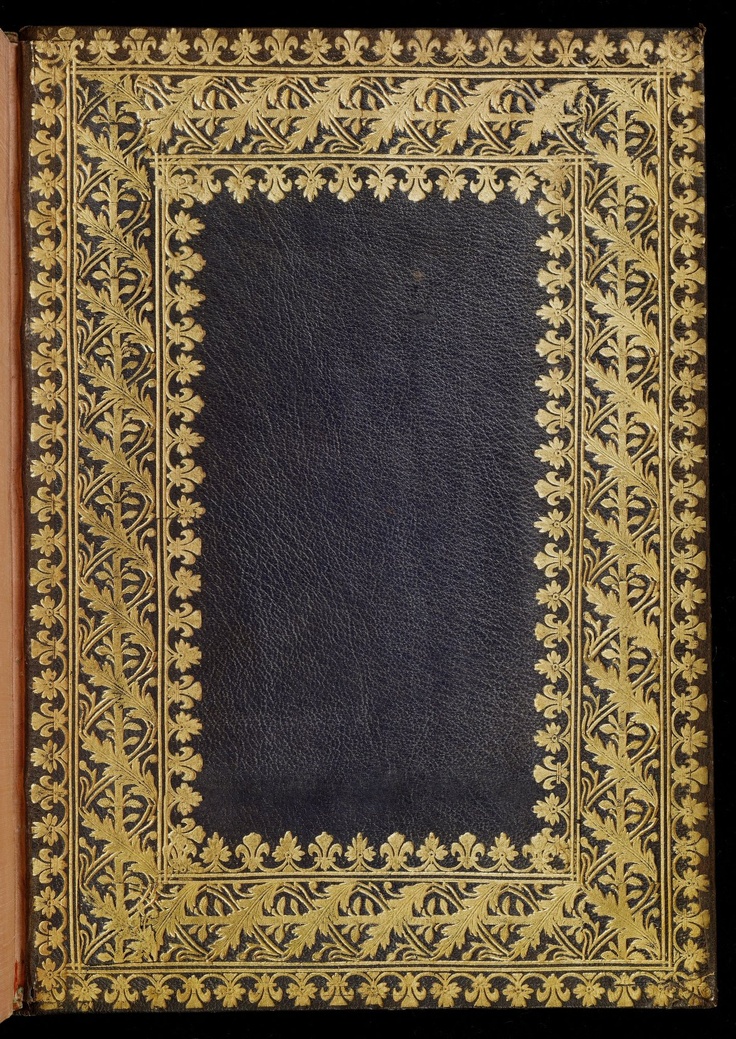 E is for Engraving and Etching

E is for Engraving and Etching …the difference?  “A useful analogy is to imagine the surface of the paper as a thin layer of snow on a frozen pond.  The engraver is limited to making lines with the edge of a skate; the etcher can draw with a pointed stick”, notes author Bamber Gascoigne in How to Identify Prints.   The engraver incises a design into a metal plate, allowing for highly detailed renderings.  The etcher scratches an image into a wax coating, and then the design is bitten into the plate with acid, allowing the artist more creative freedom. 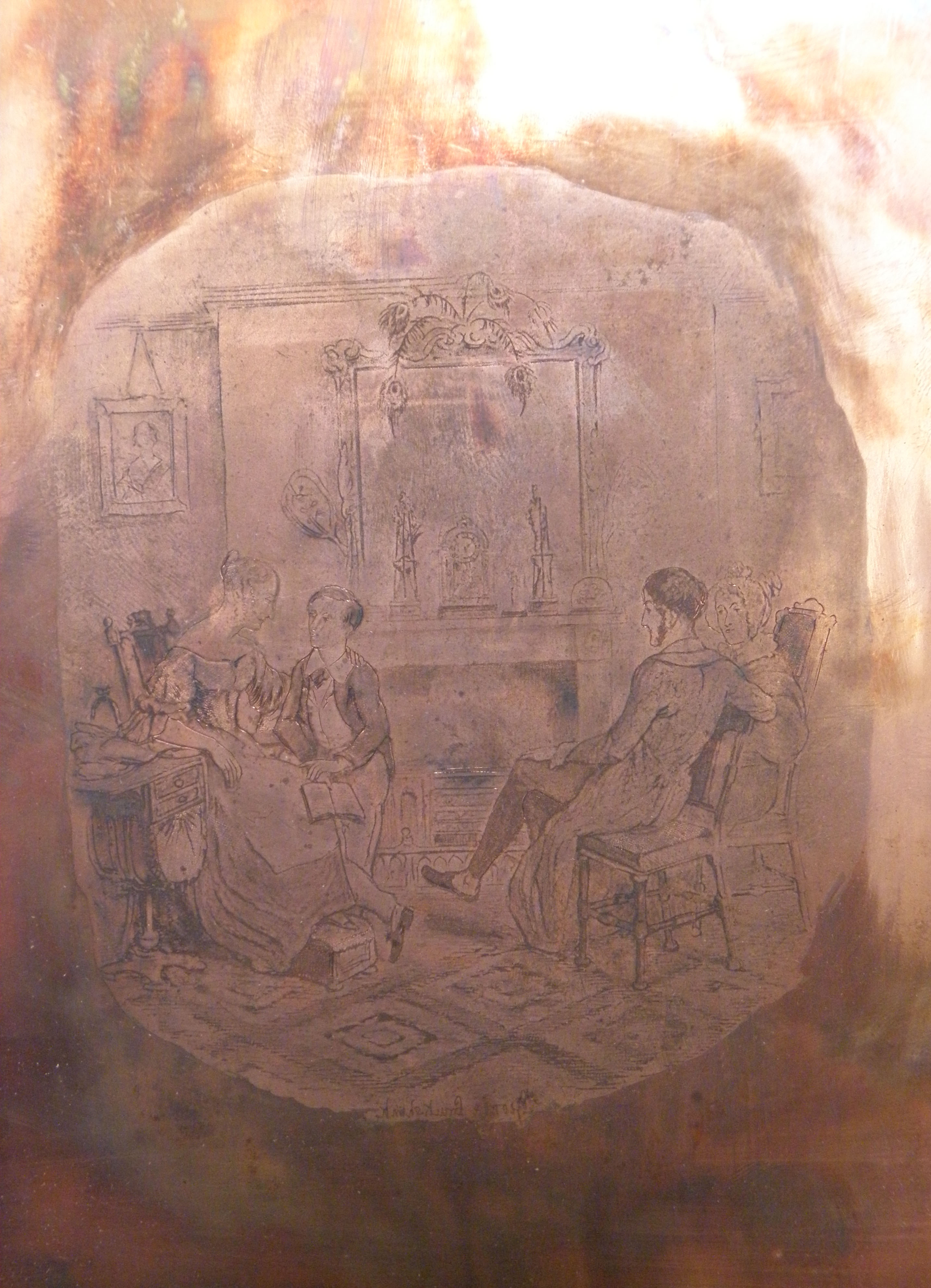 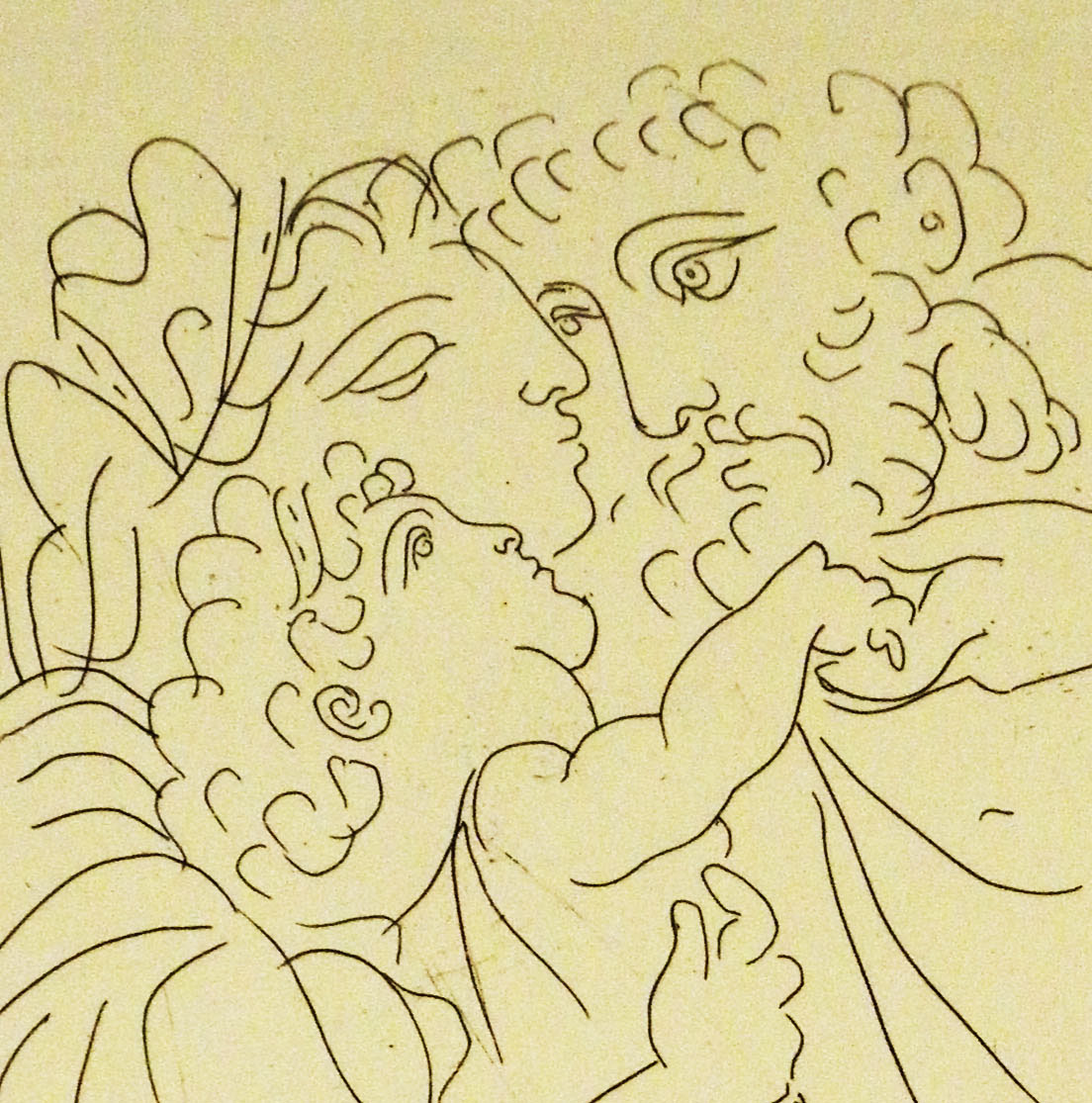 Detail of an etching from Six Signed Proofs of Original Etchings of Pablo Picasso: Made to illustrate an edition of Aristophanes’ Lysistrata, 1934. (ND553 .P5 1934. Gift of T. Catesby Jones. Photograph by Donna Stapley.) 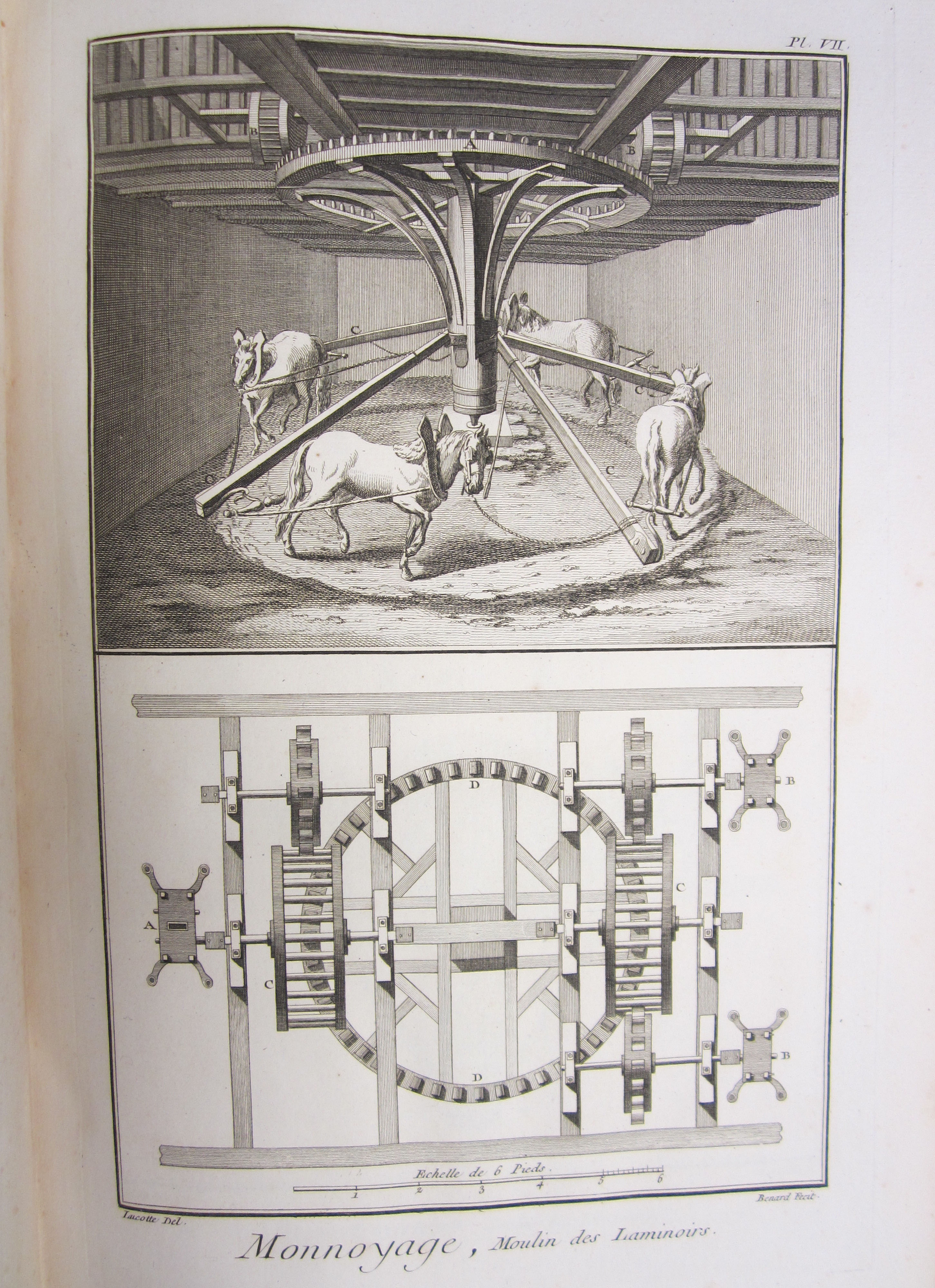 E is for the Eliot Bible

The Eliot “Indian” Bible was published in 1663, the first Bible printed in America. The Holy Bible: Containing the Old and the New Testament was translated into the Algonquin language by Puritan minister John Eliot, who was assisted by a young Native American. The first complete English edition of the Bible was not printed in North America for another 120 years. 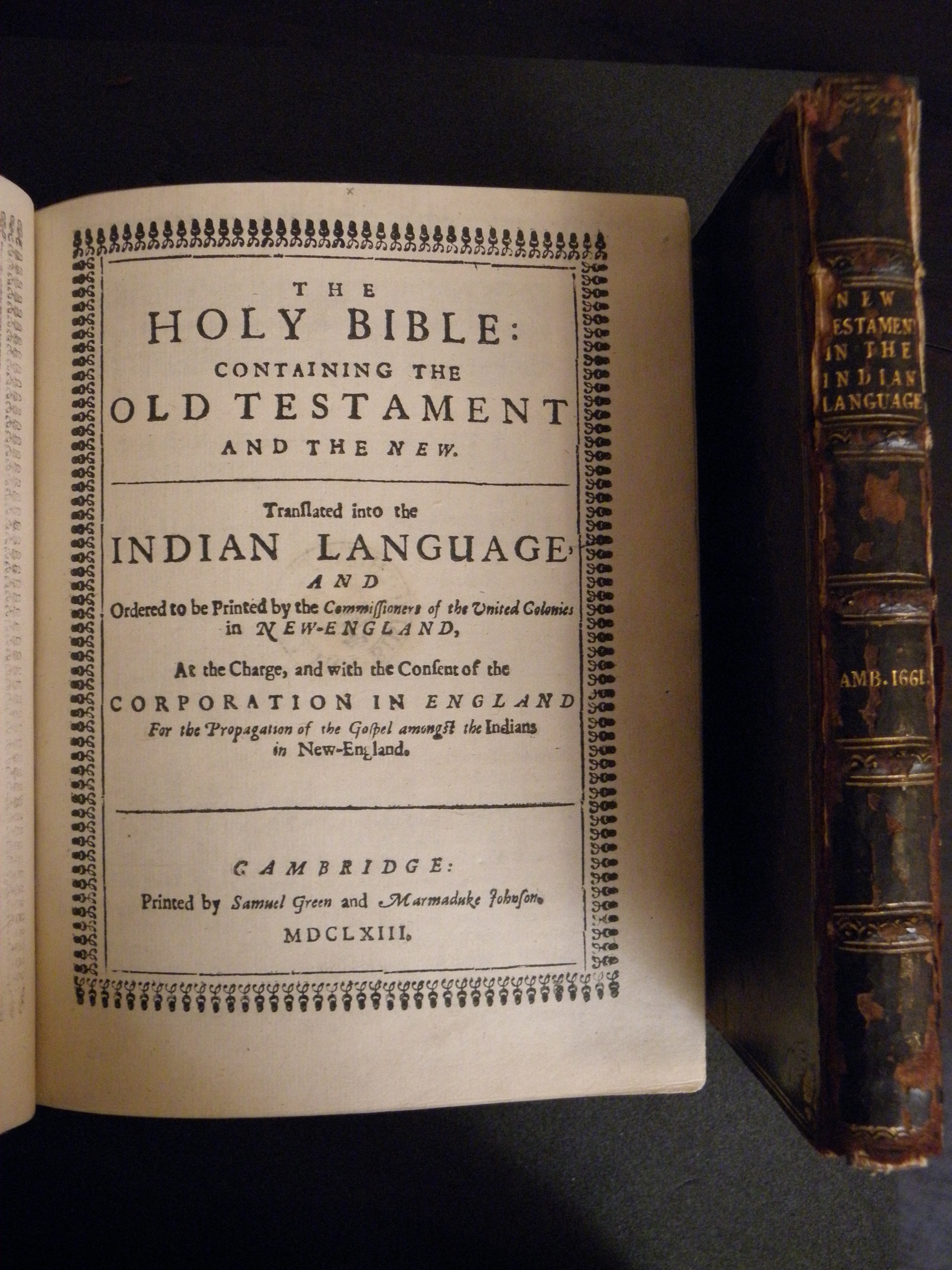 Title page of John Eliot’s The Holy Bible: Containing the Old Testament and the New and the spine of his New Testament translation into the Algonquin language. (A 1663 .B53 and A 1661 .B52, respectively. Tracy W. McGregor Library of American History. Photograph by Donna Stapley) 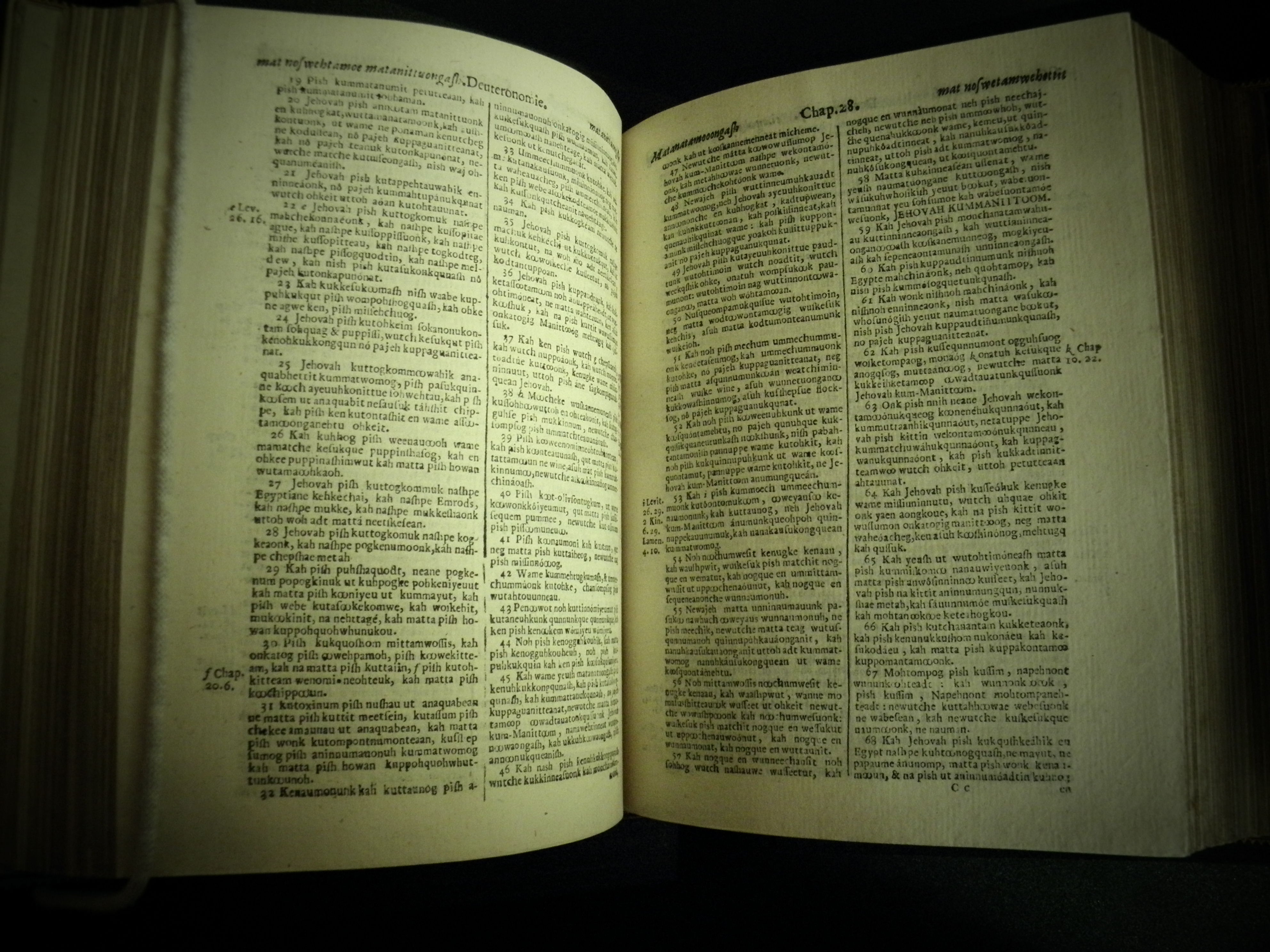 First edition of the Eliot Bible opened to the book of Deuteronomy. (A 1663 .B53. Tracy W. McGregor Library of American History. Photograph by Donna Stapley)

E is for William Everson

William Everson, also known as ‘Brother Antoninus,’ or the ‘Beat Friar,’ was a poet, critic, and small press printer. Meeting like-minded poets during his World War II stint as a conscientious objector, Everson became an influential member of the San Francisco Renaissance during the late 50’s, 60’s and 70s. Much of his critical work focused on Robinson Jeffers, and his Lime Kiln Press printed a number of notable editions, most famously Granite & Cypress in 1975. 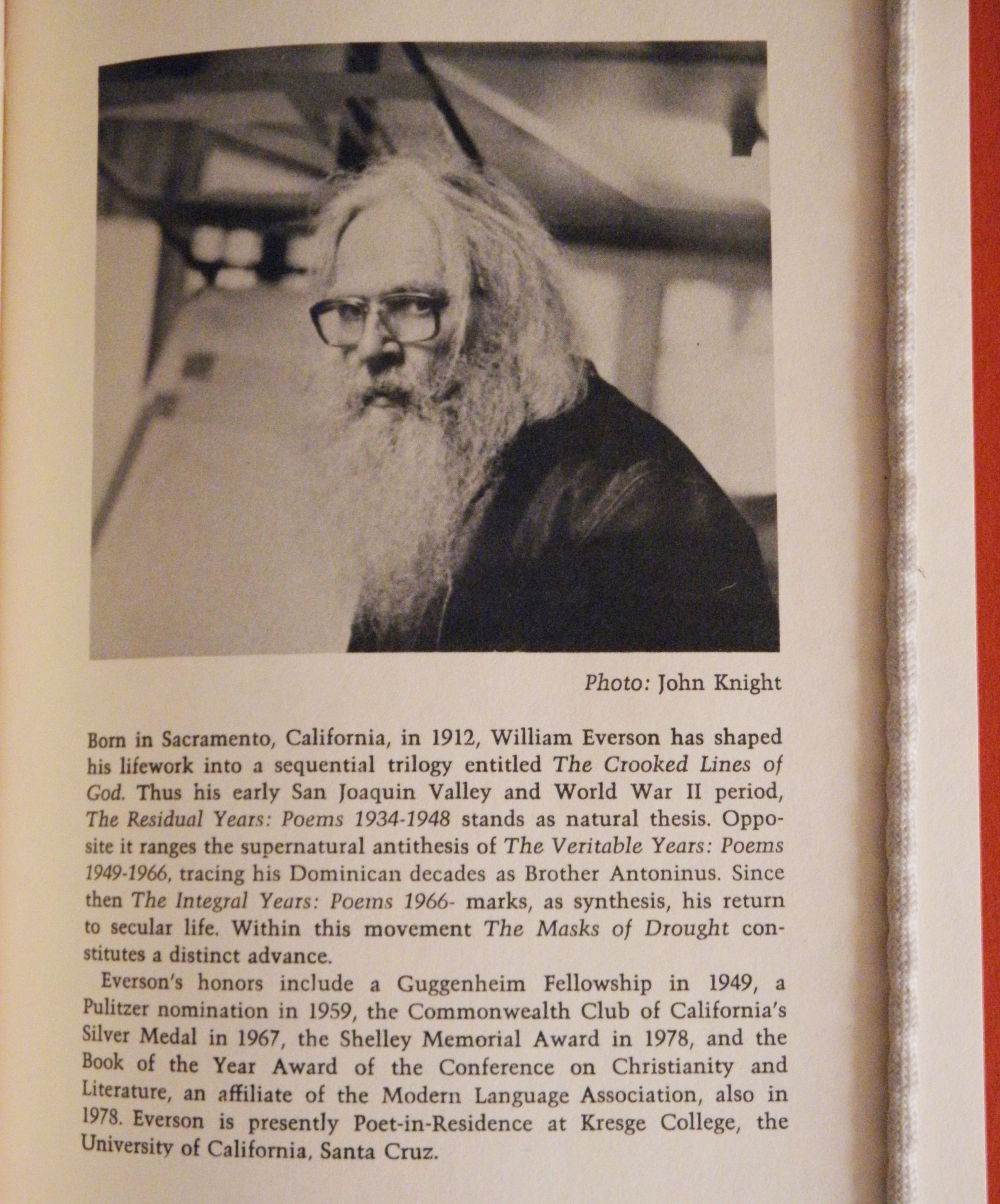 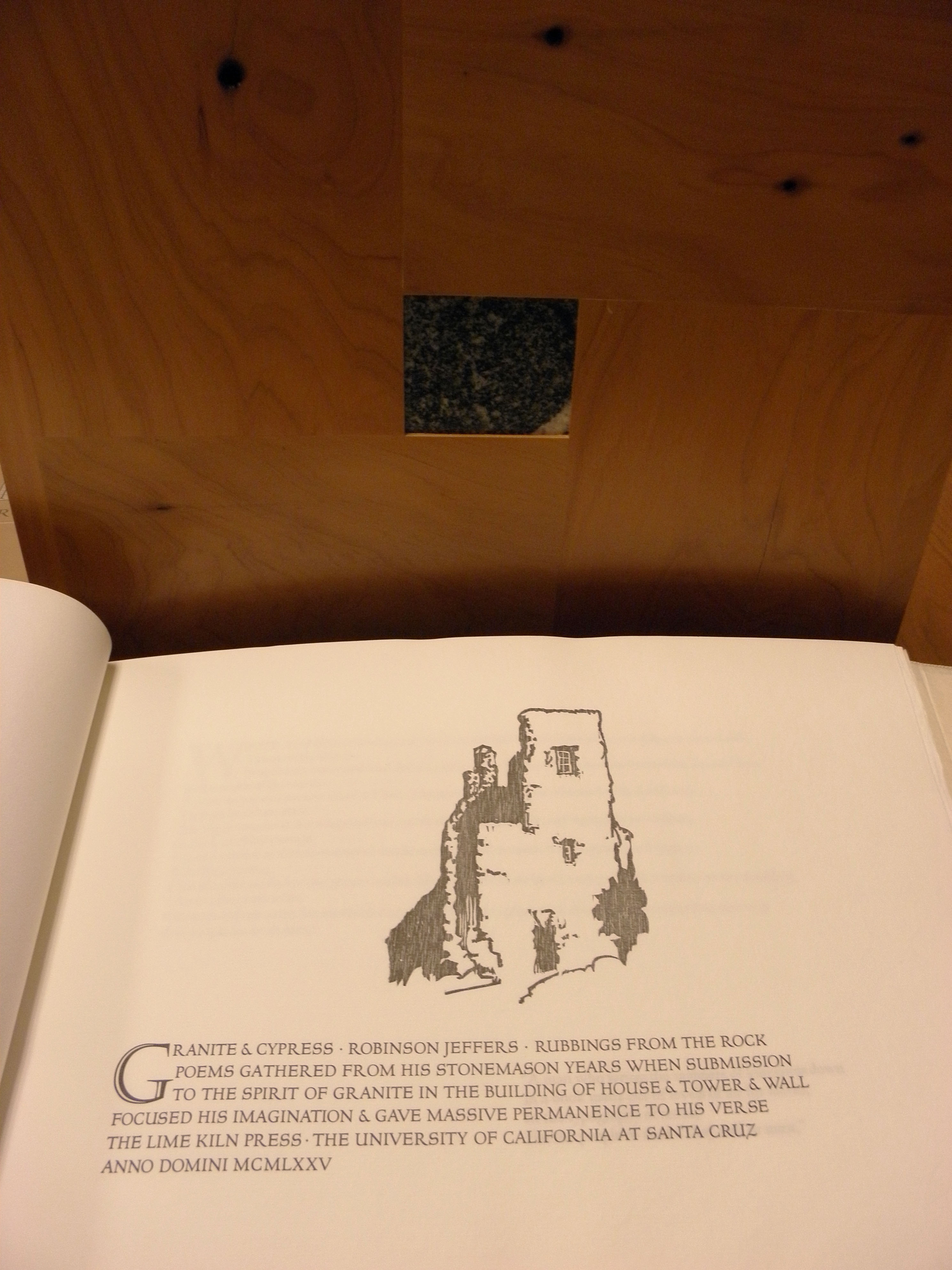 Title page of Granite & Cypress by Robinson Jeffers. According to our catalog records, “One hundred copies of this book have been printed under the direction of William Everson. The title page woodcut is by William Prochnow … Binding [of German Naturegewebe and spine open-laced with deerskin rawhide] is by The Schuberth Bookbindery of San Francisco. The slip-case, fashioned by one who prefers to remain anonymous, is of Monterey Cypress. Its window of granite is from Jeffers’ own stoneyard ” (PS3519. E27 G7. Photograph by Donna Stapley.)

That is all for now.  Please join us in two weeks when the featured letter is F!

One thought on “ABCs of Special Collections: E is for”