When we here at the Small Library think about new materials we would like to add to our collections we take many factors into consideration: the research quality of the content, connections to the University’s curriculum or history, or alignment with our core collecting areas. Given the breadth of subject, time period, and format of our collections we often come across materials that will complement or counterpoint something we already own, even though at first glance it might not seem to fit with everything else.

Such is the story of how we made our newest acquisition, the Charlottesville Derby Dames Records. The Dames are a non-profit women’s sport club here in Charlottesville founded in 2007. My day-job at the library is Digital Archivist, but on the flat-track I am known as “Grëtel vön Metäl.” When I mentioned one day that I was going to be skating with the Dames in an upcoming match (called a “bout” in derby parlance), our current Head of Technical Services, Edward Gaynor, immediately suggested that a collection of Dames materials would make an excellent complement to our collections of the papers of various local and regional “ladies’ clubs” such as The Garden Club or the Ladies’ Sewing Society. When researchers come to the Reading Room to look at these collections they are usually studying the ways in which women construct their identities in public: how do they present themselves? what kinds of activities do they become involved in? what can these things tell us about women’s roles? 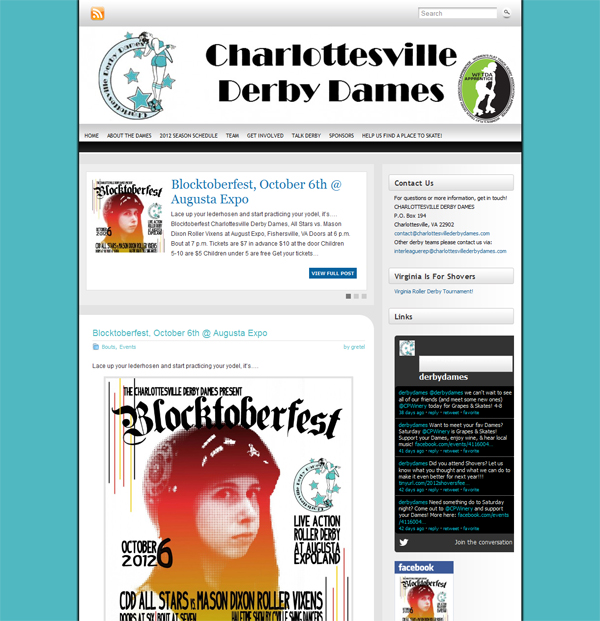 A screenshot of the Dames’ website, ca. 2012 (MSS 15490). Compare with the Team’s current page: http://www.charlottesvillederbydames.com.

The sport of roller derby began in the late 1800s as endurance skating races. They were a popular activity for both sexes until entrepreneurs Leo Seltzer and Damon Runyon formed professional leagues featuring women in the 1930s and added elements of competition and physical contact. The sport was immensely popular, a staple of television, until the 70s. While the fights were often staged, the women skaters were skilled athletes. 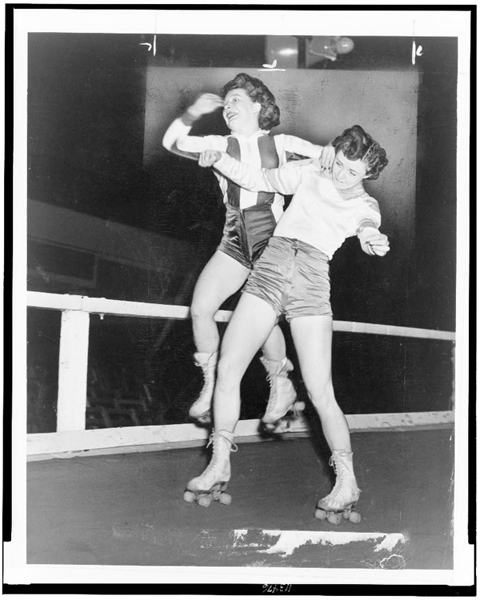 Roller derby in the fifties was pretty rough and tumble, but skaters wore no protective gear (image courtesy of the Library of Congress, Prints and Photographs division: http://www.loc.gov/pictures/resource/cph.3c13476/)

Roller derby began its resurgence in the early 2000s in Austin, Texas. Doing away with the traditional banked track and playing on a flat oval made it easier to find a place to skate – anywhere you can find a big flat space, you can play roller derby (although a few leagues still use a banked track). The game quickly spread across the country and even across the globe. By 2013 over 1,200 leagues had formed on every continent but Antarctica, and men’s, junior’s, and co-ed leagues are growing in numbers as well.

Derby has a growing fan-base, and an even more passionate following among those who play it. Women’s roller derby is especially known for the colorful personas adopted by players, symbolized by their adopted “Derby Names.” The sport itself requires a high degree of athleticism combining strength, endurance, skill, and strategy, but on the flat track skaters can be as menacing (Soulfearic Acid), tough (Punky Bruiser), flirty (Sexy Sladie), or playful (Snot Rocket Science) as they want to be. 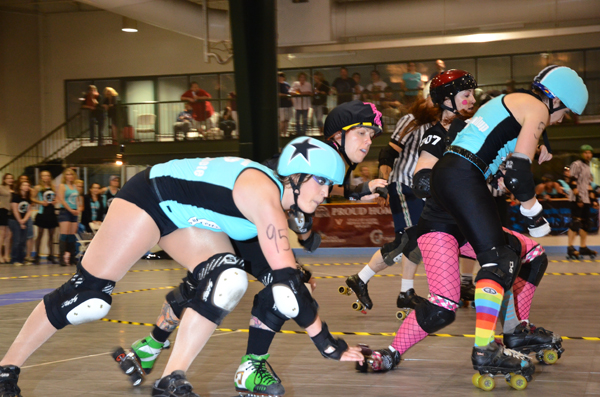 Today the Dames play with helmets, knee and elbow pads and wrist guards. This photo is from a bout in 2012 at Charlottesville’s Main Street Arena against the Charm City Rollergirls of Baltimore, Maryland (MSS 15490. photo by Dan Purdy).

The newly acquired Derby Dames collection here at UVa is unusual in more than just its subject. It was also a chance for us to acquire a modern collection composed almost entirely of electronic materials. As the Dames have only just recently formed, all of our operational documents, promotional material, and ephemera are created as electronic documents and most are never printed. While the library has collected about 30 posters, handbills, programs, and other ephemera, we’ve also collected more than 12,000 electronic documents including bylaws and policies, meeting minutes, graphics, photos, video, and websites.

I worked with the Dames to download a copy of all of the team’s working files from a shared Google Documents folder. These files were immediately copied for safe keeping and stored on an external hard drive. Next, I used specialized software to create listings of all of the files present and some technical details of each. A key piece of information is what’s called a “checksum” – a kind of digital fingerprint in the form of a numerical code created by running an algorithm on the contents of a file. That file and only that particular file will create that particular checksum. This allows me to verify that files haven’t been corrupted or tampered with over time.

After organizing and removing duplicates from the collection, I uploaded the new collection to networked library storage and created a finding aid. Future work will include creating a searchable, online archive of the documents (access will be available on Grounds in the Reading Room initially) and working with the Library IT department to ensure the long-term preservation of the content within the Library and University’s larger IT infrastructure. This work will not only ensure the future access to the Derby Dames collection, but will pave the way for more electronic collections to come.