From time to time the Small Special Collections Library receives a transformative gift that reshapes its collections and collecting in unexpected, unusual, and ultimately very beneficial ways.  One such gift was the 1985 bequest of the Marion duPont Scott Sporting Collection.  A direct descendant of E. I. du Pont de Nemours (founder of the eponymous chemical company), Marion duPont Scott (1894-1983) was an internationally renowned horse breeder and equestrian who lived for many years at Montpelier—once the home of president James Madison—some 25 miles northeast of Charlottesville.  She also formed a major collection of sporting literature—especially books, manuscripts, and periodicals relating to horses and horse-racing (though sports such as fishing, hunting, even cockfighting, are also represented)—that was entrusted to the U.Va. Library.  Accompanying the 1,200-item gift was a generous acquisitions endowment that has so far enabled us to more than double the collection’s size. 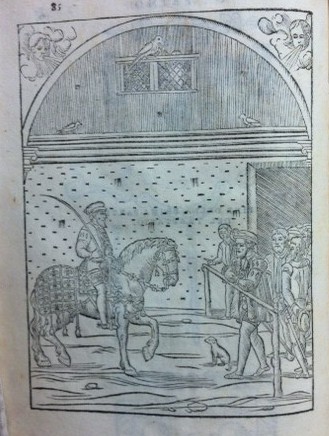 How does one build such a collection in ways that not only honor the donor’s wishes but enhance its value to U.Va. and the international research community?  The challenge has been an exciting one, for sporting and horses are subjects that permit us to forge stronger connections between the Scott Collection and our other diverse holdings.  Here are a few examples drawn from many recent Scott Collection acquisitions. 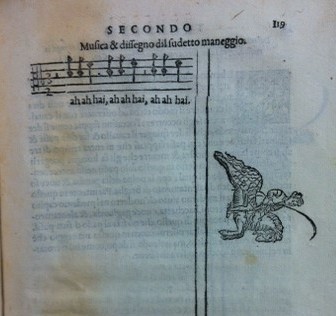 We were able to obtain at auction a fine first-edition copy of a classic sixteenth-century work on horsemanship: Cesare Fiaschi’s Trattato dell’imbrigliare, attegiare, & ferrare cavalla, published in Bologna in 1556.  This book now takes pride of place as the earliest work in the Scott Collection.  Master of a famed riding academy founded in Ferrara in 1534, Fiaschi distilled in his book a lifetime’s knowledge concerning the training, equipping, and shoeing of horses.  The work is also a notable example of early Italian book illustration, filled with dozens of woodcuts depicting bits, bridles, and horseshoes. Of particular note are the unusual diagrams mixing horse, rider, and music, which accompany Fiaschi’s famous explication of why tempo and rhythm are crucial to expert riding. 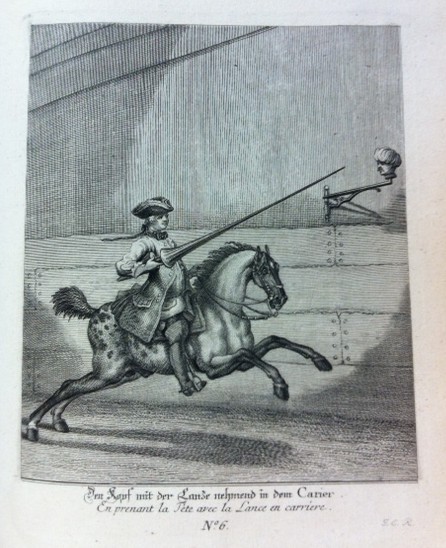 During the late 18th and early 19th centuries, some of the finest color-plate books ever created were published in England.  These works, which embraced a wide range of subjects, typically were illustrated with hand-colored aquatint plates.  One of the most popular English illustrators working in the genre was Henry Thomas Alken (1785-1851), who combined a gift for caricature and love of sporting to illustrate many notable works on horse racing, fox-hunting, and other sports.  The Scott Collection contains copies of nearly half of Alken’s sporting books, many of which are quite rare, and we are actively pursuing the remainder.

A one-foot section from Henry Alken’s panorama, A trip to Melton Mowbray (London, 1822), which is 26 feet in length.

Our latest Alken acquisition is his delightful A trip to Melton Mowbray, published in 1822.  This 26-foot-long panorama consists of 14 hand-colored aquatint plates pasted together end-to-end and was originally issued wound around a wooden spindle.  In our copy the plates have been separated and mounted in an album for easier viewing.  The Leicestershire town of Melton Mowbray, known for its pork pies and Stilton cheese, has for centuries also been famous as a fox-hunting mecca.  In this work Alken imagines first the comic misadventures of a sporting party journeying from London to Melton Mowbray, and then its participation in the hunt. 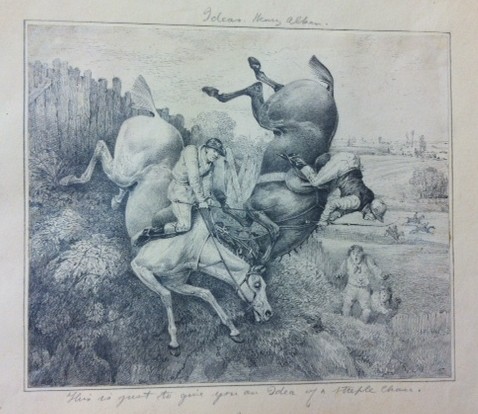 One of two newly acquired pencil drawings by Henry Alken for his book, Ideas, accidental and incidental to hunting (London, ca. 1826)

As fine as they are, the color-plate works cannot do proper justice to Alken’s artistry, for something is inevitably lost in the process of translating his exquisite line drawings into the tonal process of aquatint.  Hence we were delighted to acquire two original Alken pencil drawings made for another sporting book: Ideas, accidental and incidental to hunting and other sports (ca. 1826).  By placing the drawings side-by-side with Alken’s books, we can teach in the most effective way possible both Alken’s remarkable artistry and the manner in which etchers translated his work to aquatint plates. 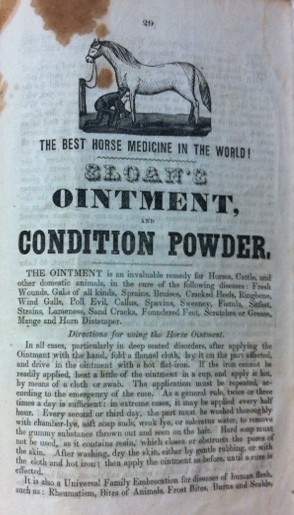 Advertisement for Sloan’s ointment in The complete farrier, or, Horse doctor (Chicago, 1848)

The Scott Collection is also strong in ancillary literature concerning horses.  Here we are less interested in collecting comprehensively than in acquiring the particularly rare, significant, and out-of-the ordinary works that add distinction to a major research holding.  In the area of veterinary medicine, for instance, we snapped up the second known copy of an early Chicago imprint: The complete farrier, or horse doctor, published by W. B. Sloan in 1848.  Sloan was a Chicago purveyor of patent medicines, and the primary objective of this veterinary handbook was to advertise his horse ointment (“The best horse medicine in the world!”) and related products to upper Midwest horse owners. 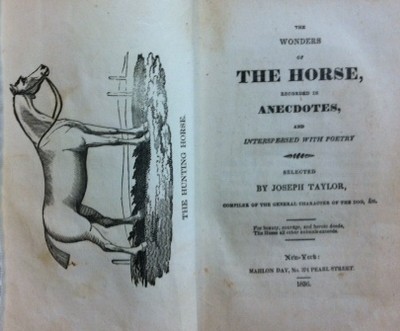 Frontispiece and title page to The wonders of the horse (New York, 1836)

Literature featuring horses and equestrian sports also figures prominently in the Scott Collection.  An unusual acquisition in this area is The wonders of the horse, recorded in anecdotes, and interspersed with poetry (New York, 1836).  Written for a juvenile audience and first published in London in 1808, this illustrated work anthologizes short extracts about horses from contemporary literature and periodicals.  This fine copy is resplendent in its original publisher’s binding of dark green ribbon-embossed cloth with a red glazed paper label printed in gold pasted to the front cover.

Horse breeders take pedigree as seriously as humans take genealogy, and we have taken advantage of an unusual opportunity to acquire several hundred late nineteenth-century catalogs issued by American horse farms and auction firms.  Today these catalogs are extremely rare, especially in such a concentrated holding, yet they are essential sources for tracing race horse  pedigrees.  These join other catalogs and several complementary manuscript collections previously acquired for the Scott Collection that document the history of the American horse breeding industry.  We have also added a variety of early trade catalogs featuring products suitable for raising and racing horses, such as an 1890 color-illustrated booklet featuring blankets for the well-dressed horse.  These provide a wonderful complement to the extensive and diverse collection of nineteenth- and twentieth-century trade catalogs recently given to us by Albert Small. 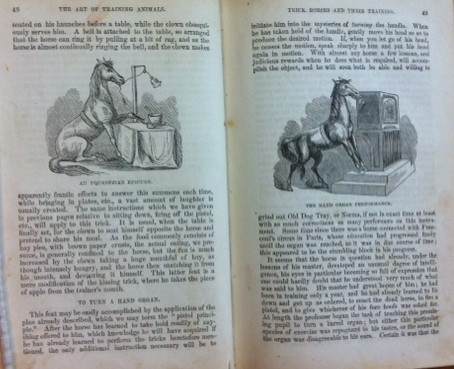 Other items in the Scott Collection document the roles horses have played in providing entertainment in circuses, exhibitions, and touring shows.  Equestrian and other animal acts have long been circus staples, and they became even more popular in the mid-nineteenth century with the rise of the touring circus.  Haney’s art of training animals (New York, 1869) was one of the first general handbooks in the field.  It begins with a long section on training horses to perform various tricks and to “act” in horse dramas, followed by another long section on training dogs. Other chapters concern elephants, lions, tigers, monkeys, pigs, rats and mice, seals, and birds, though we are told that “cats do not appear to be favorite subjects of the trainer’s art.”  Another new acquisition is a profusely illustrated “autobiography” of famed circus horse Princess Trixie, the “Queen of all educated horses.”  This pamphlet was sold on the road, wherever Princess Trixie was engaged to perform. 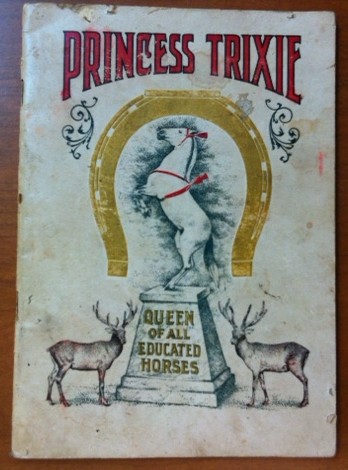 3 thoughts on “This Just In: Horsing Around!”