Every other year, hundreds of black alumni come back to Grounds to have fun with old friends, reminisce about their time at the University, and attend insightful open houses and seminars, ranging from education to entertainment to entrepreneurship.

The staff at the Albert and Shirley Small Special Collections Library, including Director Nicole Bouché and Head of Instruction and Outreach Petrina Jackson, hosted a number of alumni at the Library’s “Manuscripts and Mimosas” event.  The aptly named event featured some of Special Collections’ most recent acquisitions in African-American materials, a digital story of the early years of Black Greek-letter organizations at the University, and refreshing mimosas and pastries.  Note: No manuscripts were harmed during this event.  There was no contact between the refreshments and the manuscript materials.

African-American history is a key component of our collection development, and we are committed to documenting the institutions, communities, and people who influence this culture.  The alumni, family and friends who attended “Manuscripts and Mimosas” got a first-hand view of some of the books, manuscripts, photographs, and broadsides that comprise our African-American collections and materials. 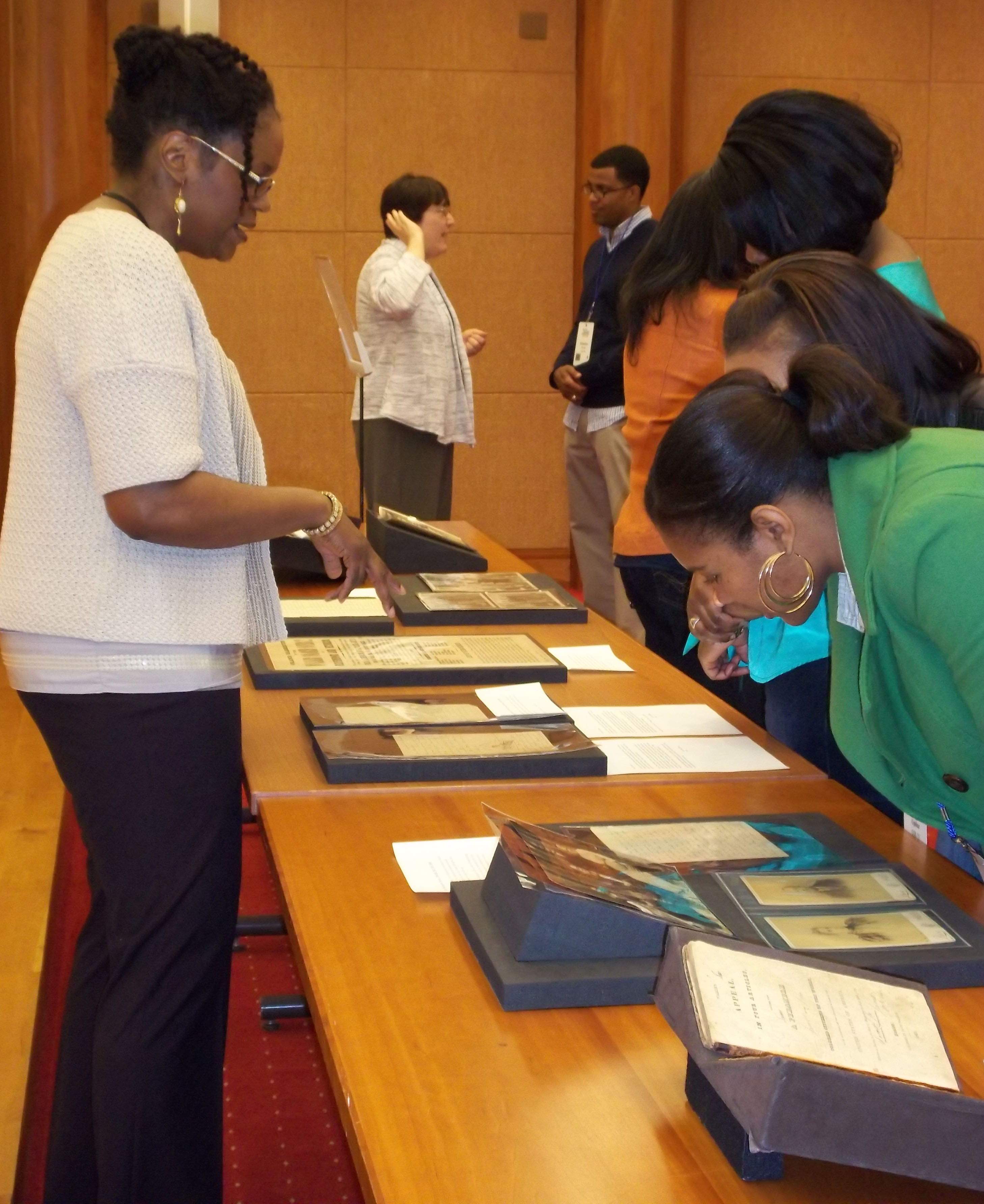 Petrina Jackson discusses some of the collection materials with alumni and friends. (Photograph by Gretchen Gueguen) 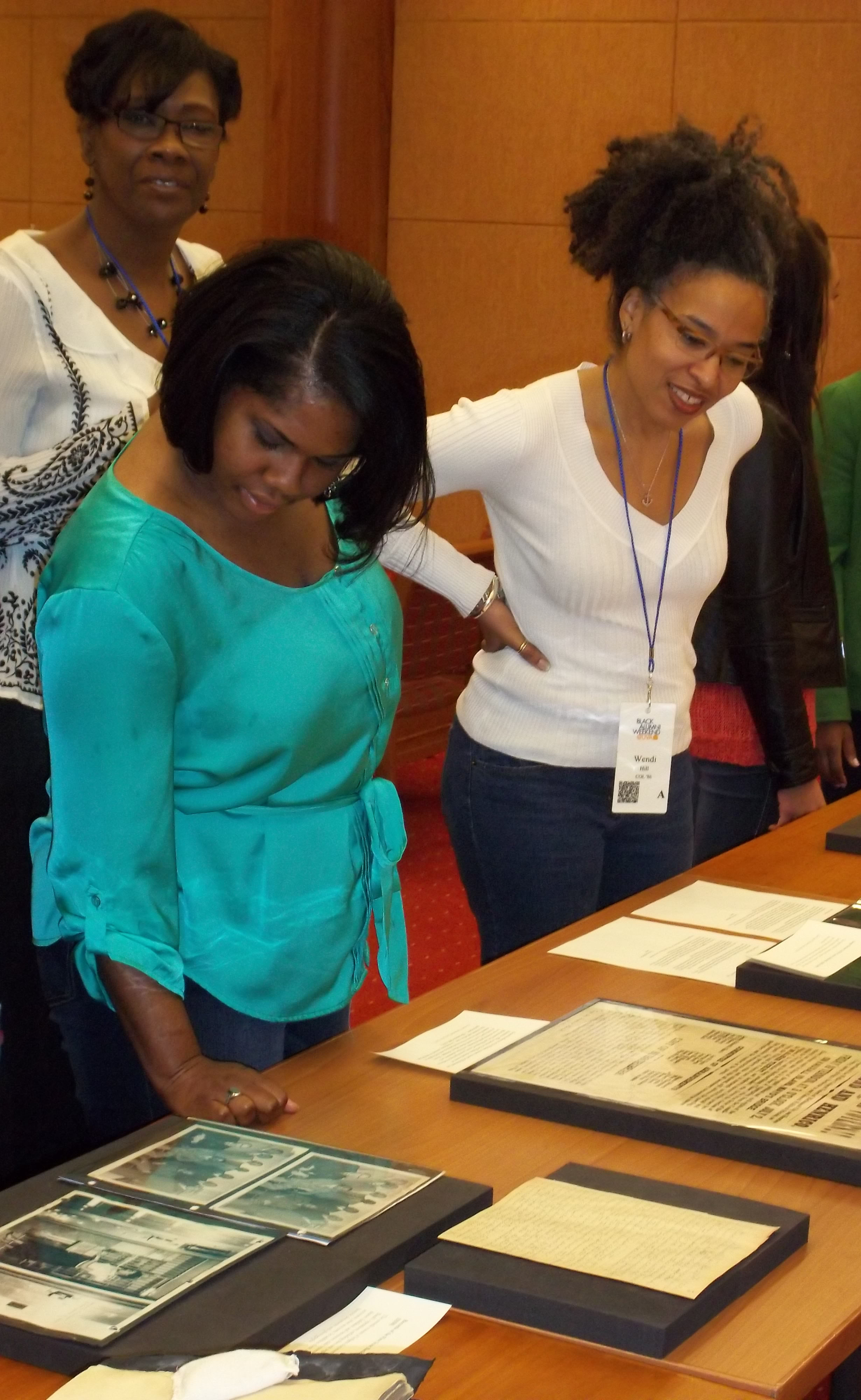 Here is a sampling of what they saw. 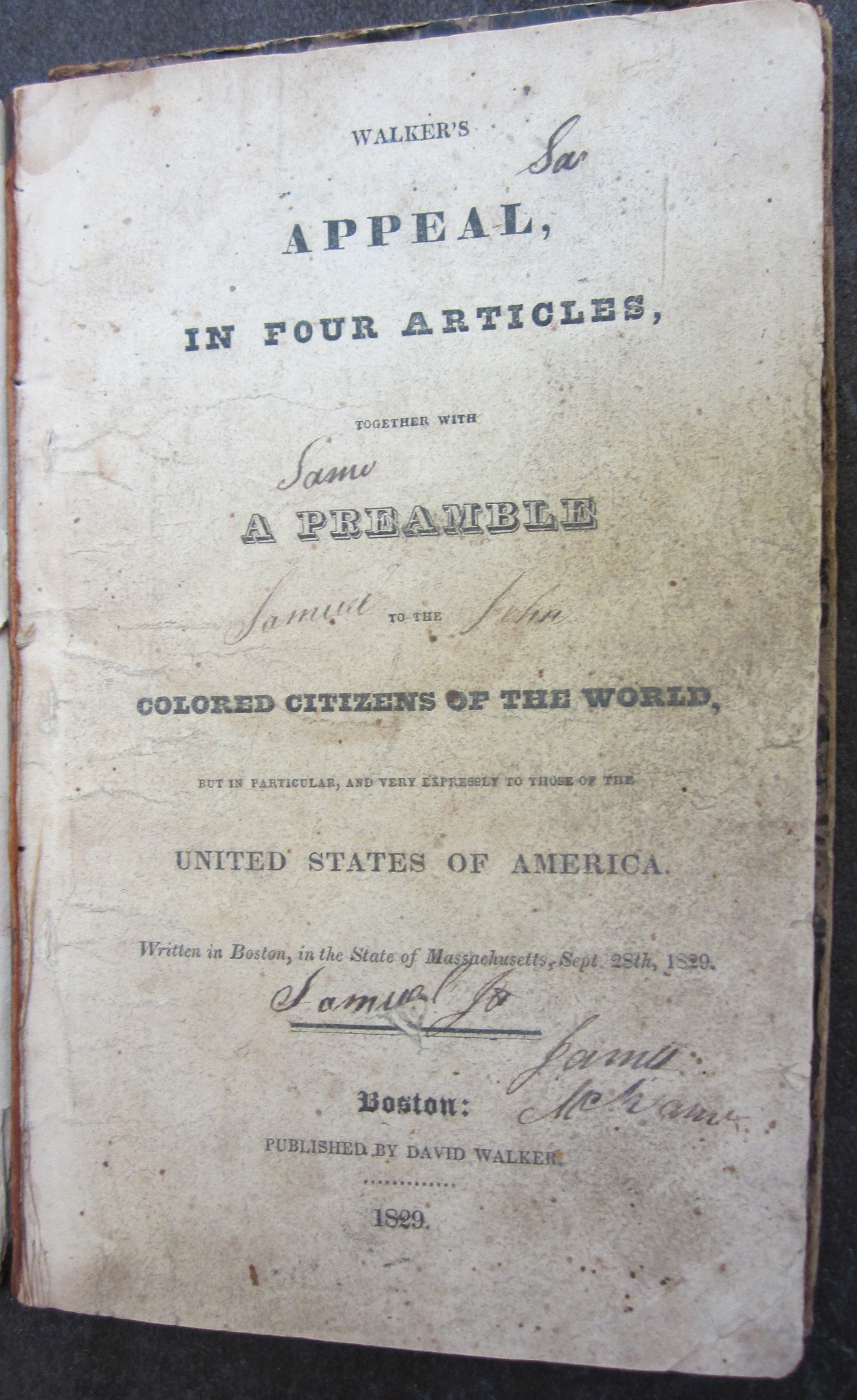 Featured is the title page of Walker’s Appeal, in Four Articles: Together with a Preamble to the Colored Citizens of the World, But in Particular, and Very Expressly to Those of the United States of America. The 1829 anti-slavery tract Walker’s Appeal is considered by many, the most radical document of its kind. In his book, David Walker, a free black man originally from the South, but living in Boston, advocates for slaves to rise up against their masters, refutes African colonization to Liberia, and attacks Thomas Jefferson’s views on blacks. (E446. W15 1829, Purchased from the Robert and Virginia Tunstall Trust Fund, 2010/2011-2011/2012. Photograph by Petrina Jackson) 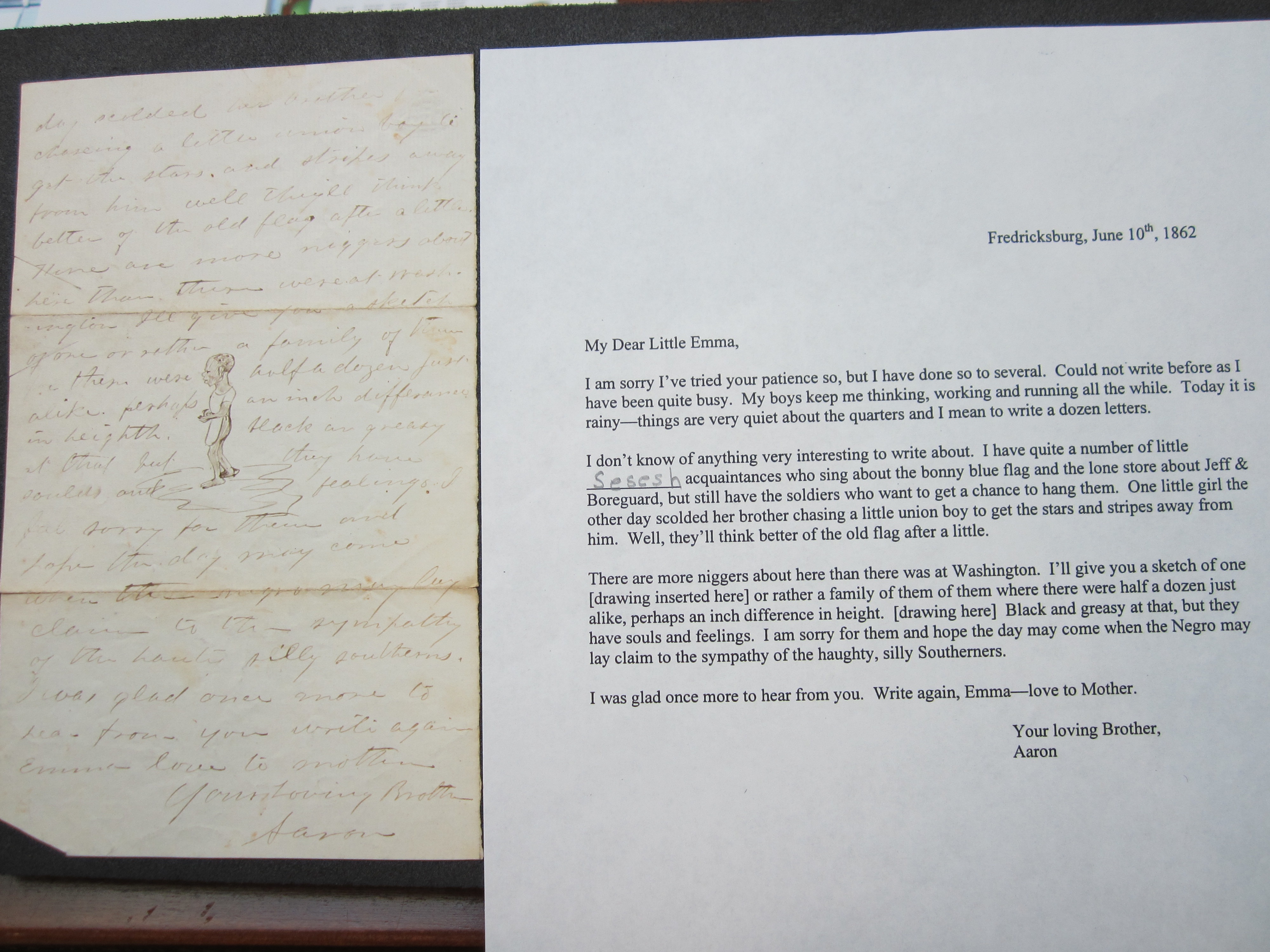 In this June 10th, 1862 letter, soldier Aaron Sager writes to his sister Emma, regarding his service in the Union Army and his encounter with black people. This letter, accompanied by its transcript, is one of a several Sager Brother Civil War letters written by Captain Aaron and Sergeant George J. Sager, who were from Syracuse, NY and served in the 76th and 149th NY regiments, respectively. (MSS 15190, Purchased from the Coles-Special Collections Fund 2010/2011. Photograph by Petrina Jackson) 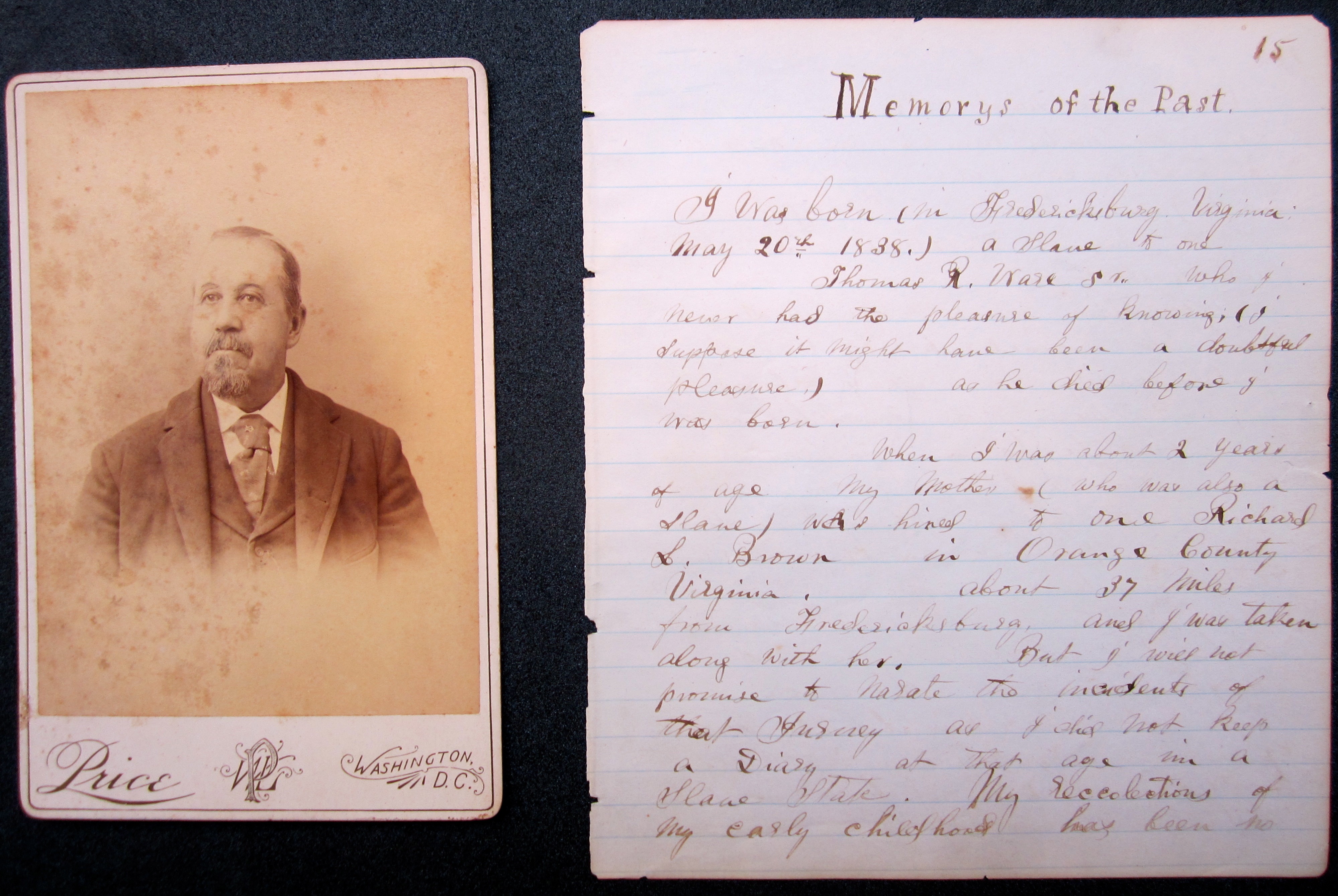 An undated photograph of John Washington and one page from his slave narrative, entitled “Memorys of the Past,” are featured. The narrative, which was written after the Civil War, describes Washington’s life as a slave in Fredericksburg and Richmond, Va., where he was hired out, ownership by the Ware family, marriage, his escape to freedom across the Rappahannock River in 1862, scouting for the Union Army, identifying prominent Southern sympathizers, and avoiding Confederate Colonel John S. Mosby’s men. (MSS 15000, Purchased from the Robert and Virginia Tunstall Trust Fund, 2011/2012. Photograph by Petrina Jackson) 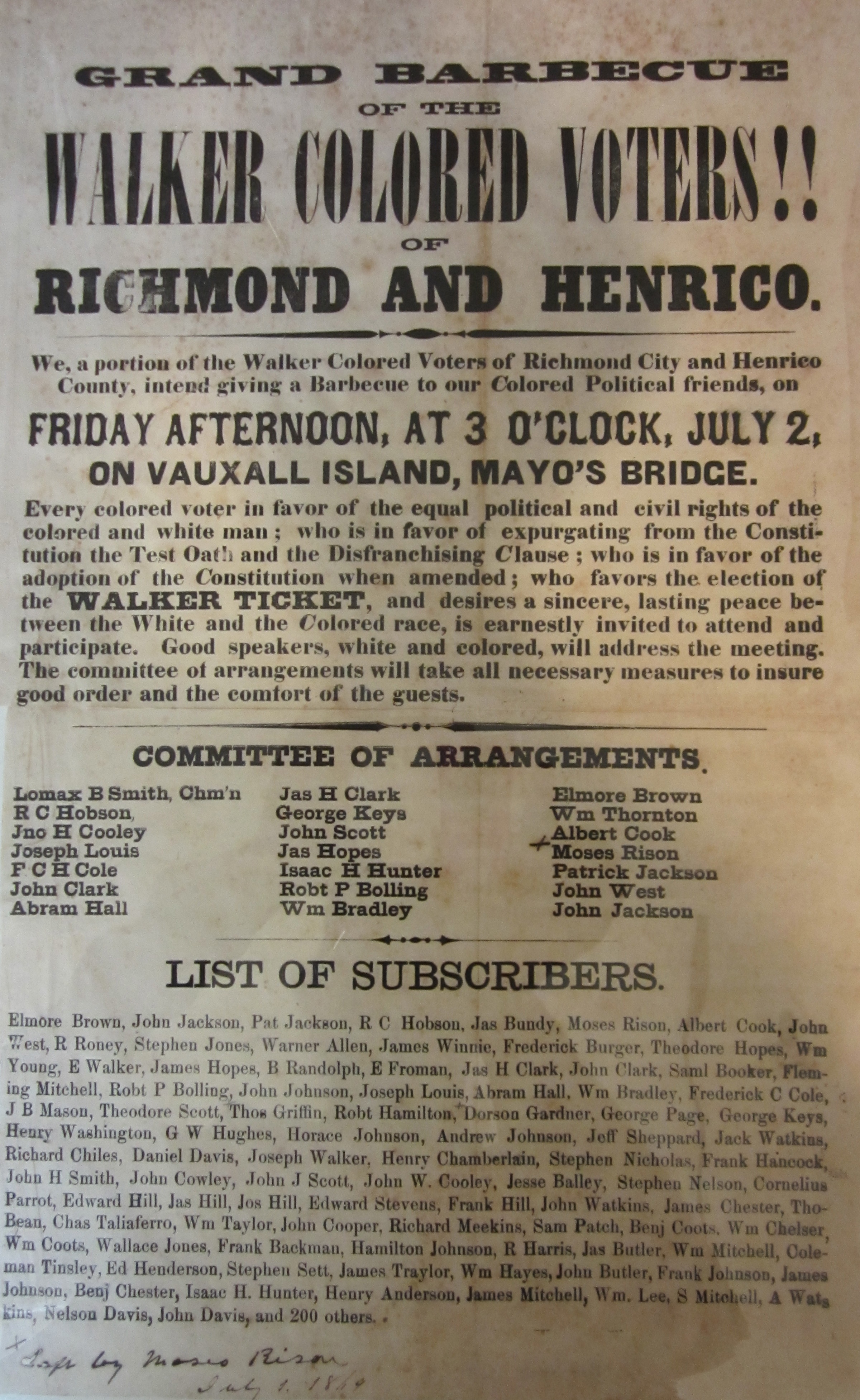 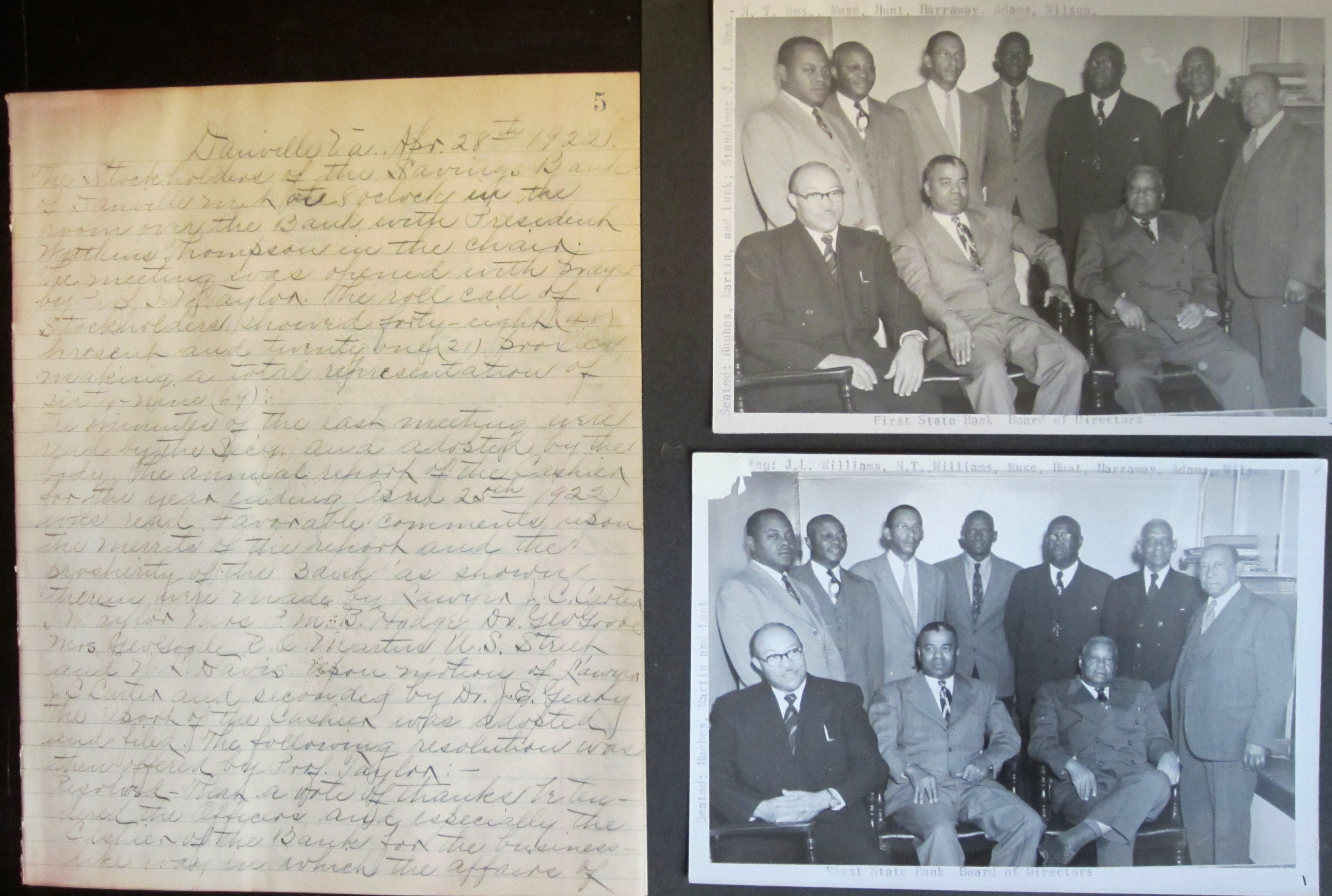 Pictured are two photographs, ca. 1950s, of the Board of Directors of the First State Bank and the minutes for a 1922 stakeholders’ meeting. We recently acquired this fantastic collection, documenting this African-American owned bank from Danville, Virginia. The bank thrives even today. (MSS 15550. Photograph by Petrina Jackson) 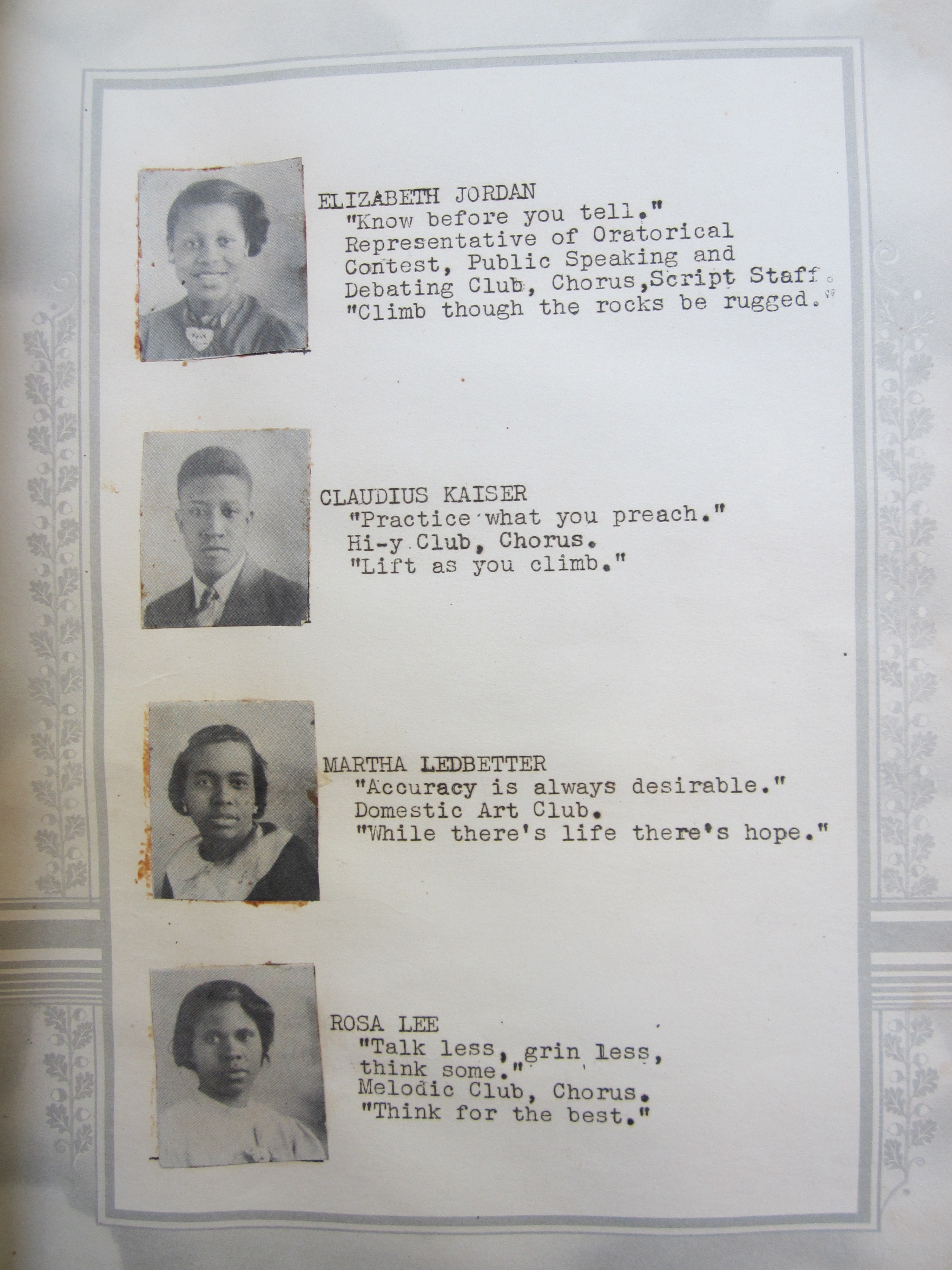 Featured is a page from the Peabody High School Yearbook (Petersburg, VA), 1939. The pages were mimeographed with pasted photographic prints. The volume includes a dedication, photographs of the school, faculty, and individual seniors, a class poem, class photographs and histories, and activity photographs and description, including clubs and athletics. (MSS 15284, Purchased from the Byrd Fund 2012/2013. Photograph by Petrina Jackson) 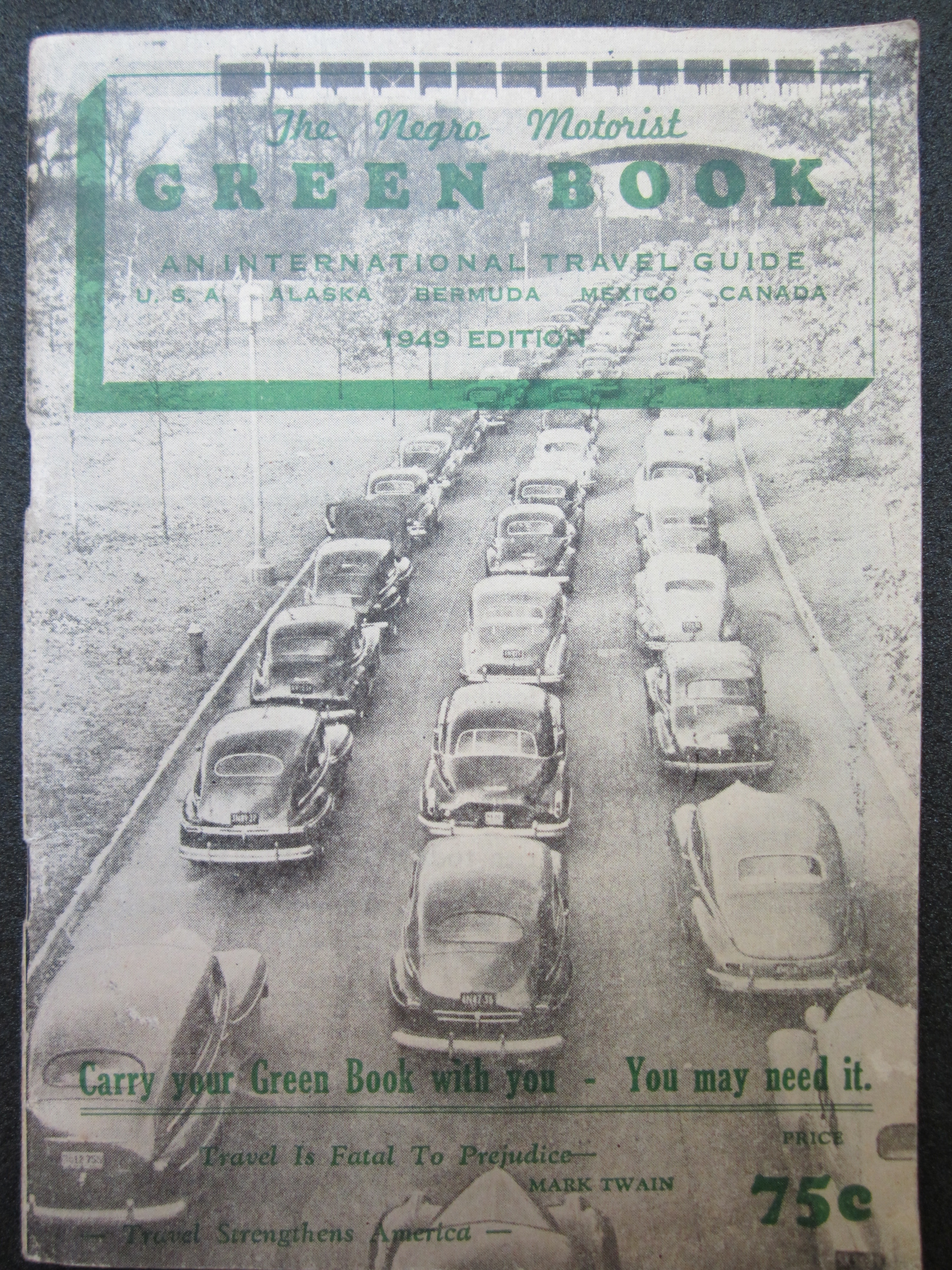 We also showed the digital story Black Greek Letter Organizations at the University of Virginia: The Early Years.  The story gives a snapshot of the founding, service, and social life of the National Pan-Hellenic Council’s historically black fraternities and sororities at the University from 1973 to 1985.  Happily, there were alumni at the event who saw photos of themselves that they had not seen in years.  This surprise made for lots of fun, spontaneous responses from the audience! 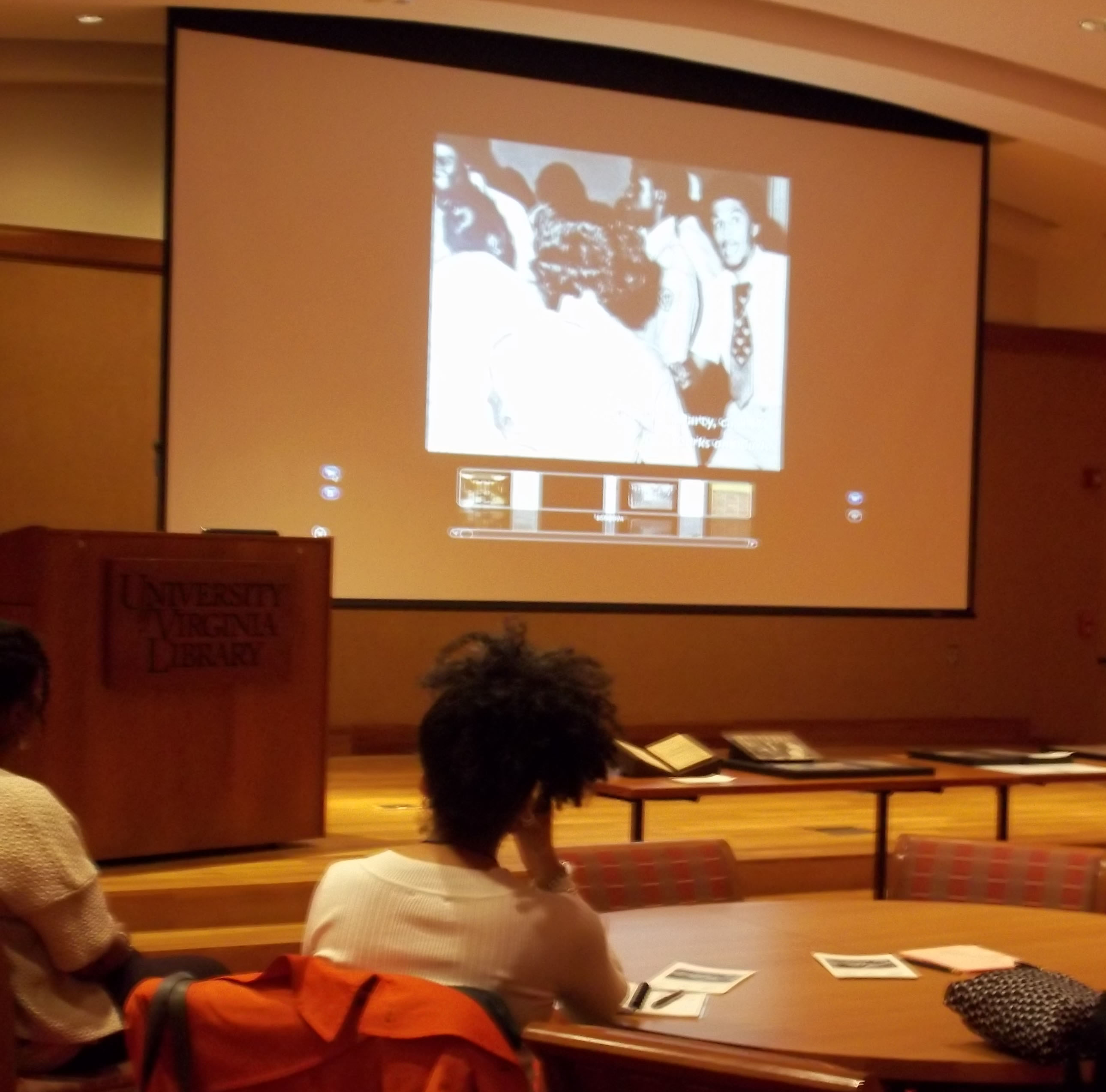 The audience watches the digital story Black Greek Letter Organizations at the University of Virginia: The Early Years. (Photograph by Gretchen Gueguen)

Because Special Collections is the home of the University Archives (UA), documenting the University’s history is central to what we do.  The UA is filled with official records from the institution itself, but the student experience is under-documented.  This is woefully true in the case of black students.  One of the goals of the Library is to change that, but that can’t happen without alumni themselves. 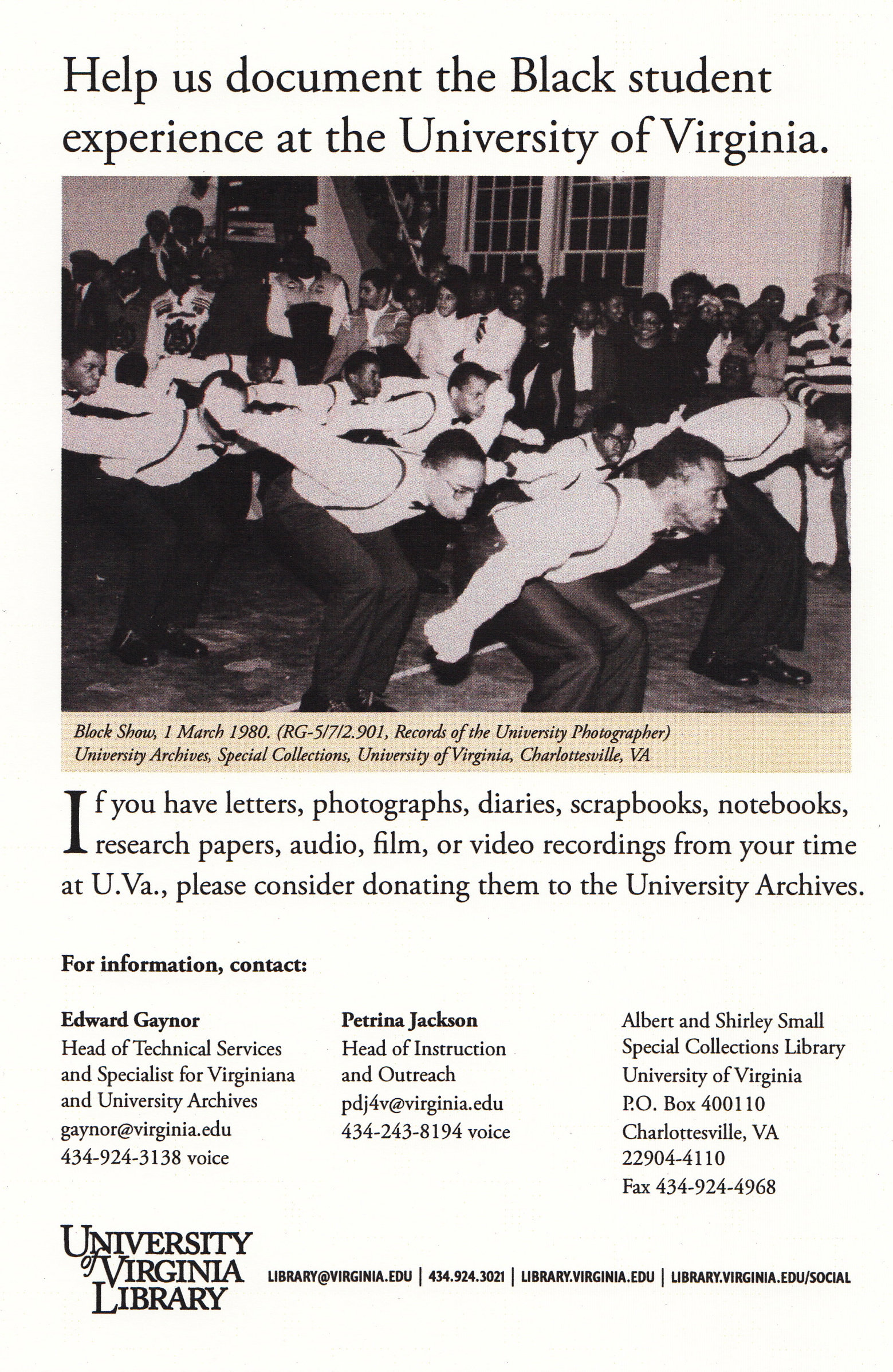 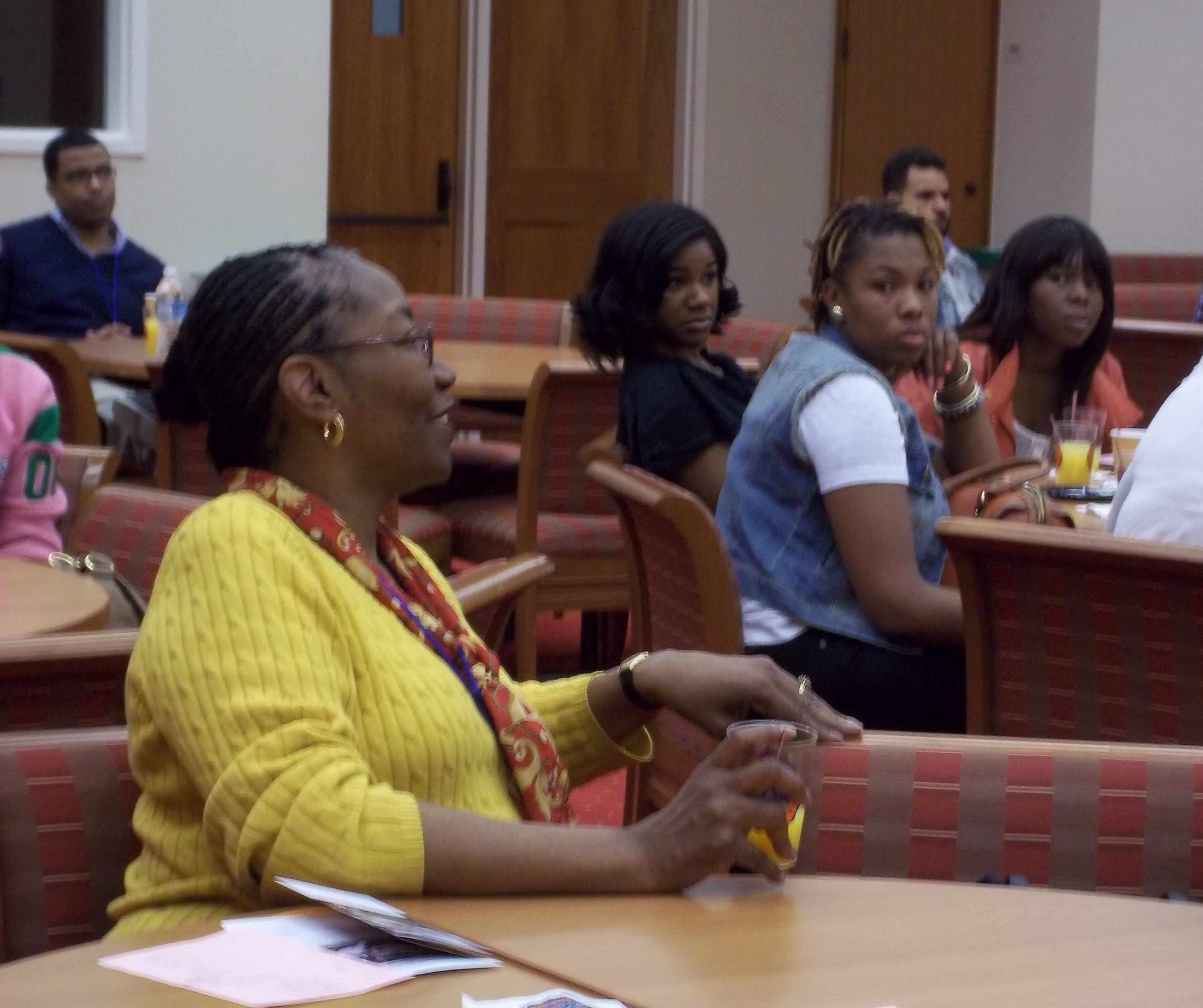 An alumna asks a question, regarding donating photographs. (Photograph by Gretchen Gueguen)

Based on responses from alumni at the event, we can safely say that the event was a great success.  One such response was a tweet from alum Quentin @AvenueSwank in which he states, “The UVA special collections library is amazing! Manuscripts and mimosas was super enlightening #uvabaw.”  We look forward to having another event like this when alumni come back home to U.Va. for the next Black Alumni Weekend!

I would like to extend a special thank you to my colleague, Digital Archivist Gretchen Gueguen, who took time out of her Saturday desk shift to take so many great photographs of the event and to Sarah Nyanjom, Assistant Director of Reunions, for all of her help in planning the event logistics and providing the mimosas and refreshments.