In a previous post Nicole Bouché, Director of the Small Special Collections Library, related the story of how the Maurice Lévy Collection of French Gothic arrived at its permanent home under Grounds.  Thanks to the magnificent gift of the Sadleir-Black Collection of Gothic Novels received in 1942, U.Va. has world-renowned holdings in the English Gothic novel, now wonderfully augmented by the Lévy Collection.  Here is a brief peek at a few of its riches. 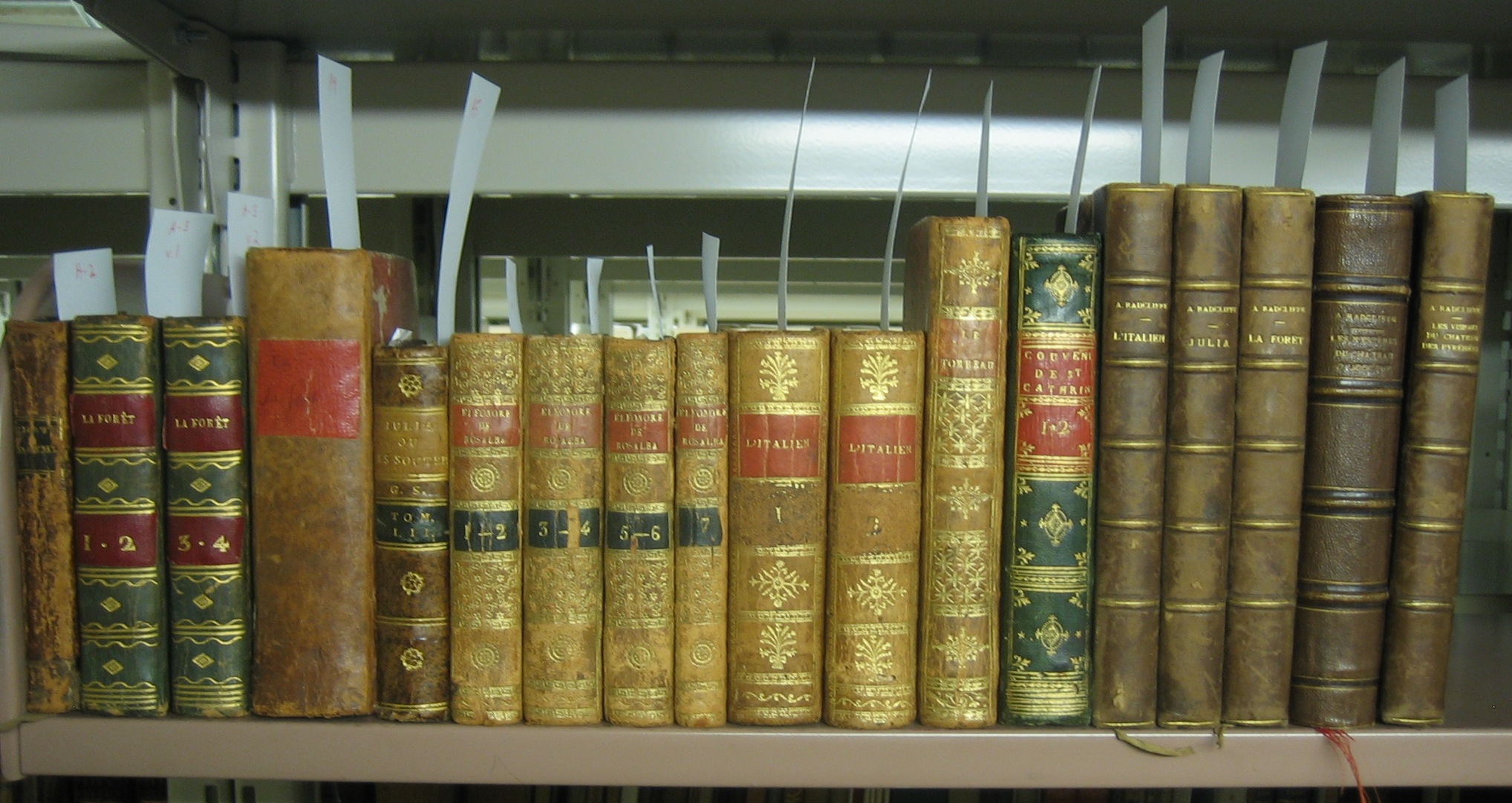 A shelf of Ann Radcliffe in French translation. 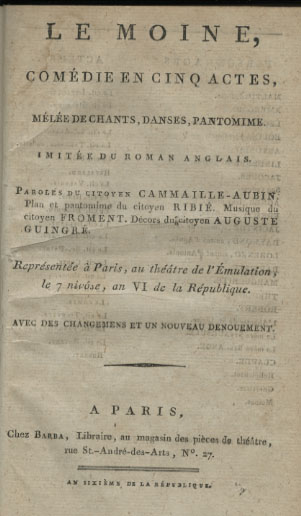 The Gothic novel proved so popular with readers that it quickly penetrated popular culture in both England and France, attracting a wider audience.  Consider, for example, Matthew Gregory Lewis’s novel, The Monk.  It created a sensation when first published in London in 1796. The following year it was translated into French and published in Paris as Le moine, and the Lévy Collection contains a copy of the first French edition. In December of 1797 Lewis’s novel was adapted for the Paris stage, in true French fashion, as a “comédie en cinq actes, mélée de chants, danses, pantomime.” The Lévy Collection includes a fine copy of the rare printed text, which contains a cast list for the  premiere performance at the Théâtre de l’Émulation, together with, intriguingly, “des changemens et un nouveau denouement.” (Please, not a happy ending!) 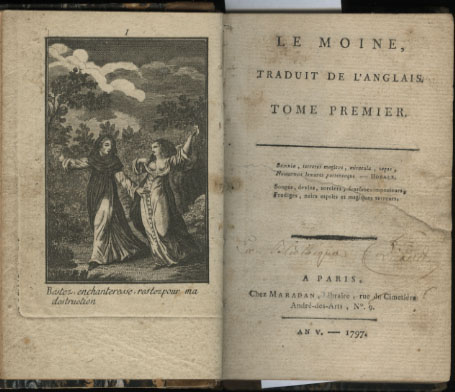 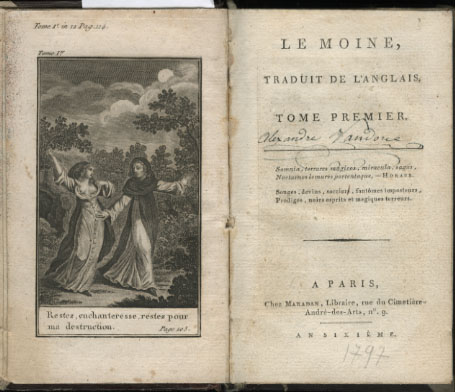 As Nicole Bouché has noted, Maurice Lévy was fascinated by the illustrations found in French Gothic novels, and in 1973 he published a book on the subject, Images du roman noir.  Illustrations may reveal unexpected things about a publication.  For example, the first French translation of The Monk (Paris, 1797) includes an etched frontispiece depicting one of the novel’s most dramatic moments.  The translation sold so well that the same publisher issued a new edition later that same year.  But in that edition’s frontispiece, the characters switch positions.  It is likely that the publisher, not anticipating the need for a second edition, neglected to save the copperplate and therefore had to commission a new plate of the same image.  In copying the original frontispiece (which printed in reverse orientation from the design as etched on the copperplate), the etcher necessarily reversed the image! 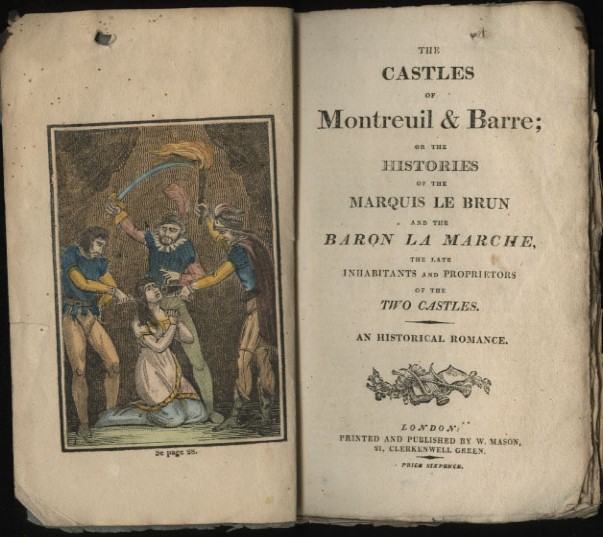 For those English readers who could not afford the cost of a multi-volume novel, publishers offered Gothic fiction in shorter, less expensive form.  The castles of Montreuil & Barre was first serialized in The Lady’s Magazine during 1797-1798, then printed in chapbook form (“price sixpence”) with a lurid hand-colored frontispiece to attract purchasers. Special Collections already possesses two early chapbook editions of this work, courtesy of the Sadleir-Black Collection, and the Lévy Collection contributes a third, published by W. Mason and dating to ca. 1820. This copy is in its original blue paper wrappers, which feature on the inside a list of the various chapbooks available at “Mason’s Pamphlet Warehouse” on Clerkenwell Green. 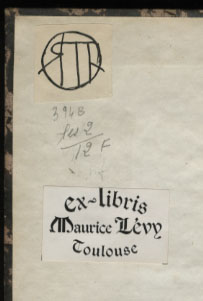 Because many of the Lévy volumes are two centuries old, they display interesting evidence of ownership and use by multiple generations of readers and collectors.  Two works in the Lévy collection, for instance, bear the booklabel of noted artist Henri de Toulouse-Lautrec (1864-1901).  It is shown here (above Maurice Lévy’s booklabel), pasted into a copy of the intriguingly titled Miss Glamour, ou les hommes dangereux (Paris, an IX [1800/01]).  Styled on the title-page as a ‘free translation from the English’ by Théodore-Pierre Bertin, the original English novel has yet to be positively identified. Perhaps Bertin, who self-published this very rare edition, was actually its author? 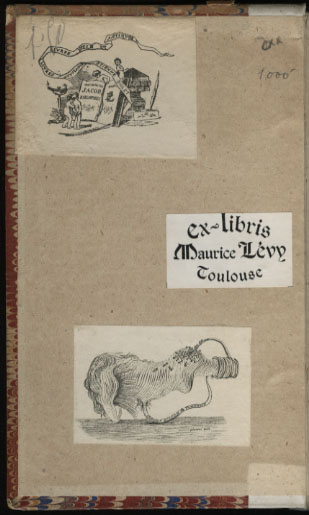 Emanuella, ou la découverte premature (Paris, an IX [1800/01]) is a French translation of Eliza Haywood’s The rash resolve, or the untimely discovery. First published in 1724, decades before the heyday of the Gothic novel in England, its plot nonetheless contains some Gothic elements, and it is interesting to see it revived at this time for the French market. Also interesting is the provenance: this copy bears the booklabels of (at top) prolific author Paul Lacroix (“Bibliophile Jacob,” 1806-1884) and (at bottom) the founder of Surrealism, André Breton (1896-1966).  Fittingly, Breton’s arresting booklabel was designed by Salvador Dalí.