We are pleased to feature a guest post by Third-Year Garrett Gottesman and Fourth-Year Susan Gravatt, bloggers for The Media Studies Experience.

After a tough loss against Michigan State on Friday during the Sweet Sixteen round of this year’s NCAA Men’s Basketball Tournament, many Cavalier fans have been distraught. But instead of moping around, we decided to dig through the Special Collections Library to find some things that might just restore your faith in the glory that is Virginia Basketball. We may not have a basketball national championship this year, but what we do have is a 109-year old institution focused on respect, academic balance, and character. Our message is clear: win or lose, we are proud to be Hoos! 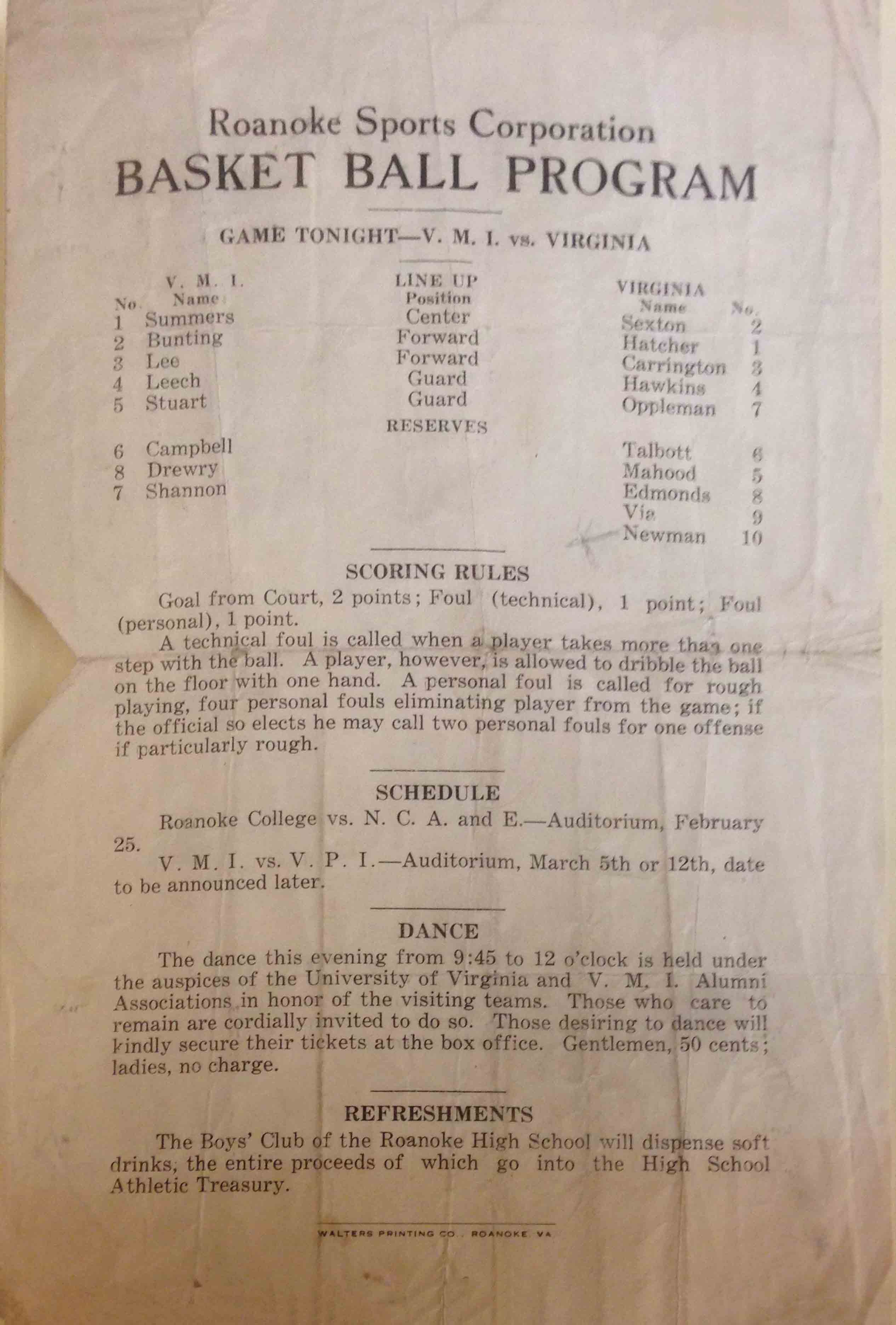 The 1910 program is complete with the rules of the game (pre-three point shots) and plans for the dance and refreshments that followed. “Those desiring to dance will kindly secure their tickets at the box office. Gentlemen, 50 cents; ladies, no charge.” (Broadside 1910z .R62. Photograph by Garrett Gottesman) 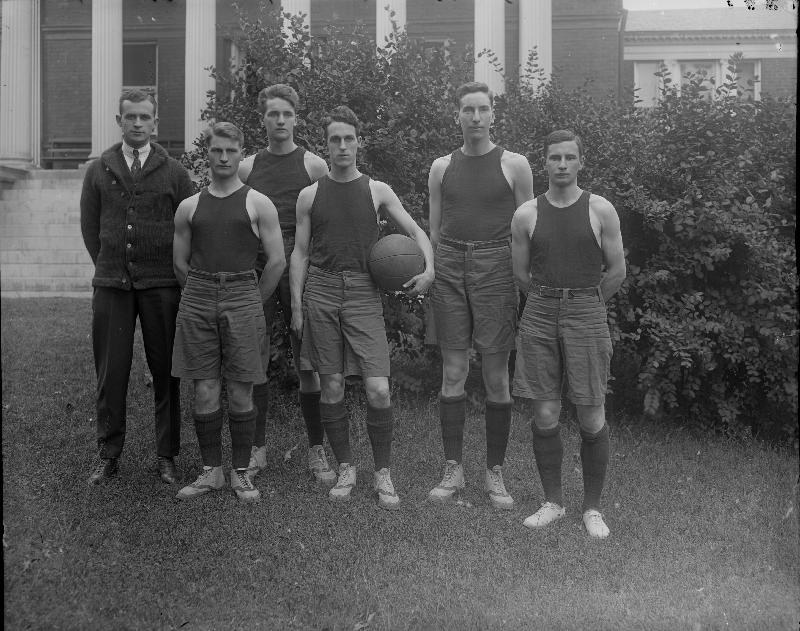 3. These Flashbacks to Simpler Stadium Seating at Mem Gym 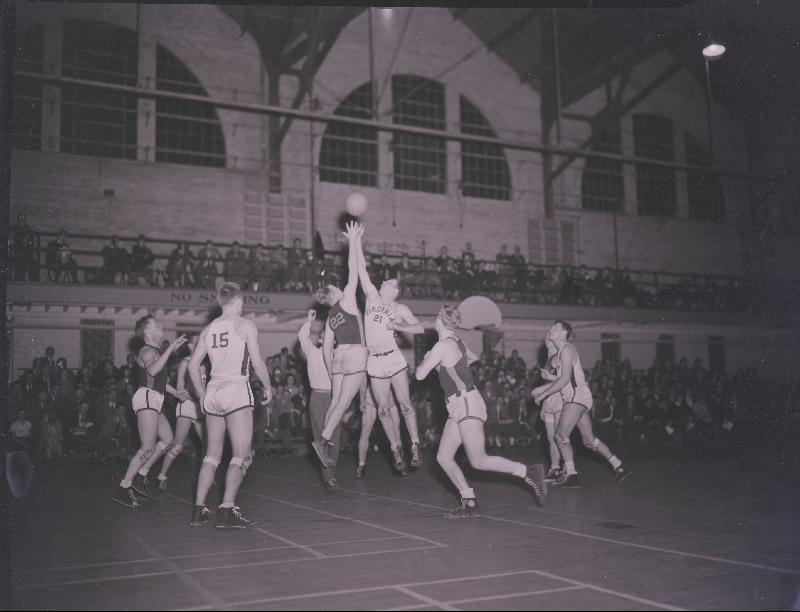 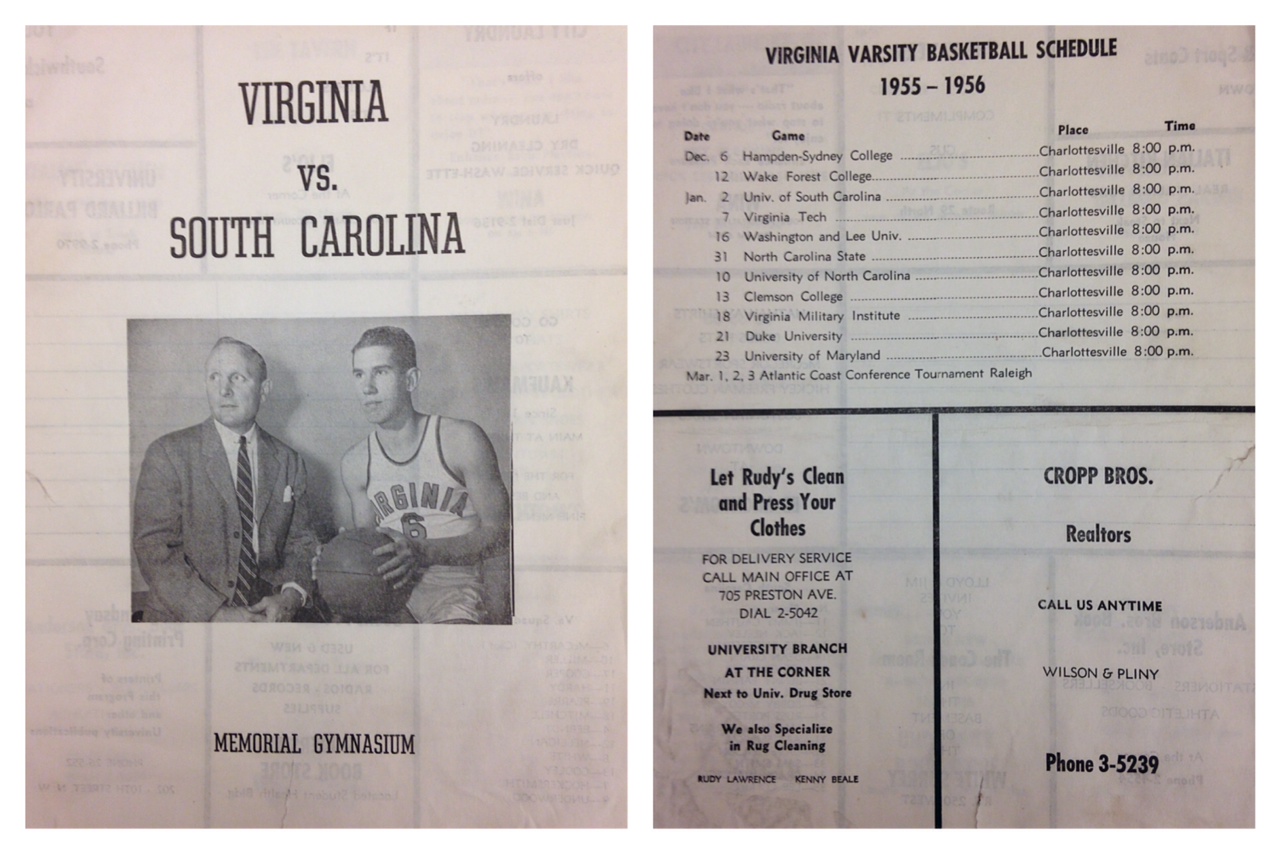 4.  Or These Memories from University Hall 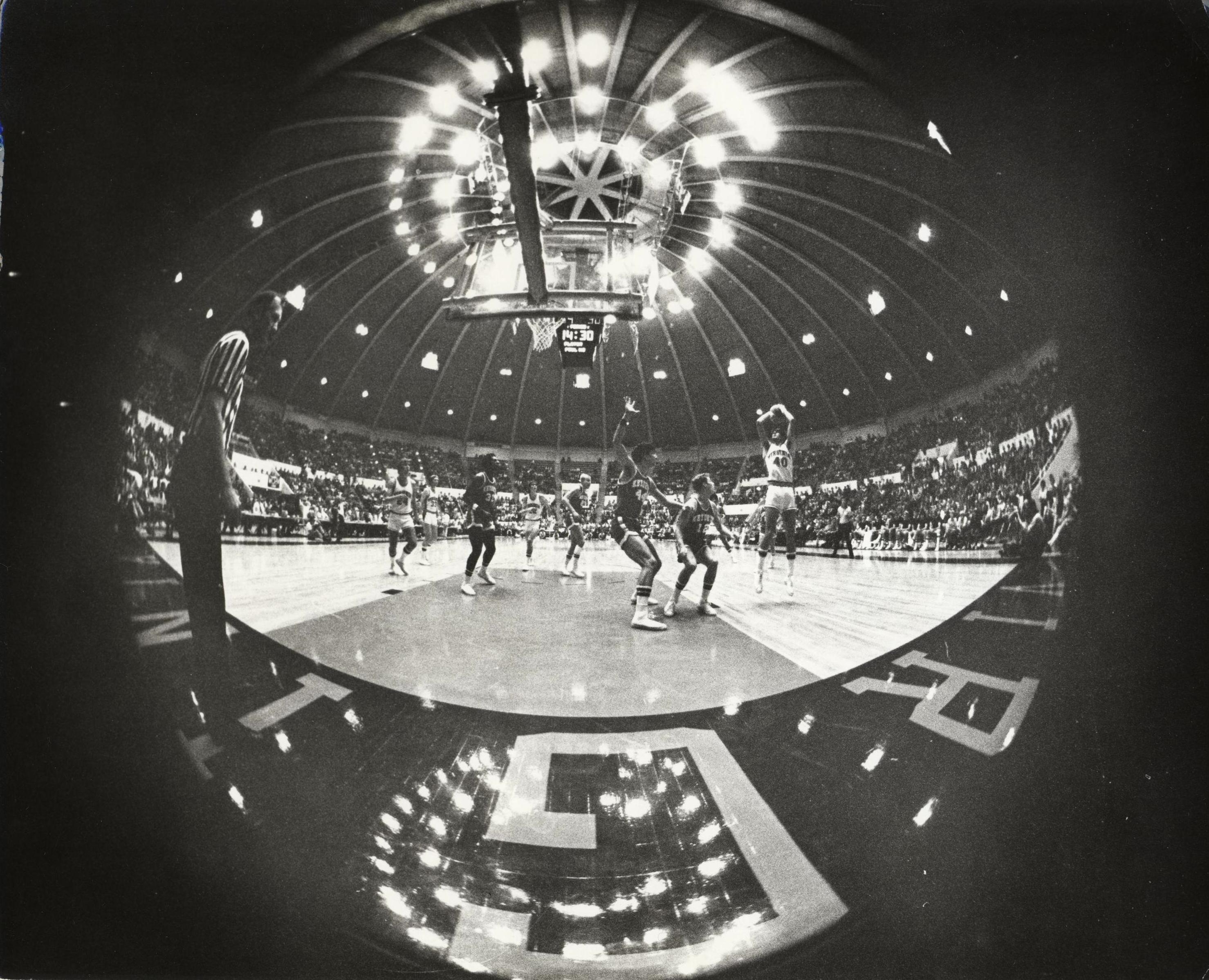 Basketball games were played at the University Hall arena from 1965 to 2006, as seen in this fish-eye photo from 1972… (RG-30/1/10.011. University of Virginia Visual History Collection. Image by U.Va. Digitization Services) 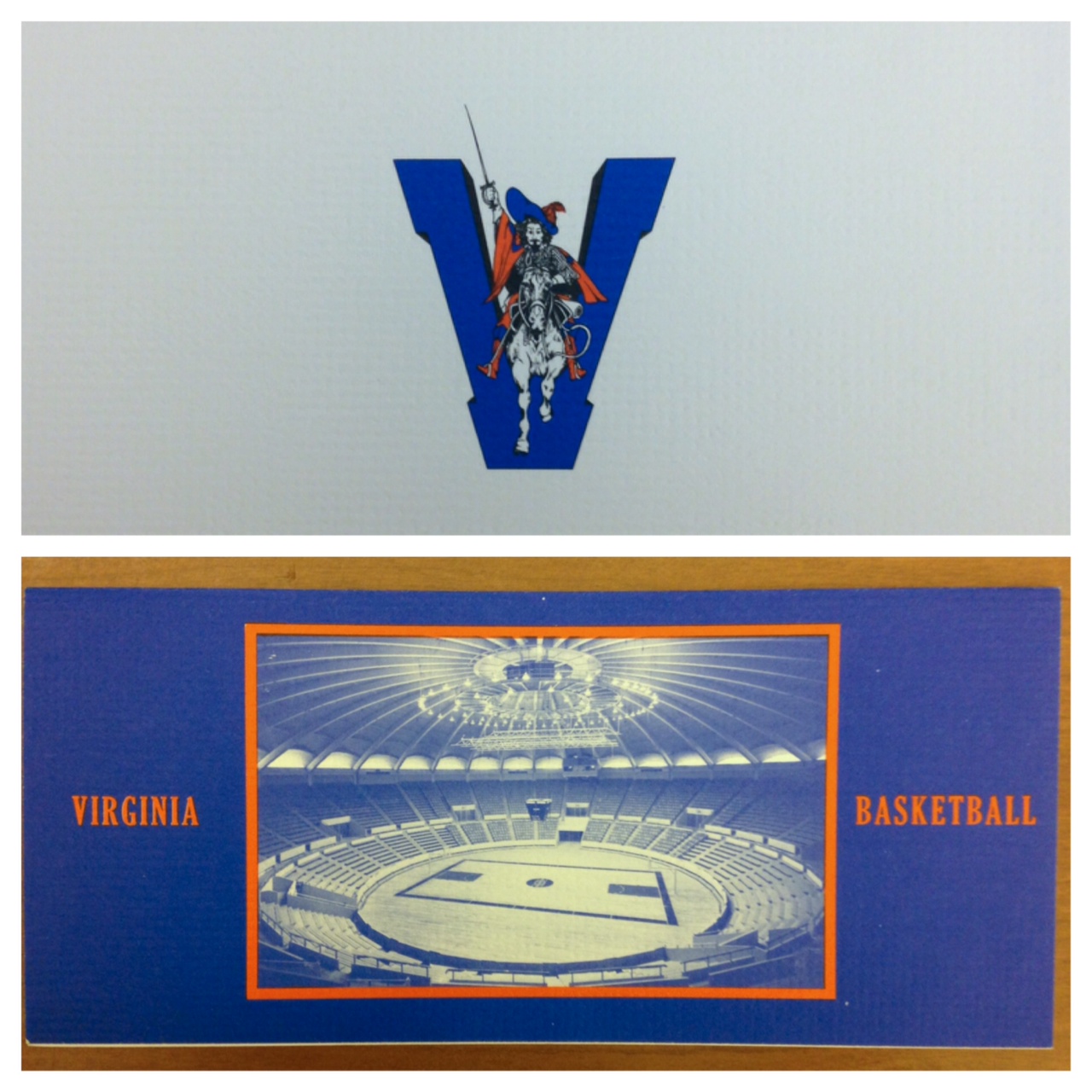 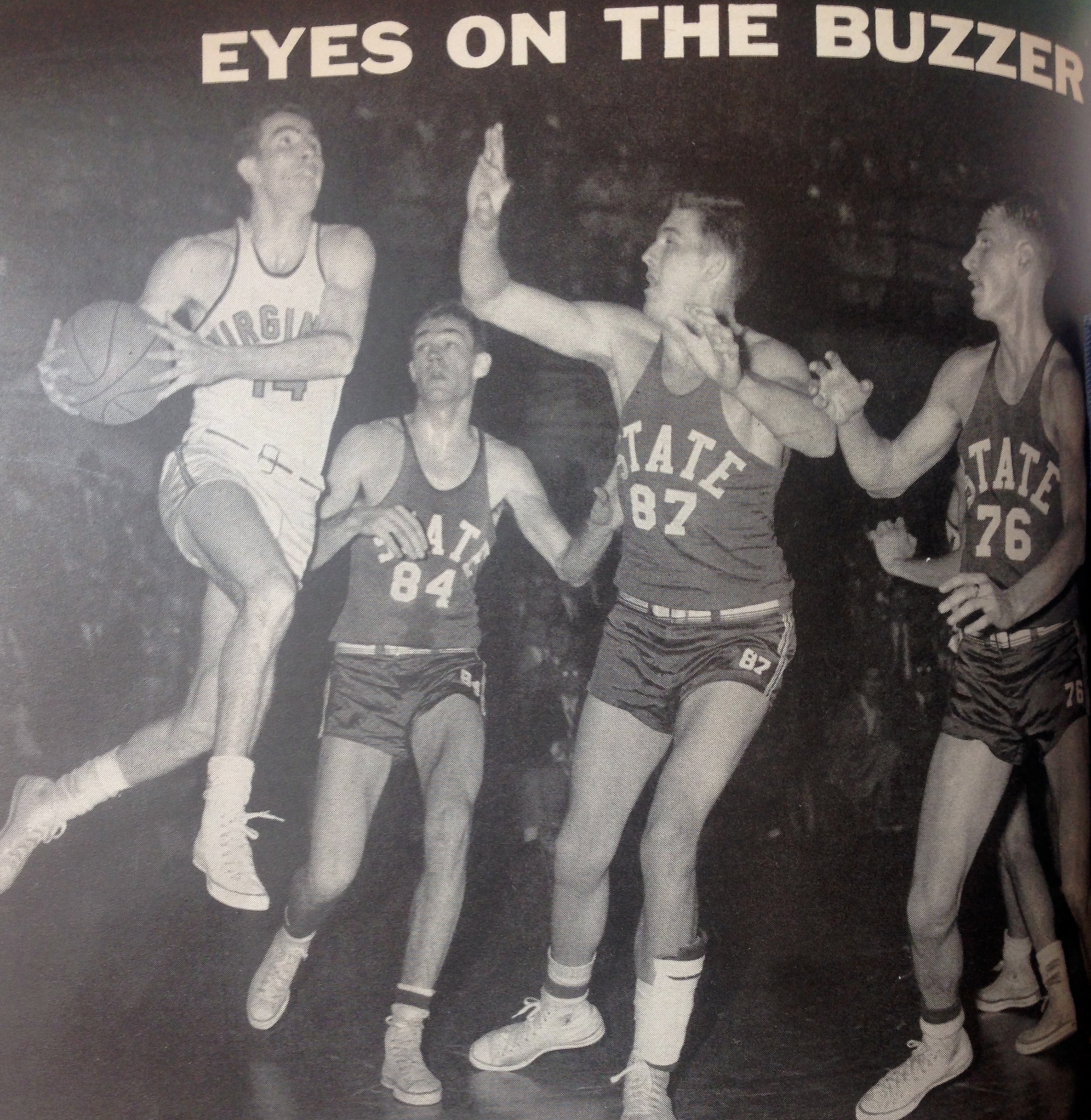 “At this tradition-soaked institution, where students wear coats and ties to class, basketball was long considered a kind of gauche pastime designed for the peasants in the hinterland. Buzzy Wilkinson changed all that. This year Virginia played to packed houses both at home and away.””Eyes on the Buzzer” from Sports Illustrated, March 19, 1955. (GV885 .H4 1955. Photograph by Garrett Gottesman) 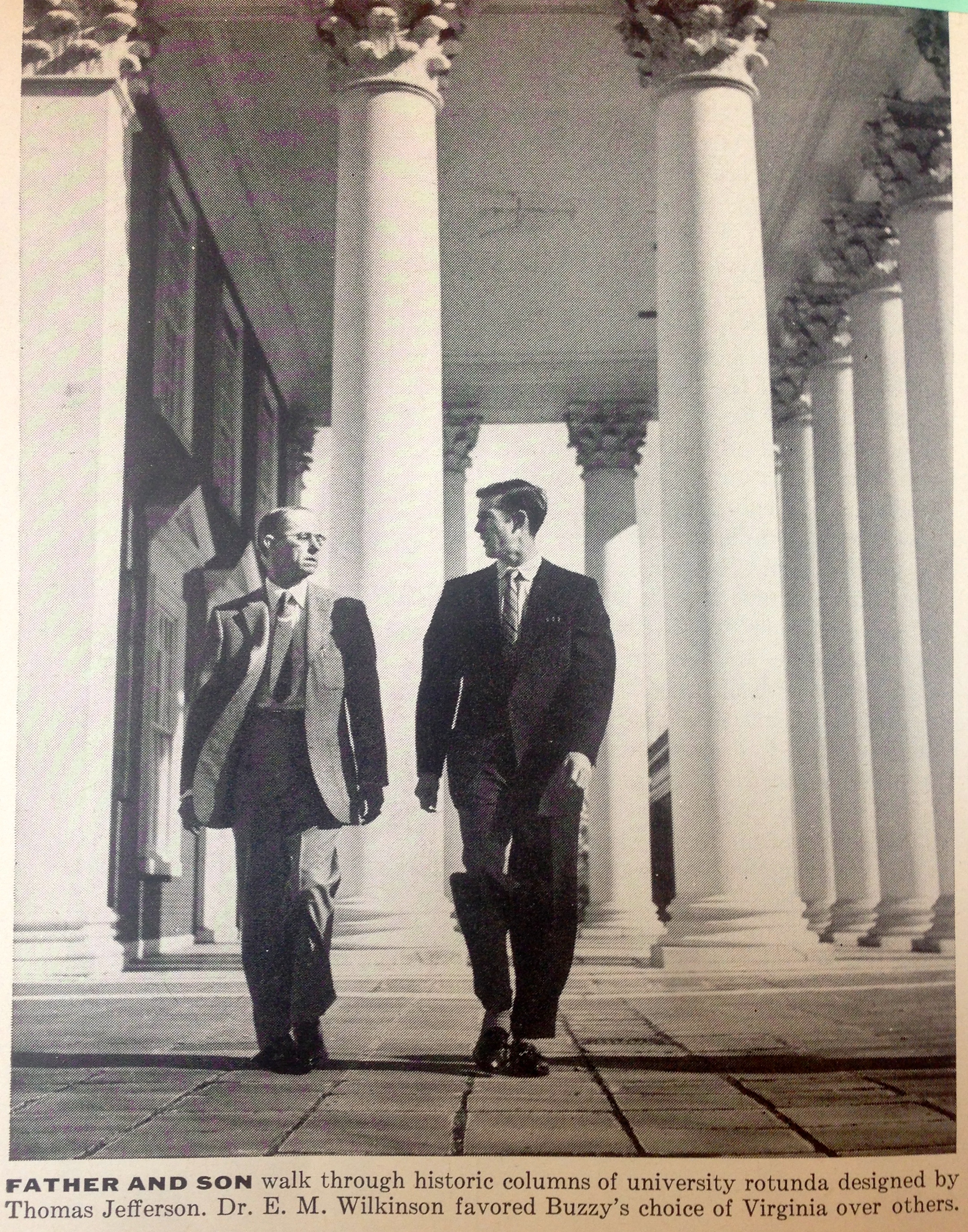 The article tells the story of the spark that reignited the fire in Virginia basketball, and the number-one-recruited NBA player who decided to pursue a law degree instead. He still holds the ACC record for highest scoring average at 28.1 points per game. “Eyes on the Buzzer” from Sports Illustrated, March 19, 1955. (GV885 .H4 1955. Photograph by Garrett Gottesman) 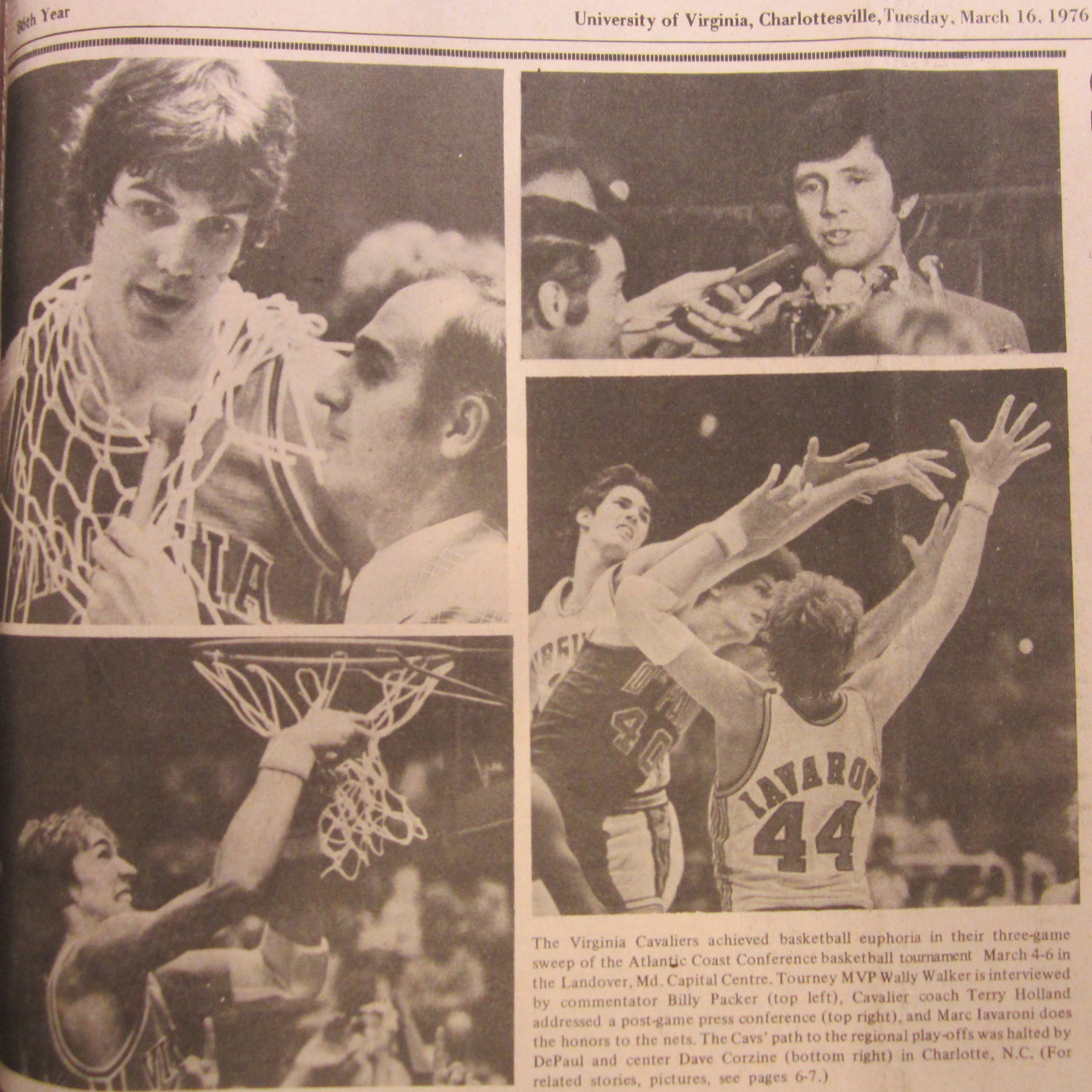 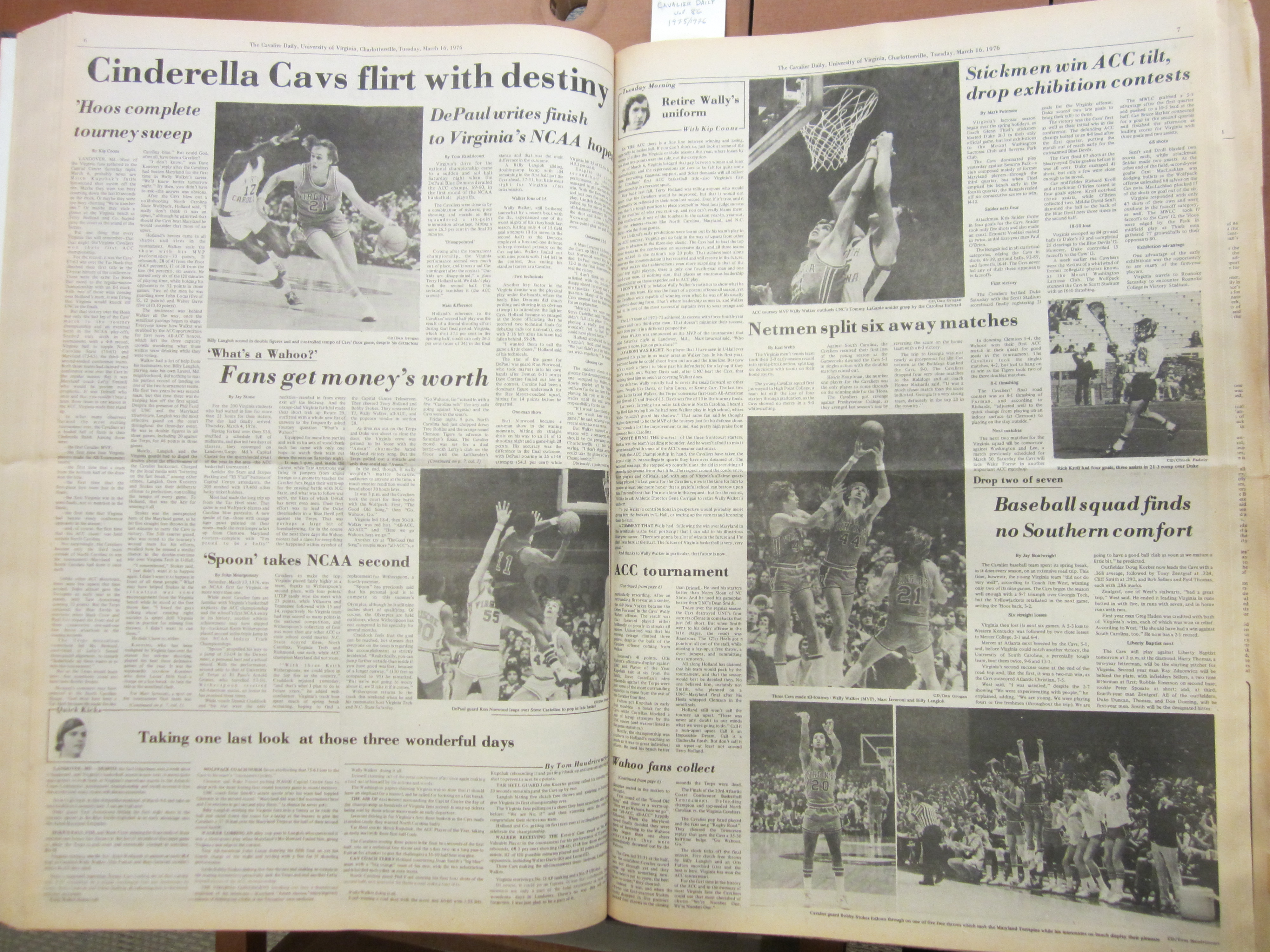 “The Cinderella Cavs Flirt With Destiny” – This issue of the Cavalier Daily possesses some of the only information around about that 1976 ACC Championship win from the Wahoos. It provides full details of how this underdog team came back to win it all. Going into the tournament, the Hoos were seeded six with a 4-8 record and before taking on North Carolina in the championship game, they had to “topple NC State (75-63) and Maryland (73-65), the third and second seeded conference teams.” The championship was no easy match. Five clutch free throws from Billy Langloh secured the victory over the Tar Heels (67-62)- making their first ACC win also the ‘first time that the first-place bye team lost in the finals’. “As methodical and controlled as their coach is calm and composed, the individual Cavalier’s showed in the ACC tournament that Virginia is henceforth a team to be reckoned with…” Author: Kip Croons. Pages 6 and 7 of the Cavalier Daily, March 16, 1976. (Photograph by Petrina Jackson) 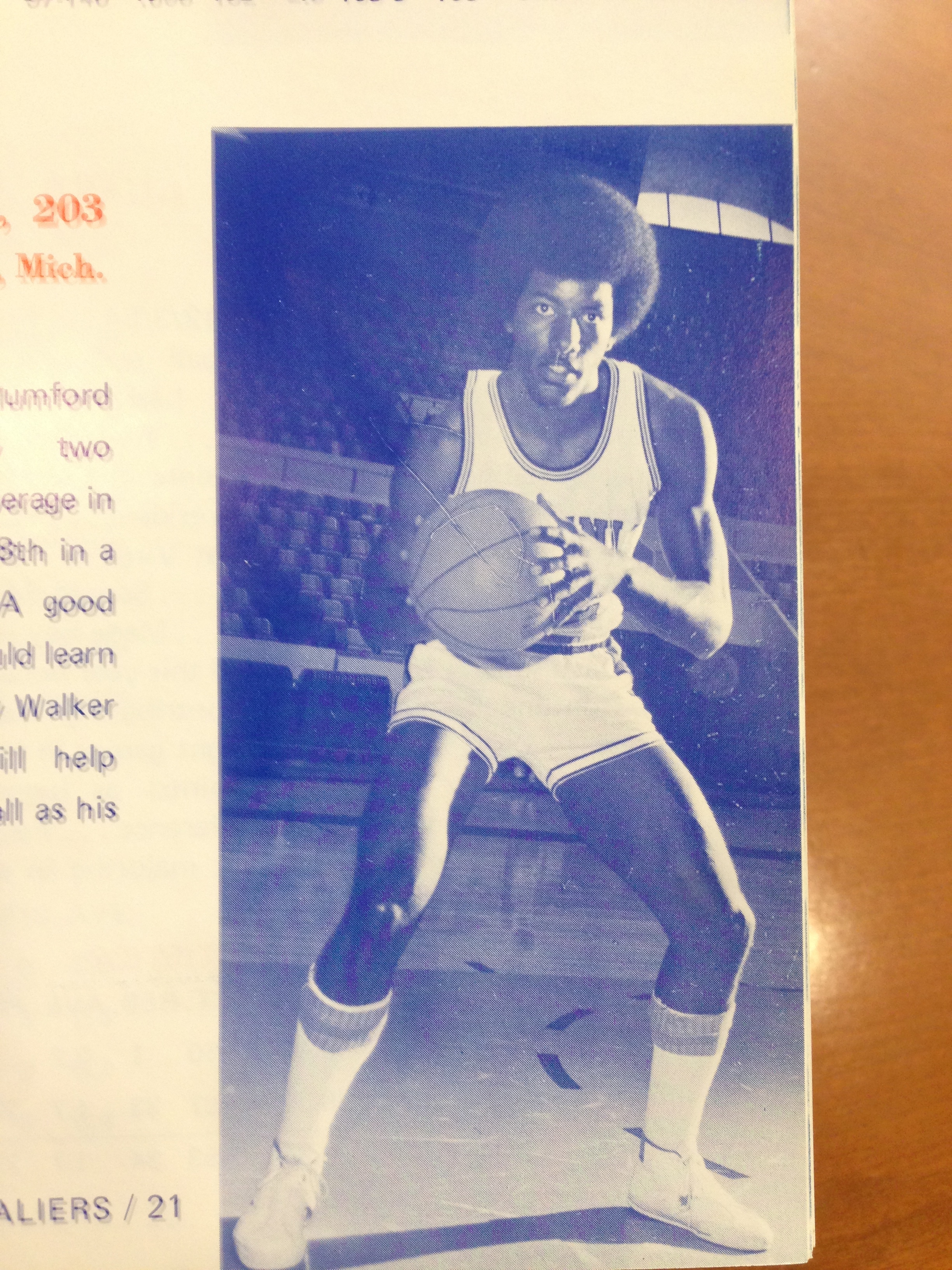 1975-1976 Basketball Yearbook. Kevin Moore exemplified the era with his short shorts and Afro. This yearbook also includes the schedule for the 1976 season that would carry the Hoos to their ACC Championship win. (GV882 .V5. Photograph by Garrett Gottesman) 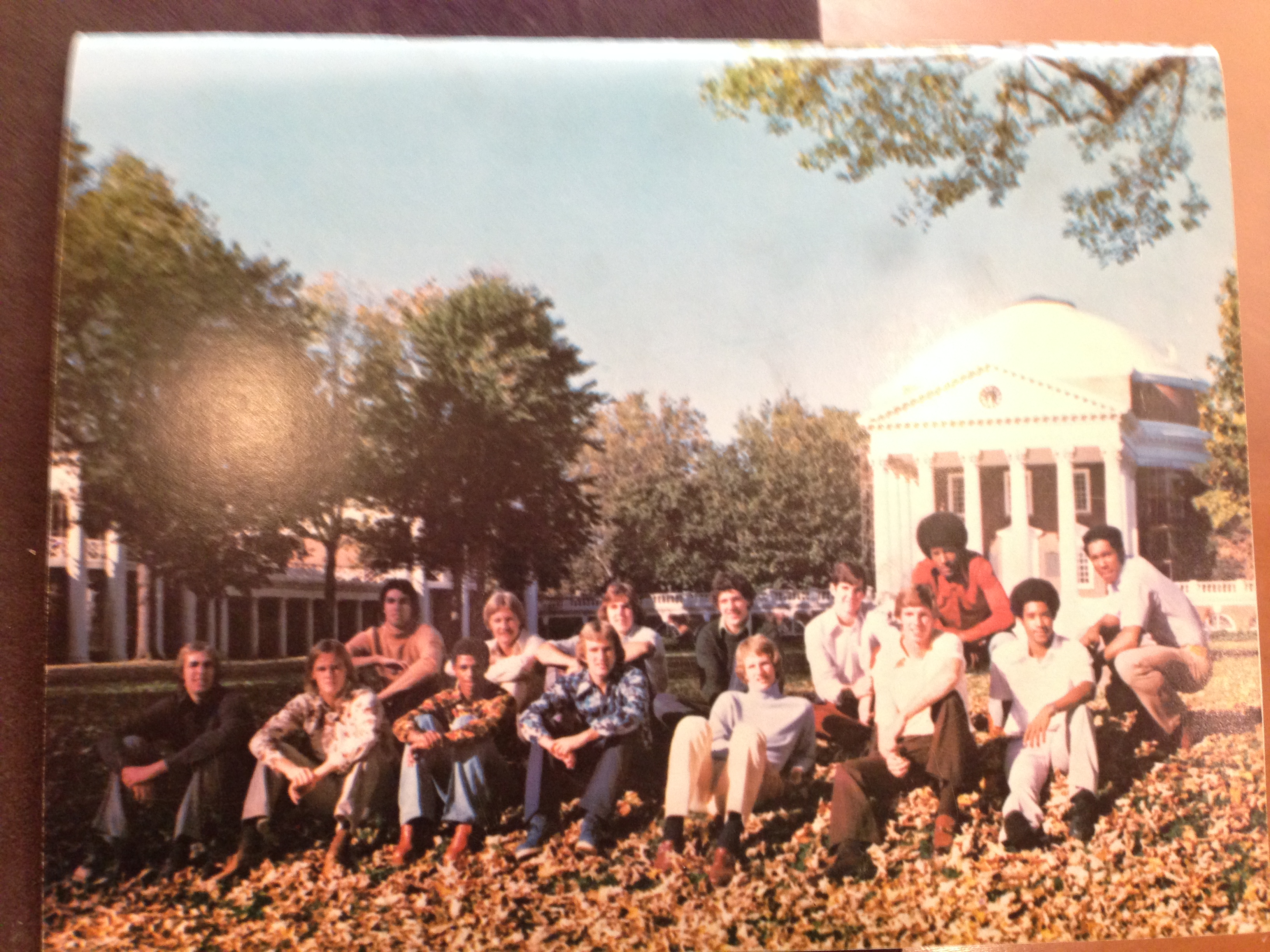 7. The Reign of Ralph Sampson 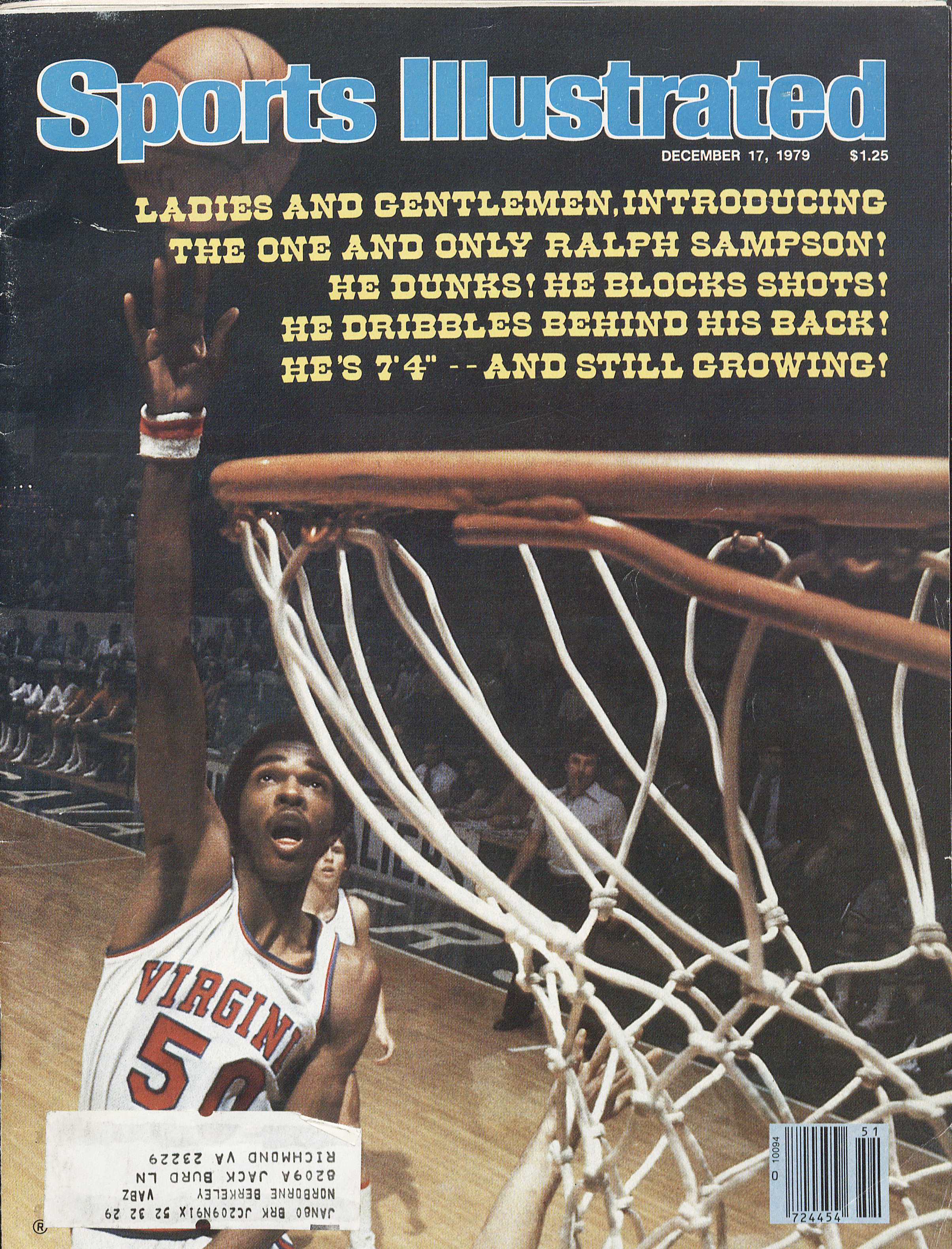 Towering over opponents at 7’4”, Ralph Sampson was a lot to love. He was one of the most heavily recruited college and professional athletes of the time and brought unprecedented character to the courts. This is one of six Sports Illustrated magazines whose covers Sampson graced; in it, the writers speculated on the unclear future of this towering 7’4” freshman. (GV885.43 .V57 K45 1979. Image by Petrina Jackson) 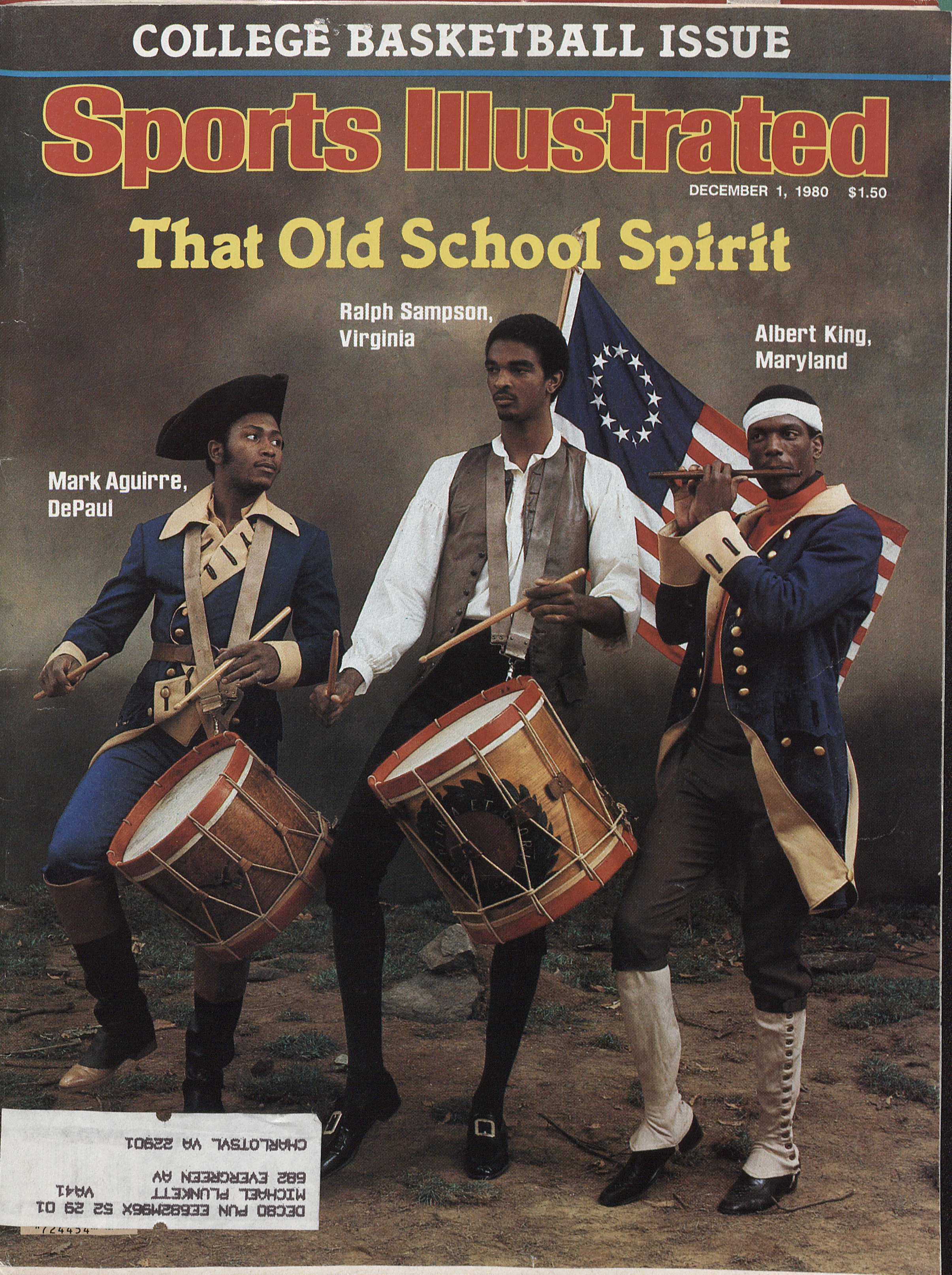 This is the story of three basketball stars who chose to stay in school rather than move on to the NBA after highly successful underclassmen seasons. There is a focus on Sampson’s overcoming of criticisms, particularly by frustrated NBA recruiters looking to draft their top pick and famed sports journalist Howard Cossell who claimed that “The University of Virginia, Thomas Jefferson’s School has a 7’4″ kid at the fifth grade level.” (GV885 .43 .V57 K568 1980. Image by Petrina Jackson) 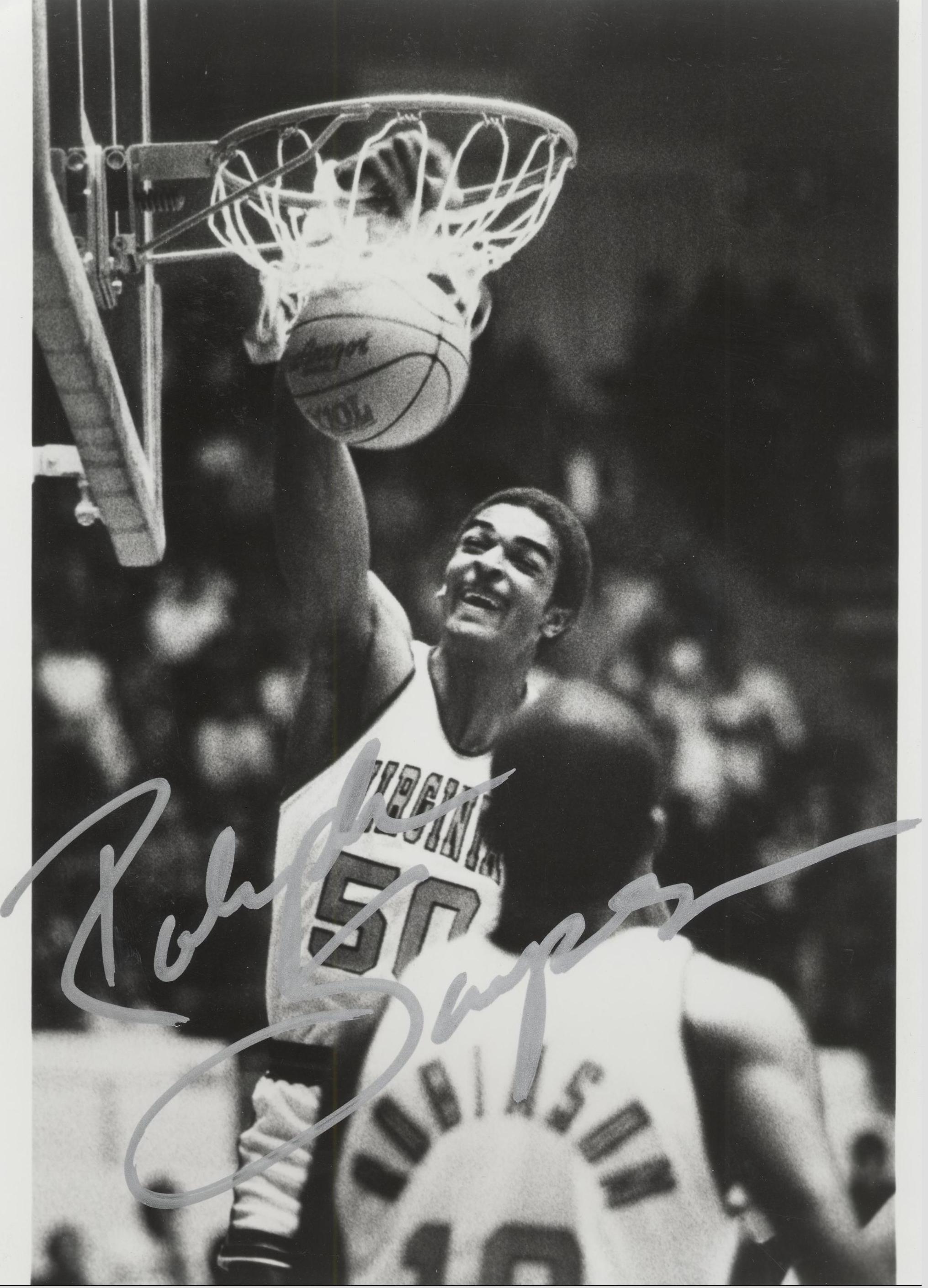 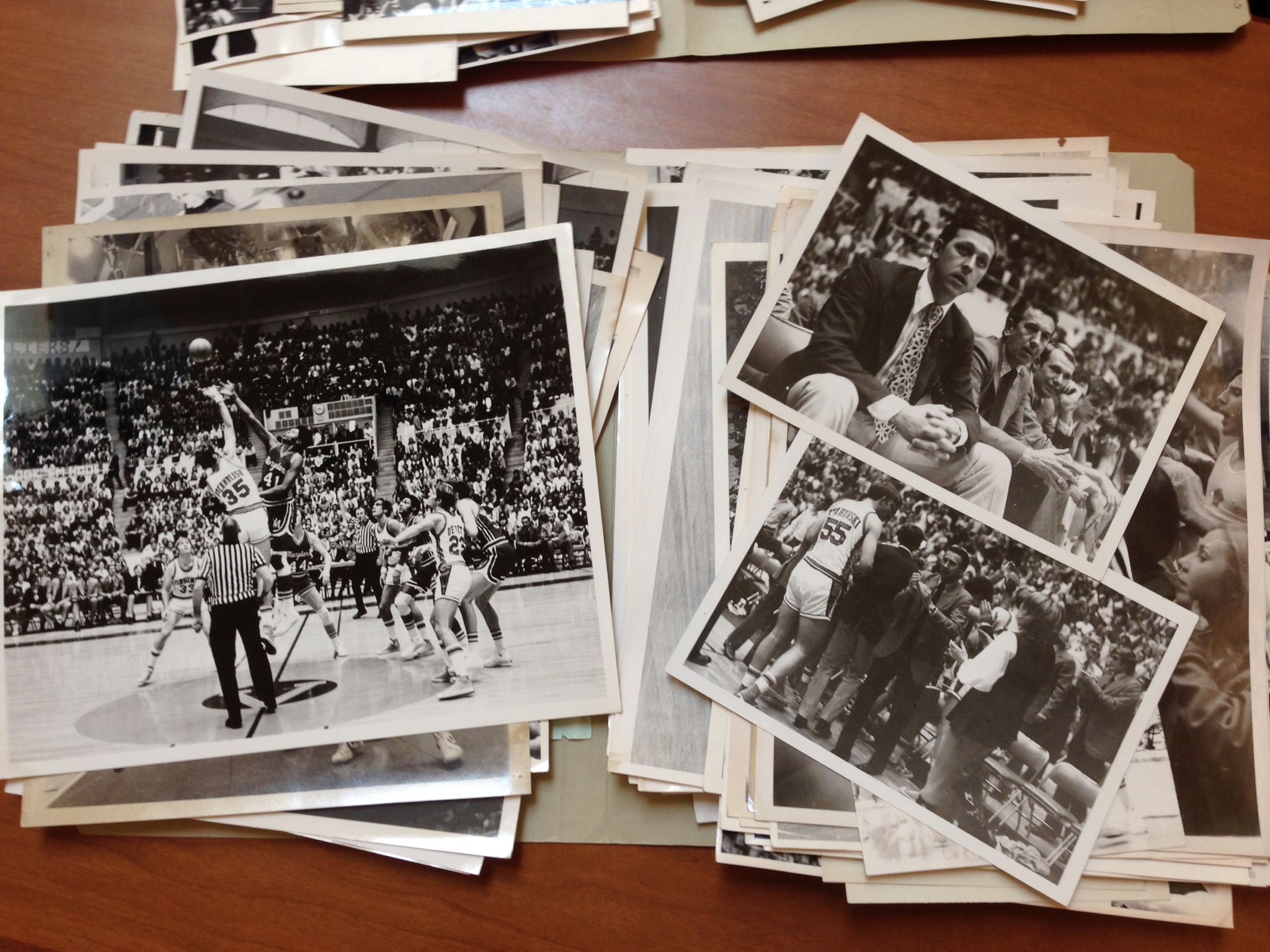 This endless stack of high quality images from the 1970’s editions of Corks and Curls is nothing short of addicting.  You simply can’t find anything this good online. Check out those Converses! (RG-23/48/1.841. Photograph by Garrett Gottesman) 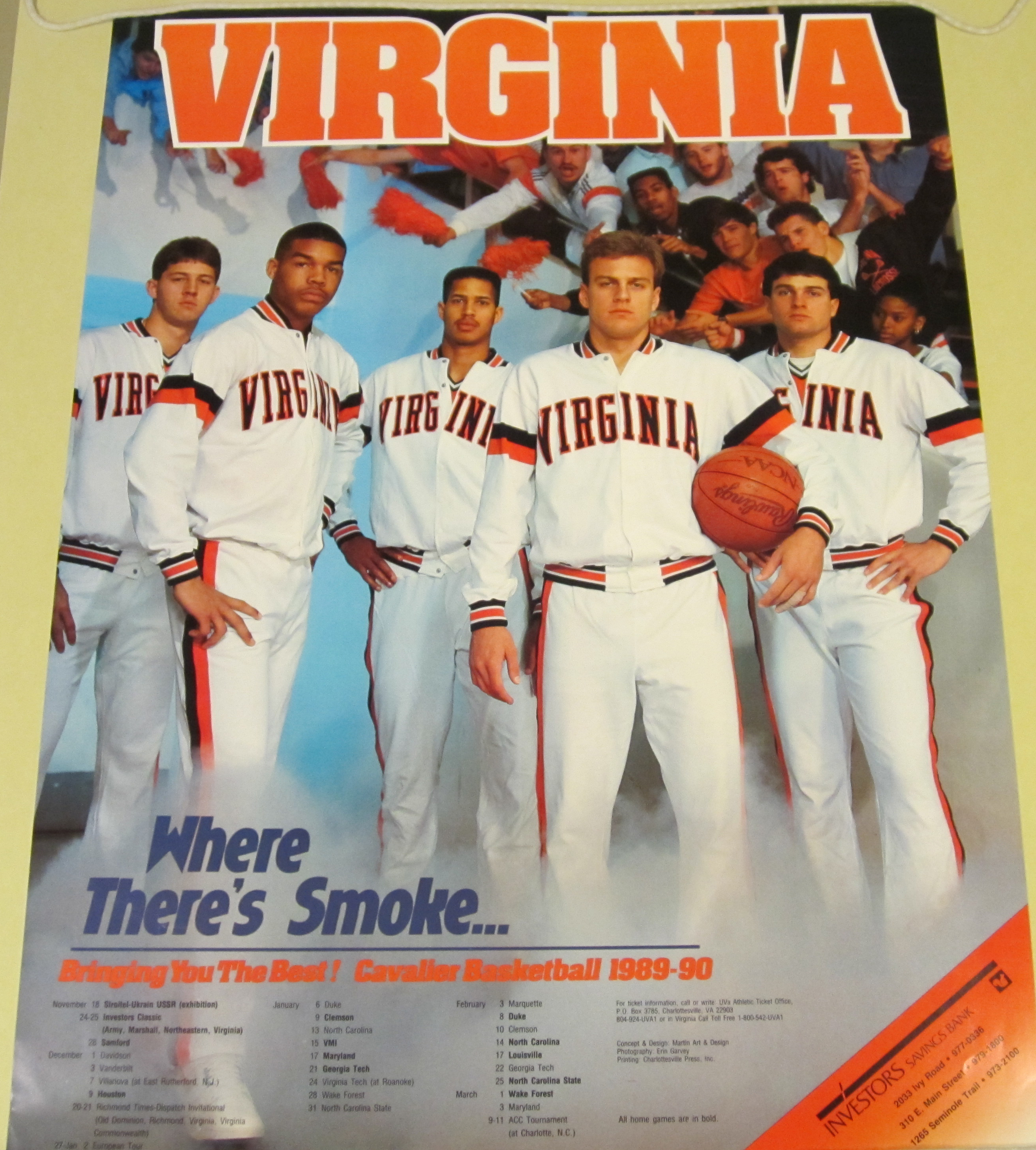 Nothing says intensity quite like grown men walking out of the smoke with their hands on their hips. If this doesn’t make you nostalgic for the 90’s, what will? (Poster 1980.U57. Photograph by Petrina Jackson) 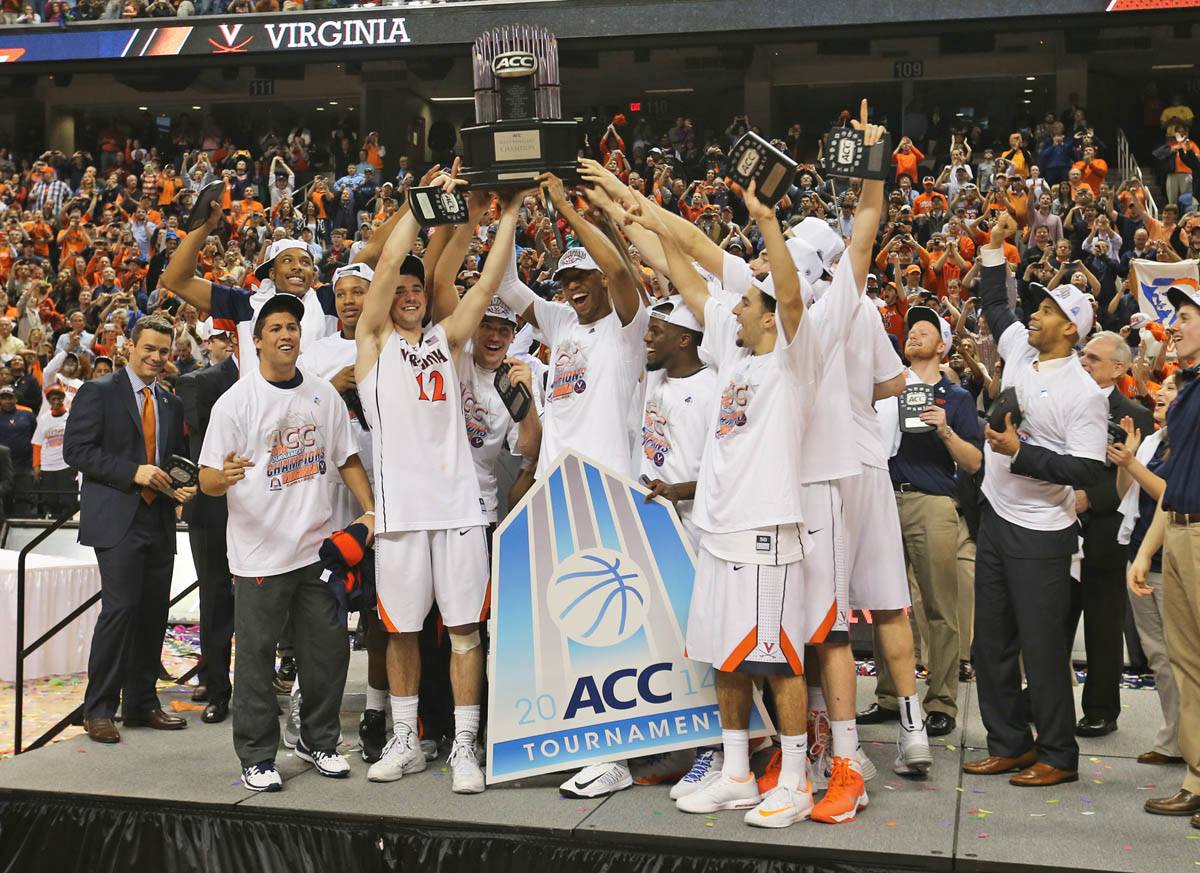 This year’s Cavaliers were nothing short of amazing. We had 30 overall wins, 16 conference wins, 15 home wins, the first regular season championship since 2007, the first ACC Championship since 1976, and the first Sweet Sixteen appearance since 1995. Long story short, the 2014 team was extraordinary and one that will forever be remembered in history.

One thought on “Top 10 Mementos of U.Va. Men’s Basketball”