Welcome back to the ABCs of Special Collections!  We are excited to bring to you, the letter 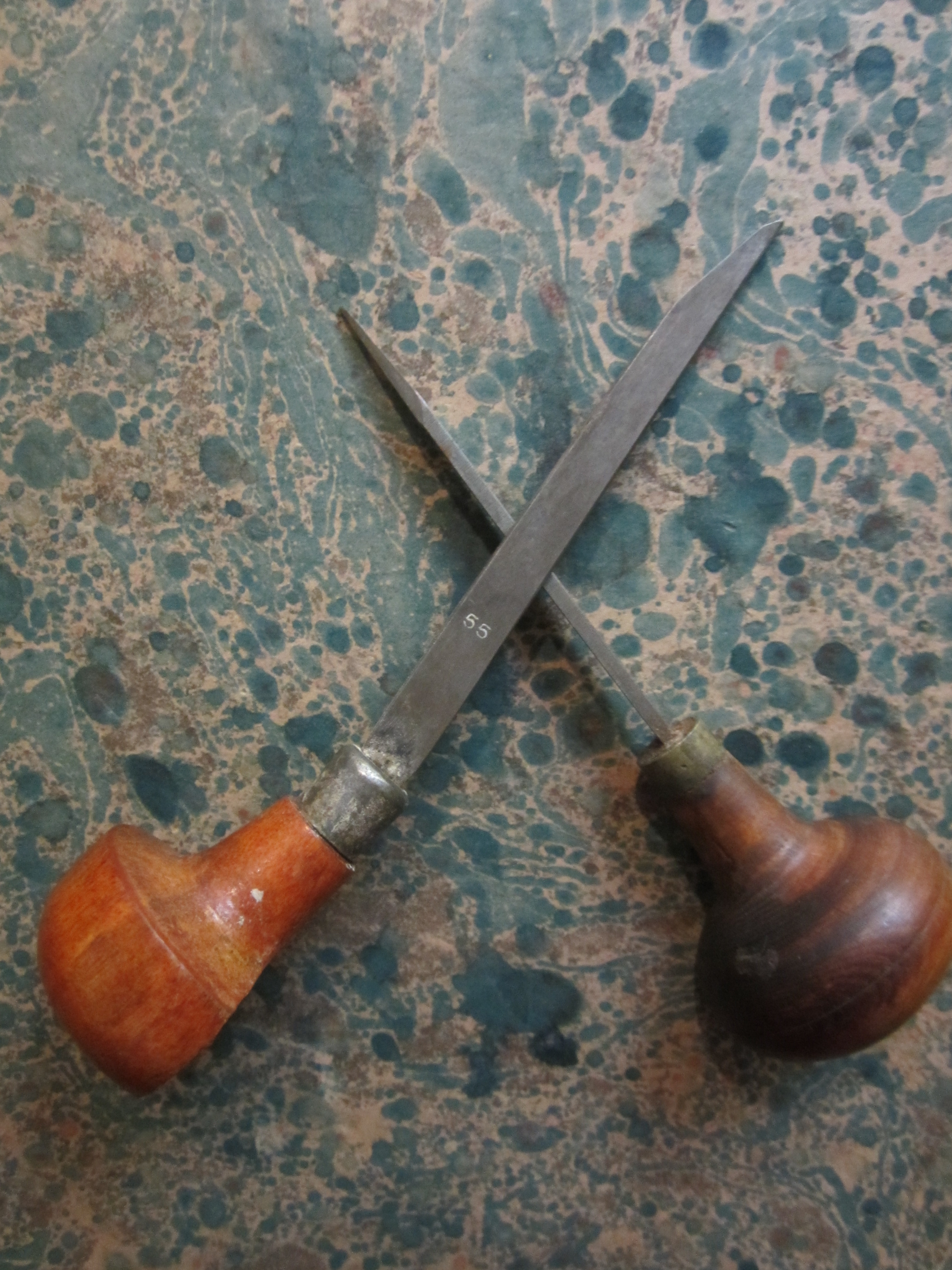 “X” made from two small blades from the studio of the Warren Chappell Studio. (MSS 10204-bc. Photograph by Donna Stapley)

X is for X-Rated

X is for Henry Miller’s banned book Tropic of Cancer, published in 1934 by the Obelisk Press in Paris. The book was deemed illegal for sale in the United States, Great Britain, and Canada upon publication and remained so for almost thirty years. In 1961, Barney Rosset, publisher of The Grove Press, convinced Miller to let him publish Tropic of Cancer, promising to fight censorship laws all the way to the Supreme Court. In 1964 the U.S. Supreme Court overruled earlier state court findings that Tropic of Cancer was obscene. This case was a landmark case concerning censorship, and opened the doors for a much wider acceptance of previously censored art. 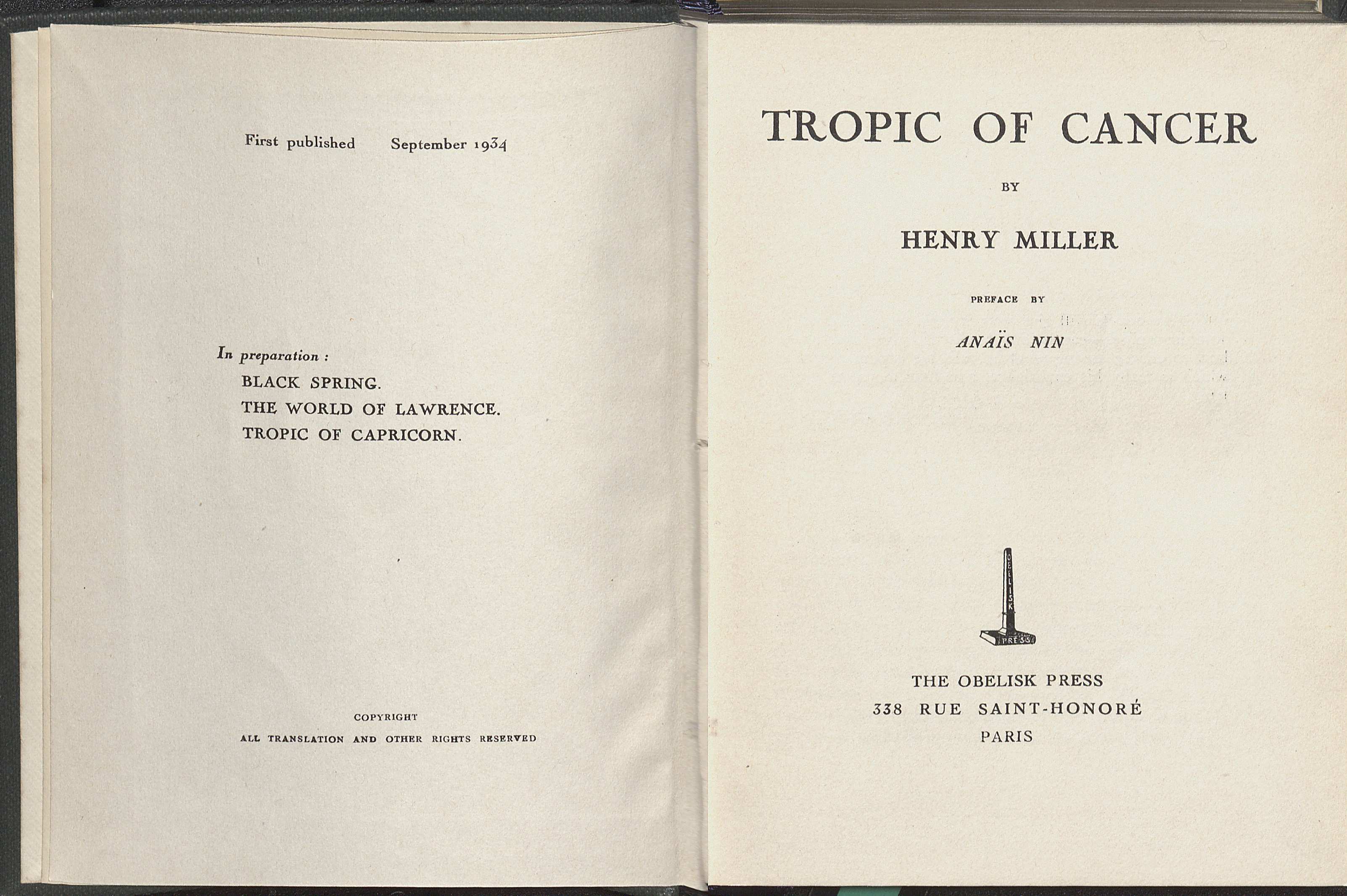 Very rare books indeed!  Dating from approximately 1450, xylographica are block books made by carving text and illustrations into wooden blocks.  Usually the books are not more than 50 leaves, and are considered incunabula, (as they date before 1501) and the content is almost exclusively religious in nature.

Donna Stapley, Assistant to the Director 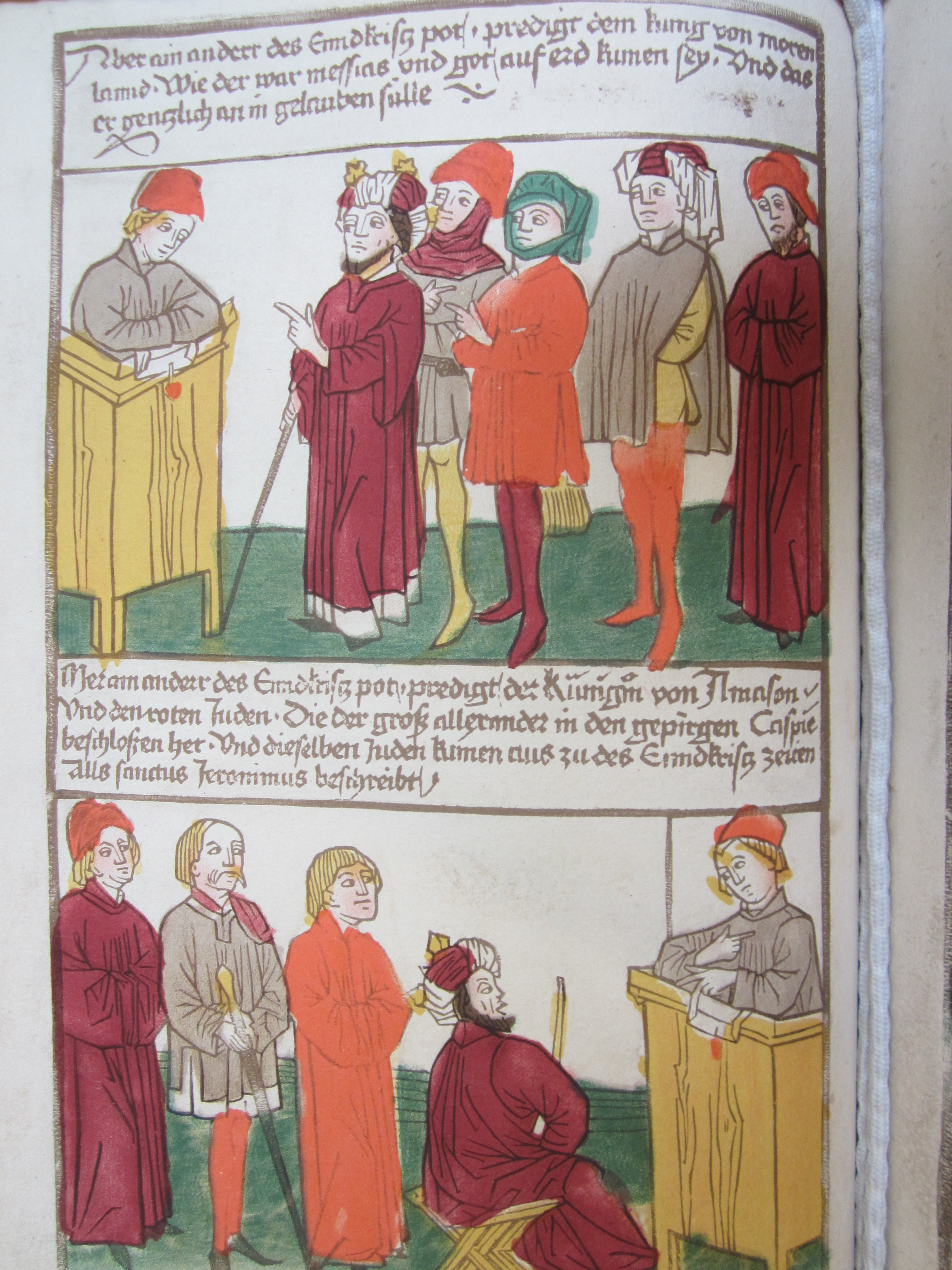 Facsimile of Das puch von dem Entkrist/Blockbucher. The original was made in 1450, and the facsimile was created in 1925. (Typ 1450 .A57 1925. Stone Typography Collection. Photograph by Donna Stapley) 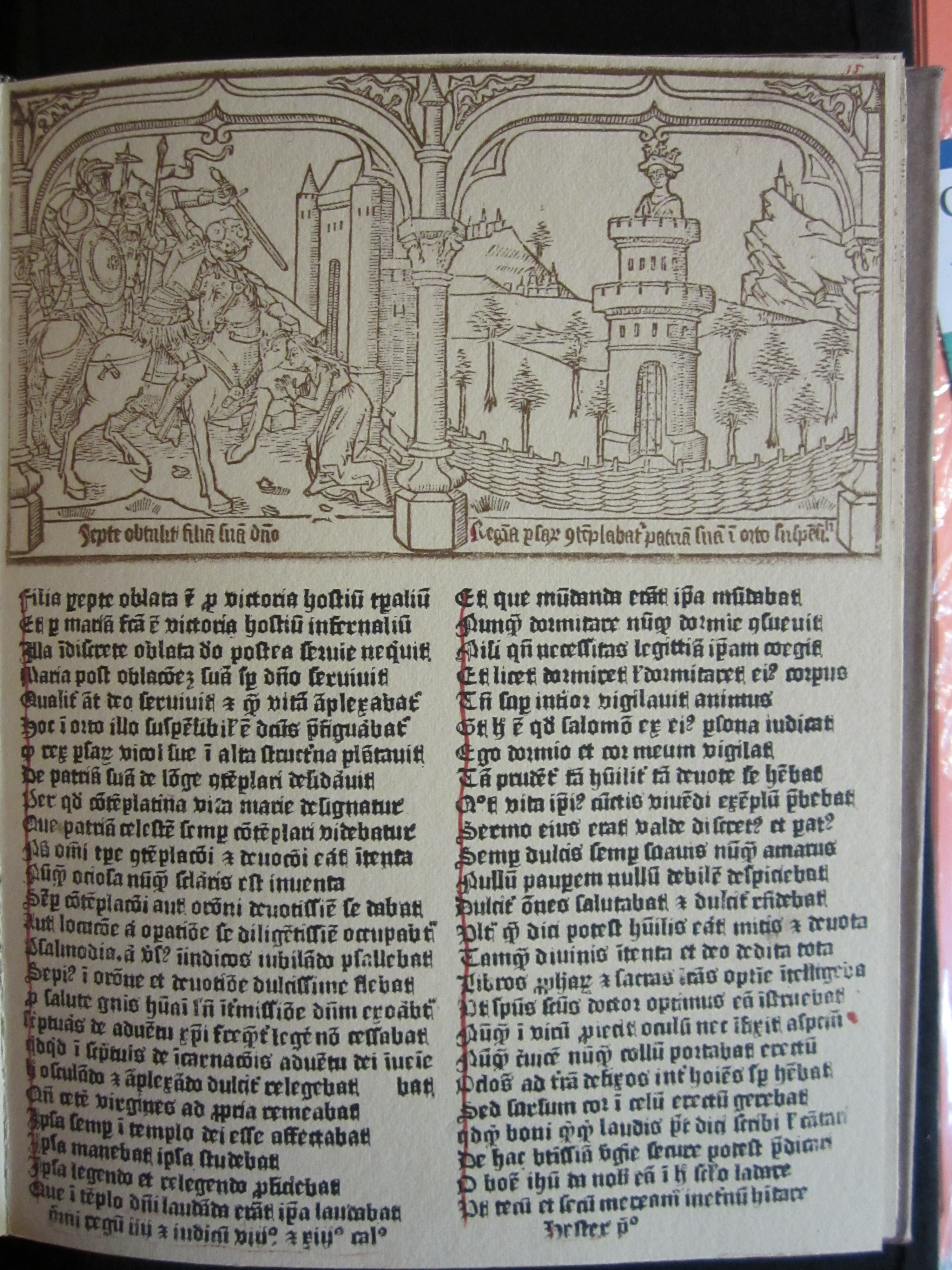 Facsimile of Ars moriendi. The original was made 1470, and the facsimile was created in 1910. (Typ 1470 .A77. Stone Typography Collection. Photograph by Donna Stapley) 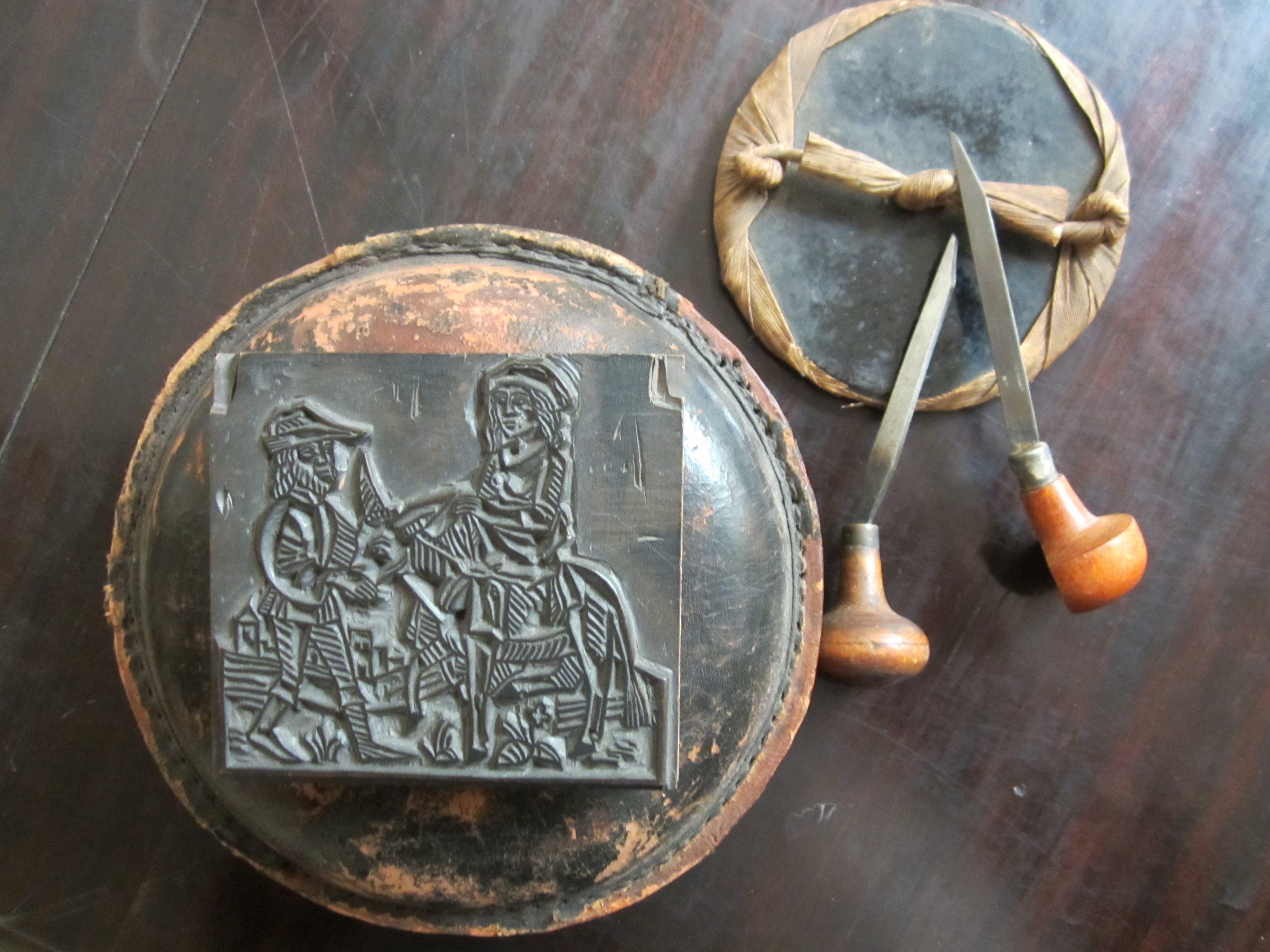 Of course, wood block printing has remained popular long after moveable type superceded the labor intensive process of producing xylographica.  For example, shown here are some wood carving tools from the 20th-century studio of Warren Chappell. Shown are a wood block and an engraving cushion, burnisher, and two small blades. (MSS 10204-bc. Photograph by Donna Stapley)

X is for the XYZ Affair

Charles Cotesworth Pinckney, John Marshall, and Elbridge Gerry were sent to France by President John Adams in July 1797 with instructions to renegotiate the 1788 treaty between the two nations, ensure French acceptance of the Jay Treaty, and resolve issues concerning the seizure of American merchant ships by the French navy. Charles Maurice de Talleyrand, French foreign minister, approached the American commissioners through agents who demanded bribes before formal negotiations could begin. Although such demands were not uncommon in European diplomacy of the time, the Americans were outraged and left France without undertaking formal negotiations. The publication of the commission’s dispatches (the letters X, Y, and Z, substituting for the names of the French diplomats) created a political firestorm in the United States that resulted in several years of undeclared naval warfare against France. 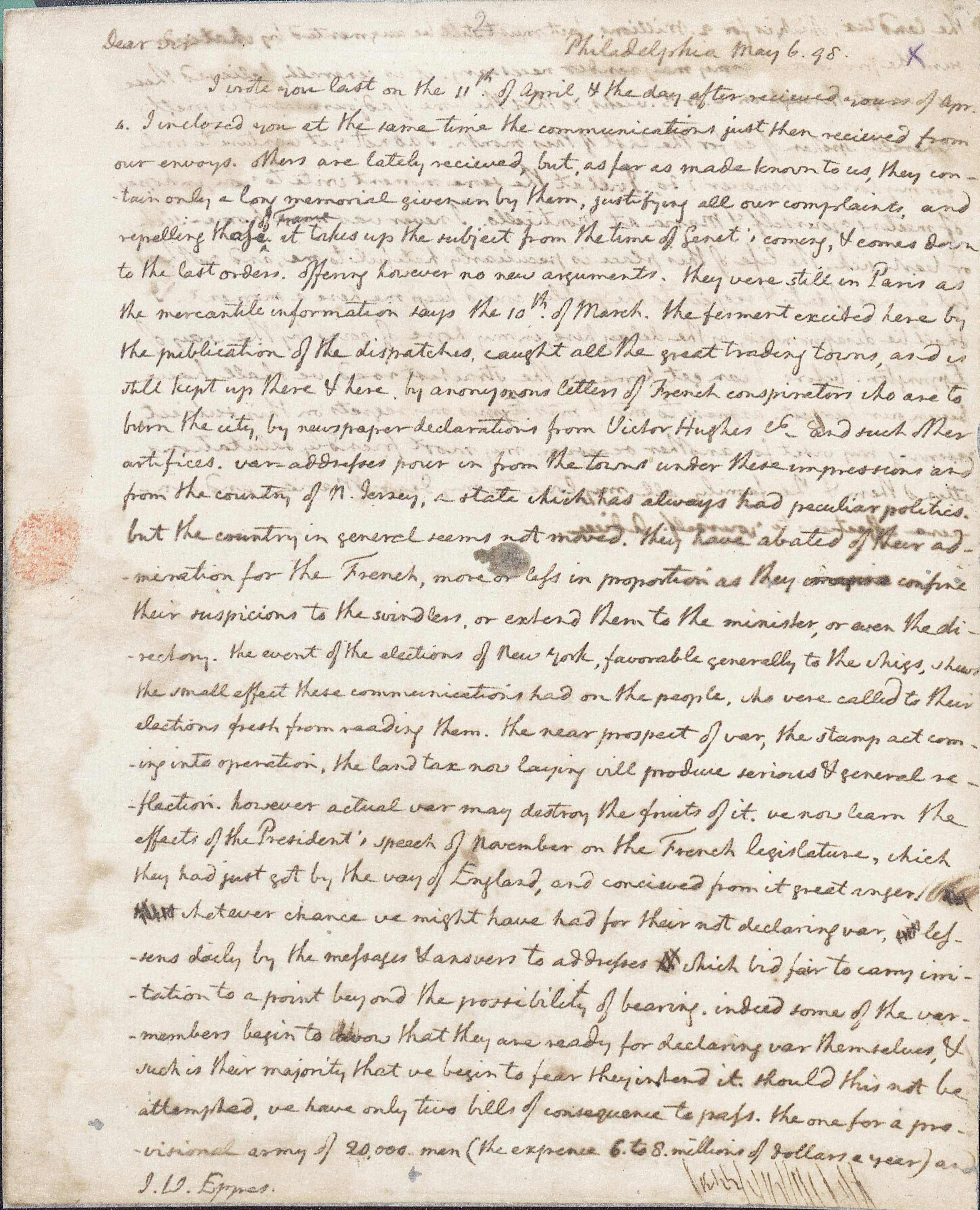 Thomas Jefferson to John Wayles Eppes, May 6, 1798. Jefferson describes the “ferment excited here [Philadelphia] by publication of the dispatches” and discusses the possibility of war. (MSS 501. Gift of Mrs. F.B. Stoneman. Image by Edward Gaynor) 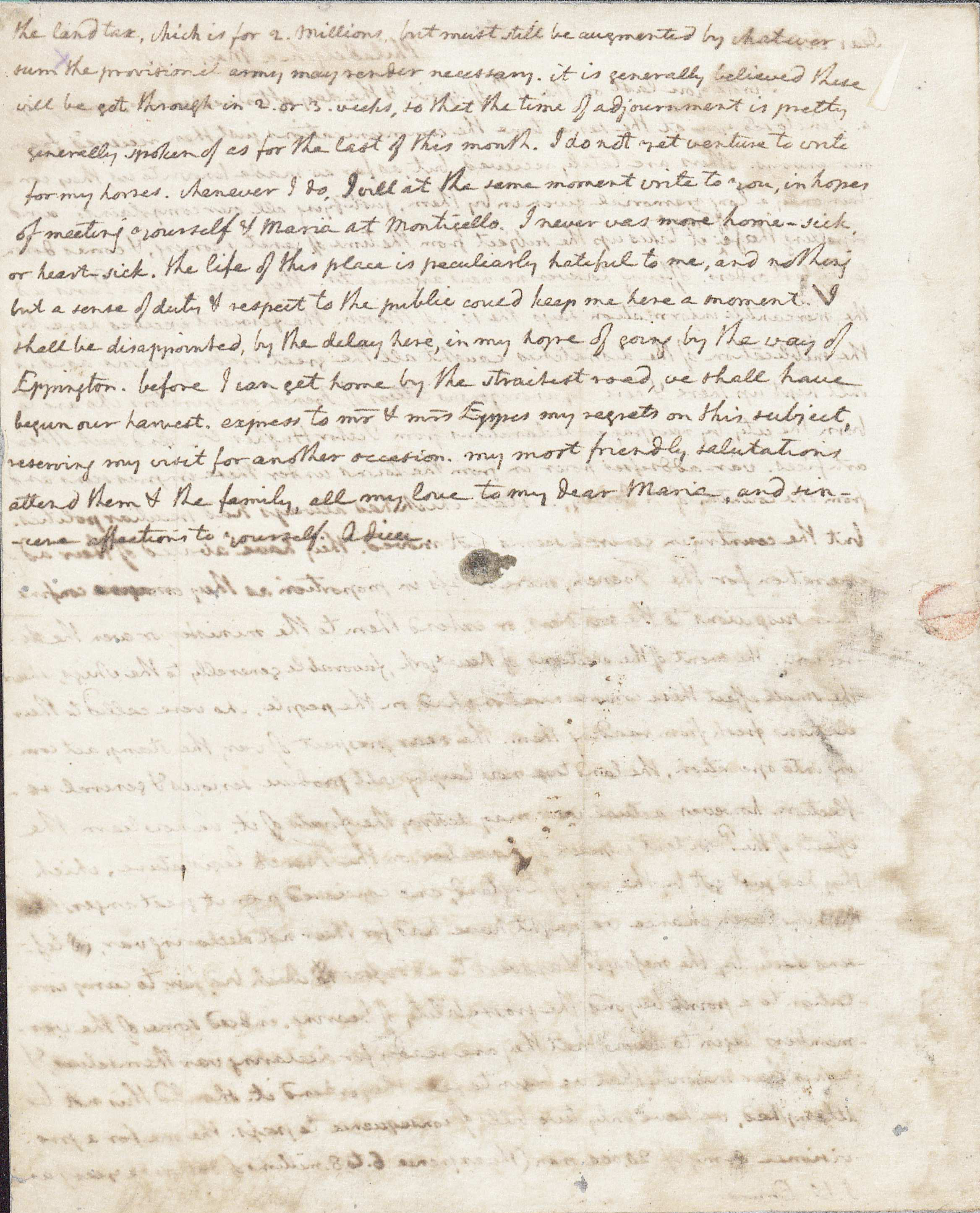 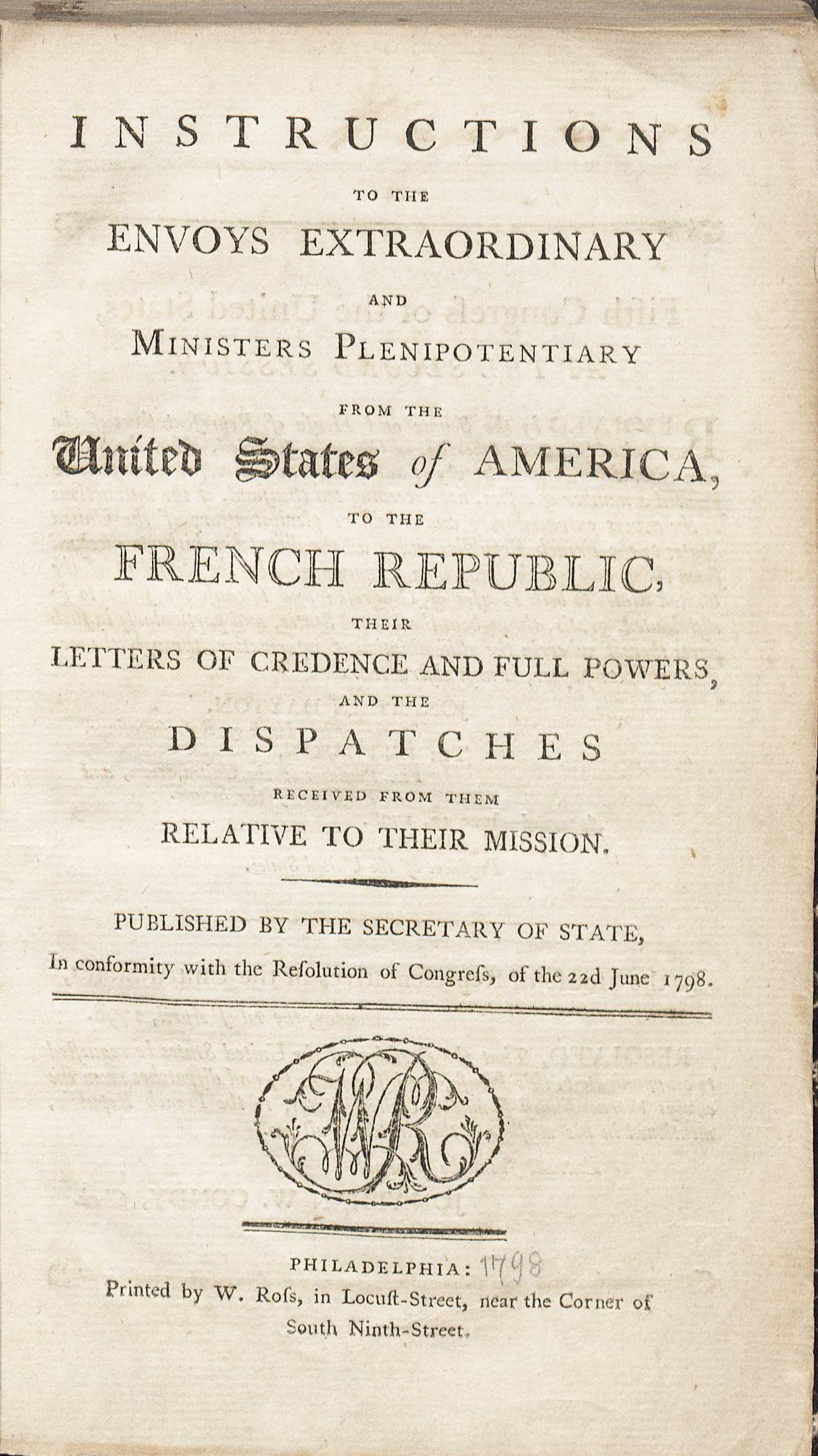 Title page of Instructions to the Envoys Extraordinary and Ministers Plenipotentiary from the United States of America, to the French Republic. (A 1798 .U54. Tracy W. McGregor Library of American History. Image by Edward Gaynor. ) 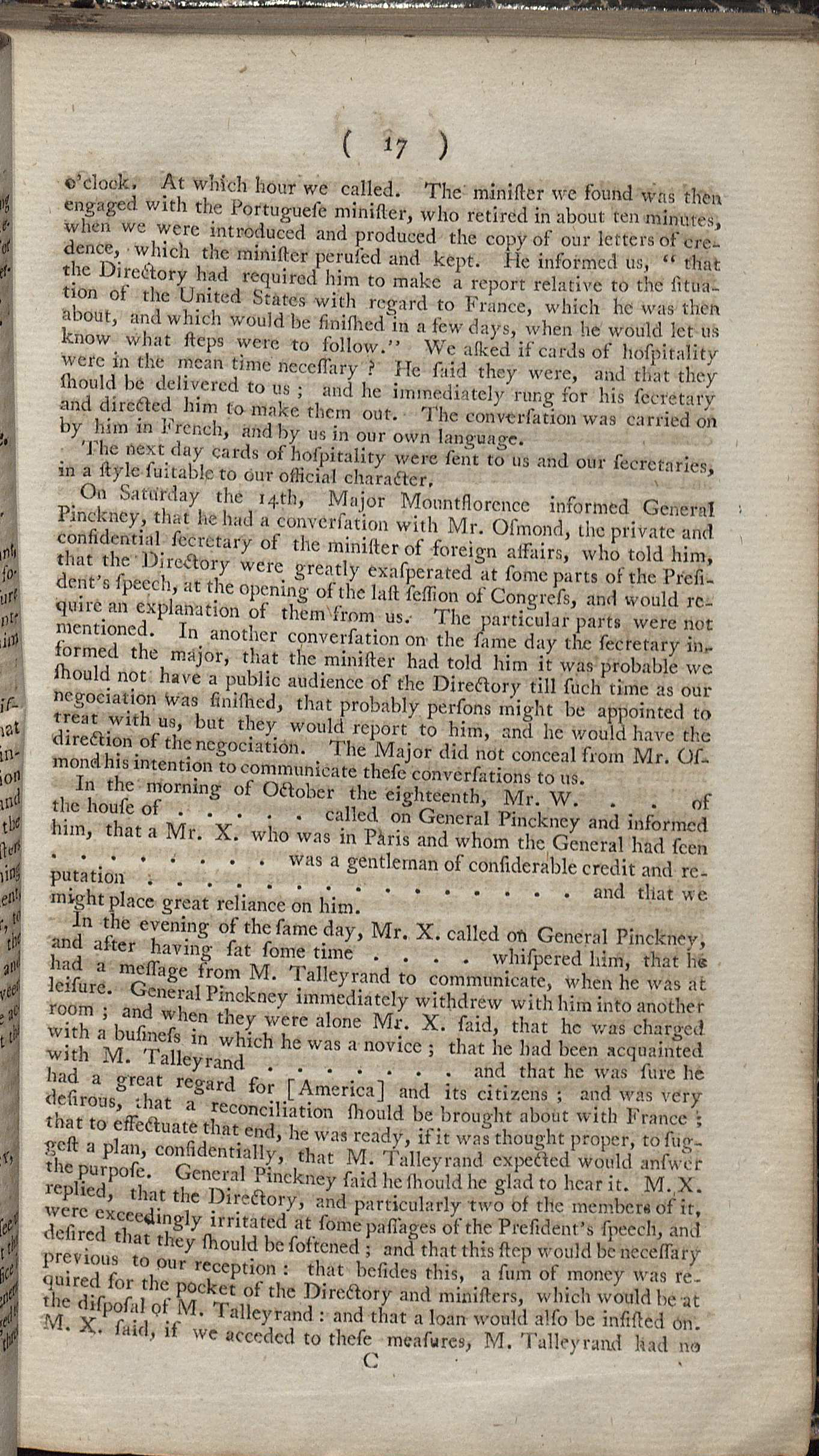 Page of dispatch describing request for bribes. (A 1798 .U54. Tracy W. McGregor Library of American History. Image by Edward Gaynor. )

Guess what we have in store for you with the remaining two letters of the alphabet? You will have to wait until next month when we feature the letters “Y” and “Z.”